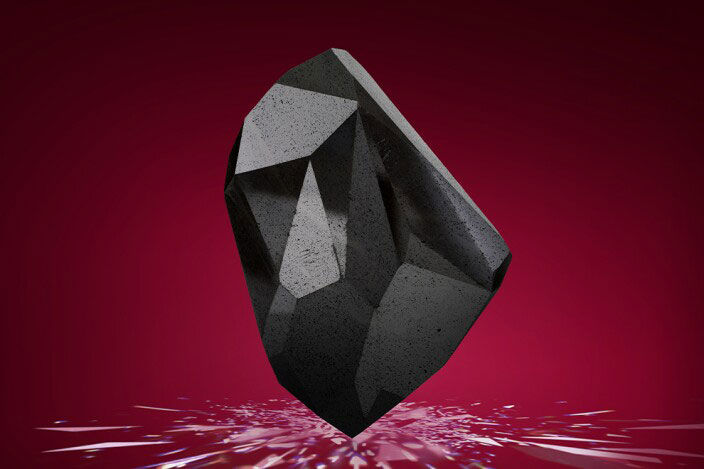 Diamonds appear in some of our most prized possessions, like engagement rings, necklaces, and bracelets, but the precious stones are more than just decorative. Each diamond tells its own story — which is especially true for the 555.55-carat black diamond unveiled by auction house Sotheby’s Dubai. The stone is believed to have come from outer space.

A 555.55 carat black diamond goes up for auction

While the true source of the rare jewel, which Sotheby’s has fittingly named “The Enigma,” is unknown, the black diamond was likely created either from a meteoric impact or from a “diamond-bearing” asteroid that collided with Earth. The history of black diamonds, also known as Carbonado diamonds, can be traced back anywhere between 2.6 to 3.8 billion years ago. Even more indicative of their storied pasts, these diamonds contain nitrogen and hydrogen—two elements found in interstellar space.

The shape of the diamond being auctioned off by Sotheby’s is inspired by the Middle Eastern palm symbol of the Hamsa, a sign of protection that also means “five” in Arabic. Sophie Stevens, a jewellery specialist at Sotheby’s Dubai, told The Associated Press that this number bears a great significance to the diamond. In addition to its 555.55 carats, the jewel contains exactly 55 facets.

The rare black diamond will be open for bidding online from February 3 to 9, and the auction house plans to accept cryptocurrency as a source of payment. Sotheby’s expects the diamond to be sold for at least USD 6.8 million. “Its sale represents a once-in-a-lifetime opportunity to acquire one of the rarest, billion-year-old cosmic wonders known to humankind,” Nikita Binani, a jewellery specialist at Sotheby’s in London, said in press release Monday.