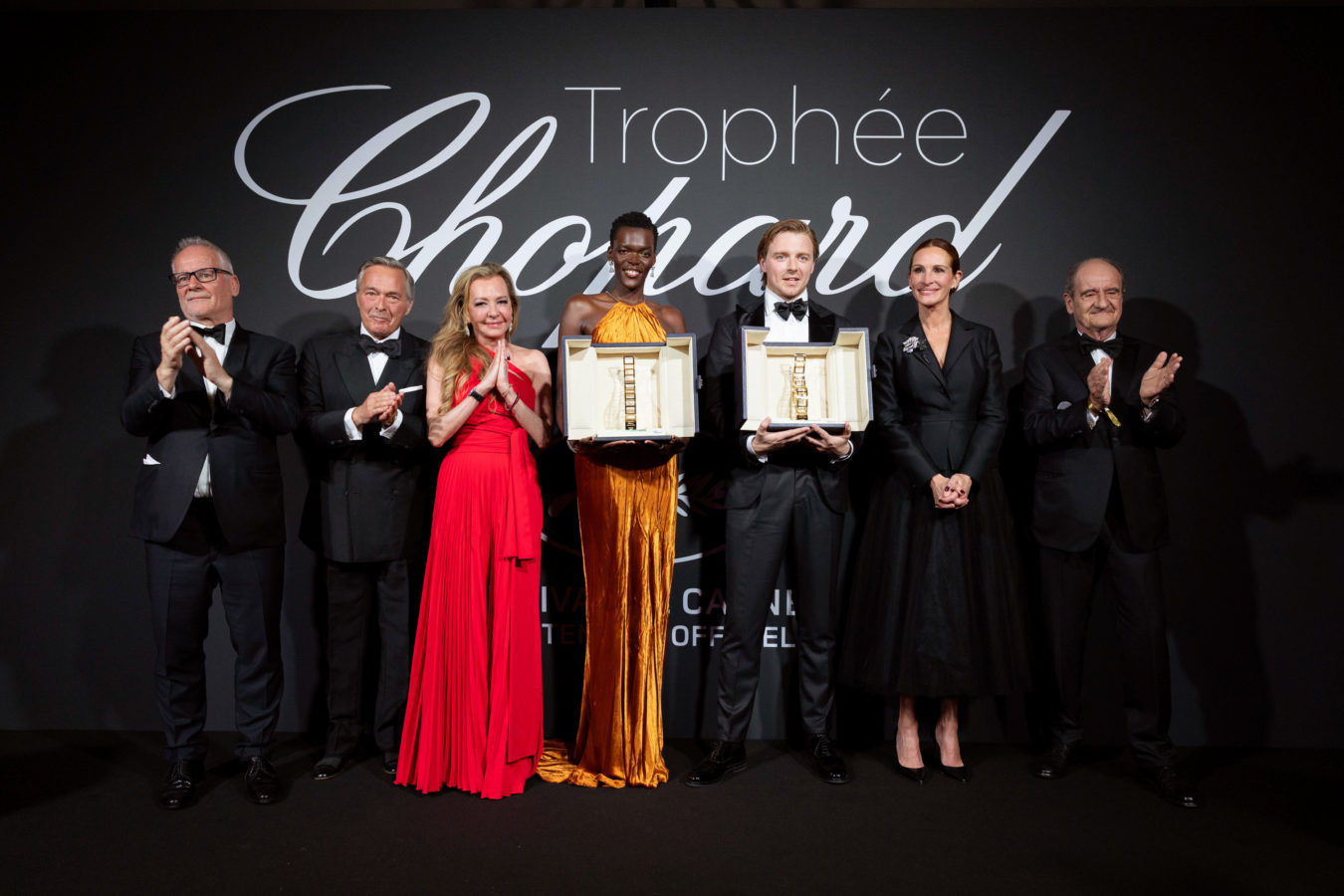 Chopard, which celebrates its 25th anniversary as Cannes Film Festival sponsor, presents the Trophée Chopard to breakout acting talents, whereby an actress and actor are awarded in an annual ceremony that highlights the new generation of international cinema. The award was created in 2001, at the initiative of co-president and artistic director Caroline Scheufele, and reaffirms the Swiss luxury brand’s unconditional support for creative filmmaking.

This year at the 75th edition of the festival, global movie legend Julia Roberts, assumed the role of godmother of the Trophée and presented the two winners: multi-talented Ugandan-British actress Sheila Atim and Scottish actor Jack Lowden with their awards at a prestigious gala dinner organised during the Cannes fortnight on La Croisette. The two winners were chosen by the Trophée Chopard Academy, made up of former winners, godmothers and godfathers of previous editions.

Roberts attended the event wearing a sophisticated tailored look complete with Chopard’s glittering Red Carpet 2022 Rose Brooch tucked into her satin lapel. The blooming black and white diamond-studded brooch is the first jewel of 75 pieces in the Maison’s Haute Joaillerie collection that is inspired by movie masterpieces.

Tropheé Chopard showcases more than two decades of support for cinema’s rising stars and its track record of awardees, many of whom fulfil an illustrious career in film in the years after winning, confirms the hopes that are placed in them. This list of incredible movie talents includes the likes of Marion Cotillard who won an Oscar in 2008 for her role in La Vie en Rose, Diane Kruger who was named Best Actress at Cannes in 2017, and English actress Florence Pugh who was nominated for Oscars a few months after winning the Trophée Chopard in 2019, among many others.

Scheufele commented: “Chopard loves cinema, and the Trophée represents an ongoing commitment by our Maison to guarantee the rise of new talent. Through this award, we bring an actor and actress, destined to perform in the films of tomorrow, to the attention of the entire film industry and the public. As is the case every year, I was especially moved during the award ceremony – in which the legendary Julia Roberts played godmother – to see the pride in the fact that their talent was being recognised on the faces of these brilliant actors.”

The guests enjoyed a dinner menu created and prepared by French chef Bruno Oger of the two-Michelin-starred restaurant La Villa Archange in Le Cannet followed by a concert with French singer-songwriter Jeanne Cherhal who performed songs from well-known movies.

Atim is known for her role in the Netflix film Bruised in which she stars alongside Halle Berry and this year’s Doctor Strange in the Multiverse of Madness. Her upcoming credits include Rober Zemekis’ Pinocchio and The Woman King with Lashana Lynch and Viola Davis. Meanwhile, Lowden’s notable roles include Dunkirk and Mary, Queen of Scots. He also stars alongside Gary Oldman in Apple TV’s Slow Horses and is currently filming BBC One Drama, The Gold.