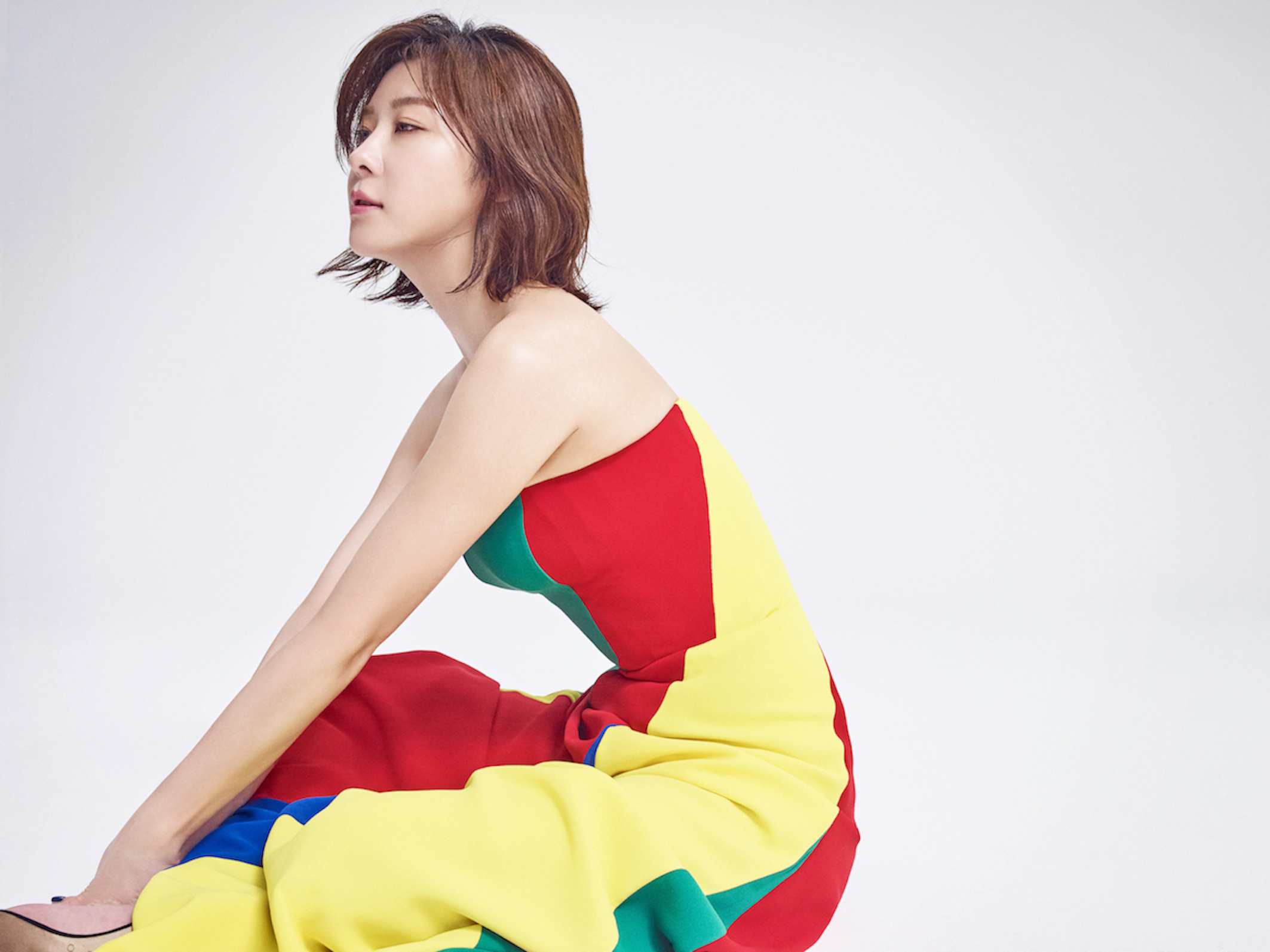 Ha Ji Won is being ushered into a basement studio somewhere in the bustle of Seoul’s Gangnam District for our cover shoot. Her fingers are outstretched as she walks in because we’ve asked her to paint her nails a dark forest green, and she’s complied. They’re manicured to perfection and she’s making sure they stay flawless as they dry.

Nevertheless, she bows to greet everyone on set and shakes my hand as un-gingerly as she can. “Hello, nice to meet you,” and with a disarmingly sweet smile she’s whisked off to be ensconced in puffs of powder and the whirr of hair dryers.

And that’s how I meet the queen of hallyu (Korean wave, or the rise in popularity of Korean culture around the world). Ha is a giant bestriding the hallyu scene. Mention her name to anybody who has had even the slightest brush with Korean entertainment and faces light up, usually followed by exclamations of “From Secret Garden!” (a 2010 TV drama series), or “Oh, Empress Ki!” (a 2013 Goryeo-period TV series in which Ha plays the titular role). But it’s hard to associate the actress with one particular defining work. Now in her 22nd year performing on the small and silver screens, she’s starred in too many hits to mention them all,

Glance over her oeuvre and her proclivity for playing strong female characters soon becomes apparent. In a society that celebrates and reveres hyper-femininity, Ha is the singular A-list actress able to act across genres from melodrama and horror to action and martial arts, earning the respect of a society that venerates the opposite of what she gravitates to in her work. It’s a quality that appeals to both men and women, and which no doubt contributes to her unshakeable position in the industry.

So, given that my context is the Ha Ji Won of Empress Ki or even the unassailable female detective Jang Chae Ok in Damo, a 2003 period TV series so feverishly well received, hard-core fans across Asia named themselves Damo pyeins (basket cases), I expected more of a dragon or, at the very least, a diva, rather than the fresh-faced, smiling woman shaking my hand. With her glowing skin she looks at least a decade younger than her 39 years.

Ha is aware of what she represents, and she embraces it. “I’m very grateful that I’m regarded as a role model for strong, empowered women,” she says. “I’m so glad that women respond well to my roles and it’s a privilege to have female fans.

“In one of my television series, Secret Garden, I played Gil Ra Im and I think that character really resonated with a lot of women. I think they felt vindicated and supported, because that character showed audiences that it’s good to be empowered and strong instead of merely relying on good looks or a beautiful figure. I personally feel happier and more excited when I play bolder female characters.”

Ha more than measures up in the face and figure stakes, yet seems to possess not an ounce of vanity – she’s appeared on reality television having just woken up, with nary a suggestion of make-up on her face, filmed straight out of bed – and as for her figure, her usually active roles keep her in shape. She’s been cast as a professional athlete in the 2012 film As One and acquired a scuba-diving certificate as part of her training for 2011 sci-fi movie Sector 7, but does she feel pressure to continue the fitness regimen when she’s not preparing for roles?

“I’m making an effort to lead a healthier lifestyle now compared to the one I led in the past,” she tells me with a rueful smile. “I used to eat a lot of bread and desserts. Those were total staples but now I’m working on eating healthier and working out more.”

This strikes me as rather amusing, as I’d been told earlier that chocolates had to be bought for the shoot as they were Ha’s absolute favourite, so I’d brought over a packet of m&ms, which I’d placed near her for the interview. At this point in the conversation, my hand slides the as yet unopened bag away from the star. She sees me placing it out of reach and, grinning, reaches over to draw it back towards herself. Celebrities. They’re just like you and me.

“It’s not so much that I do it to look pretty,” Ha says. “I think it’s a priority to stay healthy for work so that I can feel and look happy when others see my face.”

The idea of the body as an instrument is fundamental to Ha as an actress. Besides keeping it in optimum shape for her more active roles, it is, above all, a medium to communicate. Inspired when she was younger by veteran Korean actress Go Doo Shim, Ha speaks of a transcendental moment where she witnessed the magic of acting, “It thrilled me that she was able to affect the emotions of her viewers and it made me curious about being an actor, to be able to make an audience laugh, to move them, to motivate them.”

For Empress Ki, Ha’s preparations were meticulous. “There aren’t many historical records about Empress Ki, who was a real person in Korean history,” Ha says. “Within the plot she’s a powerful figure, so I wanted to portray her in the most convincing way possible. To make audiences engage with her and with the plot.

“I invested a lot of time working on the tone of her voice, her footsteps as she grew from a tomboy maid to a powerful regent. I took ballet lessons for comportment. She’s quite a gender-neutral character, so it took some work to decide on how she should move and what her gestures would convey.

“I created these playlists for myself in order to get into the Empress’s different frames of mind and I had perfumes for specific moods. I even went online to play these games where I could get a better sense of what costumes from the era were like. And because there aren’t many historical records, I looked at royalty across ancient China, Japan and Korea and blended them all to create this character. It felt like I was travelling back in time for a fantasy trip.

“A lot of what ended up on screen in the end was from my research. The crew really took my recommendations on board, from make-up and hair to props. If you look at her make-up, her eyebrows stretch further and further to her temples as she grows in power. It got to a point where we had to watch the length for fear that it would look too crazy.”

Her joy recalling the process is visible as she speaks and her dedication to her art comes from a place of both generosity and indulgence. If Ha’s in the business of making dreams come true for us, her work does a similar thing for her. The dream, for Ha, is neither fame nor fortune – though if it were, that would definitely have been fulfilled by now.

It is, rather, to be given the privilege of living life through a different lens. “The very first thing I look for in a character when I read a script or a synopsis is whether I want to lead that character’s life,” she says.

“Whether it be a drama [Korean-speak for television series] or a movie, I want the character to speak to me first. Because only if it’s compelling to me will I be able to speak to audiences as that character.”

Ha is a disciple of that well-known Confucius adage about not working a day in your life if your job is something you love. “I think the happiest moments of my life are from when I’m acting,” she says. “It’s what keeps me moving and I keep acting because being able to act motivates me to keep moving forward in life.”

Which is not to say that Ha’s so omnipotent she doesn’t find it really hard when the going gets tough. “I generally approach movies and dramas the same way, but shooting Korean dramas can be rough,” she says. “When I was working on Empress Ki, I was fortunate to have a lot of scenes, but that also meant that there were stretches where I could only sleep three hours a week.

“I developed blood-circulation issues and I needed acupuncture for my legs and my head to draw out blood and help my system function. To be honest, there were times when I was shooting Empress Ki I seriously thought I was going to die, I was so tired.”

At this point, I ask that finicky question journalists love to ask, and one that creative subjects are loath to answer: what’s the most rewarding role you’ve ever taken? Ha gives a conspiratorial smile. A veteran at this point, she knows what I’m up to.

“I play a genius surgeon in my most recent drama, Hospital Ship, which I worked on for six months” she answers. “The main role, my character, saves people and it gave me a very real opportunity to consider the implications and significance of being able to save even one life.

“That drama gave me the chance to learn about the value of human life and to experience how rewarding being a doctor or surgeon must be, to be able to save people’s lives every day.”

I’m left with enough time to ask one last question and I choose one far away from the now well-covered ground of her illustrious career. Fast-forward 50 years to when Ha is a grandmother. “This is so exciting!” Ha exclaims, her hands covering her laugh.

Her granddaughter asks for a bedtime story from grandma’s life. What story does Ha tell? “A love story” she exclaims immediately. I sit up a little straighter. What does this mean? “This means, I will tell her a very beautiful and romantic love story,” she says. “Because I have always wanted to have a very wonderful love story of my own, only later on.

“That’s what I really want. So I’m making a promise here, a commitment to myself – because I want to be able to tell her a really wonderful love story when she asks for one in the future. I’m going to do my very best to make this love story happen.”

With that, time’s up. As we say our goodbyes, where many can only give their best wishes to the showman with an industry standard “break a leg”, it seems refreshing to be able to wish Ha all the best in her pursuit of love with “good luck.”