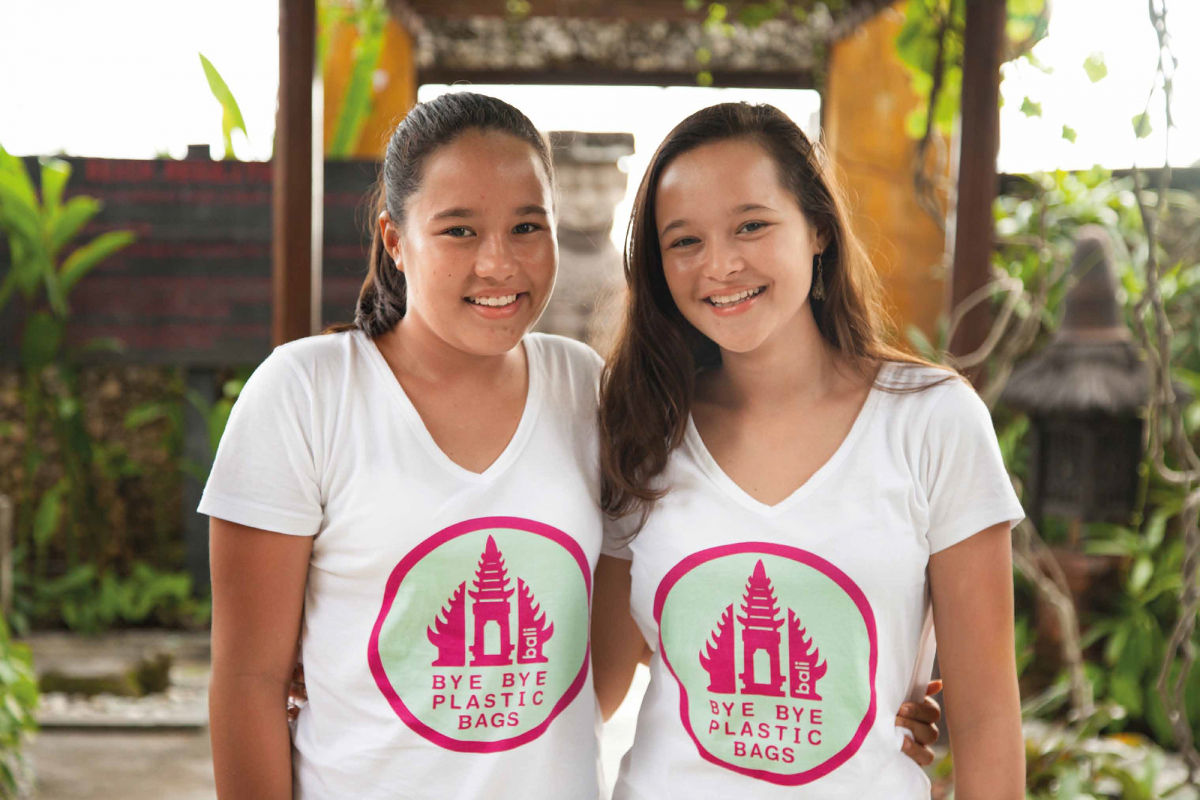 Bye Bye Plastic Bags, a movement started by teenage sisters Melati and Isabel Wijsen, has spread from Bali to the world. They told Ajeng G. Anindita why they hope everyone, will say no to plastic, including President Joko Widodo

Following their exit from their jewellery business and inspired by Al Gore’s film An Inconvenient Truth, John and Cynthia Hardy founded Green School in Bali in 2006. Their idea was to create an inspiring example of education for sustainability. Among the students at Green School are Indonesian/Dutch sisters Melati and Isabel Wijsen. Seventeen-year-old Melati and Isabel, 15, are the founders of Bye Bye Plastic Bags (BBPB), a movement they launched five years ago to clean up Bali’s beaches, rivers and streets.

At first, the girls were ignored by the Bali government. But after a trip to India and a visit to Mahatma Ghandi’s house, they started a hunger strike. Governor Mangku Pastika was so impressed by their sincerity that he signed a memorandum of understanding to help the people of Bali say no to plastic bags. Melati and Isabel have travelled around the world with their message, including to London where they delivered a TED talk, and to New York, where they appeared at the United Nations. BBPB, meanwhile, has gone global, giving rise to more than 25 new groups in Indonesia and international cities since 2016. Highlights of an interview:

You started your campaign at a very young age.

Melati: Yes, we wanted to create positive change and we didn’t want to wait until we were adults to do so. Born and raised on the island of Bali, we saw enough challenges surrounding us, like over-development and infrastructure. But the plastic waste problem was the one that stood out the most to us. Plastic is everywhere – in the streets, rivers, rice fields, beaches and ocean. We wanted to stop it. Saying no to single-use plastic bags was an easy first step, in our minds. And we still believe it is.

Do people underestimate you because of your youth?

Isabel: At first maybe yes, but after five years of campaigning we are taken seriously now. It also helped to make adults look at us in a different way. As our intention was pure, without a hidden agenda or business plan. Maybe they thought we would not stay for long, but commitment, consistency and not giving up has made everyone open up to our campaign on all levels. Besides, it makes sense of what we say and do. And the young age has always been a positive, surprise weapon!

Melati: Yes, we are enormously proud and excited that we have been an inspiration to over 25 teams in the world. And they are all driven by youth, just like us. It has been an amazing journey and today BBPB is so much more than just saying no to single-use plastic bags, and also to straws and bottles. It has become an international platform where youth have their voices heard. Youth empowerment has become an important part of our campaign.

How do you educate people to say no to plastic?

Melati: First, we have to make them aware of the negative effects on humans and the nature of plastic. That’s why we have a booklet in Bahasa Indonesia for elementary schools. As we know, real change happens here. Then make sure they know about the alternatives. Bring your own bag when you go shopping. This way you can say no to every plastic bag offered to you.

Isabel: Personally, we have not used a plastic bag for the last five years. And it’s very easy. It would help if there was a charge for every single-use plastic bag handed out – say Rp 5,000. Then everybody would bring their own bags, no? It’s that simple, and it has worked in 42 countries all over the world – from rich countries to poor ones. So why wouldn’t it work here?

Melati: For me, it would be our talk in front of world leaders in the Great Assembly Hall of the United Nations in New York. But we have had many different moments at a local and international level. We are grateful for all of them. Even the bad ones, as they have been our school of learning curves. Our next big moment would be if President Jokowi would give the go for a no to single-use plastics.