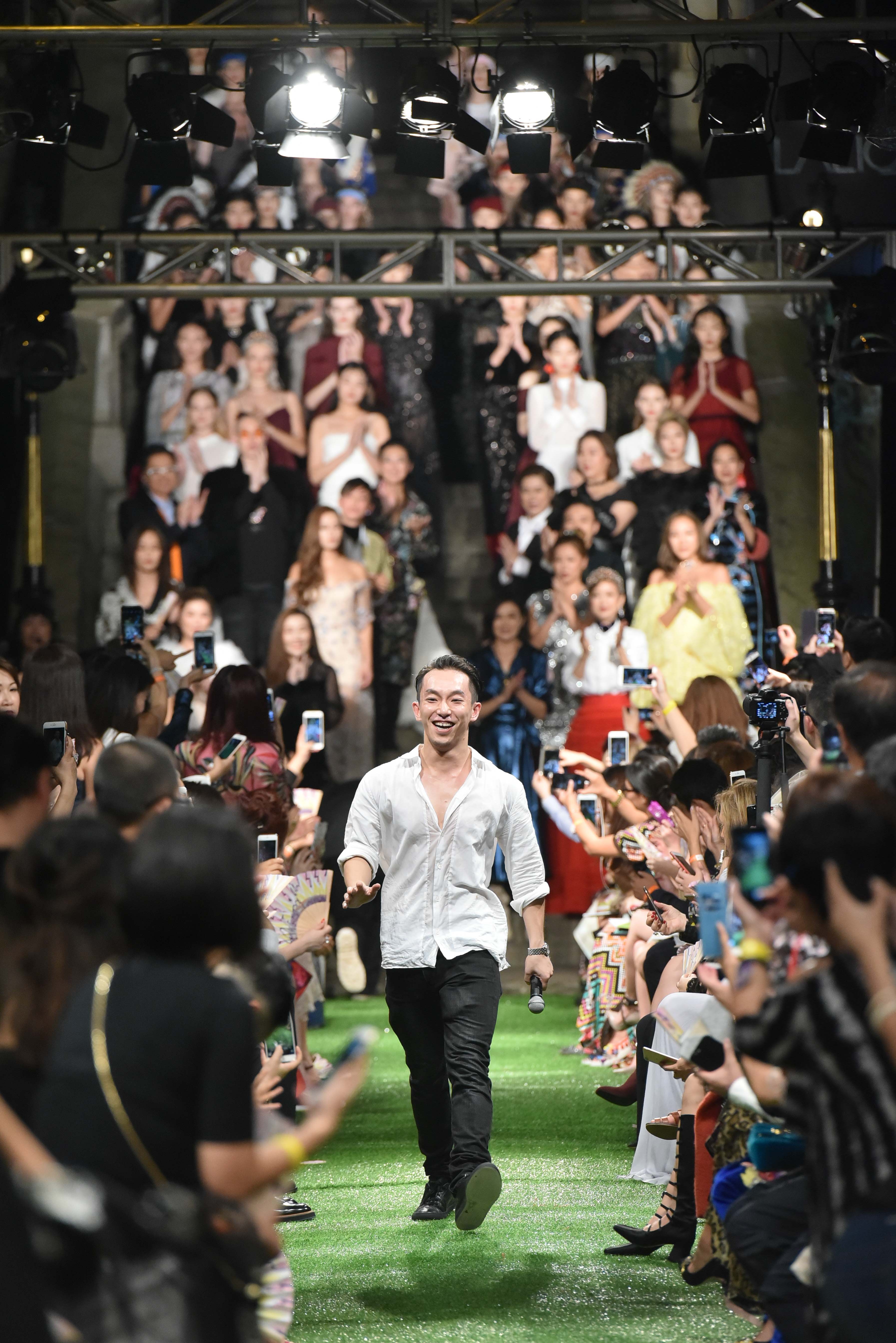 We need to rewind the clock a little for this week’s column, as I must mention the incredible effort and scale of Harris Chan’s autumn/winter 2017 Moiselle presentation, held on September 16 on Duddell’s. His able crew took over the entire street, which was cordoned off by guards and police so that Hong Kong and Macau’s most notable names could turn out unmolested for what was possibly the hottest event of the season.

At the post-show party held at The Printing House, we paused to congratulate the visibly nervous model citizens. “I’m melting in the heat,” said Tiffany Chan, “but I’ve got to wear this [multi-layered heavy winter ensemble] until I’ve been photographed by the entertainment press.” Feiping Chang, meanwhile, was wearing a look with a similar silhouette to the one for her wedding party. “My husband was in the front row recording me on iPhone,” she told us. “I think I forgot to smile – and all I could think of was, ‘Don’t fall! Don’t fall!’” No one ever said fashion was easy.

Our week officially kicked off, however, with a private Louis Vuitton lunch at Lung King Heen – in other words, exquisite Chinese dining at a venue so difficult to get a table at, you not only need to reserve weeks in advance but also promise them your first-born son and left kidney. As it had already showcased haute joaillerie in a heavily guarded Four Seasons suite, LV clearly had an “in”, so getting a table must have been a cinch and lunch was predictably phenomenal (the lemon chicken is … everything). This was, indeed, a fabulous spot in which to be both obscene and heard, with dishes as delish and as hot as the trade secrets and gossip that we love to collect and disseminate … but all off the record, of course.

The same evening, the folks at TAG Heuer invited us to the movie premiere of Kingsman: The Golden Circle. Its predecessor was witty, stylish and had so much of Colin Firth, that fine specimen of an English actor (who, one hears, now holds an Italian possport, too), that we nurtured great expectations for the sequel. How wrong could we be! Rarely do we use words like “bitterly disappointing”, unless referring to our reflection on a back-lit mirror while wearing spandex, but on this occasion they were all too sadly appropriate. The plus points? Er, the styling was perfect, and the watches and gadgets were very cool. And that’s about it really.

We spent a warm Thursday afternoon at the Claudie Pierlot store in ifc mall, where cocktails and canapés were served as guests went serial shopping. Between sips of prosecco we began several conversations, which were invariably interrupted as one woman after another disappeared into the changing rooms – Belleville lace-and-mesh embroidered top, lace-insert crepe top and bead-embellished cotton-poplin shirt (all words we learned that day and are proud to repeat here) clutched tightly in hand.

Friday, we rolled up – if a trifle late – at the J Crew x Selvedge Grooming cocktails at the clothing brand’s On Lan Street men’s store. As we’d only just sent the magazine to print we were somewhat worse for wear, but snaked our way into the event nonetheless. However, on hearing the booze bottles were as empty as those we’d left behind in Prestige Towers, we slithered out just as quickly. It must be said, though, that the shop is gorgeous and – attention all men! – the Selvedge Grooming post-shave moisturiser by is just about the best dang product we’ve used in years. Get it. Now.

Finally, over the weekend, Hermes hosted a huge party for its autumn/winter 2017 “Men Upside Down” presentation, covering Kai Tak in prints and the colours of Hermes, which was no mean feat. Predictably we moaned about getting there – our Uber took all of 25 minutes! – but our unquenchable love for the chic Parisian brand remain undiminished. Granted we missed the catwalk show, which featured a mix of “real people” and male models (we’ll leave it to you to decide who belonged in which category), on account of … well, the mail seemed to have lost our invite for the show. But, the after-party invitation arrived bang on time.

No one has ever accused us of being sartorially savvy, so to review the collection and party we took as our plus one the fabulously fashionable Lucia Tate Tolani, who was, as expected, immaculately dressed. The live music, the game rooms, the interpretive dancers, the dessert buffet, the unquenchable flow of champagne, the view of Hong Kong skyscrapers … well, what a way to end the week!

Till next we whine and wine.