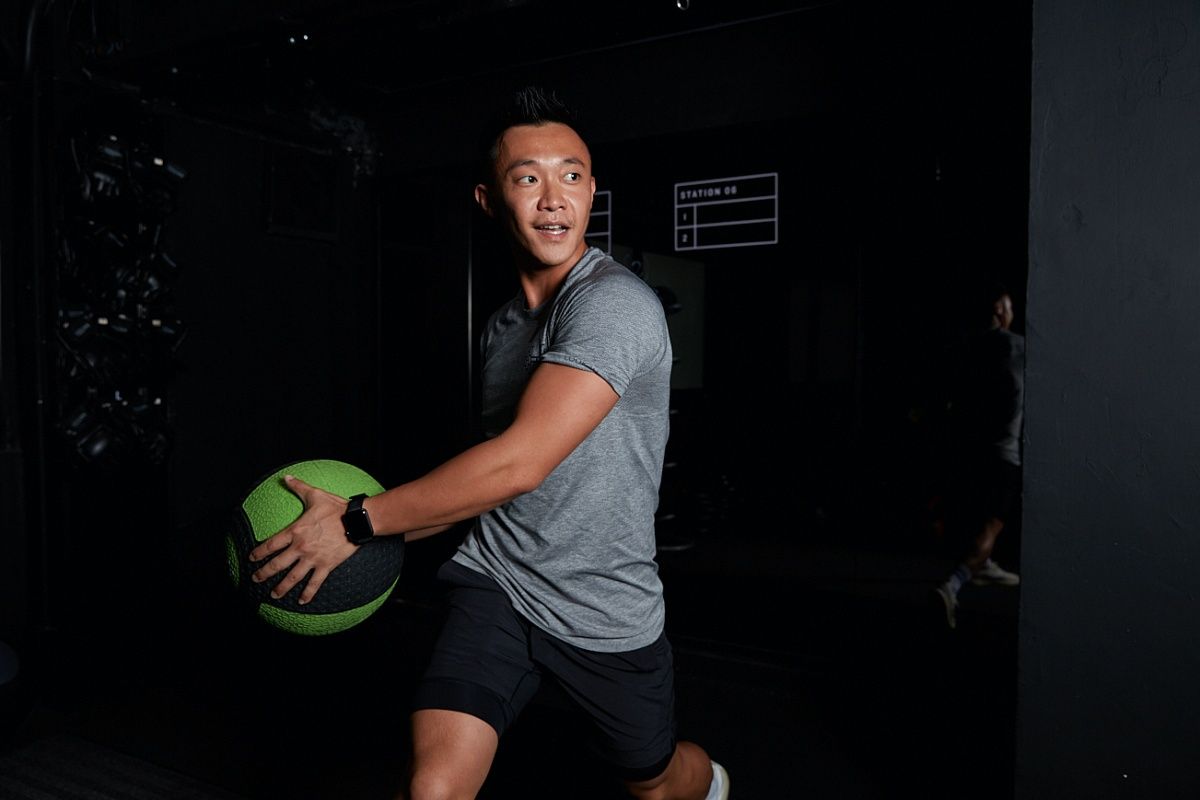 When I meet Charlz Ng at House of Fitness, the boutique high-intensity studio in Sheung Wan that he co-founded with business partner Michael Melly, there’s a class going on. The venue is dark, awash with the blue and purple hues of florescent lighting, and absolutely pumping with music. The trainer shouts over the din as members stretch and move their bodies in unison to the beat. If it feel as if I’ve just walked into a nightclub, then maybe it’s intentional, because Ng started his career planning events in the nightlife industry.

Ng has an exuberant energy and positivity that are immediately evident as we greet each other for the first time. We haven’t met before, but anyone who’s in the least bit interested in fitness will have heard of him – and if his name doesn’t ring a bell, perhaps the festivals and events he’s put together will. IRIS: Your Escape, the festival that’s taken Hong Kong by storm since 2015 and propelled yoga and wellness into our collective consciousness, was the result of Ng’s blood, sweat and tears.

Active as a youngster, Ng played various team sports while in boarding school in the UK, but in university, he discovered a passion for organising parties, and fitness fell off the agenda. It wasn’t until years later, exhausted mentally and physically from late nights at the clubs, that he and his partners discovered the benefits of yoga and the importance of balance. Soon after, Ng’s Hybrid Group made the transition from hosting music events
to hosting wellness events: the first-ever IRIS was attended by almost 200 people, who showed up at Discovery Bay for a beach yoga session.

Through wellness, Ng also found a new purpose in life. Although IRIS started out as an event, it’s now evolved into a community for like-minded individuals. Yoga was a large part of the festival, but now, running into its sixth year, IRIS encompasses a yoga stage, a silent disco, a zen garden for meditation, a fitness space for other types of workouts, an insider platform for talks and performances, and even a marketplace to showcase a range of products, from fitness apparel to health foods.

“Before, when I ran an event, my goal was to maximise ticket sales, get sponsors and milk every dollar,” says Ng of his own wellness journey. “But when I started doing IRIS, the sense of empowerment I felt and the ability
to spread positive messages really grew on me. It gave me a new mission in life and it made me want to continue doing more,” he says.

He remembers receiving a note thanking him for organising the weekend festival, which helped the writer change their perspective on how to live well. “I was like, wow, this email really just sets the foundation for what
I want to do for the rest of my life. I’ve found my mission, my goal, and I just want to multiply this formula to all the different businesses and communities that I’m involved in. I like being able to spread any sort of positive message, even if it’s to three people at a time, or 30 or 300 or 3,000 … As long as I can touch a person’s life, it’s something I want to do.”

For someone who just turned 31 this year, Ng has done quite a lot. After IRIS, he helped his team at Hybrid bring the Spartan Race to Hong Kong. He’s also the co-owner of the boutique gym House of Fitness and the director of ceremonies of the forthcoming Gay Games 2022, an event that he’s been preparing for over the last five years and is potentially the largest and most significant sporting event the city will see in years.

Ng admits, a little sheepishly, that five years ago he had no clue what the Gay Games were. He first discovered them when he saw his friend Dennis Philipse’s Facebook status on recruiting volunteers while Philipse was bidding to bring the international event to Hong Kong. Impressed by his passion, Ng offered to help. “Later on I was gobsmacked when I learned more about it. I couldn’t believe I’ve never heard of it before – but then no one
in Hong Kong had heard of the Gay Games. It was such a North American thing.”

Ng attended his first Gay Games in 2018 in Paris. “I thought I knew in my head what the Gay Games were, but arriving in Paris I got goosebumps. Oh my God, I’m getting goosebumps again right now!” he says, as he rubs his hand down his arm in excitement.

“The entire city, the entire airport became rainbow-coloured. It was so welcoming. Paris had a very unique position – as they’re hosting the Olympics in 2024, the city council was using the Gay Games as a trial. But it was great and the city was really vibrant.”

Aside from competing in the 10-kilometre run, Ng acted as a volunteer photographer, gaining the opportunity to run around the different tournaments and events, and experiencing the Games at close quarters, noticing the competitiveness, the seriousness and the sportsmanship displayed at every level.

He has fond memories of his time there, from cheering for the volleyball team at the finals – “All 90 of us who flew to Paris from Hong Kong went to the stadium to support and cheer. It was really emotional and obviously, we got gold” – to marching into the stadium at the start of the games, proudly waving the Hong Kong flag.

It’s his dream to replicate that level of excitement, acceptance and pride in Hong Kong next November. Although it’s involved five years of hard volunteering work, the Gay Games 2022 is starting to gain traction in the city. The team has long had the support of the Hong Kong Tourism Board and the Equal Opportunities Commission, and they’re hopeful that more major governmental departments will also sign up.

Hong Kong counts itself as an inclusive city and, as Ng points out, social media has enabled people of his generation and younger to express themselves freely. “Our parents are probably the last generation who are still stuck in a traditional mindset,” he says. “I think they had less information and there were fewer role models at that time to really explain or stand up for LGBTQ at that time.

“But this is exactly why the Gay Games is so important for Hong Kong. We’re not here to promote anything political, or even fight for marriage equality, nothing of that sort. It’s simply to raise awareness and tell people that, gender aside, an LGBTQ person and a straight person are equals. We can play sports, we can paint, we can meet,” says Ng. “Even for my parents, it was easy for them to understand what the Gay Games is and they’re quite supportive.”

Ng describes himself as an outgoing and social person who’s always been open about himself, but says he only came out to his parents in 2018. It wasn’t easy, he says, because he was waiting for the right moment. “I always had this script, this perfect scenario, like a dream proposal,” he recalls. “And my dream was to come out when I had a boyfriend. It just so happened that I didn’t until 2018.”

His parents have always supported everything he’s done in his life, but still, it was a difficult conversation. “As much as my parents love me and support what I do, they’re still traditional. Deep down, they still embrace this traditional thinking and this hope of having a son who’d carry on the family name,” he says. “That part was difficult because I’m trying to explain that being gay doesn’t mean you can’t have a baby. That’s not a real concern. And also, if I were straight, what were the guarantees that I’d have a partner or a baby anyway? If I didn’t have friends or a job but, oh, I were straight, would that be better? It’s all about perception.

“My mistake was to wait until I had my perfect story, but as a matter of fact you’ll never have that perfect moment to have that conversation,” he says. “After having it with my parents, I realised I could have had it 10 years earlier and it would have been no different.”

Having found power in building communities, for Ng’s next venture he’d like to move away from event planning. “I’ve had a fresh thought recently. I don’t think I want to stay in event management and production for life,” he says.

He’s currently working with eight other partners on Carbon, the new 8,000-square-foot restaurant, bar, entertainment, lounge and lifestyle concept that’s set to open at H Code in the late summer.

“It’s quite exciting because it combines everything I’ve done my whole life. Nightlife, wellness, building a community and an event space. It’s all coming full circle for me,” says Ng.

I ask him if there’s anything left that he’d like to accomplish one day. He pauses and then says, “The first thing that came to me was to go to Iceland, but that’s easy. One of my goals in life is to buy my parents a flat and also put them on a first-class plane to any dream destination. That’s something I really want to do.”