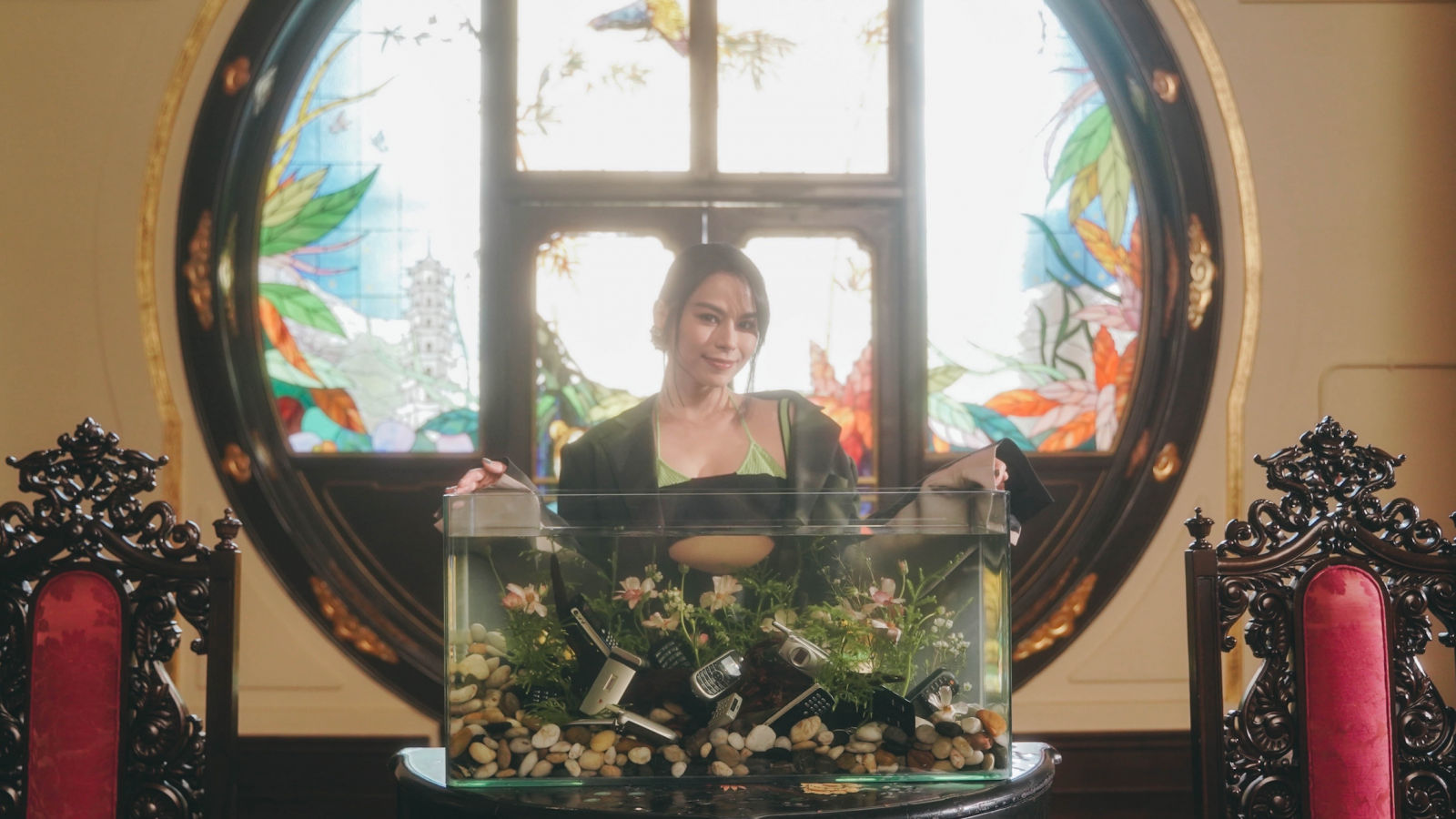 Malaysian-Chinese singer-songwriter, Gin Lee, tells us about her artistic journey in Hong Kong, from landing here unable to speak Cantonese and overcoming her darkest moments, to getting to where she is now.

FACING THE MUSIC WITH GIN LEE

Listen to our playlist here

Gin Lee first appeared on Hong Kong television in 2010 after entering the popular singing competition The Voice 2, when she was instantly recognised for her vocal abilities. “That was the very first time I came to Hong Kong,” says the sweet- and gentle-natured singer-songwriter. “After the competition, I was approached by a few different companies and I thought it was a good time to build a career. So in 2011, I came to Hong Kong officially and I’ve been based here ever since. In the same year, I signed with a company [BMA Records] and debuted as a Cantopop artist with my first song ‘Here I Come’.”

On how she got to this point, Lee recalls memories with her family, who were just as musical. Lee’s mother was a singer and her father a drummer who also sang. “Both my parents were in bands during the ’80s – before karaoke. They were in different bands but, through friends, met and fell in love.”

Lee laughs as she continues. “That’s how my sister and I came about. But after my elder sister was born, my parents left music and started working. Plus, karaoke was becoming increasingly popular, replacing live bands and music venues. Getting married and having kids also meant having to earn more money.”

It wasn’t until Lee was a 16-year-old in high school that her father, who felt the demand for live music was starting to return, suggested they form a band. The new unit, which included Lee, her father, elder sister and a few other friends, began performing together, giving her the experience that sparked it all. “I gained a lot of experience during this time. I was singing and performing, and my father would teach us along the way. How to dress and how to interact with other people. This was really practical training for us.”

After only a year of performing, Lee reached the point in her life where she had to make the big decision about what to study at university. She considered psychology, a personal interest, as well as sport, because of her talent as a sprinter – she represented her state in the 100 metres in Malaysia’s national championship. However, due to injuries and the shockingly brief careers of pro athletes, Lee decided it wasn’t for her.

“This is when my dad stepped in to say, ‘You love singing so much, and you’ve got potential, so why don’t you just focus on it?’” Thanks to this gentle nudge from her father, Lee took her first steps in building a music career and graduated from Kuala Lumpur’s International College of Music with a bachelor’s degree in vocal music and arrangement. She went on to release an albumin Malaysia in 2009 but, looking for a bigger stage on which to perform, entered a Taiwanese singing competition, eventually deciding to come to Hong Kong to seek out new opportunities.

With no family or friends here, Lee had to adapt to a different culture and pick up a new language – not to mention learn how to sing songs in it. To say the least, the challenge was daunting; nonetheless, she gave herself three years in which to carve out a music career here.“I thought I should at least try,” she says. “If I made it, I made it. If I didn’t, then I’d go back home.”

Lee spent three months learning Cantonese, watching TV from morning until night, everything from Hong Kong dramas to the news. At last able to converse in Cantonese, she began to appear on shows. “Sometimes the MC would speak so fast I couldn’t understand. I had to pretend I knew what was going on, so I nodded, said yes and smiled a lot.”

In 2014, her three years were up and her contract with her record label hadn’t been renewed. Calling this her “dark time”, Lee found herself at a crossroads – should she stay or leave? “I waited almost a year and still didn’t have a new record deal. I was really lost and scared. I began to doubt myself. Is it because I’m not good enough? And without a job, I had no money for rent so I was also really feeling the pressure of daily life … I didn’t tell my family though and just decided to figure it out on my own.

“I was depressed and cried every day. Crying as soon as it got dark and until the early morning. Then I’d fall asleep, because I didn’t get any the night before. I’d do it all again the next day. It was depressing. No money, no job, and no friends. It was horrible.”

The penny dropped when she realised it had taken even longer for others to reach their goals. “When they pursued their dreams, it took maybe 10 years to get recognised or see any kind of results. For me, it had only been three years, so why not keep going? If this is what I really want to do, I should keep trying. So I dropped all self-doubt and decided to go ahead and found the courage to approach different companies myself.”

It was then that Lee, who describes herself as passive and introverted, went into business mode. Learning how to negotiate deals, she prepared answers to questions the record companies might ask her, putting together all the contract conditions and control she was looking for.

“I grew up a lot in a short space of time. I was conquering my fears and doing things that don’t come naturally to me. Looking back, I’m grateful for what happened. I now know what it feels like to be scared and helpless. But I was tougher than I thought.

“Now, I feel able to tell others: you may be scared right now, but you need to have confidence in yourself because there’s nothing you can’t overcome.”

In 2014, Lee signed with Universal Music and went on to release multiple singles and albums, winning awards along the way and performing on her dream stage at the Hong Kong Coliseum. Today, after more than a decade in the Hong Kong music industry, she shares her thoughts about how much the industry has changed over the years.

“It was more about singing back then. Making albums and that’s it. People would buy CDs and listen to you. Now, being an artist is much more than just singing, or how well you can sing. Now, you have to increase your perceived value, especially online and in social media. Your social- media following is now the indicator of your popularity.”

And sure enough, Lee has also had to learn how to play the social-media game, taking photographs and editing videos to post online. “This is a livelihood. You have to build your career and therefore you have to learn. Having said that, I’m of the generation that believes you need a solid foundation in music and singing. From there, you can build everything else. Many are the other way around. They’re popular and then they learn how to sing. You can do that, but I prefer to get the basics right first.”

Set for release in mid-July, Lee’s latest album features songs that range across various topics and genres, some of which have already been released. They include the power ballad “When the Sun Rises”, a duet with Hong Kong legend Jacky Cheung about letting go and moving on; her first official dance track “IDK”, which tackles the reggaeton genre through a of mix Caribbean and Latin rhythms; and her latest single, “Just Right”, a romantic R&B song with a positive message. “The song uses love to say, please keep believing that good things will come,” says Lee. “The right thing will happen or the right person will come at the right time.

“My next single will also be a different genre – electronic rock. People will be able to experience different things on this album, different facets of me, different moods and different stories.”

Le French May, postponed this year to June, is also on her schedule. On June 24-25, Lee performs at the Hong Kong Cultural Centre Grand Theatre with jazz vocalist Talie Monin in a Hong Kong-France cultural exchange directed by composer Leon Ko. “A lot of Cantonese songs have connections to French songs,” she explains. “So I’ll be singing some of these French songs as well as some classic Cantonese songs. I’ll also sing some rearranged versions of my own songs for the full experience.”

Highlighted songs include “Tchin-Tchin”, the French version of Tsai Chin’s “The Forgotten Time” from the movie Infernal Affairs and the Cantonese version of “La Vie en Rose” by Danny Chan. This extraordinary musical journey through local and French popular music, along with a music masterclass, is sponsored by the First Initiative Foundation (FIF), which supports and promotes the arts, music and education.

Lee, whose split from Universal Music was revealed last month, says she’d like to explore acting. “In one of my last projects, I played one of the main characters in a mini-movie and really enjoyed it. I watched a lot of dramas during the pandemic and feel that being an actor is quite meaningful, especially now that we spend more time at home. So I’d love to be there for people, providing this entertainment.”

She also has some words of wisdom for would-be singers. “I’d advise spending more time perfecting the craft. Sure, gimmicks can propel you and make you popular, but if you want to call yourself an artist and enjoy a long-term career, you need to spend time practising, training and perfecting your craft. In my opinion, there aren’t too many in Hong Kong with strong foundations in this. We have hit songs and popular people, but if we’re talking about live singing, not too many hold that high level of skill.”

“I love to sing and I want to master this craft,” says Lee after all this time in the business. “This is my art. This is what I want to do. And I want to do my best in this.”