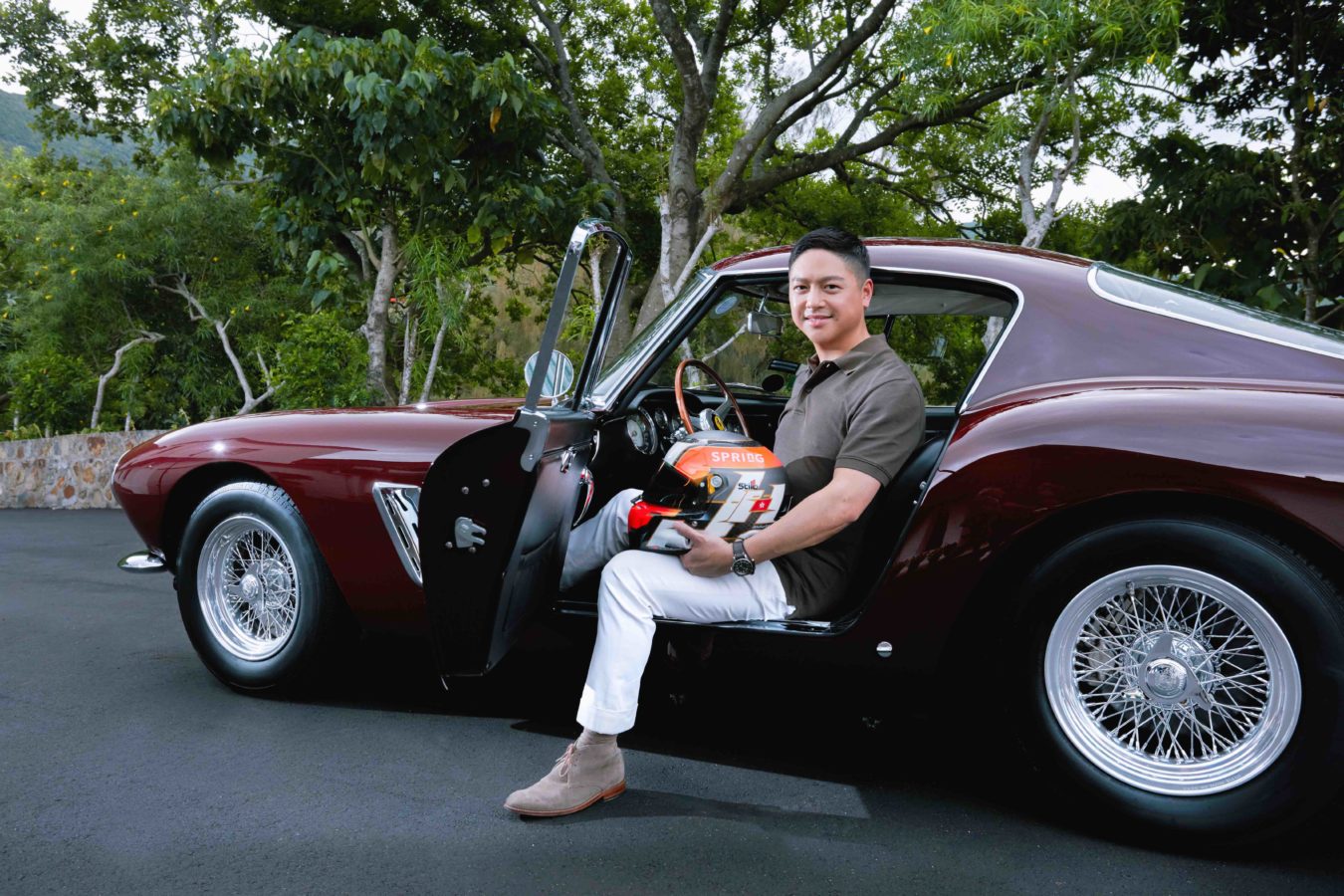 Passionate about automobiles since boyhood, Hong Kong-based car collector and gentleman racer Jonathan Hui tells us what drives him.

Few private residences in Hong Kong can boast a 150-metre-long driveway that twists uphill to the front door via a couple of pairs of gates and two tight corners. Of the handful that do, the chances are almost nil that you’d find, parked right outside the house, not just one rare Ferrari but two.

Almost nil, I said, because this the home of Jonathan Hui, whose people have already told me to expect something special on my arrival – and, boy, has he obliged. Right in front of me stands an F40 in racing red, generally considered to be among Ferrari’s greatest road cars, as well as the last to be signed off by Enzo himself. To my right, exquisite in a shade of Rosso Bordeaux and gleaming with polished chrome, sits a 250 GT Berlinetta SWB. One of the most beautiful automobiles ever made – and there were only 164 of them, put together largely by hand – the Berlinetta is rightly considered an automotive grail, just one step down in the pantheon of holiness from the fabled 250 GTO.

Hui strolls out from the porch to greet me. Compact and youthful, dressed casually in polo shirt, slacks and chukka boots, the 41-year-old is at ease and very much at home as he invites us into his sprawling, colonial-era bungalow, whose footprint is more akin to that of a generously sized mansion. He leads us into the large living room, a charming time warp of gracious authenticity that’s perfectly attuned to the untouched ’50s exterior, then out via a verandah on to a broad lawn. Beyond lies a panorama of swirling ocean, green hills and islands, and a cloud-blotched sky, all stretching far off towards the horizon.

“I used to play here as a kid when the house belonged to my grandfather,” Hui explains as we gaze out to sea, adding that now the place is his, the garden serves as a playground for his two boys, who’ve been cooped up here for months since the schools shut down at the beginning of the year. “We pitched tents the other week and I camped out with them,” he says, clearly relishing the space, freedom and seclusion that this remarkable home affords him.

By now, however, you’ve gathered that I’ve rolled up to chez Hui less with the aim of discussing his family and living arrangements (delightful though both appear to be), but rather to talk about his passion for motor cars, the collection of automobiles that he’s put together during the past 10 years and his weekend job as an amateur racing driver in an exceptionally demanding and competitive category of international motor sport. In fact, last year – when, as a member of the Tempesta racing team, he contested the Pro-Am class of the international 2019 Blancpain GT Series in a Ferrari 488 GT3 – was arguably the Hong Kong racer’s most successful season yet.

My assumption that, as a scion of one of this city’s longest- established business dynasties, Hui’s fascination with fast cars would have been passed down through the bloodline turns out to be almost totally incorrect. “Actually,” he replies to my query as to whether a particular family motor had triggered his passion, “hardly anyone in my family was interested in cars at all.” He tells me that his father had a brief dalliance with sports cars while living in England, but that was quickly extinguished after a traffic-lights grand prix in which his modest MG lost out to a much faster Aston Martin.

Hui thus nurtured his youthful petrolhead passion more or less on his own, though a prolonged stint of schooling in Canada proved an unexpected boon, as the legal driving age in most of the country is just 16 years. Almost as soon as he’d passed his test, he was enrolling for track days at Ontario’s Shannonville and Mosport Park circuits, the latter historically the venue for several Formula 1 grands prix.

Returning to Hong Kong and working first in advertising and later in the family property business, Hui also found time to put his racing ambitions on track, competing during his spare time in both touring- and sportscar races on circuits such as Zhuhai, as well as taking part in the annual Macau Grand Prix weekend. By 2013 his efforts had taken him to the Middle East for his first 24 Hours of Dubai, and also saw him competing in two rounds of Lamborghini’s Super Trofeo Asia series, one in Shanghai and the other at Sepang in Malaysia. Since then, he’s concentrated largely on supercars and, increasingly, endurance racing, a discipline that rewards not only speed but also consistency and strategy – and he regards his participation in the 2018 24 Hours of Dubai as an inaugural member of Team Hong Kong/Black Falcon as a key milestone. “The Hong Kong Automobile Association had just become a member of the Olympic Committee of Hong Kong, so this was the first time that we drivers were regarded as athletes who officially represented Hong Kong,” Hui explains.

Last year, he and his fellow drivers achieved two Pro-Am podium places (including one first ) in the Blancpain GT series, which concluded with a gruelling, rain-swept 24-hour race at Belgium’s legendary Spa circuit in which he partnered with former F1 pilot Giancarlo Fisichella, Italian-American racer Eddie Cheever III and his regular teammate, the British gentleman driver Chris Froggatt. Although they missed a podium by finishing fourth in class, it nonetheless proved an epic experience that’s left Hui thirsting for more – and in particular to fulfil an ambition to take part in the famed 24 fours of Le Mans.

“The middle of the night, which is usually around 3 or 4am, is probably the toughest time,” says Hui of the classic endurance-racing format. “You must remember that in a 24-hour race you’re not just up for 24 hours only, because you’ve already been awake for at least five or six hours before the race begins.

“I’ve now done five 24-hour races and I haven’t managed to sleep at all in any of them. There’s so much adrenaline pumping. You try all sorts of strategies to relax yourself – eye masks, ear plugs, everything – but you’re always a little bit alert, anxious and wanting to know what’s going on. Compared to other amateur drivers, one of the edges you can have is by being more prepared, so you drop the mindset that you’re an amateur. You can’t say, ‘Oh, I’m too tired, don’t bother me, let me have my rest.’ So, if someone calls you, you have to be well prepared and ready to go almost at any moment, and that’s one of the things that I try to do.”

By definition, it also means that what was once a leisure activity that took up no more than a few weekends a year has now turned into something much more time-consuming. “When I jumped into it,” says Hui, “I thought, ‘OK, five races and two test sessions, so maybe I’ll be away for seven weekends,’ but the reality was that we tested three or four times, and being prepared for a race weekend means that, because we’re in Europe, I’m away probably for a whole week, and every time I come back I have to adjust to the jetlag, which takes another three or four days. And then, less than two weeks after that, I’m packing my bags again.

“And to be honest, when you’re that committed and you can see that results are possible, there’s the drive and the motivation to try to do well and really get a result. We ended up finishing the Pro-Am championship in third place overall, just two points away from second, so it goes to show that we had all the potential and the ingredients even to go for the win.”

Whether this year’s five races go ahead is, of course, a moot point. “Personally,” says Hui, “I think we’d be better off if we called the whole season off, and instead geared up and focused on next year, but it’s not my decision. I do want to go racing, but then if we do that over the last three months of this year I’m essentially going to be living in Europe.”

Changing the subject back to his car collection, Hui tells me he began putting it together in earnest not only as a means to slake his own passion but also because it was an activity in which he felt could involve his whole family. Currently around 25 automobiles strong, it includes the two Ferraris parked outside, as well as a pair of Paganis, a McLaren Senna, Lamborghinis, Porsches and a rare road-going version of the late-’90s Le Mans-winning Mercedes-Benz CLK GTR; roughly half of them are stored in the UK and the other half he keeps in Hong Kong.

As we stroll back outside, Hui talks at length about his Ferrari 250 GT, which was originally ordered by a Roman professor in late 1960 and eventually delivered to him in mid-’61. “I think the 250 GT SWB is maybe the prettiest car ever made. It looks like a shark — I’m really partial to the lines and the proportions.

“This particular car had many special features, like the chromed rear air outlets, the chrome filler-cap, the flush door handles and the seats, which come from the California Spider. The original owner also sent a sketch of the console of a Facel Vega [a luxury French car of the time], and [Ferrari] said we can’t do it exactly, but we can give you something like it.” Indeed, the entire correspondence between the professor and Ferrari is still in the archives, which Hui likens to his own more recent collaboration with Horacio Pagani over the creation of his unique Zonda Fantasma Evo — coincidentally, even the colours of the two cars are almost identical.

And then, all of a sudden, he asks me. “Do you want to go for a ride?” This I want so badly that I’m into the 250’s passenger seat before he can change his mind. Hui starts her up and the greatest little V12 on the planet bursts into tuneful life, sounding as sweet as it must have done on the very first day it rolled out of the factory gate almost 59 years ago. He slots the shifter into first, releases the gloriously old-school handbrake and suddenly we’re out on the road in one of the loveliest motor cars ever made, the warm afternoon air blowing through the open windows, the three carburettors sucking air in through their highly polished trumpets and the revs rising and falling majestically as Hui snatches ratios on the four-speed gearbox.

Like Hui, I too have been searching for automotive heaven ever since childhood. And now, at long last, as he changes down while double de-clutching and then, with engine racing, accelerates up the hill, I think I might just have found it.