Aside from his property investment interests, businessman Jonathan Cheng tells us about the things he loves, from fast cars in Europe to hopping on a motorbike for roadside breakfasts in Koh Samui.

On first glance, you’d think that Jonathan Cheng — tall and casually dressed in faded jeans and collarless dark blue shirt — was an impresario or perhaps a successful restaurateur, or maybe the director of an international advertising agency. Your first impression would almost certainly be wrong; in fact, you could spend hours making wild guesses as to what exactly it is that Cheng does and it’s odds-on that you still wouldn’t get it right.

“Even when I go to meetings with banks or other financial institutions I dress like this,” says Cheng, who’s actually the CEO and managing director of Hong Kong-based LC Capital, a boutique Asia Pacific-oriented private-equity fund that — partly thanks to a holiday he took several years ago — focuses on property development among other multi-strategy plays.

Cheng explains that his foray into real estate began almost as an aside when, on a skiing trip to Niseko in northern Japan, he found a plot of land. “I’d been running a private-equity fund — a lot of equity trading, company restructuring — very different from what we’re doing now,” he says. “But when I saw the property in Niseko I fell in love with it. So I rang up some people to see if we could do it together.” 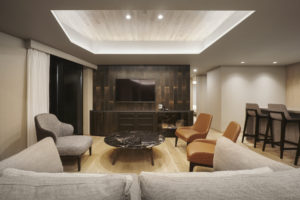 It turned out to be the foundation of a portfolio of properties currently worth in the region of US$175 million, in locations as far-flung as Japan or Perth in Western Australia, the city to which Cheng had moved to attend high school and university. “When it started,” he says, “it was a kind of a one-off thing, more of a fun project than anything else. But it took off, and because I was often in the area I went around looking – not actively, but when they’re on the radar they’re on the radar, right? And then other things popped out of the woodwork and the numbers made sense, so we got into it full-time. We started Infinity Capital Group as a property developer – and the next thing we know, after having two or three people in the office, we’ve got 25 or 26.”

Although clearly a man of taste and with a penchant for design, Cheng doesn’t get too involved with the architectural side of the properties he develops. “I have my likes and dislikes and always give my input,” he says, “but I see things more from a numbers perspective. In areas where we’re able to control construction quality, construction timetables, we’ll go in that way because there’s more value to extract. But right now we’re trying to grow the brand and get into more areas, and when that happens we need to take a look at mature properties as well. Now’s a good time, because tourism’s been hit a lot, things are coming out on the market and there’s a lot of value to be had.”

In fact, so busy is he these days that Cheng doesn’t have much time for many of his favourite activities. “I enjoy skiing a lot and I still go snorkelling if I can get the chance. I used to enjoy golf, but I’ve got a bad back so these days it hasn’t been much of a priority for me. And from a work perspective I don’t have much time. Skiing’s definitely nice but obviously with the business I can’t go around the globe chasing the snow like some people can.”

Of the passions that he is able regularly to indulge, watches and – perhaps not surprisingly – cars feature high on the list – indeed the first time I met him I couldn’t help noticing the Patek Philippe discreetly strapped to his wrist. “I’ve got several watches and I like to be understated. It’s the only accessory I wear except for a necklace, which was given to me by my mum many years ago. I think men should keep it simple. 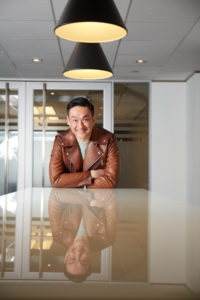 “I rotate the watches and wear a different one every couple of days. I don’t keep them on a winder because if you don’t wear them and they stop, you’re not wearing down the mechanics. This is purely my own opinion and I know a lot of people think otherwise, but I think the more you use them the more worn out they get, just like a car.”

Which brings us – and all very naturally – to the photograph in his office lobby of Cheng posing with a Lamborghini at a roadside in what looks very much like Europe. I can’t help asking him if it’s his.

“I used to go over to Europe every year with my mates,” he explains. “There’d be nine or 10 of us and a friend who’d organise it for us. We’d pick up a fleet of supercars and drive through France – Champagne, Burgundy, places like that – and end up in a quaint hotel or castle where we’d unwind every night with a wine dinner, and the next day we’d continue on our way. So yeah, I love cars, I love driving and I love getting it out of my system once in a while. A few years ago, we started in Munich and ended up in Monaco for the Grand Prix, and there are stretches of autobahn and autostrada where you can really give it a squeeze…

“Here in Hong Kong, I’ve got a Ferrari 488 – a beautiful car – and a Bentley Continental [both of which he tells me are coupes]. I like convertibles but over here it’s like you’re getting too much attention sometimes, especially if you’re caught up in a jam and you feel like an animal in a cage. I remember telling myself when I was 35 that I wanted to buy a Bentley, but one of my mates told me, ‘Hey, it’s a bit early for you – you should get one after you’re 40.’ I’m 45 now, and I’ve got this bad back, and it’s really, really comfortable. 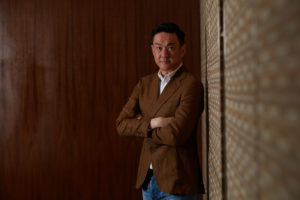 Although Cheng jokes that he hasn’t reached his mid-life crisis quite yet, he does admit to looking around for an older Porsche. “I’m a 911 fan boy,” he says, “and the 993 [the last of the air-cooled 911s, which ceased production more than 20 years ago] is beautiful. I’m looking around for one that I can register and put on the road. I try to drive every day and swap the cars around, just like my watches, but sometimes I have to use the company car, especially if I’m having a little bit of a drink after work with clients.”

And what about those increasingly rare occasions when he’s able to get away from Hong Kong to relax and unwind? “I feel most comfortable in a beach-resort setting,” Cheng says. “So every two or three months I try to get away for a weekend, to Bali, Samui or Phuket. The Maldives are beautiful but it’s not something you can do for two or three nights, just nip out and nip back in – plus if you go to islands that require a seaplane transfer it gets even more complicated.

“I like Samui a lot, because it’s not so commercial, it’s not crowded, not many cars and I feel safe alone on a motorbike. Contrary to what you might think, I like going to roadside stalls, so I rent a motorbike and go to the little stalls for breakfast, just in flip flops and a singlet. If I can get out every couple of months to places like that, it would be fantastic. I think that would be perfect.”