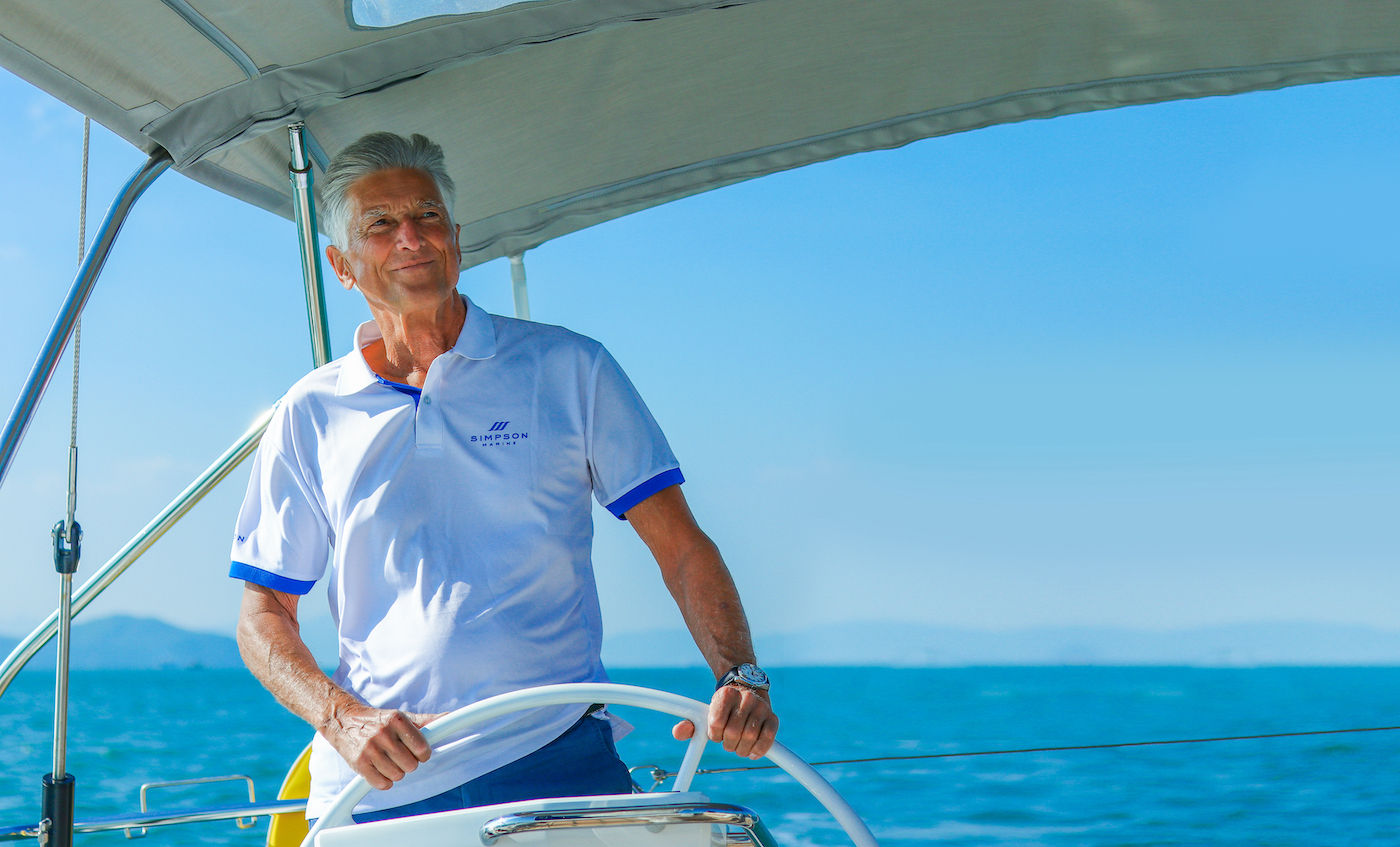 If one man could claim responsibility for affluent Asians’ growing passion for yachting and the sea, that might well be Mike Simpson.

His tall figure has been a well-recognised presence around the typhoon shelter ever since he berthed his yacht alongside the Aberdeen Marina Club almost 40 years ago. In those days, Mike Simpson was a one-man-band, living aboard his boat, meeting fellow sailors and occasionally, over a beer or two, selling them a yacht. Now he heads one of Asia’s leading yacht-sales, charter and management companies, with a team of almost 100 based in 12 locations across the region, from Bali to Taiwan. And yet this freedom-loving Englishman had never intended to build a business at all.

Although Simpson says that he’s told his story several times, it’s a yarn well worth repeating. “If you want to start from the beginning,” he says, “I came to Asia to build a yacht for myself, in Taiwan, with the intention of sailing it around the world. For about 10 or 12 years before that, I’d been travelling in different parts of the world on foot and by boat, and I’d ended up in Greece running a yacht charter fleet.

“My girlfriend at the time was a keen sailor who’d helped to deliver a yacht back from Taiwan and told me what great boats they built there. In those days I wasn’t terribly impressed with the Taiwan-built sailing yachts I’d seen, which were clipper-bowed and heavily built, but one day a beautiful 46-foot, centre-cockpit cutter sailed into Mandraki harbour in Rhodes, where I was working. I wandered over, introduced myself, and the owner showed me around – and it turned out that it was built in Taiwan.”

“We’ve had great success with Sanlorenzo, whose combination of cutting-edge design and exceptionally high quality has struck a chord with Asian buyers”

Convinced, perhaps as much by the serendipity as anything else, the pair decided to head out to Asia, where they’d build their dream yacht; this was at the tail end of the 1970s. “The idea,” he says, “was to sail around the world – though, of course, we’d have to make some money to cover our costs en route. Maybe we’d charter the yacht or work on other people’s yachts, or in a boatyard – you did whatever you could to earn money on the way, that’s how it used to be.”

They holed up for half a year in Tianmu, a suburb of Taipei, and Simpson, who conveniently spoke Chinese, went to the shipyard each day and worked with the team to build his yacht, Hoopoe. Once it was finished and fully fitted out for cruising, the two of them sailed out into the teeth of a South China Sea gale, with Hong Kong and then Singapore being the first two stops on their planned epic circumnavigation. But that was as far as they got.

“We were all set to head out from Singapore for Sri Lanka, our planned next stop, when an American saw the boat at anchor and asked if he could have a look. After a quick walk around, he said, ‘This is my dream yacht. Is there any chance you’d sell it?’ I remember my girlfriend immediately snapped back, ‘Of course not, this is our home!’ but I wavered, because when you’re building a yacht there’s always something you could do better next time and we had debts to repay.

“I worked out what it would cost us to fly to Sri Lanka to pick up our mail from the poste restante in Galle, then fly on to Courchevel in France for a couple of weeks’ skiing, then fly back to Taiwan and rent a flat there while we built Hoopoe II. I gave him the price, which also included paying back the money we’d borrowed to help us buy the yacht, and to our amazement he said, ‘OK, it’s a deal.’ So off we went to his lawyer’s office and it was done literally in four or five hours.”

That eventually brought them back, via a long and circuitous route, to Taiwan, where they started all over again. Only they never did get to circumnavigate the world, because while building their second yacht they met “an English guy who was looking for a yacht in Taiwan” and, well, you can guess the rest.

“We delivered that one down to Hong Kong fully fitted out and ready to sail away,” says Simpson, “and he turned up with a suitcase – well, two suitcases, one with all his kit in it and the other one full of banknotes. After a day counting banknotes the deal was done. He sailed off two days later and I never heard from him again!” By then, he says, the penny had dropped and though he’d never been interested in getting into business and money was only a means to an end – funding for adventure and travel – he realised that a business was exactly what he had.

“I thought, ‘Maybe instead of being typical impecunious sailors, earning money along the way, we could build up a cruising fund by selling yachts for six months or so and then set sail again with some money in the bank.’ By the time I took a third yacht down to Singapore specifically to sell and to pick up a couple of orders, the shipyard had caught on and said, ‘By the way, would you be interested in becoming a dealer?’ So my girlfriend returned to England and I ended up here with the dealership for Ta Chiao yachts for Hong Kong. “I sailed my yacht into the newly opened Aberdeen Marina Club – I think, it was 1983 – and that’s how I got started here. I was living on the boat, I’d got a berth right in front of the clubhouse, and that’s where I began the business, from the yacht. The dealership was simply a document I’d signed with the rights to sell yachts here.”

Yachting in those days meant sailing yachts, says Simpson, and “there was quite an active scene, mainly centred around the Royal Hong Kong Yacht Club”. However when a “buyer” explained that he’d decided to buy a Beneteau from France instead the beautiful hand-built yacht from Taiwan he’d been hoping to sell him, Simpson realised that his heavy Taiwanese boats didn’t feed the Hong Kong yachties’ appetite for club racing and performance. Realising a change of tack was needed, he contacted the Beneteau shipyard to learn more about them and ended up taking on the French manufacturer’s local dealership, which he still holds today.

“It’s a very long relationship, which says something, though I’m not sure what!” he says with a chuckle. “It’s now 35 years since we became their dealer, first in Hong Kong and then in Singapore, Malaysia, Indonesia, Thailand and China. They’re one of the world’s largest yacht builders with more than 400 dealerships worldwide, but they’re yachtsmen at heart and that comes across in the way they do business. They’re a great company to work with and I still enjoying doing business with them.”

Simpson’s move into motor yachts began when he met the Australian businessman and “corporate doctor” Bill Wylie, a man perhaps most famous in Hong Kong for heading Hutchison Whampoa in the late ’70s. “There’s a sort of cultural divide,” says Simpson, “between ‘true’ sailors, who sail boats with sails, and motor-yacht sailors, who typically have a captain and crew to look after everything and do all the work – or all the fun, as we ‘true’ sailors might say – while they just sit back, relax and enjoy the service! Although we’d started out selling sailing yachts, when I met Bill he was intending to move back to Australia and was interested in getting a motor yacht to keep down in Perth.

“It’s the realisation of a dream, to help spread yachting around Asia, because being so keen on it and loving the adventure of it, I wanted to share that.”

“Coincidentally, I’d seen an advertisement in a magazine for an Italian motor-yacht builder. So I put two and two together, flew to Italy, went to the shipyard and explained that I possibly had a buyer for one of their 76-footers, which in those days was a big yacht in Asia. And that was how that deal happened – and how I got into motor yachts.”

That shift towards motor as opposed to wind power largely coincided with the company’s expansion into a regional operation, with sales and service facilities across East Asia. “If you look back over the last 30 or 40 years,” Simpson explains, “it’s been a turbulent period in Asian history, with all sorts of political and economic upheavals around the region, but fortunately not in all Asian markets at the same time – if some countries were down, others would be up.

“What that showed me was that if your business was centred only on one country, and that country experienced a serious financial crisis, you’d have no business. So I decided – though there were some additional circumstances that led to it – to open an office in Singapore and then in Malaysia, and so on. It greatly extended the reach of the company and it’s worked well for us – it’s given us a kind of balance.

“But it was also the realisation of a dream, to help spread yachting around Asia, because being so keen on it and loving the adventure of it, I wanted to share that, to be a pioneer, as it were, and introduce people to boating – and having the offices around Asia meant that people were given the confidence that if they did decide to go cruising further afield, we could look after them. And that’s always been part of our philosophy.”

Simpson admits – a little ruefully, as he doesn’t like to crow at a time that’s proved so hard for so many – that the past 12 months have been surprisingly good for business. “Although it could have been extremely bad for us, it worked out very well, and quite the opposite of what we’d anticipated. We’re very fortunate being in such a beautiful location in lockdown. When you get out on the water around Hong Kong, you see what a beautiful place this is – and that the best way to enjoy it is to buy or charter a yacht. Last summer I bought myself a Beneteau Oceanis – a sailing yacht, of course! – and I’ve enjoyed sailing with friends every weekend. When you’re sailing along in a brisk northeast monsoon with this beautiful coastline going past, it’s wonderful.”

As for being an old-school sailor who’s now forced to rely on new-fangled motor and superyachts for the bulk of his business, he’s phlegmatic. “To sustain and develop the business, we have to sell large motor yachts and we’ve had great success with Sanlorenzo. whose combination of cutting-edge design and exceptionally high quality has struck a chord with Asian buyers,” he says.

“We could never afford the regional presence we have if we were only selling sailing boats, because they’re a relatively small segment of the rapidly growing Asian yacht market. The reason we continue with Beneteau is because we really like the brand and because it’s our identity, it’s where we started. Beneteau are yachties themselves and I do think that’s why the relationship has lasted for so long. We share the same passion for the sea.

“It’s part of our DNA that we continue with sailing. And we always will.”