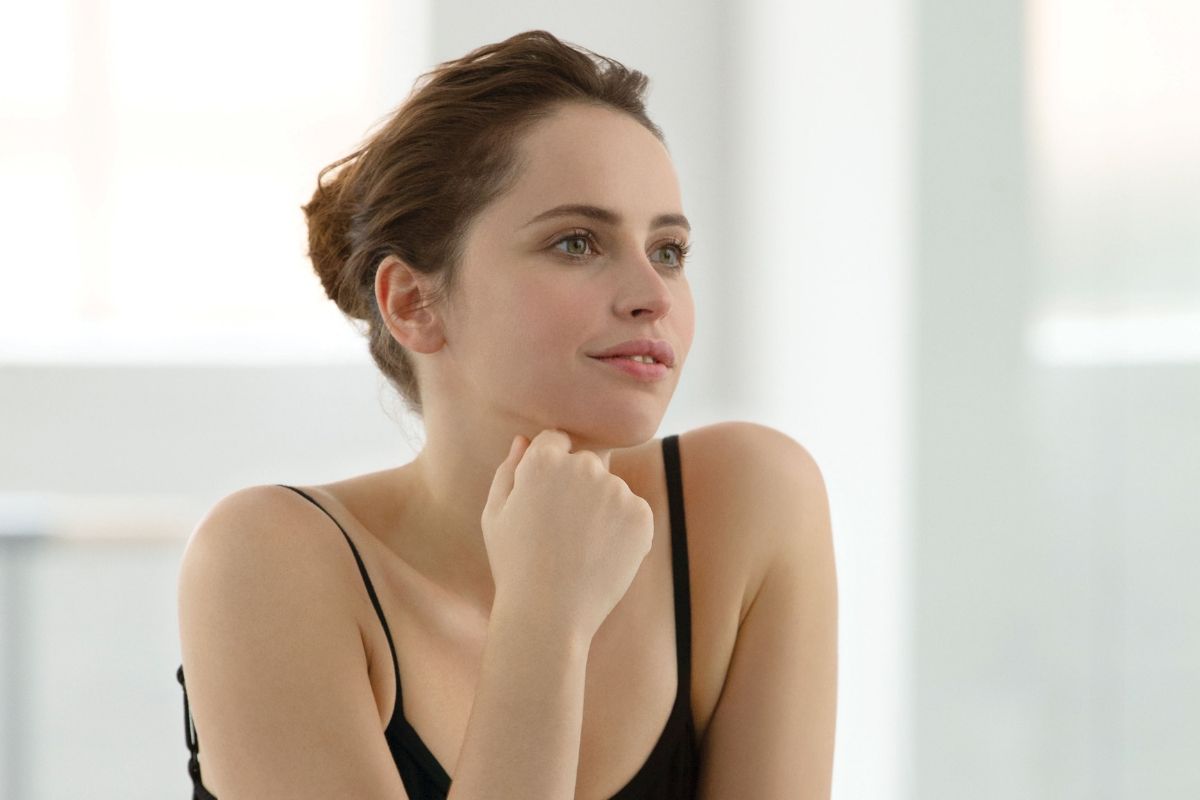 People & Events
Tama Lung
Sign up to get the latest luxury and lifestyle news delivered to your inbox.

She’s been a professional actress for 23 years. She’s portrayed a villain, a resistance fighter and a Supreme Court justice. And she’s widely considered the embodiment of inner and outer beauty. Is Felicity Jones the closest thing to a modern-day superhero?

Felicity Rose Hadley Jones became a working actress at an age when most kids are studying algebra rather than studying lines. “Well, my first role was in a costume drama for television called The Treasure Seekers, about a group of children trying to find a fortune to help their single father struggling as an inventor,” she recalls of the 1996 TV movie, for which the then 12-year-old Jones received second billing. “We shot it in a lovely old house just outside of London where there was a huge tree swing, which we would all play on in between scenes.”

A promotional poster shows the young star grinning widely along with the rest of the cast, a sure indication that Jones had found her calling among her fellow thespians. Nowadays that same cheeky smile can be seen on posters and advertisements all over the world, either for her latest blockbuster film — The Theory of Everything, Rogue One: A Star Wars Story, On the Basis of Sex come to mind — or in her role as global ambassador for Japanese cosmetics brand Clé de Peau Beauté, a position she’s held since early 2018. But how, one wonders, does she manage it all with such grace, such poise and such an unusual lack of personal turmoil?

“I joined a youth drama group when I was growing up, which I absolutely loved,” says the 35-year-old, who grew up near Birmingham in England’s West Midlands. “We learnt about acting in theatre, film and television. I made some lifelong friends there and that’s where I had auditions for professional work.”

At the time, Jones says, she didn’t have aspirations for a Hollywood career. School and schoolwork took precedence, even when it came to her youth group. “I never knew if I’d be able to act professionally, it was just something that I loved doing,” she says. “It was always such good fun and I loved the camaraderie around it.”

Jones continued acting throughout university, appearing in student plays, as she pursued a degree in English literature at the University of Oxford’s Wadham College. Now her portrait hangs in the college alongside fellow alumnae, including actress Rosamund Pike and author Monica Ali, a testament to the school’s “changing faces”.

Following her graduation, Jones appeared in a number of television movies and series in the UK, including one episode of Doctor Who. But before long the big screen came calling. After bit parts in films such as Brideshead Revisited and Chéri, she was cast as the star in The Tempest, directed by Julie Taymor, and Like Crazy, directed by Drake Doremus.

“Like Crazy was a huge experience. Working with Anton Yelchin and Drake Doremus was one of the most extraordinary acting and life experiences I’ve had,” Jones says. “It was the first time I improvised on camera, which I relished.”

It was reported that Doremus and co-writer Ben York Jones put together an outline, 50 pages long, and had Jones and Yelchin improvise off it. Her performance garnered a number of international awards, including Best Female Newcomer at the Empire Awards, Breakthrough Actor at the Gotham Awards, a tie for Breakthrough Performance from the National Board of Review, and a Special Jury Prize at Sundance Film Festival. Doremus must have also been pleased, considering he cast her in his next film, Breathe In, opposite Guy Pearce.

Breathe In was released in 2013, but it was following year that could be considered Jones’s breakout. Besides appearing in The Amazing Spider-Man 2 as Felicia Hardy, aka Black Cat, she captivated audiences as Jane Hawking, first wife of renowned physicist Stephen Hawking, in the biopic The Theory of Everything. A slew of award nominations followed, including Best Actress at both the Academy Awards and the Golden Globes.

But Jones is quick to point out that she’s in it for the craft and the challenge, and not the awards or accolades. Over the years, she’s appeared in several plays and is still fondly remembered for her recurring role as Emma Carter in BBC Radio’s long-running soap, The Archers.

“The most important thing,” she says, “is the story you’re telling rather than the medium. Narrative is everything.”

Indeed, Jones has been known to throw herself into a role, whether she’s playing the villain to Tom Hanks’s protagonist Robert Langdon in Inferno or championing women’s rights as legendary Supreme Court justice Ruth Bader Ginsburg in On the Basis of Sex.

“I definitely like a challenge and I have to feel creatively invested in the story. I have to care about that person I’m playing in some way. I usually go for things that I can’t stop thinking about a couple of days after reading the script.”

Once she decides on a role, Jones goes all-in. “I really enjoy researching a character and understanding the world from their perspective. Physical prep is key, too — how does that person move?” she says. “Also finding the look is very important: trying on wigs, different costumes. There’s a huge amount of collaboration with creatives in the hair, make-up and costume departments. The approach is both external and psychological. Understanding what motivates that person: Why are they behaving in a certain way? Why are they making certain decisions?”

When it came to her latest big-budget, box-office sensation, Jones found herself studying kung fu among other “forces”. Rogue One saw her introduction as resistance fighter Jyn Erso in a critically praised portrayal that left audiences clamouring for more: the Kids’ Choice Awards, Teen Choice Awards and MTV Movie Awards all nominated her in categories such as Choice Sci-Fi Movie Actress and Favorite Butt-Kicker.

Jones followed up her Star Wars turn by embracing the life story of Ruth Bader Ginsburg, the American attorney who championed women’s rights all the way to a seat on the US Supreme Court. “I adored playing Ruth Bader Ginsburg,” she says of On the Basis of Sex, which was released at the end of last year. “I often think of her as someone I would most like to be like!”

Now in post-production, Jones’s next film follows the story of pilot Amelia Wren (played by Jones) and The Theory of Everything costar Eddie Redmayne as they embark on an historic hot-air balloon expedition. “We’re all deeply proud of the film and it was an incredibly innovative story,” she says. “It’s not like anything anyone’s ever seen before. I adored its originality.”

Making so many films back to back doesn’t leave time for much else, although Jones enjoys “swimming, reading, cooking, seeing friends, and going to the theatre and art exhibitions”. She’s also open to looking beyond acting to a more behind-the-scenes role. “I love being involved in all stages of making entertainment. Having studied English literature at university, it feels very natural to be reading books and articles and thinking, could this be a good film or television programme?” she says. “I love exploring this side of production.”

Also keeping her busy is her work with Clé de Peau Beauté, for which she not only serves as muse and spokesperson but also gets involved in its various advocacy and philanthropic programmes. This year saw the establishment of the Power of Radiance, described by the company as “a multi-year philanthropic commitment that honours inspirational women from around the world whose advocacy for women and girls’ education has led to positive long-term impact on lives”.

“It’s an incredible project to be a part of and a highlight was the Power of Radiance event, where women from all over the world were brought together to discuss and celebrate the importance of female education,” Jones says of the global launch event in March in Tokyo honouring the programme’s first Power of Radiance Award recipient Muzoon Almellehan.

Almellehan fled Syria in 2013 and is the first individual with refugee status to be a Unicef Goodwill Ambassador. She spent three years living in refugee camps in Jordan, where as a 14-year-old she went from tent to tent convincing families that their daughters needed an education.

“Muzoon is an extraordinary woman, and her fight for equal education is breathtaking,” Jones says. “She’s articulate and warm and a very strong woman — an inspiration to be around.” While she may be the “face” that sells Clé de Peau Beauté to audiences around the world, Jones’s involvement in the Power of Radiance programme underscores the fact that she’s much more than meets the eye.

“Beauty is about looking after the inside as well as the outside. It’s about figuring out what makes you feel you and not being afraid to be that person. It’s not always an easy path but true beauty comes from that self-belief.”

Wine & Dine
Clé de Peau Beauté actress Cover Story Felicity Jones
Tama Lung
After stints in the US, Australia and Japan, Tama is proud to call Hong Kong home for the past 10+ years. The lifelong magazine fanatic has worked in news and lifestyle as a reporter, writer, editor and broadcaster, and loves nothing more than discovering new places and interviewing interesting people - except perhaps running after her son, followed by some sushi, sake and an ice-cold Sauvignon Blanc.
beauty travel people DINING ART culture Jewellery