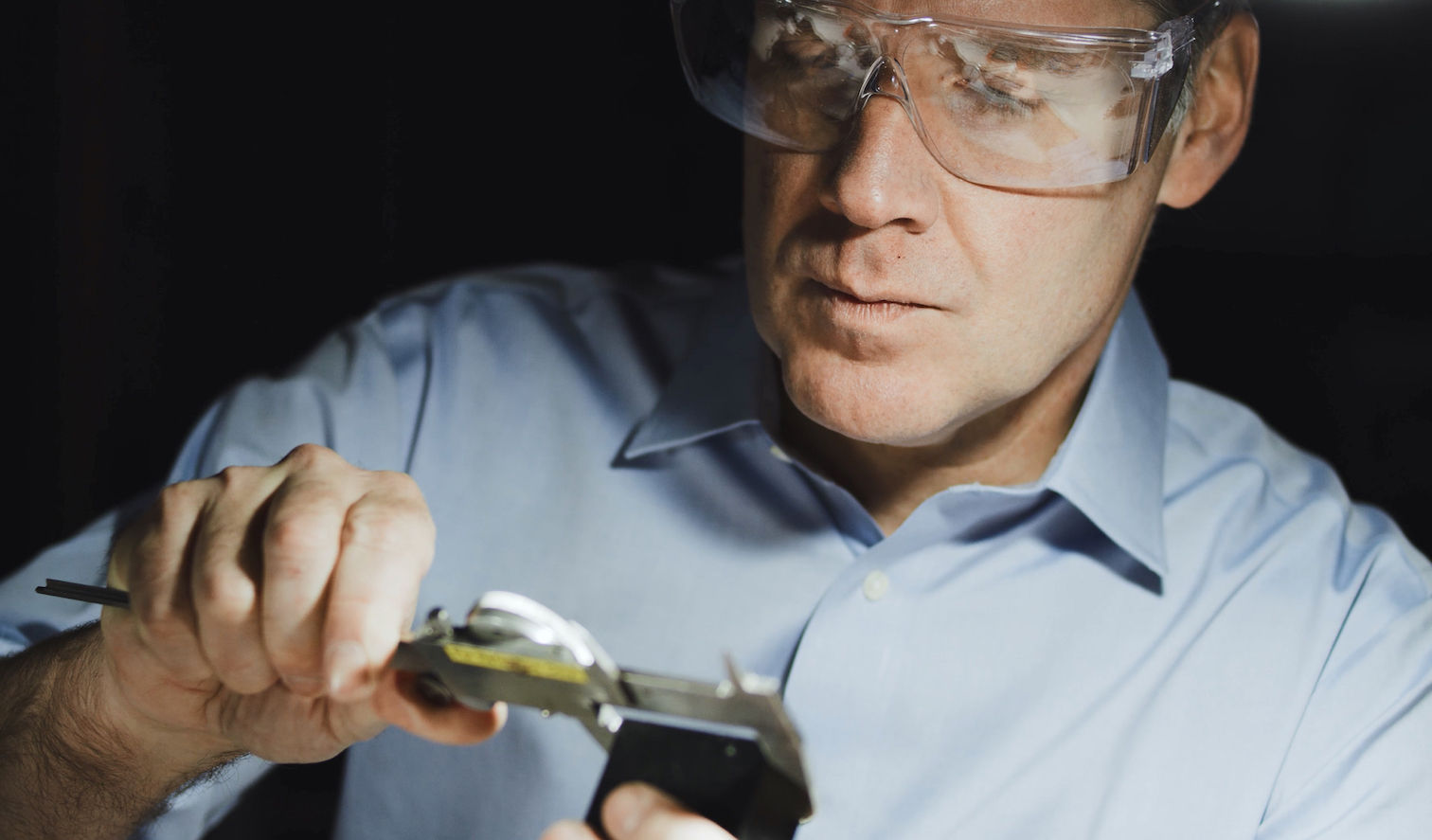 Avid oenophiles will have likely heard about the Coravin already: a device that allows you to drink wine without ever having to uncork the bottle. Now there’s a newer, and even cooler, iteration: the Model Eleven, which made its Asian debut in Hong Kong recently. It’s the brand’s first connected and fully automatic device that links to an app called Coravin Moments. Not only does it enable wine lovers to create a virtual cellar, but it also displays them all on a flavour map, while offering curated pairings with food, music, moods and movies, too.

But perhaps what you don’t know was how it all began. With a background in nuclear engineering from MIT and a career in medical technologies, Coravin’s inventor and founder, Greg Lambrecht, was merely trying to meet his wine-drinking needs when his pregnant wife was unable to join him. Read on to find out just how Lambrecht’s startup life began, what he learnt along the way and the incredibly sound advice he has for others.

Tell us about the business. What does Coravin do?

When I founded the company, I wrote the mission statement on a sheet of paper and it said, “Any wine, any amount, any time, without having to think about when you’re going to drink from that bottle again. Independent of closure, still or sparkling. Faster, easier and more fun than opening a bottle.” That’s still our mission statement. This is what we’re trying to achieve and I’d say we’re about 80%* of the way there. Model Eleven being a big leap forward for us.

*On top of the wine access system, Coravin offers accessories for screw cap wines and an aerator that immediately adds air, allowing your wine to breathe as you pour. The brand has yet to achieve access to sparkling wines.

What’s behind the name, Coravin?

The first name for the company was Wine Mosquito. It was named by my eldest son who was three years old at the time and helped me with the testing. During the launch, this great CEO I had hired said, “We can’t call it Wine Mosquito. People hate mosquitos!”. We talked for a while and I started to recall my Latin, which I studied in high school — I really am that geeky! So, cor is Latin for “heart” and for me, Coravin is about getting to the heart of wine.

Tell me about your best and worst day at work?

One of my best days at work was launch day [of the first product] in New York, July of 2013. To actually take an idea written on a page, to a prototype, to the testing that validates it works, to building the team, to raising the money, to putting the initial product together. That feeling, the elation you have being at that point was incredible.

The worst day… well, I did a blind tasting for [British wine critic and writer] Jancis Robinson, who has one of the best palates in the world. I contacted her and she asked, “What bottles do you have?”. So I laid out 30 bottles of wine on the floor, took a photograph and sent it to her. She told me the row and column of 2 different wines. I grabbed them and flew out to London. It was pouring down with rain and I show up at her house, completely drenched with my bag of wine.

We do the blind tasting [an experiment to prove Coravin does not adversely affect the wine] and she says, “It’s glass 1 and 3, or it’s 2, 4 and 5 — they’re not oxidised but they taste different”. No one else had gotten it right before. I thought, “We’re screwed!” Next, she tried the other wine and said they’re the same and chose wrong. At this point, she typed so much on her keyboard and then looked up and said, “You know you brought the wrong control bottle for your first wine.” I had brought two different vineyards! Same year, same producer, but different bottlings! First I was a failure, and now I’m an idiot. Thankfully, she wrote about the idiot in her article.

What do you do when you’re not at work?

I’m a distance runner. I run mountains — Pike’s Peak [the highest summit of America’s Rocky Mountains] and the Boston Marathon, too. Running keeps me sane. The beautiful thing about running is it’s time on your own and you can focus on one thing. I usually pick a topic before I start my run, and I think about that for however long I’m running. That peace of mind that comes from it, it’s almost like meditation.

Looking back now, what would you have done differently?

We’ve made mistakes, every company does. But I would say two things. Firstly, we should have started earlier. I knew that it worked in 2008 — why didn’t I start the company then? Secondly, I thought being CEO was the most important role, and therefore I had to have it. It wasn’t until a good friend of mine, and an investor, asked, “Are you sure your talents are best utilised that way? You’re creative, you invent, you set the vision, you’re passionate and you sell. But do you like managing the day-to-day operations and the core team?” And it was just the most insightful comment. I stepped back from being CEO and became Chairman and Founder of Coravin. It was in this avenue that I’ve been able to create. Had I been CEO, I probably wouldn’t have.

What advice would you give to someone looking to start up?

The one sin is running out of cash. It’s game over when the cash is gone, so always make sure you have it. And try to have cash before you need it, because raising money when you’re out is the most deluded thing you can do. You should raise twice as much money as you think you need. You’re underestimating, and things are going to go wrong.

Also hire well. Great people make great companies. Great ideas fail with bad people. If someone isn’t working out, do not hesitate to terminate. If you don’t, it will bring down the team and your business. You cannot tolerate that. As a startup you don’t have the extra time. It’s not personal; they just aren’t the right person for the job. Move fast!

If you can, raise money from people that have the same incentives as you have. Because the more aligned they are, the better the future will be. The difference can cause conflict, so try to gauge the true incentives of investors to make sure they are aligned.

As a child, what did you aspire to be?

My grandfather was a famous weapons designer. First for the German military and then when he was captured by the Americans, for the United States. And he came to me when I was 11 (he passed away when I was 12), and said, “I’ve built enough weapons, you should work on medicine or power. We’ll never run out of our need for either.” That set the tone for my career. I started in nuclear physics and plasma physics, then I worked on medicine. But the core of my thinking was: how do I positively impact the lives of as many people as I can? That’s why I didn’t become a doctor [but rather] invented medical therapies: because they can be used on hundreds of thousands of people, not only one at a time. With Coravin, if they recognise what it can do for them, it can really change their lives. It’s a positive influence and I want to do that as much as possible.

Why is Hong Kong such an important market for Coravin?

There are more ‘better wines’ being poured in Hong Kong on a daily basis than any other city in the world. I wanted to be in a place where there was a large variety of wine, and where people are willing to drink wine from anywhere.

It’s also a ferociously competitive environment, and one of the things I learnt early on is, if you want to learn how to be successful, you need to be in a competitive environment. If you are around the best people in the world, you will raise your game. We have learned so much from this market already. Our manufacturer for Coravin is here in Hong Kong, too. She’s one of the best in the world for consumer home goods.

If you were to invest in another start up, which would it be?

One of the things I’m looking at is distributed agriculture, which is moving the growing of food into the house. It’s happening in New York and Boston, and I think it’s almost there. It will measure and track everything, while tuning elements for the plants’ growth automatically. It’s a really cool concept.

It’s still to make the wine experience faster, easier and more fun. Model Eleven is the beginning of that, and with the software, we can keep making it better. 2019 is the year that we advance the Coravin Moments app.

Do you consider yourself successful?

Not yet. We still need to reach people. I measure success as the volume of wine poured through Coravin relative to the volume of wine consumed on an annual basis. And we are tiny right now. I don’t hope to be 100%, but I’d love to be 20%. If I can get to that, then I’ll consider us successful.

Coravin Model Eleven is available in Hong Kong at selected stores including Watson’s Wine and Enoteca.