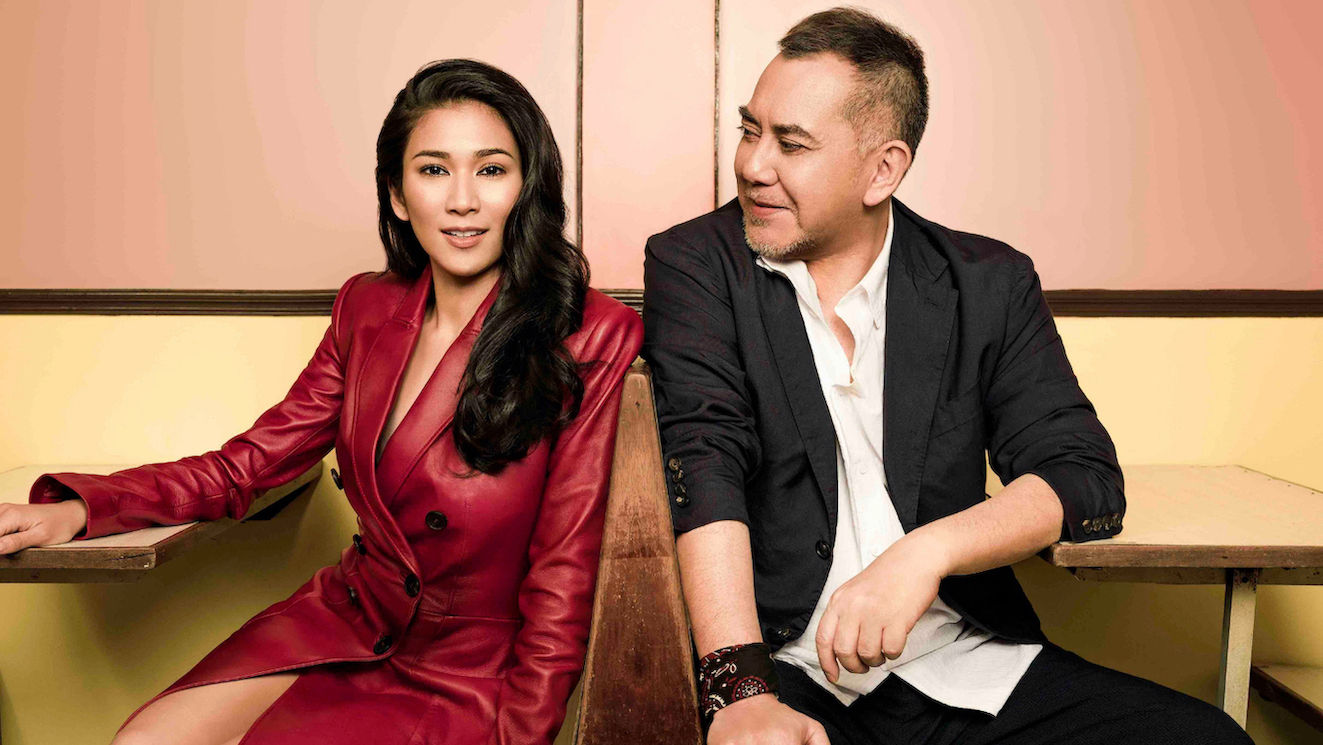 Anthony Wong Chau-sang cuts a curious figure. The Hong Kong star has arrived for his Prestige cover shoot looking relaxed and ready for action but his attention has been taken by the full-to-overflowing assortment of collectibles that surround us.

They are distinctly “Hong Kong”, ranging from an aluminium-sided drinks fridge of the kind still used in crusty village corner stores to posters of film stars whose names have long faded into history. They’re used for such purposes as the backdrops for vintage-style wedding photos, or for fashion shoots (like ours), and Wong has for the moment been taken by a set of drinks glasses that seem to have transported him elsewhere.

“I can remember seeing these sorts of things many times but I’m not sure they were actually in my own home,” says the 57-year-old, smiling. “You know this is a bit like looking at my own history.”

Such reflections have been common for Wong over the past few months. He reveals he has spent a lot of time lately – “Really, a lot!” – thinking back over his life.

Word started to spread about his most recent film — the drama Still Human from first-time local director Oliver Chan Siu-kuen — at this year’s Hong Kong Filmart industry gathering in March and about how Wong’s role in it would provide a timely reminder to Hong Kong of his talent.

Arguably, Hong Kong has never really had an actor so able to master the range of roles Wong has taken on, and been acclaimed for, across more than 200 films. Three times a Best Actor winner at the Hong Kong Film Awards, Wong has tried his hand at everything from an utterly psychotic serial killer (Ebola Syndrome, 1996) to a social activist (Ordinary Heroes, 1999), to a simmering triad thug (Vengeance, 2009). His oeuvre makes for a line-up best described as enigmatic, a phrase quite often used when people are trying to pigeon-hole the man himself.

We’re here today as a direct result of that latest star turn from Wong, as the curmudgeonly, wheelchair-bound man who forms a bond with the caregiver played — to equal acclaim — by first-timer Crisel Consunji.

Both actors are being shot, separately and together, and their ease at interplay reflects an obvious closeness the past year has brought, as the journey has taken them from pre-production, to the filming, to the release and on to the reaction to Still Human as it swept the 2019 Hong Kong Film Awards, garnering the Best Actor Award for Wong, Best New Performer for Consunji, and Best New Director for Chan.

“I never really expected it, to be honest,” Wong says, as he waits for his turn in front of today’s cameras to begin. “I didn’t have much on with work. It’s been that way for a while. But I read the script and I just liked it. I didn’t really ask for any money. I thought it would be a small film, nothing more. Now look.”

Still Human has exceeded all expectations since its April release. It was made on a next-to-nothing budget but has returned a few million dollars for investors, giving a beleaguered local film industry a welcome boost of confidence as small Hong Kong filmmakers increasingly find their work buried under a flood of foreign blockbusters.

Back at the start of May, Wong and Consunji, along with director Chan, arrived in Udine, Italy, for the Far East Film Festival unsure of how their film might be accepted by an international audience. They walked away with the festival’s top prize.

Wong also picked up the festival’s Golden Mulberry Award for outstanding achievement, later posting on social media that the Udine experience had been the greatest of his life.

“This has really been out of all my imagination and all my expectation,” Wong says. “I’ve really been able to feel a truth in the applause, a respect, and that has been really touching.”

Local media have claimed 2019 to be the year that marks Wong’s triumphant return, but if he was hiding anywhere it was in plain sight. There’s been a procession of supporting roles, as well as parts on TV and in theatre, the medium that gave Wong his start.

What has made Wong relatively anonymous, at least in media terms, has been the lack of fanfare surrounding his recent work, ever since an apparent ban was placed on him by Chinese authorities for his support of the 2014 Occupy Central protests.

“I don’t really know,” is Wong’s explanation. “You know, I’ve never officially been told anything. Nothing. So I’ve just been carrying on, you know, living my life.”

Little wonder Wong came out in support of the local community, as it’s one that has always returned the love, ever since he first appeared on the big screen in the Angie Chan-directed My Name Ain’t Suzy back in 1985.

Wong grew up in Wan Chai with his mum, his English father having left when he was a small boy. He worked his way through classes at the Hong Kong Academy for Performing Arts before training at the TVB Studios — as has been the case for so many Hong Kong actors — turned him into a ready-made star. Roles in such seminal local hits as John Woo’s Hard Boiled (1992) and the multiple award-winning Infernal Affairs (2002) saw the city take him to heart.

Those hearts were touched with the story of Wong reuniting with his father’s side of his family last year, brought together via social media. His father had passed away but Wong found he had brothers, and a new sense of his own identity.

“So much has happened to me lately,” he says. “I’ve found a new family that I didn’t know I had. It’s like a new chapter for me now, like I’ve turned a page.”

Crisel Consunji’s story is almost as old as cinema itself. “It’s sometimes hard to believe it has happened, and all so quickly,” she says. But Tinseltown was built on the belief that dreams can come true, that people can be plucked from obscurity and turned into stars. Just look to the classic 1937 drama A Star is Born, with a young Janet Gaynor playing the actress who appears out of nowhere to become an overnight sensation. There have been three repeat performances, starring Judy Garland, Barbra Streisand and, most recently, Lady Gaga as the unknown hopeful who rises to the top.

Those films, it must be noted, were all about pure fantasy. What lifts the story of Consunji out of mere fiction and into modern reality — and what gives it a distinctly Hong Kong flavour — is how she landed her first film role and how the 34-year-old Philippine actress has reacted to the commotion that’s swirled around her debut.

In Still Human, Consunji plays a domestic helper coming to terms with an often difficult relationship with the man she’s employed to care for. But before she won the role — and before she was named Best New Performer at the Hong Kong Film Awards and was nominated for Best Actress — Consunji had given the entertainment industry away. Her life for years had become focused instead on the early learning centres she’d opened in Hong Kong with her husband. But then Consunji was discovered, famously now, via Facebook.

“A callout was being sent around the Philippine community in Hong Kong and one particular friend said, ‘I think this has your name on it,’” says Consunji. “It was the nth time that I had received it so I thought, ‘Whatever, let’s go and see what happens.’”

Consunji’s talent won her the part but it sounds as though fierce determination was among the deciding factors. Once she’d read for the role, Consunji realised it was one that would help build on the conversation — both in Hong Kong and across the world — about the role domestic helpers and caregivers play in modern society. Then, there was no saying no.

“I really felt, after speaking to [director Oliver Chan] Siu-kuen, that here was a director who wanted to produce a narrative that was fair, that was empowering,” she says. “It wasn’t going to portray my people as people who didn’t have the opportunity to take hold of their lives on their own. Part of the push factor was thinking: what if someone took on the role and didn’t have an understanding? How would the story be portrayed? When the discourse began, who would be responsible to actually give a bit more of an accurate description of the topic? After reading the script I felt like I wanted to be involved, even if I didn’t get the part.”

Consunji’s own narrative begins with a stage career during childhood that took root with Manila’s Repertory Philippines theatre group. Film, back then, was never a factor.

“Those days, there wasn’t a lot of mobility from one medium to another,” she says. “Now, across the world, it’s more fluid. Before, if you worked in the theatre you were labelled, and there weren’t many independent films. My family always told me to remember that this might not be my life or my livelihood. There just weren’t the opportunities.”

At 23, Consunji moved to Hong Kong to take up a role at Disneyland and she would perform there for around three years in such productions as High School Musical.

It’s the type of all-round grounding — acting, singing, lead roles and support — that directors cherish. Someone able to fill any vacancy, and with a passion for their craft. It was that emotion — passion — that drove Consunji towards the next chapter in her life when she decided her life was ready for a new challenge, and when she talks about working with children it’s impossible not to be swept up in the thrill she finds in helping shape young lives.

“As an artist you live and breathe wanting to bring a little more empathy into the world — and that’s why I got into teaching,” she says. “That’s how we can make a difference. At our centres every day is a new day and every day is special. Entrepreneurship in Hong Kong is really tough. It really is sleepless nights. Hopefully now I can find a happy medium as I want to do both — work at our centres and be an actress again. This whole new world has opened up so it’s made me wonder if there’s something here that will allow me to stay true to my values. Now that I’m here I want to learn more.”

Sit with Consunji for any length of time and you’ll walk away convinced that’s how, despite all the acclaim that has followed her debut film role, she seems to have remained so grounded. Over a break during our cover shoot, she recounts how, on returning home to Hong Kong after travelling to Italy for the Far East Film Festival, the mother of one of her students rushed up to her, super excited.

“She said to me, ‘You must be so proud!’,” recounts Consunji. “And I’d been so swept up in the film that I thought she must have been talking about that. But she was talking about the opening of our new school. She didn’t know about Italy or the awards, she was more concerned with real life. So, you know, in terms of getting carried away, I think I’ll be fine. The other side of my life keeps my feet on the ground.”