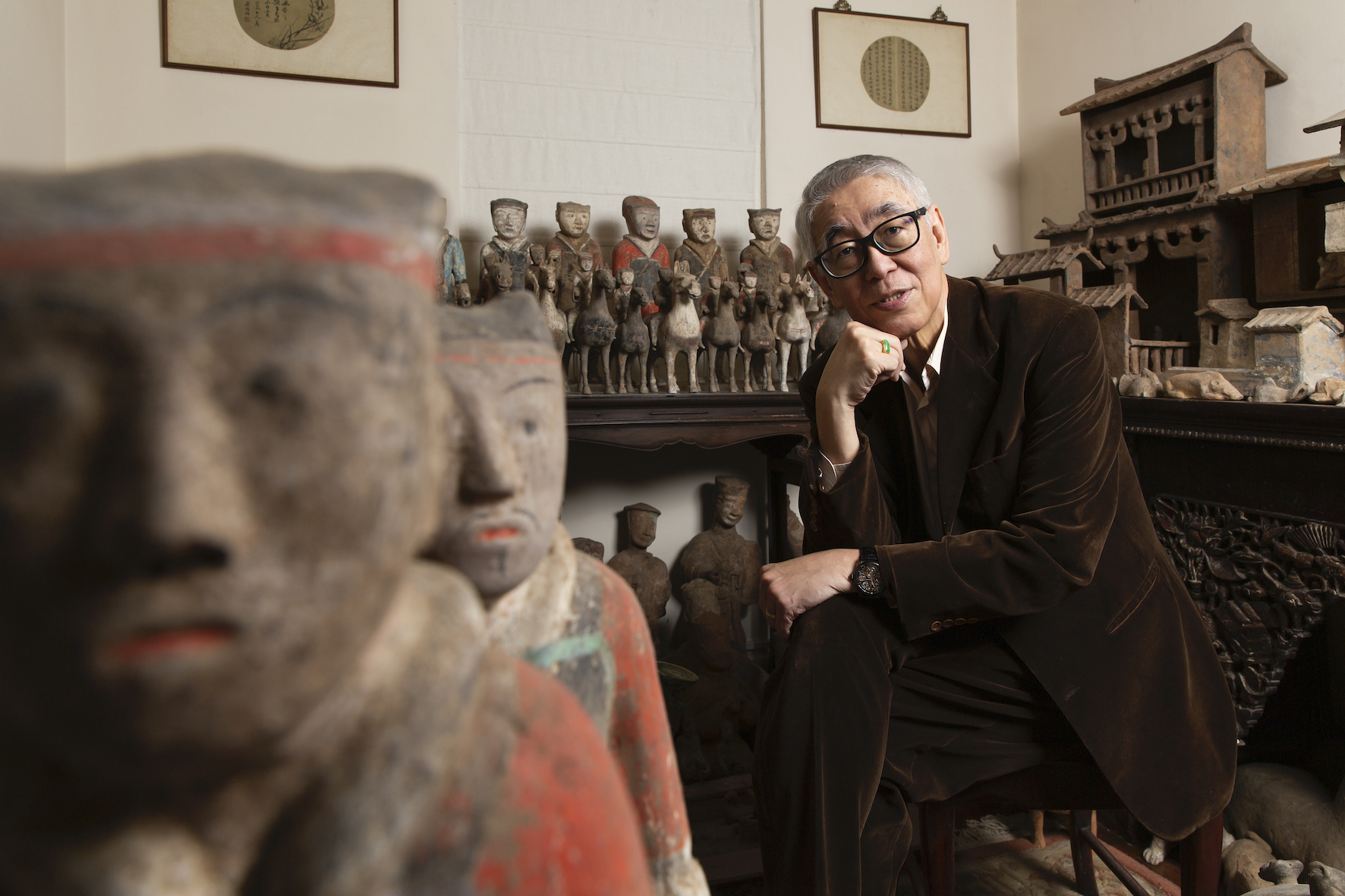 People & Events
Jon Wall
Editor-in-Chief
Sign up to get the latest luxury and lifestyle news delivered to your inbox.

From the outside, Robert Chua’s home looks no different from any of the other large detached residences that line one of Kowloon’s most exclusive thoroughfares. On the inside, however, it’s packed so full of antiques that it’s almost as if a sizeable cohort of the emperor Qin Shi Huang’s terra cotta army had decamped from its pit on the outskirts of Xian and marched on Hong Kong to occupy most of Chua’s living room – not to mention the veteran TV producer’s conservatory, garage and even some of his bedrooms.

Evidence of the expatriate Singaporean’s near-legendary career in Hong Kong broadcasting, however, which included launching TVB’s live variety show Enjoy Yourself Tonight – a local institution that was first aired on November 20, 1967 and continued to screen every weekday evening for 28 years – is by comparison almost non-existent. In fact, Chua doesn’t even appear to own a TV set, though he later tells me that there is one upstairs in his bedroom.For those who are unfamiliar with the man, Chua first pitched up in Hong Kong in 1967 after he’d been hired as a senior production executive by the fledgling TVB. Aged just 21, he’d already gained experience in broadcasting both in Singapore and with a local TV station in Adelaide, Australia.

It was, says Chua, “a troubled time”. The then-British colony was still roiled by riots that had spilled over the border in the wake of China’s Cultural Revolution, so it might not at the time have seemed the ideal moment to be setting up a TV station. Moreover, considering his young age, his new employers were, to put it mildly, taking a risk.
“When we first started,” Chua admits, “nobody thought we’d succeed with a live show every night, but Enjoy Yourself Tonight [which first aired on TVB’s second day of broadcasting] turned out to be a runaway success. I don’t know how it happened, but I was blessed that Colin Bednall, an Australian who was the station general manager, gave me the opportunity. An Asian general manager would never have done that. Imagine, if I’d failed – he’d have lost his job immediately. He’d allowed a 21-year-old lad to run this thing, so I’m forever grateful to him.”
I suggest that Chua must have been extraordinarily self-confident to helm a live show when at the time most such programmes were pre-taped. “The very first time we did the show, I wasn’t worried or excited,” he replies. “Most people would be very nervous, but somehow I wasn’t nervous at all. Had I been, I’d have made a lot of mistakes, but I wasn’t. I don’t know why. We’d done some testing beforehand, so I suppose the self-confidence I had made it easier.”

In the event, Enjoy Yourself Tonight would become one of the world’s longest-running live-TV variety shows. “It went out five nights a week, Monday to Friday, for 28 years,” says Chua. “And I don’t even read or write Chinese – I’m lucky that I understand Cantonese, so I was able to manage it because of that. At that time, Singaporeans in Hong Kong were [considered] just a little bit below Hongkongers – we were just like little brothers. So I was lucky I managed to get the confidence of the people I was working with. Some of the big movie stars at the time were almost my father’s age, but I’m very lucky that I was able to work well with them and they were never disrespectful to me.”
Chua left TVB in 1973 and set up his own production company the following year, and by the end of the ’70s he was among the first to explore advertising opportunities in the mainland when the latter began to open up, placing commercials for watches, cigarettes and alcohol with Guangdong Television and China Central Television in 1979. He and his wife Peggy, his former assistant at TVB whom he married in 1974, began travelling to China on business and it was during their trips to Beijing that their interest in Chinese antiques was piqued. They’d visited shops and museums in Hong Kong, but that was nothing compared to what they discovered in the Chinese capital.

“We started collecting after I started going to China in 1979,” Chua explains. “Both my wife and I began buying antiques, but it’s hard to remember what the first thing was that I bought. Everything was so cheap. I had no idea we’d end up with such a huge collection.”
By that time the couple were living in Kowloon Tong, but it was after they moved to their current address during the 1990s that the size of their antiques hoard began to grow to its current proportions, which are now so vast that there’s barely space in their sizeable home to move, let alone do anything else. Chua points to the pair of large armoires in his living room that fit so tightly into the alcoves at each side of the fireplace – itself festooned with figurines – they might have been made to measure. One is packed full of mirror-matched vases, as well as shelves and shelves of tableware, the latter bought in the 1970s and 80s at a branch of Chinese Emporium for “tens of dollars” – nowadays, he says, they’d cost HK$4,000 a pair.
“For the very rich,” he says, gesturing towards a shelf groaning with cups and saucers, “this is nothing, but for me it’s simply about pleasure. I never buy antiques for their value; I never think of them as investments. I just love them.”
Of the many hundreds of figures of humans and animals, the Buddhas, the urns and vases, the intricate representations of courtyards and fishponds, and the chests and armoires that litter his home – a trove that encapsulates up to 10,000 years of Chinese history stretching back to the Stone Age and even earlier – are there any pieces that Chua values above all others? “If you ask a parent, ‘Which is your favourite kid?’ they couldn’t say,” he replies. “It’s the same with these. I love and I enjoy seeing them. It’s all about appreciation for the people who made them, who were shirtless and bare-footed, poor people, but the work they did was so beautiful.”

Now in his seventies, Chua isn’t slowing down, though these days he’s involved less with producing TV shows than opening restaurants. “I’m still interested in creating and producing programmes,” he says, “but unfortunately these days I don’t see enough passionate people in television. You need passion to manage and run it, because if it’s run by the money people then it’s only
about money. You need to be creative and have a lot of balance. It’s the content that important.”
So two days after my visit to his home he’s flying off to Singapore, where he’s about to open the first of his Joy Luck Teahouse kiosks, a franchise designed to introduce a genuine taste of Hong Kong – in the form of egg tarts as popularised by the tiny Hoover Cake Shop in Kowloon, along with pineapple buns, curried fish balls and milk tea – to the city of his birth. “The kiosk’s going to be very small,” Chua says, “so we want to maximise it by being good and simple. I want to have hundreds of kiosks, so to maintain the quality I have to make it as simple as possible. In a way I call it a social enterprise, because I’m going to give all senior citizens a 50 percent discount on my milk tea, and also because I’m going to offer franchises to young people as well as retirees.”
Even today, more than five decades after Enjoy Yourself Tonight first screened on Hong Kong TV, Chua still finds that the show opens doors for him. “When I meet people,” he says, “especially those in their sixties and seventies, they recall the show with fondness. It’s like the couple [who make the curried fishballs] in Kowloon City. We’ve become very good friends – and why? Because they were big fans of EYT and they know who I am – and now I’m getting their support for my latest venture and they’re giving me their recipe.”