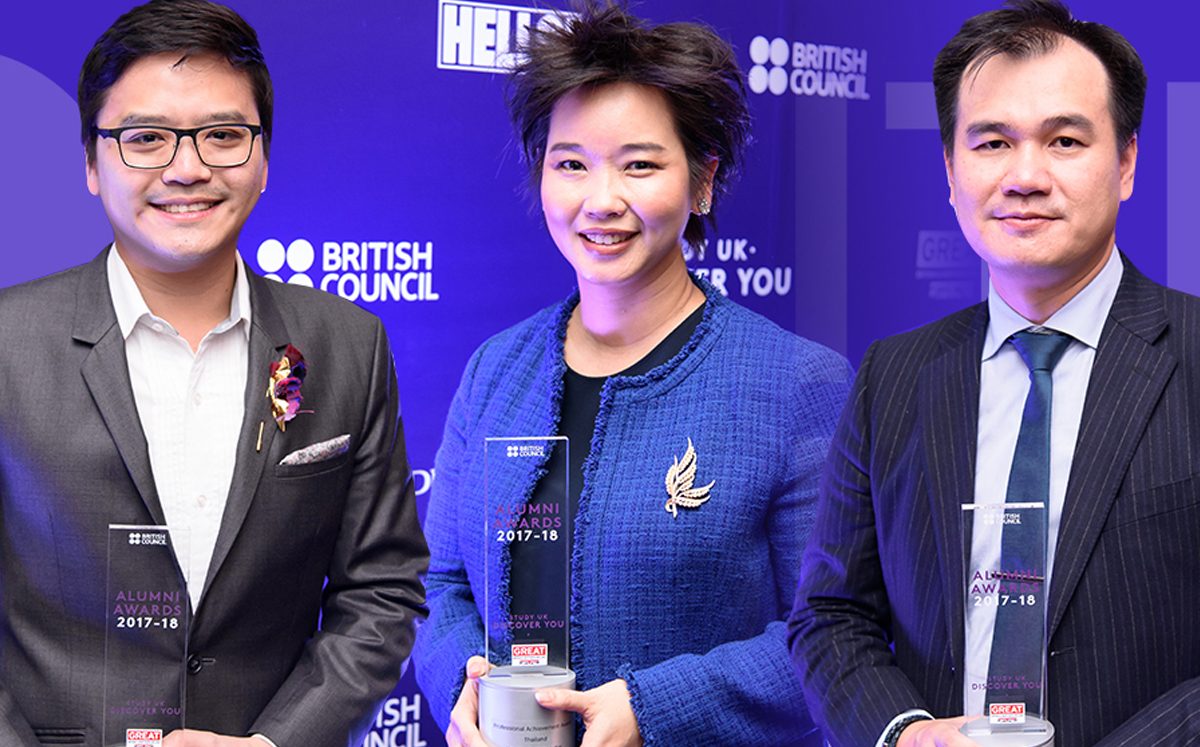 During an award ceremony at the Residence of the British Embassy, Bangkok, the British Council announced the recipients of the Study UK Alumni Awards 2018 in Thailand. Recipients of the award were recognised for their outstanding achievements as business professionals, entrepreneurs, and community leaders, as well as for their important contribution to strengthening collaborative ties between the UK and Thailand.

In total, out of the 12 finalists, three winners, plus the winner of the “popular vote” Facebook competition. For the first time, the public were given the opportunity to vote on their favourite alumni story, and the positive impact created for both countries as additional recognition was given to the winner of the popular Facebook vote.

For the twelve inspiring stories by the finalists that describe the personal impact of a British education and what it meant to them, click here.

The prominent international award celebrates UK higher education and the achievements of UK alumni from all over the world. Having received more than 1,700 applications from international UK alumni in a record 123 countries, representing more than 140 UK higher education institutions across the UK, the award is now in its fourth year. Following comprehensive interviews with a judging panel, recipients were selected for three award categories: Professional Achievement, Entrepreneurial, and Social Impact.

This award recognises alumni who have distinguished themselves through exemplary leadership in their professional field and was presented to Dr Uracha Ruktanonchai, a graduate of the University of Nottingham. Dr Ruktanonchai is a researcher at the National Nanotechnology Center (NANOTEC). Her work involves research and development in Nanotechnology, and technology transfer to the industrial and service sectors to increase Thailand’s competitiveness. She is currently working with young researchers, helping them to continue their research career and promote the country’s science and technology capability. She uses science and technology as a tool for collaboration at international levels.

This award acknowledges alumni who have made an exceptional contribution to creating positive social change. It was presented to Professor Agachai Sumalee, a graduate of the University of Leeds. Professor Sumalee is a world-class academic in the field of transportation, and during his successful career, he has worked in the UK, Hong Kong, and Thailand. He has successfully transferred his knowledge of the concept and its technology to improve Thailand’s transportation system including reforming the bus regulation system in Bangkok, the National GPS system for road safety, and the All-Thai taxi system, as well as serving on several government committees.

This award highlights alumni who have played a leading role in business innovation and was presented to Arch Wongchindawest, a graduate of the University of Warwick. Named in the Forbes “30 under 30” list, Arch is a driving force behind Thailand’s burgeoning social enterprise sector. Arch is the founder and CEO of socialgiver.com, Thailand’s leading social enterprise, helping over 180 leading brands give back in a more effective and sustainable way.

Thailand’s “Popular Vote” Award, as voted for by the public audience through the British Council’s Facebook page, was presented to Dr Pimkhwan Bunjitpimola, graduate of Imperial College London. As vice president of Navamin 9, Dr Pimkhwan Bunjitpimol works creatively to find innovative, goal-driven solutions to transform her organisation. She co-founded Vital Glow: Skin and Aesthetic Center and collaborates with leading professionals to bring in groundbreaking skincare technologies. For Dr.Pimkhwan, Imperial College London fosters her to be a lifelong learner and instills a commitment to expand cultural competence within her organisation. This eliminates barriers to health care service delivery at the Hospital which caters 50% international patients. She is destined to be the anchor for changes in healthcare industry and brings Thailand to the forefront of medical tourism at global level.

The Alumni Awards were developed by the British Council and UK universities, and launched by the British Council in September 2014. Applications are open to alumni currently residing in any country outside the UK, who have studied in the UK, at an officially recognised provider of UK university degree level study for a minimum of one term or semester, or who have been awarded a full UK degree level qualification (or higher), by a UK university, within the last 15 years.

For further details on the Study UK Alumni Awards please refer to: www.britishcouncil.org/education-uk-awards.