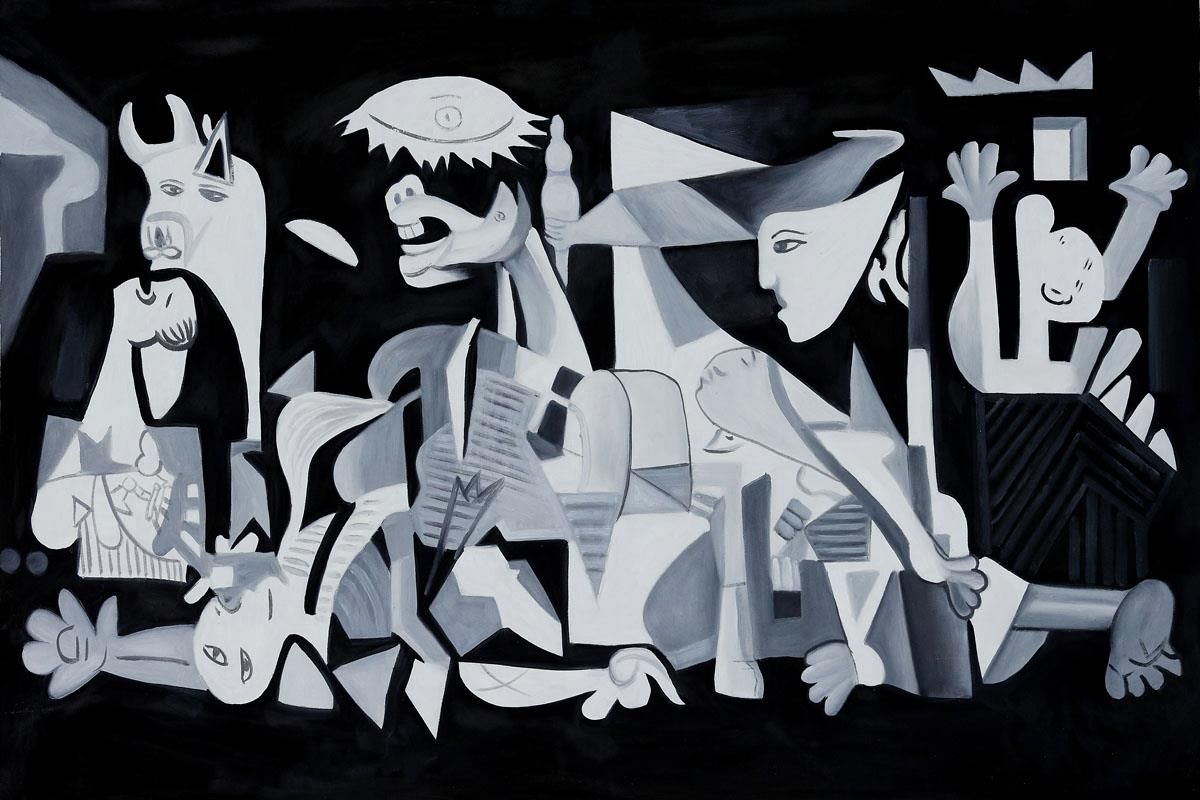 The 1937 Paris World’s Fair was intended to celebrate modern technology. But the inclusion of the Picasso’s most famous work, Guernica, at the Spanish pavilion turned it into a mass protest against fascist war crimes. Two years before the outbreak of the second world war, Pablo Picasso expressed his outrage against a full-scale modern air raid against unarmed civilians during the civil war in his native Spain with painting Guernica, an enormous mural, displayed to millions of visitors at the Paris World’s Fair. It is still regarded as the 20thcentury’s most powerful artistic indictment against war, and remains just as relevant to civilians around the world who continue to be caught in today’s conflagrations. The work’s emotional power comes from its immense size of 349 cm times 776 cm (about 11ft tall and 25ft wide). It is a painting challenges rather than accepts the notion of war as heroic.

Picasso was asked by the newly elected Spanish Republican government to paint an artwork for the Spanish Pavilion at the 1937 Paris World’s Fair, the official theme of which was a celebration of modern technology. Instead, Picasso’s giant painting was overtly political, which as a subject he’d shown little interest in up to that time.

The Spanish Civil War began in 1936 between the democratic Republican government and the fascist forces, led by General Francisco Franco, who were trying to overthrow them. The painting is based on events on April 27, 1937, when Hitler’s powerful German air force, acting in support of Franco, bombed the town of Guernica in northern Spain, a city of no strategic military value in the heart of Basque country, in the first ever-aerial saturation bombing of a civilian population.

The raid’s purpose was to test a new bombing tactic to intimidate and terrorize the resistance. For more than three hours, 25 bombers dropped about 50,000kg of explosives and incendiary bombs on the village, reducing it to rubble. Twenty more fighter planes strafed and killed defenceless civilians trying to flee. Fires burned for three days, and 70 percent of the city was destroyed. A third of the population, 1600 civilians, were killed or wounded.

The Spanish Civil War attracted the participation of many artists and writers, mostly to the Republican cause. British artist and activist Felicia Browne was among the first to die.

News of the atrocity reached Paris several days later. Eyewitness reports filled local and international newspapers. Picasso, sympathetic to the Republican cause, was horrified by the reports. Guernica is his memorial to the massacre, and after hundreds of sketches, the painting was done in less than a month before being delivered to the Fair’s Spanish Pavilion, where it became the central attraction. Rather than the typical celebration of technology people expected to see at a world’s fair, the entire Spanish Pavilion shocked the world into confronting the suffering of the Spanish people.

Later, in the 1940s, when Paris was occupied by the Germans, it was reported perhaps apocryphally that a Nazi officer visited Picasso’s studio. “Did you do that?” he asked the artist while standing in front of a photograph of the painting. “No,” Picasso replied, “you did”.

The Republican forces sent Guernica on a global tour to create awareness of the war and raise funds for Spanish refugees. It travelled the world for 19 years before it was loaned to The Museum of Modern Art in New York for safekeeping. Picasso refused to allow it to return to Spain until the country “enjoyed public liberties and democratic institutions,” which did not occur until 1981 following Franco’s death. Today it is on permanent display in the Reina Sofia, Spain’s national museum of modern art in Madrid.

Sign up to get the latest luxury and lifestyle news delivered to your inbox.
Picasso Spain Madrid national museum of art Pablo Picasso Guernica
Christopher Donnolley
Christopher Donnolley arrived in Hong Kong in 1988 from Australia intending to work “for a year or two” – and is still here, having worked as a journalist at the city’s newspapers and magazines, covering daily news from the city and China desks, op-ed pages and features departments. In between was a seven-year hiatus as a corporate writer and spokesman for the Airport Authority Hong Kong. At Prestige he returns to the topic (and first love) that he covered straight out of College: the Arts.
ART culture DINING