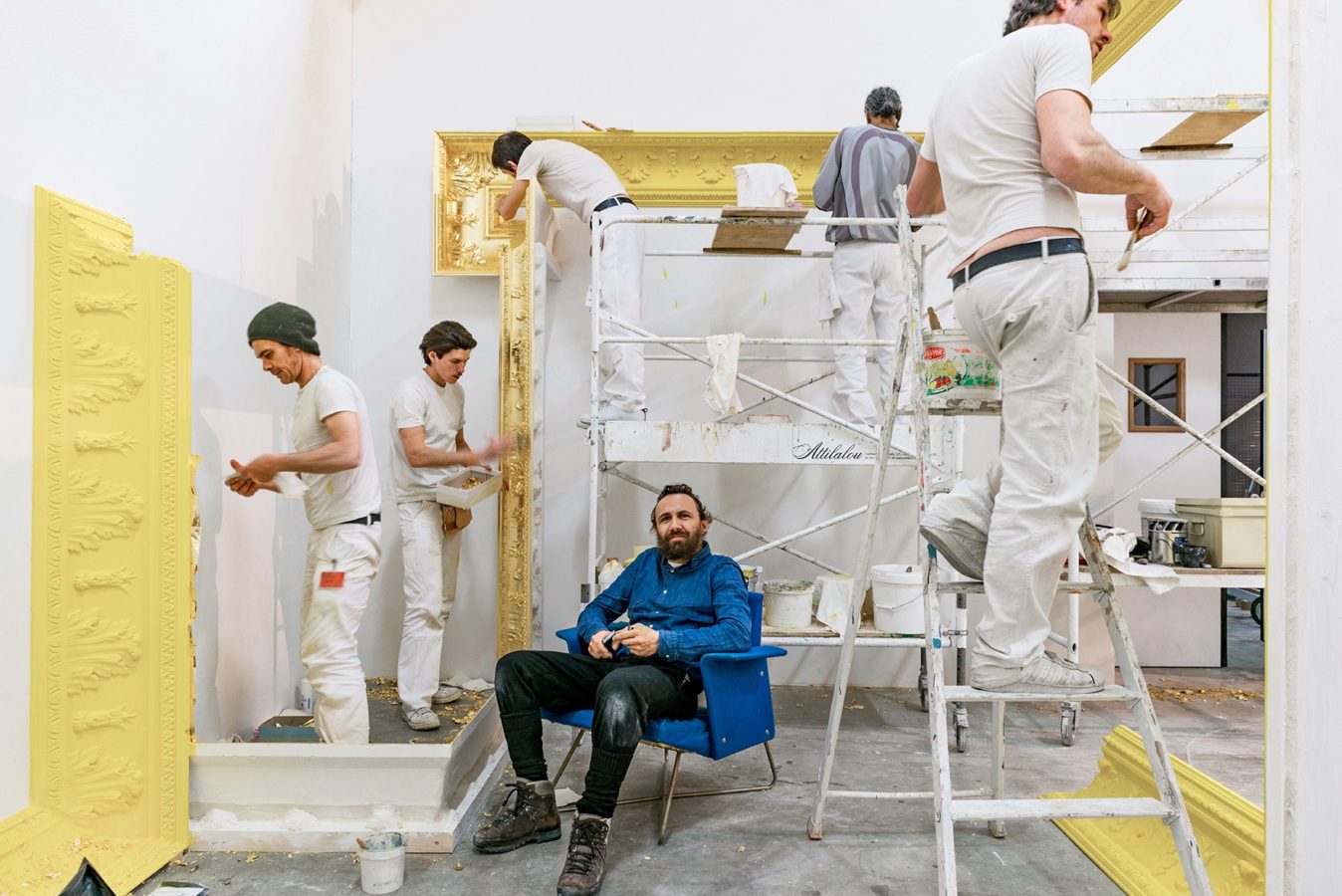 At the Museum of Lille last year, artist Mathias Kiss showed an in situ mirror pool installation, a sculptural work called Besoin d’Air. The view from the glass atrium ceiling of the museum shows a distorted picture of blue sky and white clouds, reflected and refracted on mirrors on the floor below. This peculiar sky, inspired by 18th-century painting, is dramatic and emotive, like its museum surroundings, with shimmering mirrored and pixelated basin. Was this poignant poetry and clever manipulation of materials or a more foreboding premonition of our world today, turned upside down?

At 47, Mathais Kiss is an unconventional and celebrated artist who wanted to escape the protocol of French academic craftsmanship, after first mastering it as a teenager. Now his work, although decoding and juxtaposing the rules of European classicism, also pays tribute to French design codes and artisanship.

His irreverence having paid off handsomely, Kiss today shows at respected European art and design fairs and museums. He exhibits in the likes of Galerie Alain Gutharc in Paris and Gallery Elle in Zurich, and has worked with French luxury brands Boucheron, Cartier and Hermès, creating radical, artful ways of displaying their wares.

Last year Kiss landed a lauded solo show at Mobilier National — Les Gobelins with “carte blanche” to reinterpret “gold”, a favourite theme. Three years earlier, he took part in the exhibition Double Je, at Palais de Tokyo, in Paris. The resulting Golden Snake piece was inspired by his teenage craftsmanship and building apprenticeship years, having to make “straight ledges in perfect levels in kilometres at the Louvre”.

“I dreamed of breaking that down, of giving them back their freedom. They were locked in the rigidity of our bourgeois and backward classicism, so I kept the aesthetic codes dead and frozen in resuscitating them organically.”

The artist says that his childhood carried “no good memories … which prompted me quickly into delinquency, which led me to learning, which led me to anger, which then led me to my personal reflection to find meaning in these dogmas and social dictates.” Kiss started an apprenticeship as a glazier-painter at the age of 14, after being expelled from school, which brought him into the craft-design industry for 15 years, a foundation that informs his artworks now.

Kiss joined the Compagnons du Devoir circle, with which he studied historical restoration skills while working on some of France’s most monumental cultural institutions, including the Louvre, Notre-Dame and Opéra Garnier. He graduated from his time there as a first-rate craftsman, but after so many years restoring various monuments around France, Kiss felt the urge to do something new — he “needed to find meaning and to reflect on these technical and aesthetic codes”.

From working in construction, renovation and craft on historical buildings to becoming a contemporary artist, it’s appealing to think that Kiss might have had some turning point, a eureka moment.

“There was no turning point, no dazzling change,” he says. “I come from crafts, one stone after another, little by little. It’s been 30 years since I started the journey.”

By bringing handcraftmanship into contemporary art in this era of high tech, Kiss is making a pointed statement.

“It’s conscious and assumed I would even go so far as to say that if there’s only one, I will be that person! I hate new technologies and their negative repercussions on our lives, all that to sell some gadgets to amuse … it’s so sad.”

Unlike so many contemporary artists, he also has no trouble finding pure synergy between commerce and creativity. He reasons that it’s because it’s his whole life and whole profession:

“I’m not an artist on weekends. It’s not a ‘hobby’. I did not have parents who sent me to art school! Whether it’s a brand, an individual or your grandmother, it’s not my business, I don’t cast my audience.”

Kiss was given carte blanche for a project in the Palais des Beaux-Arts in Lille last April, which he describes as total happiness and a dream.
“It’s the Palace of Fine Arts. All my culture that I tried to transmit in a tribute to a more contemporary audience. Continuity of my work on the painted heavens in museums, but with my ‘sauce’, in my way!”

His particular way of reconstructing everything he learned in his past relies on modifying and freeing old codes. Kiss forms a new art language that’s contemporary, avant-garde and often poetic. It’s with this language that the artist reflects on the past and questions the future, often referencing architectural and interior-design systems.

Since 2009, his sculptural objects based on subverted codes of living and housing have made waves in the creative field. Those objects and in-situ installations bring into consideration the environment around it, and the perception of space. His Miroir Froissé mirror pieces confront these ideas more literally, with images reflected, distorted and infinitely multiplied on surfaces.
“The materials don’t remind me of anything, but as I trained as a glazier I know how to work with this material. What interests me is the challenge of the techniques, to break the single thought.”

His process of creating new artworks requires no new research, because he sees the past 20 years in craftsmanship as that – at times frustrated – research. Now, he says, “I have 1,000 things to say.”

As it’s all too clear, Kiss is partly so exciting because he’s not your typical artist. No formal fine-art education, no abstract pretensions of the world of art, Kiss also defies expectations with the fact that he used to be a boxer. It’s a career that he’d return to if he wasn’t an artist. “I’m angry and need a challenge,” he says. Perhaps Mathias Kiss is the ultimate post-modern European artist – playing with and mixing two different heritages and worlds, on so many levels.

Everything links arts and boxing, Kiss explains. “The beauty of the gesture, the training, the years of practice, the modesty that allows research and questioning, and above all, what is a boxer if not a guy who climbs upon a naked scene to shine? It’s a bit like an artist, right?”