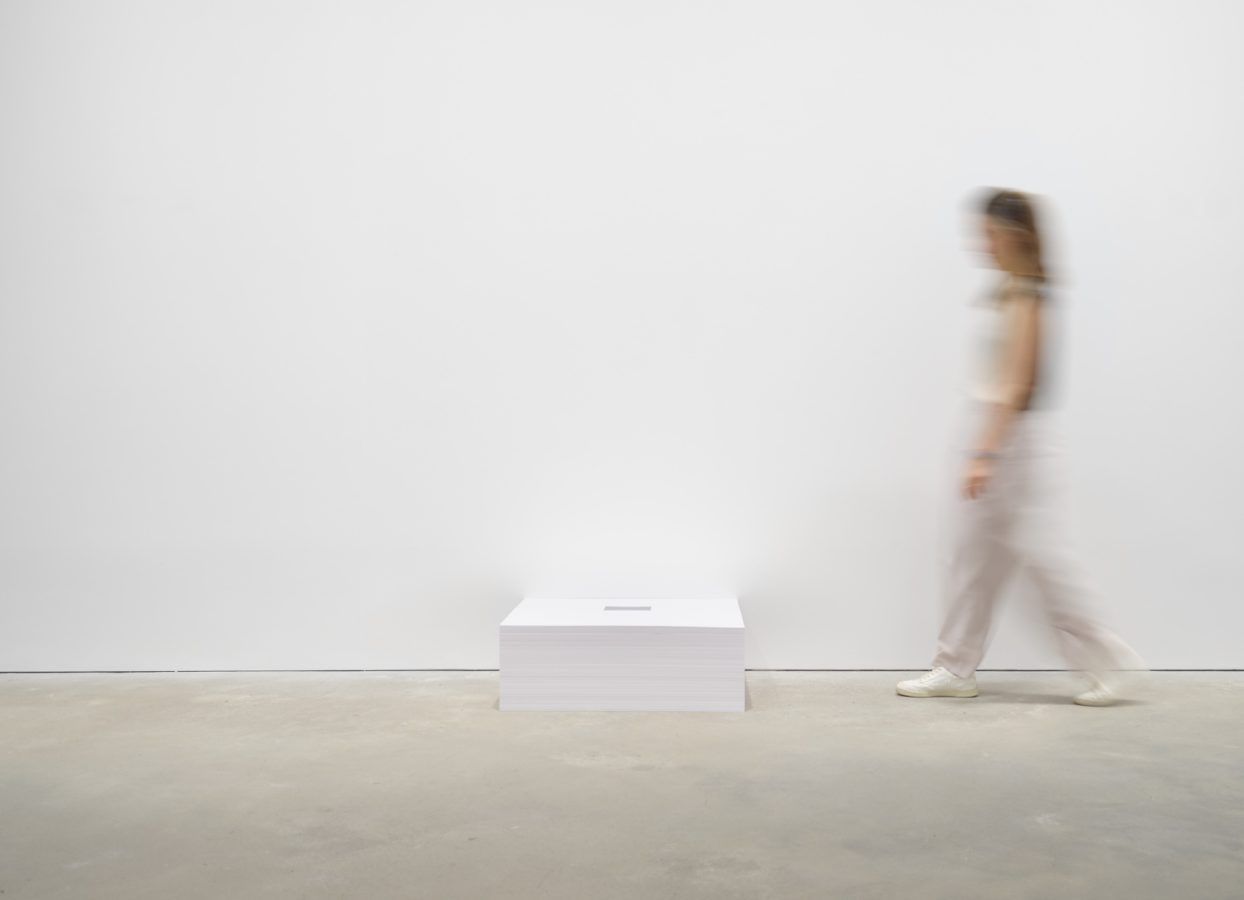 If you’ve never encountered Felix Gonzalez-Torres before, you might at first be struck by how simple his works are. The first time I saw his work was at David Zwirner’s gallery in Hong Kong just last month. “Untitled” (Ross in L.A.), 1991, was a short rectangular column, which on close inspection turned out to be pieces of white paper with a grey rectangular print on it, unassumingly placed against the white wall in a neat stack.

It wasn’t until the gallery’s Senior Director Leo Xu walked over to explain Gonzalez-Torres’ art that it dawned on me what the work was about. People were encouraged to take a piece of the work away with them. Described as “print on paper, endless supply”, the sheets of paper will be replenished by the gallery as the stack diminishes. There’s an intriguing layer of engagement between the artist and the viewer. More than that, Xu tells me, the curators too, are asked to engage with the work and make up their own minds as to how they want to show the work. In this case, Xu was tasked to choose everything down to the quality of the poster paper he wanted to use for the work.

Gonzalez-Torres’ works are showcased as part of a group exhibition at David Zwirner from now until July 31st. Titled The Real World, the exhibition features paintings, sculptures and installations from the 1990s and early 2000s. Gonzales-Torres’ works, along with contemporaries like Raymond Pettibon, Jason Rhoades, Diana Thater, Rirkrit Tiravanija and Lisa Yuskavage challenge the relationship between art and everyday life by incorporating non-traditional subjects, formats and ideas into their works, relentlessly bringing up themes of identity, gender, sexuality, consumerism, status quo and the environment.

Ying Kwok Takes us Through a Year of Exhibitions, Highlighting the Priceless Role of a Curator
Pursuits
Hauser & Wirth’s First Global CEO Ewan Venters on His Role and the Gallery’s Sustainable Agenda
Pursuits

Also on show at David Zwirner are the artist’s puzzles. The photographic puzzles, created between 1987 and 1992, are displayed wrapped in plastic, representing the artist’s interest in the juxtaposition of fragments and the whole. The complete puzzles showcase a mix of mass-produced images as well as his own personal photography.

Gonzalez-Torres’s work has always been very influential for the contemporary artists who are living and practicing today. His conceptual works often touched on subjects of love, friendship and loss, but in an extremely profound way, using every day objects such as paper stacks, candies and lightbulbs to talk about really heavy subjects. The majority of Gonzalez-Torres’ works were created during the AIDS pandemic in the 1990s, at a time when his closest circle of friends were deeply affected and suffering. Gonzalez-Torres himself, died in 1996 at the age of 38 from AIDS-related causes as well, making his works even more poignant.

When I ask Xu about his own personal favourite work by Gonzales-Torres, he says it’s “Untitled” (Perfect Lovers), 1991. The work consists of two clocks side by side and directly visualizes life and the feelings and relationships between people in the most essential form over time.

But his first experience with the artist’s work is “Untitled” (Portrait of Ross in L.A.), which consists of commercially available plastic-wrapped candies. Like the paper stacks, it asks the viewers to take a piece away with them. But the meaning behind the spilt pile of candies was anything but light-hearted. The work represented the late artist’s late partner, Ross, who was dying from AIDS, and depicted the gradual decline of the body.

That same work also had a huge impact on curator Tan Xue of Tai Kwun Contemporary, who saw it in New York some years ago. “I found it really profound that he managed to talk about this really painful and heavy moment through the most light-hearted and approachable material,” she tells me.

Tai Kwun Contemporary is also displaying Gonzalez-Torres’ works at an exhibition titled “trust & confusion”, which deals with the theme of certainty and chance, and will unfold and evolve in episodes until December 5, 2021. Light Strings is the selected work, and is one of the largest pieces Gonzalez-Torres has created in the series, using the lightbulbs to represent the passing of time as the lights gradually dwindle and shut off over the course of the exhibition.

Utilising everyday objects in art isn’t groundbreaking, and it’s been done since Marcel Duchamp, but what’s unusual about Gonzalez-Torres’ work is the level of engagement he expects from both the audience and the curator. While most artists would hate to give up control over their work, Gonzalez-Torres happily hands the reigns over to the gallery and the installer.

Tan says, “This idea of creating a relationship directly with the audience is a very new format. Suddenly, the relationship of the visitor and the artwork went beyond the person and the object.”

It’s an evolution beyond just showcasing everyday objects as art. “For Felix, most importantly, he’s suggesting a new social relationship through the work, through people who are involved in the work, and that is very rare for his time.”

Gonzalez-Torres’ work is also currently showcased by Para Site in an exhibition called Curtain, in collaboration with Rockbund Art Museum. The featured artwork is “Untitled” (Loverboy)”, which consists of two sets of gauzy light blue curtains hanging in front of open (or closed) windows. It is currently displayed at Soho House from now until July 25th. “Visitors at first might regard it as a domestic object,” says Celia Ho, one of six curators of the exhibition. “However, there are also multiple perspectives from which to read this work, such as the opacity of the material which casts a blue glow in the space, evoking the visibility of queer body/identity in everyday life.

“The blue color specifically chosen for this work often refers to love and beauty in Gonzalez-Torres’s oeuvre, but it can also be interpreted as the melancholy and vulnerability of queer identity,” she says.

That three exhibitions are concurrently ongoing and showcasing Gonzalez-Torres’ most recognisable works was a mere coincidence, but perhaps at the same time, against the backdrop of the Covid-19 pandemic, gives a new social dimension and meaning to his works.

At Tai Kwun, Tan agrees that the social and personal impact is very similar. “His work is so open-ended. It has such an openness that invites the opportunity for regeneration. And that’s what we need at this time.”

Her own personal favourite is one of his photographic works. “It’s made in 1992, also called “Untitled” and it’s a photograph of a hand belonging to a male nurse called Mark,” Tan says. “Mark was the nurse of Felix’s partner, Ross, who was hospitalised for AIDS. After Ross died, Felix also became sick and Mark cared for him. Mark himself his partner also died of AIDS, and who happened to be a friend of the artist. So this constellation of people caring for each other is very profound and thinking of how that friendship and that relationship of love manifested through this hand of the nurse. It’s a very simple black and white image.

Says Tan: “It’s a very weighted subject, but at the same time it’s the most minimalistic and simple way of delivering a message.”