Director of Liang Yi Museum Lynn Fung tells us about finding delight in design and how she and her father built Hong Kong’s largest private museum.

In the heart of Sheung Wan on Hollywood Road is a sprawling four-storey, 20,000-square-foot space housing an expansive collection: Ming and Qing dynasty antique furniture, bejewelled boxes and miniatures from the likes of Cartier; rare European vanity cases and exquisite hair accessories from Japan’s Edo and Meiji periods. From the outside, the stark white-and-black-accented building is almost unassuming.

“For the space, I was inspired by these eccentric old European houses that you can visit, and this eccentric old man takes you around, telling you some quite unique memories. I think those experiences are much more fun and interesting,” explains museum director Lynn Fung, who left a career in lifestyle journalism to devote herself to building the family project, which opened in 2014.

She pushed hard for a fresh and more experimental exhibit concept – and a more sensory way of engaging younger visitors. Since viewings are by appointment, she convinced her father to allow guests to interact with and touch the sturdy antique wooden furniture exhibits and “instead of small labels with dates, we’ve trained curators to fill you in on the narrative and contextualise things, because otherwise it can get a bit dry … It was a chance to do something different,” she adds. “Not having a traditional museum background meant I was able to do things in a more freewheeling way. I’m not constricted by how things must be done.”

With its open display format, the largest private museum in Hong Kong offers the opportunity for interaction in a way that’s rare among museums. That wider, interactive appeal (as opposed to a traditional academic set up) has reaped rewards. The young venue has carved out a unique niche in the city for locals and visitors alike. “There’s a lot of people on the Mainland who are really starting to appreciate these items … and when I look at the analytics of visitors and where they come from, the French and Americans are really into it as well as locals,” Fung says.

The museum is the joint brainchild of Fung and her millionaire father Peter, the avid Chinese antique collector who personally amassed most of the items over decades. “It started with Chinese furniture, when he bought a pair of chairs on Hollywood Road in the early 1980s,” she explains. “That collection grew quite organically and really slowly over the next 40 years. He was fascinated by all these dealers and family-run stores along Hollywood Road, and at a time when pieces came straight from China to Hong Kong.”

Her father befriended the dealers and would spend the weekends chatting with them – “he’d call it his education”, she says. His penchant for antique Chinese furniture was well served by being a wealthy banker in Hong Kong, where there was early appreciation and supply of these objects, along with a cross section of old Western and Eastern designs.

Soon came the antique vanities, the first being a beautiful old powder compact bought at an auction as a Christmas present for Fung’s mother. And then he developed a taste for European silver: “He’d see a lot of Georgian English pieces in a catalogue and would often pick them out, and that also developed organically.” The collection now totals some 400 classical Chinese antiques and 550 European vanity cases.

When the family debated what to do with their big Hollywood Road space, a warehouse, clubhouse or museum were all in the running. The daughter’s preference for a museum prevailed and Liang Yi opened in 2014. Usually exhibitions cover the material anthropology of social narratives in Chinese or European history. Some of the most unique pieces address the ongoing dialogue between Western and Eastern design, in movements such as Art Deco or Chinoiserie. “An exhibit comparing French furniture from the Louis XIV-XVI period to Chinese furniture of the same time was really eye-opening for a lot of people,” Fung recalls. “The French courts of the time, even Marie Antoinette’s, had a fetish for all things Chinese and would incorporate elements of it into French furniture with some absolutely hilarious outcomes. I think everyone really enjoyed that.”

The museum’s current exhibition, Beneath the Surface: Chinese Inlay; Japanese Maki-e; and European Cloisonné Enamel, is a departure in that it hones in on purely decorative craftsmanship (as opposed to functional) techniques. Fung points out a personal soft spot for the small but surprising collection of Russian enamelling – “It’s not exactly subtle, but to me extremely Russian and I think that they’re absolutely gorgeous.”

Visitors can also admire one of the strongest Chinese inlay collections in the world, or the remarkable, delicate Japanese maki-e process of sprinkling golden powder on to a surface to create patterns.

“The technique is a bit inconceivable to people – that’s why we ended up showing videos on how it’s done. Words don’t really do it justice,” she says.

Pieces at the museum span from huge Qing Dynasty four-poster beds to scholarly antiques that are worth more than US$1 million. Once the museum opened, the Fungs’ collection of tobacco pipes and Japanese items grew. Among the latter was a trove of Japanese Edo- and Meiji-period hair accessories that they obtained from the daughter of a recently deceased Japanese hairdresser known, says Fung, “as the Vidal Sassoon of Japan”.

“He’d amassed a huge collection of beautiful objects that she didn’t really have a need for, but she also didn’t want to sell them off piece-by-piece, as it was part of his life’s work. She got in touch and we met her, and we were happy to take the whole collection – she was quite touched.” 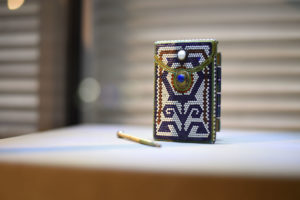 It’s been 18 months since that collection arrived and the museum is now working with Japanese curators see which pieces are of museum quality. These projects make Liang Yi a valuable and evolving “must see” stop for fans of rare Asian decorative arts and antiques.

“We’ve become known as a museum that takes the design pieces quite seriously – we really focus on decorative art and not fine art. Hong Kong is so cosmopolitan and international that people can appreciate Chinese Ming Dynasty furniture next to a Russian enamel plate.”

Liang Yi indeed fills a need and a niche among Hong Kong museums and galleries, which mostly lean towards fine art rather than decorative. “But you know what?” says Fung. “I almost don’t think of it too much as a museum, because to me it’s so experiential.”