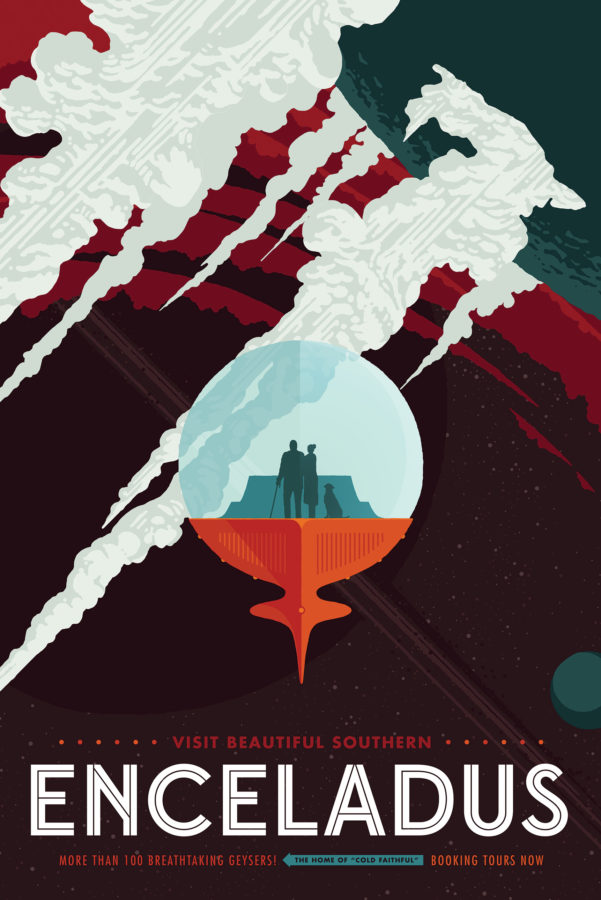 Tour the Galaxy with NASA’s Vision for the Future

Fancy a once-in-a-lifetime getaway with a grand tour of the galaxy, or something niche at the mighty auroras of Jupiter? Our next world is closer than you think.

There’s nothing like a global pandemic to make humanity stop and pause to think about our medium-term future on planet Earth, especially in the face of rising global warming and accelerated depletion of resources. But certain groups of people spend their lives considering exactly this future every day. NASA’s Jet Propulsion Laboratory (JPL) in Pasadena, USA would be one of them.
While were still confined to social distancing and the many ramifications of more domesticated living this seemed the perfect moment to share NASA’s Visions of the Future project, a series of 14 space-tourism travel posters created by artists working with scientists at JPL. The results are mind-boggling and otherworldly, yet so tangible and captivating.

Among the many highlights, see Visit the Historic Sites of Mars, a poster that imagines a future day when we’ve achieved Elon Musk’s – and our – vision of human explorations of Mars and takes a nostalgic look back at the great imagined milestones of planetary exploration that will somebody become celebrated as “historic sites”. NASA’s Mars Exploration Programme seeks to understand whether Mars was, is, or can be a habitable world. Missions such as the Mars Pathfinder, Mars Exploration Rovers, Mars Science Laboratory and Mars Reconnaissance Orbiter, among others, have provided information that provides answers.
If you want an otherworldly experience that makes the Northern Lights look like early silent pictures in Hollywood, the Jovian cloudscape on Jupiter boasts the most spectacular lightshow in the solar system, with northern and southern lights dazzling even the most jaded space traveller. Jupiter’s auroras are hundreds of times more powerful than Earth’s and they form a flowing ring around each pole that’s bigger than our home planet. Revolving outside this surreal oval are the glowing, electric “footprints” of Jupiter’s three largest moons. NASA’s Juno mission continues to study Jupiter’s auroras from above the polar regions, studying them in a way never before possible. It began in 2016 and will finish by July 2021.
Or discover life under the ice, with 360 ocean views. Perhaps most tantalising of any solar entity, is the astonishing geology and the potential to host conditions for simple life that exist on Jupiter’s moon Europa, a must-explore destination. Beneath its icy surface, Europa is believed to conceal a global ocean of salty liquid water twice the volume of Earth’s oceans. And the tug of Jupiter’s gravity generates enough heat to keep the ocean from freezing. On Earth, whenever we find water, we find life. What will NASA’s Europa mission find when it heads for this intriguing moon in the 2020s?
The race is on for discovering life with the tiny Saturnian moon Enceladus. The discovery of its icy jets and their role in creating Saturn’s E-ring is one of the top findings to the Cassini mission. Further Cassini mission discoveries revealed strong evidence of a global ocean and the first signs of potential hydrothermal activity beyond Earth — Enceladus has more than 100 geysers.
But for bragging rights on intergalactic level, NASA’s Voyager mission took advantage of a once-every-175-year alignment of the outer planets for a grand tour of the solar system. The twin spacecraft revealed stunning details about Jupiter, Saturn, Uranus and Neptune – using each planet’s gravity to send them on to the next destination. Voyager set the stage for such ambitious orbiter missions as Galileo to Jupiter and Cassini to Saturn. Today both Voyager spacecraft continue to return valuable science from the far reaches of our solar system.
And right now space tourism is the next-paradigm go-to. Aman Europa or Four Seasons Enceladus anyone? Wish you were here.