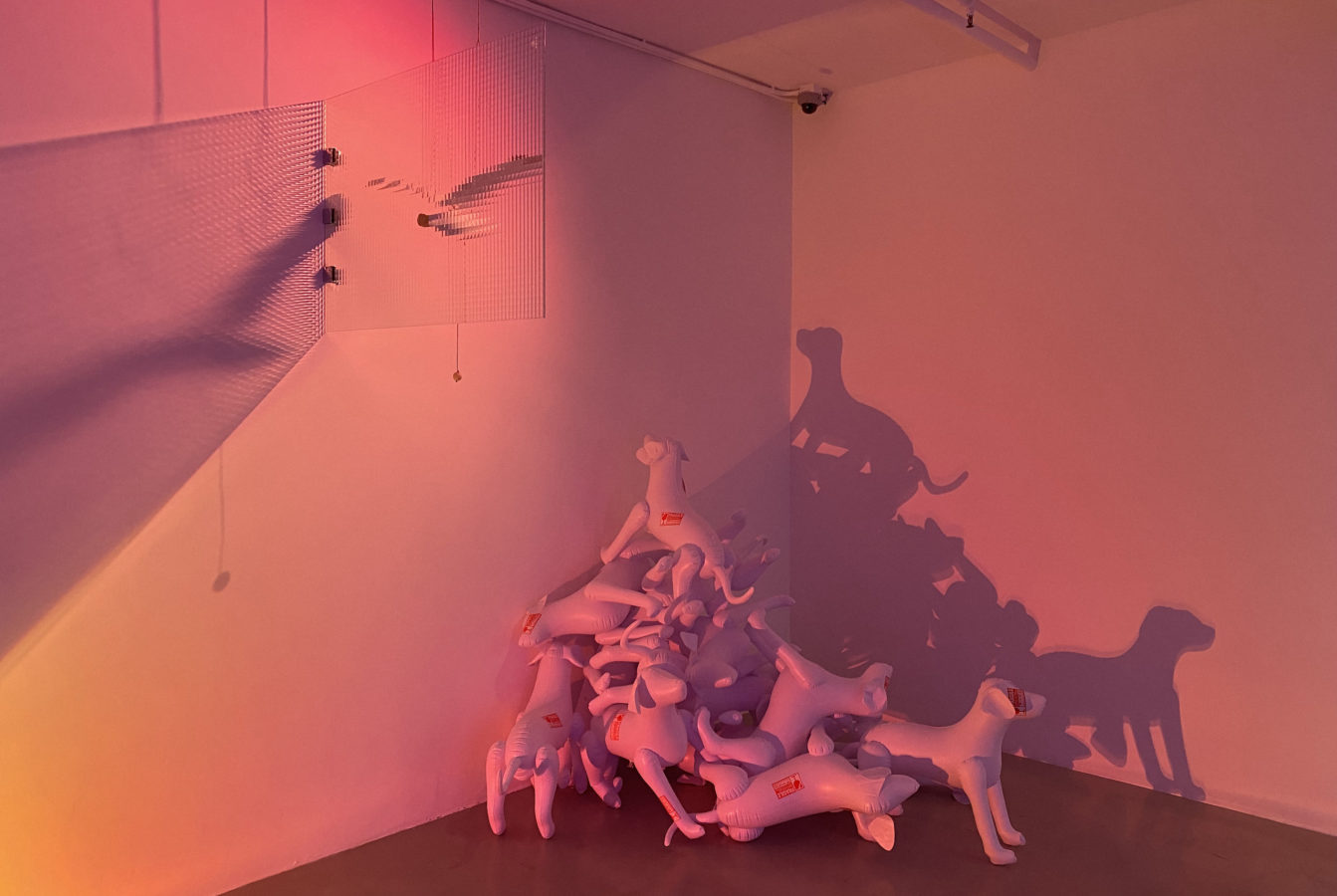 The Ze/Ro exhibition at Ben Brown Fine Arts is sparked by the idea of an increasingly gender-neutral world.

The curator (an artist herself) Shirky Chan tells us about the Hong Kong women artists featured in the show, whose works explore ideas of femininity and empowerment.

When the Hong Kong Art Gallery Association issued an open call for a potential project for its Summer Programme (which connects member galleries with emerging local artists, curators and art writers), Shirky Chan – herself an artist and curator – answered with a proposal centring on women and gender equality. Chan’s idea was to bring together female artists from different generations to explore empowerment, their place within and outside of society, their desired dissolutions of gender, as well as each artist’s unique creative vision.

Impressed with her idea, the association invited Chan to visit Ben Brown Fine Arts’ space at The Factory in Wong Chuk Hang, after which she began to approach women artists about being part of the show.

The result is Ze/Ro, which is showing at the gallery until August 26. A showcase of the works of five local women artists, its title is inspired by the use of the gender-neutral pronoun “ze”, rather than “he” or “she”; thus, in place of the apparent male bias in the word “hero”, Chan suggests the non-gender alternative ze/ro.

Of the five artists in the exhibition, Chan Ka Kiu is the youngest and also the only out lesbian – her work is described by Shirky Chan as “post-90s”.

“I think society is more aware of discrimination and gender is not really a restriction or burden to her. Her works are more carefree. That’s why I wanted to choose cross-generational artists in the same show.”

Ka Kiu was around eight years old when she and a friend were both diagnosed with a bone tumour – tragically, her friend died after the tumour became cancerous. Ka Kiu’s tumour has stayed with her all these years, closely monitored through many trips to the hospital.

“The fear of death,” says the artist, “came to me at a very young age.”

The show features four pieces from her series A List of Things to Bring to Paradise. “These are some little things I think are important for my life right now,” says Ka Kiu. “Maybe I’ll go to hell, maybe I’ll make another series.”

Love, Name of a Bird is a headless flapping wooden bird sculpture suspended from the ceiling, pressed against patterned glass and basking in pink-yellow lighting (“like a sunset, like paradise.”). Ka Kiu says this piece is about the first life she took away, a bird that died after it hit her studio window. She heard a large bang in the night and found its body the next morning. “So this bird,” she says about her work, “will never die.”

Her favourite self-created piece is I Wanna Be Your Dog – inflatable dogs with “fragile” stickers attached. “I think everyone has this moment where you just want to be a pet with a nice owner,” she says. And the sticker? “I wanted to stick this label on myself – fragile!”

Ants, in pencil on paper, depicts minuscule hand-drawn insects. “I had to sharpen the pencil constantly. I think ants are a little, tedious, mundane annoyance, so it’s one thing I’d like to bring to paradise. Paradise will be peaceful and just happiness 24/7, so I want to bring something annoying, something not too horrible.”

Ka Kiu’s other featured work is the first thing you see when you walk into the exhibition – an acrylic disinfection box filled with cleaning supplies perched on a metal shelf, that guests can become part of by placing their hands into glove inserts. Titled Pamper Day, the piece reflects handling toxins, things that are contagious – and how we might feel that there are similar things inside ourselves: “I hope when we think something is bad inside, we take a pamper day and take care of it,” she says.

Like Ka Kiu, the artist Christy Chow also has coloured light on her work. Her piece Baby #1 concerns the first of her two miscarriages. “Of course, I was very sad,” she says. “I suddenly realised, ‘I don’t know who I can talk to,’ because this isn’t a topic that people love to talk about – it’s different from your relative or friends passing away. There’s a funeral, there are formal things you can do to grieve. With a miscarriage, there’s basically no grieving at all.”

The piece is in wool – pinched and rolled and unrolled with water and cleaning detergent – pinned on to silk. “It was very labour-intensive and took me about two weeks. I liked the labour – it was like a meditation, the repetition – it was actually the way I grieved,” Chow says.

The last image she saw of her baby was a black-and-white ultrasound. “I don’t think that their life should be that sad, so I tried to give them colour, vivid colour, but matching the same hues of the black and white,” she says.

Chow’s other piece comes from her Disaster series, which is centred on the female body – Chow aims to talk about real bodies and not the “bodies you see in magazines and ads: perfect and hairless”.

“Everything is so natural about the body – menstruation, urine, breastmilk. No one wants to talk about it, but it’s so natural. It’s almost like when you don’t talk about a disaster. It happens in our world – it’s natural.”

Her work Flood, in embroidery on vinyl, shows a woman (“like a goddess, like a Mother Earth”) relaxed on waves, with liquid pouring out from her. This is Chow’s way of talking about bodies when society doesn’t want to: “If women don’t talk about it, then who will?” she asks.

Further into the exhibit are two video works by Jess Lau, both of which feature her own hands. Drowning, a fixed stop-motion animation on a projector, consists of a drawing of her right hand, erased and redrawn until the paper wore out. Animators act like a god of their animation, controlling its plot and timing, but Lau says she wanted to loosen her “power” and let ‘time’ decide when the animation would end: when the paper was too worn out to be drawn on again.

Her other work, Handnote, is a video poem made of three parts: a stop-motion animation of her hand, black-and-white film photos she took and a series of women’s hands she found in old Hong Kong advertisements. It’s a collage of sorts displayed on a small television set, which, says Lau, gives the video a special texture that connects different women from different times.

According to the show’s curator, Lau’s pieces focus on the most intimate part of her body, the hands. “She’s using her body, the external, to guide or lead to her inner feelings as to what a woman should be.”

Jaffa Lam and Au Hoi Lam are the two oldest artists featured in Ze/Ro, whose works conform to more traditional fine-art media, says Chan. Jaffa is a sculptor, which the curator says is significant as there’s an assumption that female artists can’t – or won’t – undertake laborious work. But for Jaffa, the wooden medium is no restriction.

Lady/Tree in Travel represents Jaffa herself: it’s the same height, width and weight as she is. The sculpture is made of reworked wood and is displayed in the middle of an open crate – in the past when Jaffa had overseas exhibitions she couldn’t attend, she’d send the tree in her place. On the trunk, three Chinese characters say her name, “work” and “wood”.

As a single unmarried woman without children, Jaffa has fantasised about being pregnant at some stage. Oval Chair is made of an old chair frame, stainless steel and recycled crate wood. Seen from afar, it resembles a throne, with a regal air of elegance (“the way pregnant women should be treated,” says Chan). As you approach it, the rounded red-ball shape looks akin to a swollen pregnant stomach. It’s also a reference to Jaffas candies, sweet and warm, even as the cold stainless steel works against that suggestion.

Coloured with mercurochrome, a compound formerly used as an anaesthetic and dye that’s no longer sold because of its high mercury content, Red Balloon is Jaffa’s favourite piece. “A balloon should be soft and fragile, just like women are supposed to be, but actually we’re hard and solid and strong,” says Chan.

Au Hoi Lam’s acrylic paintings on canvas were made 18 years ago. At the time, she’d just completed her master of fine art degree and was experiencing some uncertainty about her future. “The works capture my authentic self at that time,” she says.

Titled Memo, Pink and Blue and The Cradle, the pieces are described by the artist as “transforming inner turbulence through the act of painting, and realising a better state of being”.

Memo and Pink and Blue feature etchings in pencil and ballpen on canvas or linen. According to Chan, they’re “something like a secret code, like diary entries scribbled on canvas. She wants to express but not express at the same time; to let people know what she’s feeling but keep some secrets to herself.”

Editorial Assistant
Sakina is a recovering journalism student. Currently in editorial, you are most likely to find her hunting down new eats on Instagram (halal please!) and lusting after K-Beauty skincare drops.
DINING beauty events