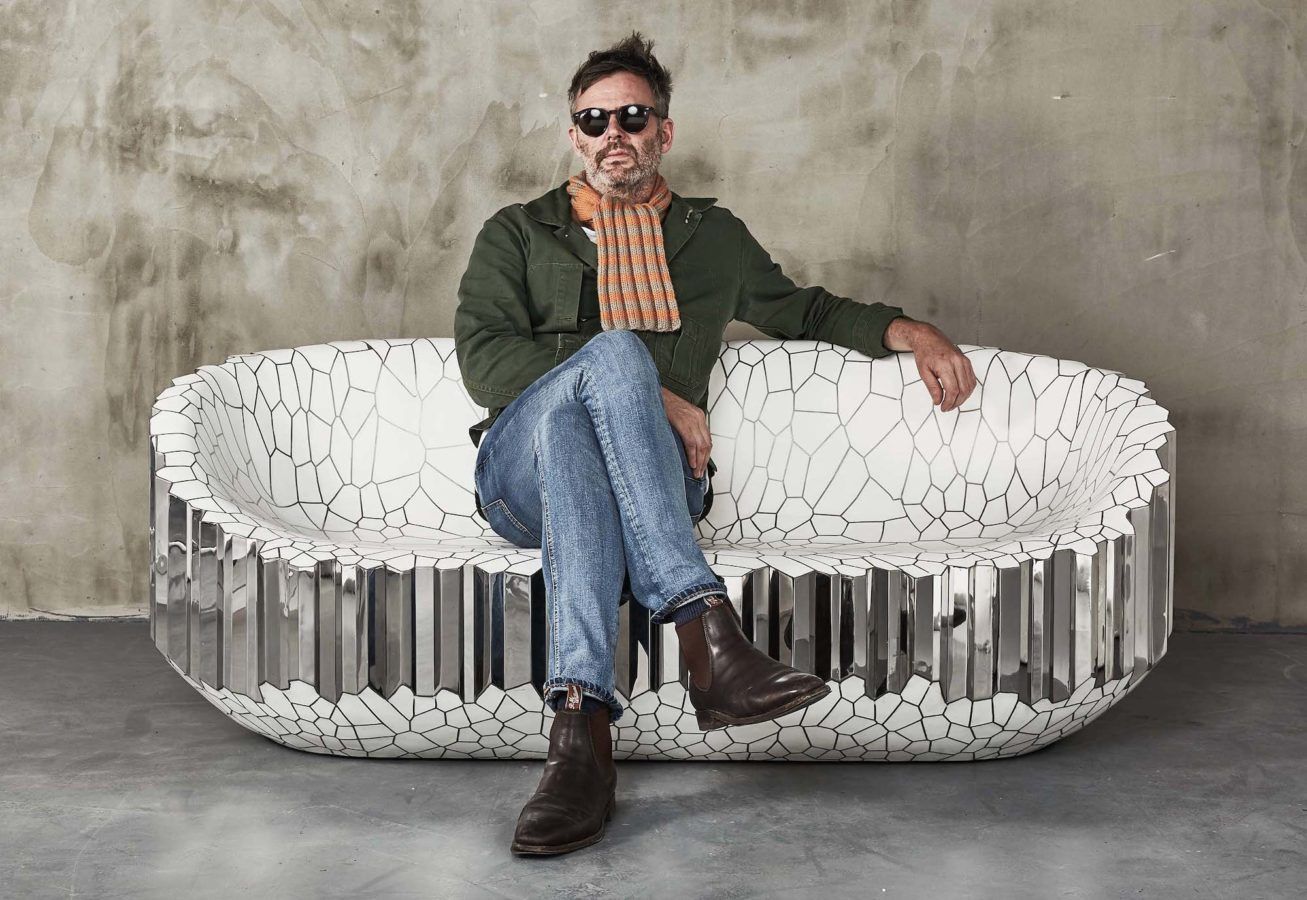 Hong Kong-based British industrial designer Michael Young talks about his affinity with street scavengers, his love for “fiddling about” with hi-tech materials and the astonishing diversity of his output.

In Conversation with Michael Young

I remember I wanted to do something creative because I knew I’d never do anything academic,” says the British industrial designer Michael Young of his younger self, with disarmingly self-deprecating candour. He’s talking from Phuket, where he’s taking a couple of weeks’ rest before returning to Hong Kong, which has been his base since the late noughties. For the last seven months, he’s been holed up in Oxfordshire, England, and is now itching to get back to work, even if that does necessitate a lengthy period of quarantine

“I’d skirted around fine art and graphic design and they all seemed to engage certain types of skills like – well, I knew I wasn’t going to be the next Leonardo da Vinci and I definitely wasn’t the next Jean-Paul Gaultier. But I did have an affinity with street scavengers like Tom Dixon and Ron Arad, whereby I felt very close to the idea of being able to create things myself. It was like it was time for this punk to sing into a microphone, you know, the idea that anyone can have a go, and I guess over 30 years [the act has] just become more highly polished.”

He can say that again. Emanating in an unstoppable stream from his studio in Hong Kong, Young’s output is prolific and almost impossible to categorise, ranging from bicycles for Taiwan’s two-wheeled behemoth Giant and an active speaker speaker system for British sound specialist KEF, to interiors, furniture, refrigerators, lighting, clocks, watches, headphones, shoes, beer glasses – well, you name it and Young has almost certainly designed it.

He’s even re-imagined the classic British Moke utility vehicle of the 1960s (you may perhaps remember renting one of the originals on a weekend jaunt to Macau), and is currently engaged in designing, of all things, a jetski and a snowmobile. I ask him whether there’s a discernible Michael Young style among this incredibly diverse range of projects. “I guess when you look at the bandwidth of work it’s harder and harder to define a ‘Michael Young’ design style,” he says, “but it could be that there’s a level of innovation in the work and the materials – and academically – which comes through in the pieces. Ultimately it’s the manufacturing processes and the typology. Some people
recognise it, some people don’t – it’s not purely form-based work where everything’s based on a shape that I designed 30 years ago. Different people see different things.

“Ultimately, I’ve always wanted each product to speak for itself, and I do delve deep into the manufacturing process. One of the other products that’s launching post-Covid is a carbon-fibre suitcase, which is manufactured in a factory creating carbon-fibre bicycles and aircraft parts, and that’s based on my experience of creating products in carbon fibre for Giant bicycles, and when you package that experience up you can challenge typologies – and that’s really where it comes from. And, I hate to say it, but this piece of carbon-fibre luggage is probably the best in the world!”

Young arrived in Hong Kong from Taiwan almost 15 years ago, having decided that the vast development and production capabilities located just across the boundary in Shenzhen – what’s now known as the Greater Bay Area – provided the ideal incubator for turning the products of his fertile imagination into reality. He’d got his grounding in industrial design while studying at Kingston in the late-’80s and early-’90s, then worked for a while with the British industrial designer Tom Dixon, whose star was then very much in the ascendant, before setting up on his own.

Named by Sir Terence Conran, another UK design guru, as the most inspirational British designer in 1997, Young has collaborated with countless global brands and during the past 25 years his work has been exhibited in major art and design institutions around the world.

He tells me that some of his ideas, such as a set of Taoism-inspired aluminium-foam vases he created for the art incubator Gallery ALL, were provoked by production processes he’s encountered while producing other products. “When I’m around factories in China I do try to have a little play, and that play has helped fuel other areas of the studio,” he says. “Perhaps the materials are used in aircraft, but I like to have little fiddle around with them. It also keeps your brain fertile and a little multi-disciplinary. I guess there’s time to play with these things, and we’re in the right part of the world [to do so].

“A few years ago design wasn’t really globally accepted and everyone was a bit cautious about stepping outside their general footprints that they’d built to service certain types of industry. But when design became more important, these people are looking for other opportunities, and it’s really escalated over the past 10 years. In Shenzhen and the Greater Bay Area there’s this metropolis of highly developed factories and whatnot, and they’re all swapping and cross-pollenating with each other.”

It’s an environment he’s certainly looking forward to getting back to, plus the fact that there’s a recently completed home that needs living in, even though over the years he’s become used to working with clients from a distance. “Shortly after I arrived in Hong Kong, I started making things for companies around the world – in the USA and Japan – and I’ve spent the last 30 years working from hotels,” he says, “and in the last year everyone’s been doing it. Covid’s actually been really good for me because it’s broken the cycle of being Asian focused. At the moment we’re designing some micro-housing in Japan, for an old friend of mine. I haven’t been there, I haven’t met the architects, but they know we can hack it out – and that’s a much larger-scale project than what we usually take on.

“But I happen to be located here and I also have a studio in Shenzhen, which I haven’t been able to get to in a couple of years. I’ve been in Europe for seven months, and I’ve been designing for a company based in Oxfordshire, but I’ve got sick of the cold and having pies for lunch in a pub.” The next couple of months will see the unveiling of Young’s second collaboration with KEF, “an active floor-standing speaker, super-high-quality and one of the most slender products on the market – simple and concise. KEF like our approach and we already have a relationship, so we worked hand-in-hand with their product team. I come up with the concepts and then we work with their engineering team to fit the gubbins in. It’s definitely a team effort, a democratic approach to design. Also, their engineers have been in the business for more than 50 years and they’re second-to-none, so we rely on their resources.”

As to the notion of a jetski and a snowmobile zooming off from the Young drawing board, even he seems baffled by the incongruity, though he’s evidently now learned to take such things in his stride. “How did I land in this place?” he wonders. “Oh, a snowmobile? OK! Ultimately, there’s a lot of people around the world asking us to do a lot of different things for reasons that only they can line up in their own heads. You never know what people in what industries want to work with you and for what reasons. And that’s the beauty of my profession really.”

(Here and featured image: Michael Young and a steel and white Enamel Lounge Chair he designed for Gallery All, first exhibited at Design Miami/Basel in 2019)