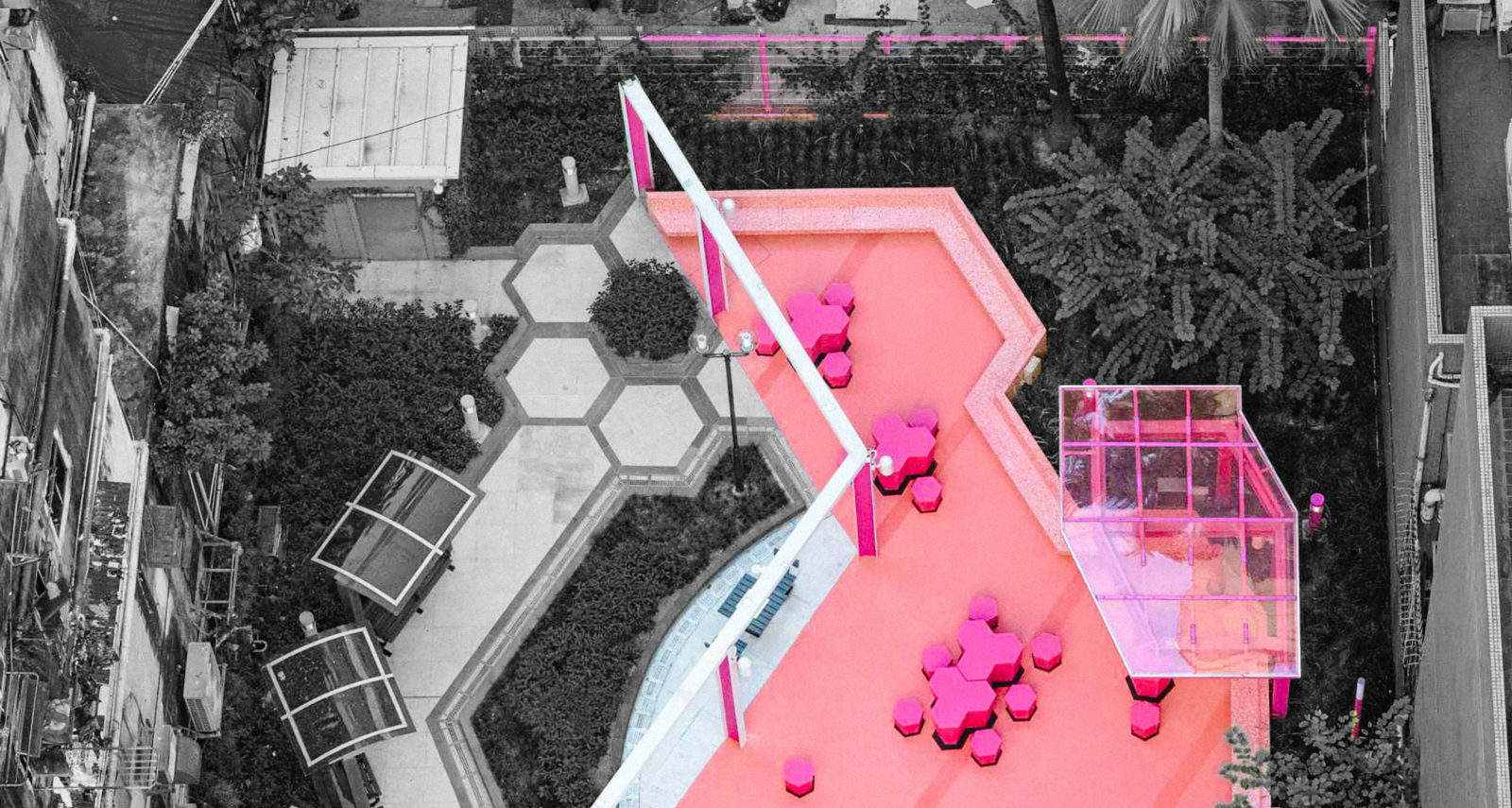 Nestled between sub-divided residential Tsuen Wan high rises, the transformation of Yi Pei Square Playground from downtrodden to the now-colourful strip of land filled with graphic shapes and play areas for all has been breathtaking to see. Then there’s the bright pink, ultra-modern Portland Street Rest Garden, emboldened with hexagonal tables and seating, becoming a “Hong Kong destination” and an unlikely Instagram sensation.

Both are among four sites selected for radical redesign and regeneration under the Design Trust Futures Studio’s microparks initiative, which is aimed at transforming formerly dilapidated public areas with high foot traffic and urban density into fresh, positive spaces for an interactive local community.

“You have different skillsets and designers getting involved and, now it’s open for the public to enjoy, you have the elderly sitting there, you have children playing, fashionistas coming to support us and government officials knocking at our door asking how they can further support us.”

The project, curated by Yiu, debuted in the spring with Yi Pei Square Playground, following the concept of The Communal Living Room, in which a team of young designers collaborated and were mentored by architect Mimi Hoang.

“This was the outcome of site research and analysis, various public-engagement sessions and collective efforts from public and private agencies, aiming at introducing this unique ‘communal living room’ in Yi Pei Square for local residents and encouraging the concepts of inclusive and intergenerational play,” explains Yiu.

During the pandemic and with limited travel in Hong Kong, there’s been a renewed focus on how local spaces serve the people who live nearby – especially potent in our dense, skyscraper-filled city filled with cramped apartments. The appearance of these playful, vibrant microparks in populated areas of Hong Kong are little, bright beacons of positivity in uncertain times.

The dilapidated Portland Street Rest Garden in Yau Tsim Mong got a similar treatment with a half park design, inspired by the ethos of the New York Highline. The result: a bright pink space with terrazzo features and moveable modular fuchsia-hued furniture, so people tailor the space to their own needs, while lush plants, many of them seasonal pink, spark joy and positivity.

Uplifting colours, shapes and a healthy dose of playfulness was a result of local designers challenging each other, with several involved in each design.

With eyes on Hong Kong and China’s Greater Bay Area, Yiu is instrumental in steering the Design Trust NGO, which she co-founded in 2014, a few years after joining the Ambassadors of Design board in 2008. Aside from her NGO work, the Columbia and Princeton graduate is also a founding partner of ESKYIU, the award-winning multi-disciplinary architecture and research design studio based in Hong Kong, which has taken on high-profile clients such as K11. However, it was her work as chief curator of the 2009 Hong Kong and Shenzhen Bi-City Biennale of Urbanism/Architecture on the West Kowloon waterfront that first put her name on the Hong Kong design map.

“I co-founded Design Trust with a collective vision from a lot of leaders and friends. Grant-giving wasn’t enough – we wanted to get the international community involved,” says Yiu. “I’ve always been involved with schools and non-profit organisations, so wanted to bring that energy into Hong Kong.”

Her biggest push was establishing the flagship Design Trust Futures Studio programme in 2017, based on mentor-mentee workshop relationships, looking at various urban developments and thinking about values in society, while empowering the positive value of the design of heritage and public spaces in the region.

“It’s multidimensional, like going back to school for everyone, not just young designers, but also working alongside various stakeholders – from the grassroots and government officials to policymakers and superstar mentors – with very specific goals in mind,” Yiu explains.

“I always believe that Hong Kong is a model city, just because of the bifurcation of nature and the city with pockets of extraordinary culture, but the government obviously needs to do better at creating friendlier, inspirational, practical and comfortable playgrounds and parks – it’s about human dignity.”

It seems the microparks spirit has caught on though, with the government announcing around 170 public spaces to be regenerated in coming years, though the Design Trust won’t be involved in most of them. Those in the city can look out for how the two remaining pilot spots – Hamilton Street Rest Garden and the Sitting-Out area under Hill Street Flyover – will evolve.

Yiu’s ambition at the organisation is to go beyond just seeding grants and research fellowships for young designers – she aims to place Hong Kong at the heart of the global design dialogue while engaging the public. Fostering a sense of wellbeing on home turf isn’t just about belonging but often how much say we get to influence its evolution.

“I’ve had this passion about how to involve the community beyond different disciplines,” she says. “The concept is to bring people together, to have an active voice and participate and transform our city.” The journey has been a rewarding one but also “quite a challenge”, Yiu admits.

As a young architect, she spent significant time working in New York with inspirational mentors and starting her own practice with her husband. They then moved to London, where they taught at the Architectural Association, before eventually landing back in her hometown. Yiu’s attitude of wanting to work towards a 360 multidimensional approach was no doubt influenced by early mentors such as Elizabeth Diller, who was one of the lead architects on the New York Highline project, the famous regeneration of an old New York elevated railway into a long greenway public park.

“That was a case study of preserving this incredible infrastructure of New York,” she adds. “Each city has its own differences and challenges, but there’s also a lot of shared experience to impart.”

It’s exactly what the city needs – and especially now. These vibrant little urban oases offer much hope, both real and symbolic, their whimsical character proving powerful anecdotes in a city living under pandemic restrictions.

“As a non-profit organisation, we like to experiment and pilot,” says Yiu, “Future wise, we’ll hopefully be developing a more expansive programme, but we still need to have a sense of precision … It’s great to have this momentum of generosity and collaboration.”