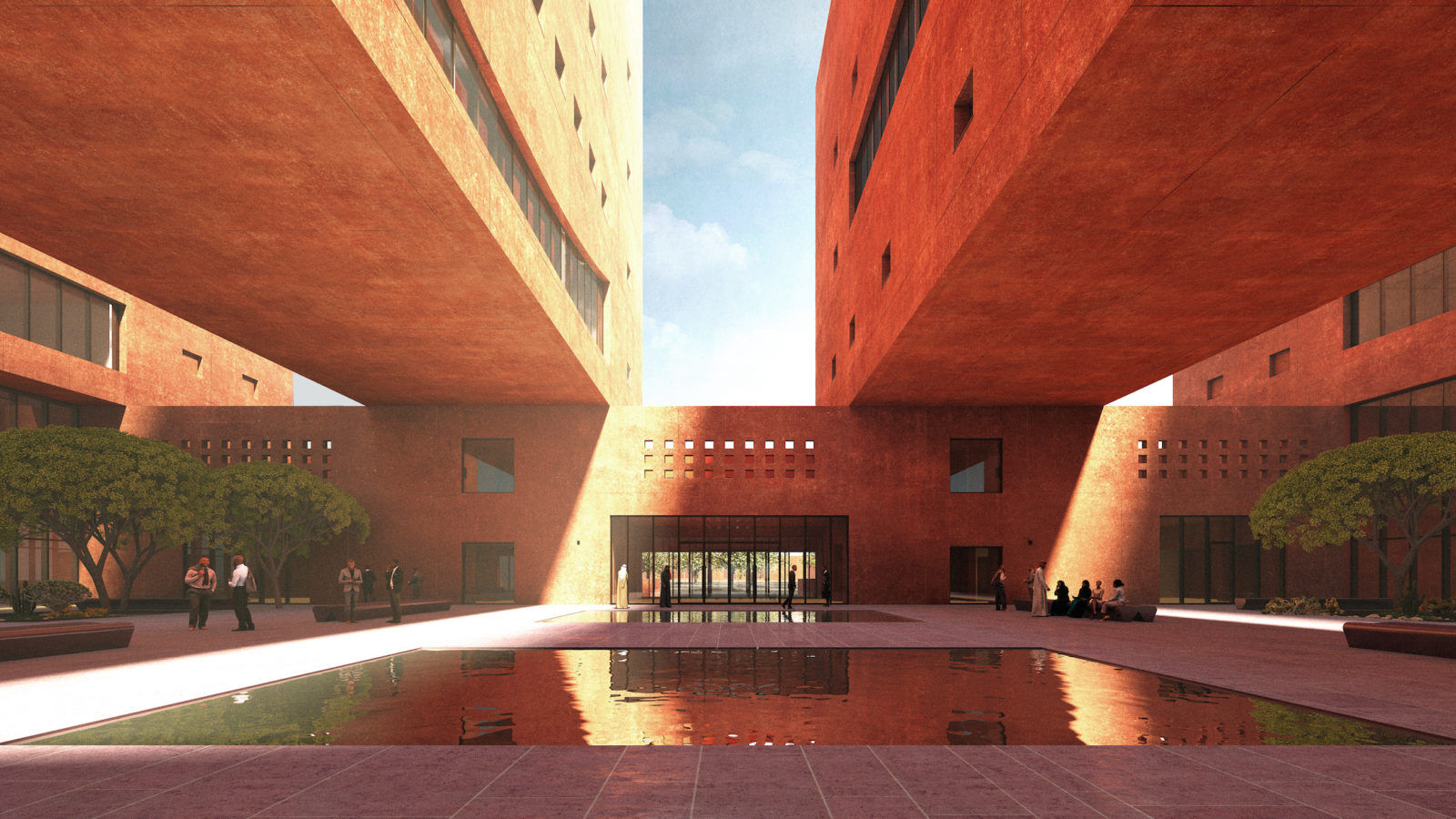 Sir David Adjaye’s star is ascendant and bright. The award-winning Ghanaian-British architect talks to us about climate, context, culture and community.

Unveiling his plans for the Africa Institute in Sharjah, UAE, last month, the lauded Ghanaian-British architect Sir David Adjaye has clearly been on a roll. Making his mark on places big and small around the globe, Adjaye could be a starchitect in the making.

There have been prolific collaborations with contemporary artists; he also designed the 56th Venice Biennale, last year he completed the luminous Webster flagship in Los Angeles; and in 2016, Washington DC’s Smithsonian National Museum of African American History and Culture. Projects such as Oslo’s Nobel Peace Centre, Ruby City in Texas (with its striking angular crimson facade) or the bunker-like Mole House in Hackney (an artist studio and home) show the fearless intellect and elegance that are signatures of Adjaye’s style.

“Wherever the project may be, my design process is always rooted in geography, culture and climate … I address the overarching agenda that’s applicable no matter where it’s sited,” Adjaye explains, “whether it’s the desert climate of Sharjah, the urban grit of downtown Manhattan or even the prairie fields of Iowa. In each of these unique scenarios, what I’m most driven by is establishing sustainable systems and ecologies that are structured by unique bodies of knowledge that help us understand and, in turn, take care of our collective planet – Earth.”

This approach breeds designs that have won him a whole host of awards, as well as a knighthood in 2017. This year, Adjaye was awarded the 2021 RIBA Royal Gold Medal. At the virtual ceremony, President Barack Obama (along with three African presidents) and Bono made speeches celebrating his work. Not to read too much into celebrity cachet, but when these two are fans you can safely say you’ve made it.

Born in Dar es Salaam, Tanzania to Ghanian parents. Adjaye grew up moving around Africa and the Middle East before the family settled in London, where he ended up studying architecture. His father was a diplomat; that accrued early-life worldliness shows well in his work at Adjaye Associates, which he established in 2000. Here, design is anchored in context and local community with a penchant for sustainable systems.

With the world more connected, yet divided, than ever, perhaps it takes the mental machinations of a truly global citizen like Adjaye to be so deft at weaving between cultures, heritages and locales. His architectural firm has bases in Accra, London and New York, and his aesthetic spans the continents. Unveiled visions for projects such as the Edo Museum of West African Art in Benin City and the Princeton University Art Museum prove that Adjaye’s bold monuments will be defining more of our vital spaces soon.

The Africa Institute design shows an imposing pale pink structure, rectangular tower blocks rising high towards the sky and interconnected at the base. The 32,000-square-metre campus will be a key centre for African and African diaspora studies in the Arab world, hosting classrooms, an auditorium, bookstore, performance spaces, gallery and restaurant. Each block is made from low-carbon concrete and creates shade for the courtyards below.

“The campus is woven together through a shared internal courtyard,” Adjaye explains. “By extending the courtyard typology and infusing the public realm, the design allows climate and construct to cohabitate … so the campus lends itself to an experience of living and learning, not only from the curriculum but from the region itself.”

Adjaye has struck gold with several institutions of learning and collecting, whether it’s the disc-like Moscow’s Skolkovo School of Management, the domes of his Thabo Mbeki Presidential Library in Johannesburg or the Studio Museum in Harlem. However, the Africa Institute is especially close to his heart, functioning “as a means of introducing a new type of pedagogy and centre for knowledge into the global academic sphere”. The impact on African culture and academia could be colossal if the site does what’s envisaged, acting “as a springboard that emerges lesser-known diasporas than that of the Atlantic slave trade and forges new connections between Africa, the African diaspora and the Arab world”.

Although Adjaye might be known for imposing large-scale buildings, his firm works on small-scale projects that have included audio speaker systems, fabrics and, now, incredibly rare whisky bottles. The exclusive Artistry in Oak for Gordan & McPhail, revealed last month, saw Adjaye creating “an experience-driven vessel whereby the act of opening Gordon & MacPhail whisky would become both ceremonial and sensorial”. This precious-jewel-like piece includes a hefty crystal decanter, glasses and a slatted oak casing holding the oldest single-malt whisky ever bottled, the Generations 80 Years Old from Glenlivet Distillery. The first bottle and casing will be auctioned by Sotheby’s Hong Kong in early October.

Inspired by the “history of craft, precision and innovation” that’s defined Gordon & MacPhail’s process for over a century, the design is a celebration of rare craftsmanship in a world dominated by mass production. The oak case nods to the casks used in whisky ageing, designed to blur the line “between the liquid and its container, evoking a more magical experience for the consumer”.

Contemporary design and architecture have become more humanistic and experiential of late. Whereas previously we paid more attention to the macro visual impact, today the lived micro nuances provide much food for thought.

Architecture at the top remains lacking in diversity. However, Adjaye reasons that change is afoot. “I was deeply honoured to receive the RIBA Gold Medal 2021 and, in many ways, saw this as a sign that things are shifting.

“Diversity within design and architecture means the act of decentralisation. Decentralising Western knowledge as the pivotal default and instead, looking to other pillars of knowledge from other cultures, such as African and indigenous stories,” he says.

This is a necessary step in the movement towards equality. There’s been much soul searching in architecture and design. We’re focusing more on the sustainability, social equality and health of places and spaces – and all with a new sense of aching awareness. A pandemic has only exacerbated and accelerated this. And it’s pushed professionals like Adjaye to explore and innovate. He’s even been experimenting with materials such as compressed mud that has carbon dioxide-soaking and air-purifying properties.

As a leading Black architect, Adjaye’s work also holds extra significance today, particularly with projects such as the bronze, latticed Smithsonian National Museum of African American History and Culture in Washington DC, exemplifying the power of buildings as cultural monuments. More than just a museum, this is an interactive site for even the very uncomfortable parts of American history.

“The opportunity to contribute to something with so much resonance was something I once only dreamed of. It was challenging, invigorating and 10 years in the making,” Adjaye says. “It really speaks to so many people on so many levels as well as to history, and the possibility of multiplicity within history. How there are various stories that exist within a narrative that not only inform it but can transform it, in the way that the 200-year-old story of America can be informed by a 400-year-old story of slavery.”

If the built environment is the material expression of “contextual knowledge systems”, Adjaye believes that a truly sensitive architect must understand that “architecture is a planetary art”. What then, from his personal point of view, does good design have to “do”?

“I’ve been asked this question many times, and what it really comes down to is that design must have integrity within the context of its own time,” he says. “Good design has to understand the primary geographies of the place and the ways in which human habitation has traditionally formed and how it could evolve. This is the type of thinking that leads to radically sustainable design, it brings about design that’s informed by a type of listening that’s specific to its people, its geography and its climate.”

With the social and public projects that Adjaye takes on (a Brooklyn East Flatbush regeneration proposal with 900 affordable housing units, for example) there’s the added pressure of creating spaces that are “socially edifying, unifying and liberating”, as well as beautiful. The role of design as a force for social good (and evil) is a well-pressed point, but after a year and a half of lockdowns, this spearheads the public consciousness. How do spaces serve the people? How can they facilitate and manipulate human interaction? What should a public space achieve?

It needs to be “a site of conversation and negotiation, where various energies and people from different walks of life meet”, Adjaye argues. Since it’s where we all “learn how to be with others as well as how to be in the world”, it has bold implications for shaping future society, envisaged by Adjaye as a “planetary community” – a concept at the heart of his work.

The featured and hero image is of the Africa Institute in Sharjah, UAE