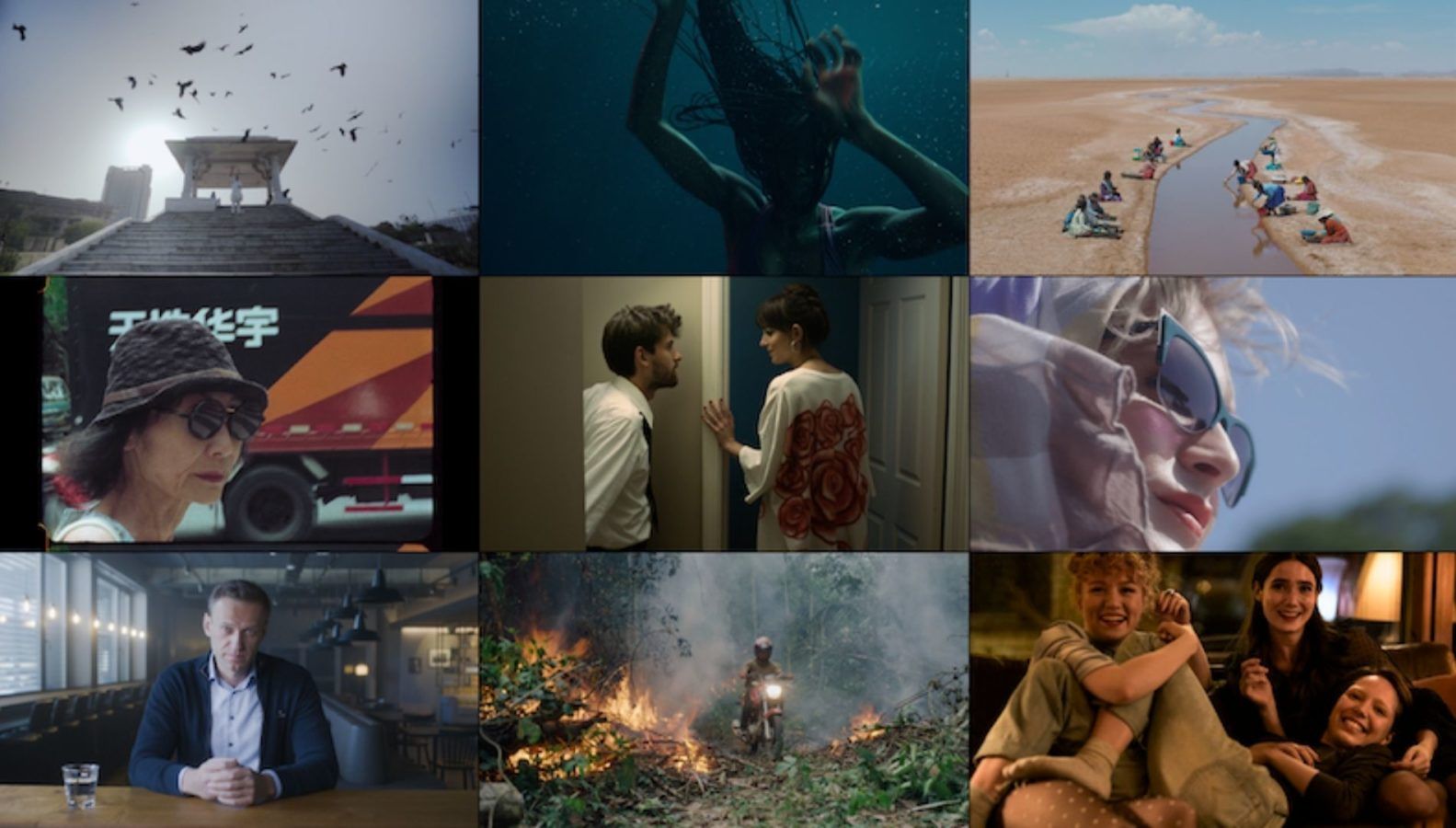 The 2022 Sundance Film Festival ditched its hilly location of Park City in Utah and went virtual for the second year because of the rise in COVID-19 cases in the country. The 10-day-long film festival ran from 20 — 30 January 2022.

While the festival was streamed via Sundance’s digital platform and Twitter across the USA, some segments could be viewed internationally. This year, there were 84 feature-length and 59 short films from 28 countries, most of which were world premieres that will be released at a later date.

Big budget deals, coveted accolades, honorary mentions, crowd favourites and jury awards — this year, the festival may have been low key with no physical audience or presenters, but it has scaled new heights.

The lineup has seen some great gems that bagged top awards and have set the bar for the Oscars quite high. The list of films, including Cha Cha Real Smooth, Nanny, Navalny, The Exiles and All That Breathes, brings out some of the best cinematic experiences for the viewers.

As the jury announced the winners on 28 January, the winning movies were streamed over the next two days and a segment was also shown across seven satellite screen locations in the US.

This year, the Sundance Film Festival saw an array of entries that were from varied backgrounds and brought something unique to the table.

Sundance Institute CEO Joana Vicente said, “Today’s awards represent the determination of visionary individuals, whose dynamic work will continue to change the culture and create discourse throughout the year.”

She added, “This year’s entire program has proven that no matter the context, independent storytelling remains a pivotal tool in expanding critical dialogues, and these stories will and must be shared.”

Debut director Nikyatu Jusu’s Nanny bagged the highest award in the US Dramatic category. The film depicts the journey of Aisha, essayed by Anna Diop, who is working for a privileged New York family. She is excited for her son’s arrival from Senegal, and together they can start anew to realise the American dream. At such a juncture, her dreams are haunted by some violent supernatural presence. What happens is left for the viewers to see when Nanny releases.

On the other hand, the documentary award in the same category goes to Ben Klein and Violet Columbus’ directorial The Exiles. It charts the life and journey of filmmaker Christine Choy.

She traces three dissidents of the infamous Tiananmen Square massacre in 1989. Interesting to note, Choy had abandoned the production midway but had returned to the clips and videos much later to make this brilliant documentary.

The 2022 Sundance Festival became a platform to introduce an array of indie world cinema that has swayed the audience and has captivated the jury’s attention. Like last year, when movies like Hive and Flee created a buzz in global cinema, this year two films bagged the highest accolades.

Winning the award for World Cinema Dramatic is director Alejandro Loayza Grisi’s Utama. The film creates a vivid setting of the Bolivian highlands where a Quechua couple has been living the same everyday life for years until a threatening drought hits their existence. Now, Virginio and his wife Sisa must decide whether to leave their Altiplano homeland.

Indian filmmaker Shaunak Sen’s documentary All That Breathes also won big in this category and grabbed eyeballs for being the only Indian film at the Sundance Film Festival. The film categorically upholds the adverse effects of Delhi’s growing air pollution and the toxicity it brings with itself. Amidst such a bleak background, two brothers are out to save a bird called Black Kite.

Cha Cha Real Smooth bagged the award in the dramatic category as well as made headlines for being the biggest sale in the festival. The IMDb summary reads, “A young man who works as a Bar Mitzvah party host strikes up a friendship with a mother and her autistic daughter.”

Twenty-three-year-old director Cooper Raiff cast himself opposite the stunning Dakota Johnson in the lead role. The film might make Raiff the new rom-com director to look out for.

Since his debut film Shithouse — a layered film set in a college dorm — Raiff has proven himself yet again with this upcoming movie which has a title inspired by a DJ Casper line dance.

Continuing the category, the documentary award was given to Navalny. Directed by Daniel Roher from CNN and HBO Max, the documentary is a fly-on-the-wall film that charts the life and journey of Russian Opposition leader Alexei Navalny who was recuperating from an attempt to assassinate him in Berlin.

Roher was given unlimited and close access to Navalny as well as footage and clips for the making of this politically sensitive film. However, Navalny is quite a late addition to the lineup, as it wasn’t announced by the Sundance Institute until 24 January.

In the dramatic category, director Alli Haapasalo’s Girl Picture won the award. The film from Finland explores the different aspects of a girl’s life and desires. It centres around three young girls — Mimmi, Emma and Rönkkö — who are transitioning into becoming women. They embark on some life-altering journeys as two fall in love while the third explores the realms of pleasure.

The award for World Cinema Documentary in this category was given to the Brazilian film The Territory. Director Alex Pritz dives deep into the Amazon rainforests where a network of Brazilian farmers takes up a portion of the virgin lands. A young indigenous leader takes it upon him to protect this forest land, as well as a primitive uncontacted community that resides there.

The 2022 Sundance Film Festival might have reduced the grandeur and show pomp, but the deals, acquisitions and sales tell a different story.

Apple shelled out a whopping USD 15 million for the worldwide rights of Cha Cha Real Smooth. The deal is one of the highest of the festival and is almost 1,000 times the budget of Cooper Raiff’s award-winning debut Shithouse.

Another jaw-dropping deal that must be mentioned is when Searchlight Pictures scooped the US rights of the Emma Thompson-starrer dramedy, Good Luck To You, Leo Grande, for USD 7.5 million. The light-hearted comedy directed by Sophie Hyde will be made available on Hulu. The date is, however, yet to be announced.

Global rights of Participant’s feature documentary Descendant, which also bagged the US Documentary Special Jury Award: Creative Vision, has been acquired by Netflix. To take it a notch higher, former US President Barack Obama and Michelle Obama’s production house will present the film along with Netflix.

Meanwhile, National Geographic bought the worldwide rights of Fire Of Love for a handsome mid-seven figure and went on to acquire the rights for The Territory. Its director Alex Pritz also bagged the Special Jury Award: Documentary Craft.

After winning over the US audience, Navalny also earned the Festival Favourite Award, which was selected by audience vote from a wide range of 84 features.

The 2022 Alfred P. Sloan Feature Film Prize was awarded to After Yang. The award recognises an outstanding film that pushes the boundaries in the sci-fi genre and ushers in a technological treat for the viewers. Director Kogonada also received a cash prize of USD 20,000 from the Sundance Institute with support from the Alfred P. Sloan Foundation.

Netflix’s upcoming three-part documentary on Kanye West (Ye), Jeeh-Yuhs, deserves special mention as the 22-Grammy Award winner enters this new zone. The film, screened at Sundance, is directed by Clarence “Coodie” Simmons and Chike Ozah and tells the story of the rise and success of the artist and several of his milestone events.