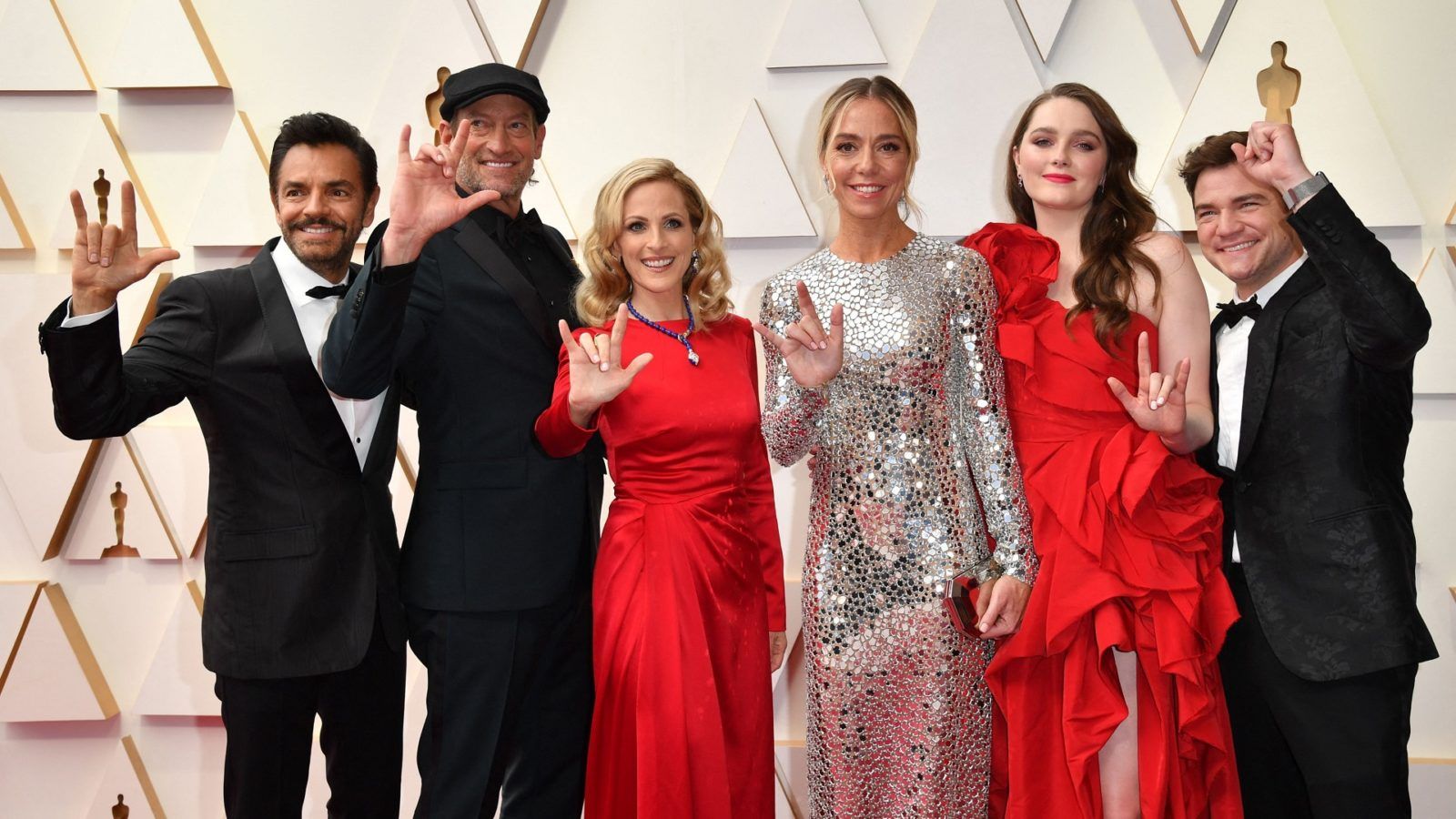 The 2022 Academy Awards were announced in a glittering ceremony at Dolby Theatre in Los Angeles, US, on 27 March. Dune was the mega winner of the night with six Oscars out of its 10 nominations.

Jane Campion won the award for Best Director for The Power of the Dog, becoming only the third woman after Kathryn Bigelow and Chloé Zhao to win in the category.

The Power of the Dog had secured 12 nominations at the 94th Academy Awards, making it one of the most nominated films in Oscar history. Though a favourite at the event, the film could not win any other award.

CODA won for Best Picture, while Troy Kotsur won the Oscar for Best Supporting Actor. He is the only second deaf actor after Marlee Matlin to win an Academy Award and the first deaf male actor to win the prestigious honour. Interestingly, Matlin, who won for her performance in the 1987 film Children of a Lesser God, is Kotsur’s co-star in CODA.

“I really want to thank all the wonderful deaf theatre stages where I was allowed and given the opportunity to develop my craft as an actor,” Kotsur said in his acceptance speech using sign language.

Meanwhile, Chastain, who won an Oscar for playing televangelist Tammy Faye Bakker in The Eyes of Tammy Faye, earlier bagged the Screen Actors Guild award for Outstanding Performance by a Female Actor in a Leading Role for the same role.

Ariana DeBose won the Best Actress in a Supporting Role for West Side Story. Like Smith, DeBose has won every major award in the category.

“Even in this weary world we live in, dreams do come true,” she said while receiving her Oscar.

Thanking Rita Moreno, who won the award for the same role in the 1961 original, DeBose said that the older actress led the way for “tons of Anitas like me.”

DeBose, the first queer woman of colour to win the Best Supporting Actress, garnered plaudits for her speech when she said, “To anybody who has ever questioned your identity or you find yourself living in the gray spaces, I promise you this: There is indeed a place for us.”

Japanese film Drive My Car won the award in the Best International Feature Film category. It is, thus, the second Japanese film after 2008’s Departures to win in this competitive section.

Based on a Haruki Murakami short story, the film had also been nominated in three other categories — Best Picture, Best Director (for Ryusuke Hamaguchi) and Best Adapted Screenplay (for Ryusuke Hamaguchi and Takamasa Oe). It is the first Japanese film to have received more than one Oscar nomination.

On the other hand, Encanto, the most talked-about animated film of 2021, won the award for Best Animated Feature Film.

Performances and other Oscars 2022 highlights

This year marked the return of the glitz and glamour to the Oscar red carpet. Stars turned up dressed in their finest, underlining some of the best of fashion seen on the awards circuit in 2022.

Hosting duties also made a comeback to the Academy Awards for the first time since 2018. And making things more memorable, it was the first time in history that the ceremony was hosted by three women — Regina Hall, Amy Schumer and Wanda Sykes, all of whom are renowned for their comic timing.

Schumer arrived on the red carpet in a midnight blue dress highlighted by a sequined ribbon trim.

Among the other stars, Lupita Nyong’o turned heads in her foily fringed gold-coloured gown, while Timothée Chalamet rocked the red-carpet look when he arrived in an unbuttoned starry black blazer that revealed his shirtless body.

Vanessa Hudgens, who interviewed nominees such as Andrew Garfield and Ariana DeBose, drew attention for her sequined black dress and emerald green accessories.

Then there were also some who highlighted the ongoing Russian invasion of Ukraine.

Megan Thee Stallion performed “We Don’t Talk About Bruno”, the acclaimed song from Encanto. Giving it a unique twist, she rapped and name-dropped some of the celebrities present at the ceremony, including Zendaya, who was dressed in a cropped white button-up with a silver train skirt.

Billie Eilish, who won the Academy Award for Best Original Song for “No Time To Die”, performed the James Bond film theme song at the ceremony.

An appearance by BTS was in store for Oscar attendees. The acclaimed K-pop boy spoke about their love for Disney and Pixar films in a pre-recorded video, which was aired during the ceremony.

Fans of Quentin Tarantino’s Pulp Fiction were in for a delight when its main cast, Uma Thurman, Samuel L. Jackson and John Travolta, took to the stage together to celebrate the 28th anniversary of the iconic film and present the Best Actor award.

One of the biggest reunions at the 94th Academy Awards was when Al Pacino, Robert De Niro, and Francis Ford Coppola took the stage to celebrate the 50th anniversary of The Godfather (1972). The three received a standing ovation from the attendees.

Coppola addressed the gathering and thanked the two leading actors, flanking him besides Mario Puzo, the author of the original Godfather novel, and the film’s producer Robert Evans.

He ended with the words “viva Ukraine”, which were echoed by Pacino and De Niro.

What became the most talked-about moment among Oscars 2022 highlights was when Will Smith went up on the stage and took a swing at Chris Rock for making a joke on his wife, Jada Pinkett-Smith, who is suffering from a medical condition.

Smith returned to his place and was then reportedly heard shouting, “Keep my wife’s name out of your f***ing mouth.”

When Rock tried to explain that it was a joke, Smith again repeated himself. A serious-faced Rock was then heard saying, “That was a [sic] greatest night in the history of television.”

Besides Kotsur and DeBose, several prominent names were among those nominated for the first time.

Kristen Stewart got her first-ever Oscar nod (in the Best Actress category) for playing the role of Princess Diana in Spencer.

The Power of the Dog gave Kodi Smit-McPhee, Jesse Plemons and Kirsten Dunst their first-ever Oscar nominations — all of whom were recognised for their respective supporting roles.

The Best Supporting Actress category also had first-timers like Aunjanue Ellis, who was nominated for King Richard, and Jessie Buckley, for her performance in The Lost Daughter.

Veteran actor Ciarán Hinds, too, had his first Academy Award nod for a supporting role in Belfast.

Jane Campion — The Power of the Dog

Actor in a Leading Role

Javier Bardem — Being the Ricardos

Benedict Cumberbatch — The Power of the Dog

Denzel Washington — The Tragedy of Macbeth

Actress in a Leading Role

Nicole Kidman – Being the Ricardos

Actor in a Supporting Role

JK Simmons — Being The Ricardos

Kodi Smit-McPhee — The Power of the Dog

Jesse Plemons — The Power of the Dog

Actress in a Supporting Role

Kirsten Dunst — The Power of the Dog

The Power of the Dog — Jane Campion

The Worst Person In The World — Eskil Vogt, Joachim Trier

Lunana: A Yak In The Classroom (Bhutan)

The Worst Person in the World (Norway)

The Hand of God (Italy)

The Mitchells Vs The Machines

Raya and The Last Dragon

Summer of Soul (…Or, When The Revolution Could Not Be Televised)

When We Were Bullies

The Queen of Basketball

Affairs of the Art

Ala Kachuu – Take and Run

The Power of the Dog — Jonny Greenwood

“Down to Joy” (Belfast) — Van Morrison

The Power of the Dog — Peter Sciberras

The Tragedy of Macbeth — Bruno Delbonnel

The Power of the Dog — Ari Wegner

The Power of the Dog — Grant Major, Amber Richards