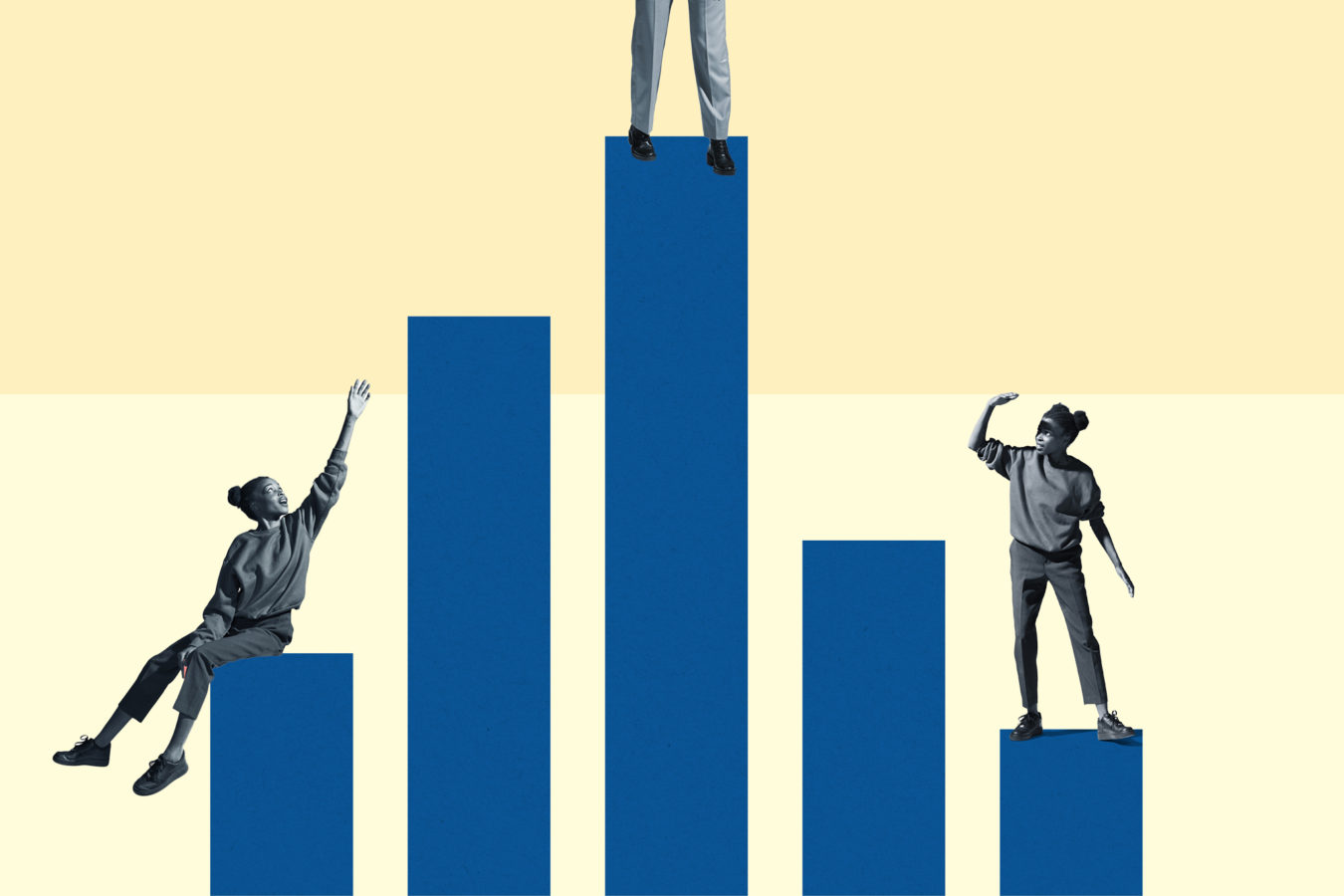 Equity vs. Equality: What’s the Difference? Here’s How Experts Explain It

Pursuits
Equity vs. Equality: What’s the Difference? Here’s How Experts Explain It
Share
Next article

Equity and equality. You’ve heard both terms. You know they have something to do with fairness. Your workplace might have talks about “diversity, equity, and inclusion.” You might have heard about the concept of health equity. But what exactly do they mean, and how are they different? Here’s how experts explain equity vs. equality and how to achieve them.

First, here’s a basic overview of both equity and equality. Alford Young, PhD, professor of sociology and Afroamerican studies at the University of Michigan, tells Health that he defines them this way:

* Equality is the access to and distribution of a set of resources evenly across individuals of a population.

* Equity is the access to or distribution of resources according to need.

This equality vs. equity cartoon gives a visual representation of these definitions:

In the equality drawing, each person is given the same box – the access to and distribution of resources evenly across the population. By providing equality, the shortest person still can’t see over the fence; the tallest person has been boosted even higher over the fence he already could see over. In the equity drawing, the people are given either one, two, or no boxes to stand on – the access to or distribution of resources according to need. By providing equity, all three can now see over the fence at the same level, regardless of their height.

Young says that equality and equity shouldn’t be considered synonyms. While both have to do with fairness and justice, how they are achieved and what they ultimately look like are different. “People often use the terms interchangeably, and they shouldn’t be,” he says.

Why the focus is on equity now

Equality assumes that everybody is the same and everybody needs the same thing. But some people need more because they started with less. If everyone gets an equal shot or piece of something (say, a company issuing every employee a tablet to use for work at home), some people still don’t have what they need (like reliable home Wi-Fi to use the device), and they won’t be able to thrive, Regina Davis Moss, PhD, MPH, the American Public Health Association’s associate executive director, tells Health. Because equality still leaves room for different outcomes, she says equality shouldn’t be the goal.

“I think what’s driving the focus on equity is this now long-standing realisation that there are such differences in certain social outcomes that require different means of address, or that the different populations need different things,” Young says. An equitable approach to the tablet example would be figuring out which employees need Wi-Fi access and giving them not just the tablet, but also a way to access Wi-Fi. This way, all employees have the necessary resources to do their work.

Without first achieving equity, you can’t achieve equality, Young says. “Equity… becomes a way of focusing on the fact that we’re not going to have equality any time soon by just throwing a set of resources to a bunch of people at the same level­-that’s not going to do much,” he explains.

So is “equality” an outdated term? No, Davis Moss says. Equality works – that is, if everyone needs the same thing. “In some places yes, absolutely, you should be trying to think about [equality], but when we’re talking about really trying to help people have better lives and rectify [unfairness], then that’s just not going to be enough if you give everyone the same thing,” she explains.

What does equity look like in the real world?

Equity is both an ultimate goal and a process, according to Davis Moss. In terms of the ultimate goal, she says that achieving equity means that no part of a person’s identity (like race, gender, ethnicity, socioeconomic status, sexual orientation, and religion) gets in the way of their ability to thrive. In terms of the process, being equitable means recognising, taking accountability for, and changing the systemic and structural barriers that get in the way of people being able to thrive. And the people who were affected by inequality should be meaningfully involved in the change process, she says.

Some might think that these targeted efforts in and of themselves are racist and discriminatory, Young points out. He disagrees. “If a sect of people have suffered neglect or abuse, lack of access, the only way to correct that is by special intervention,” he says.

The focus on health equity

The call for greater equity spans everything from education to work to politics. But the systemic and structural barriers that prevent people from thriving in each of these spheres can, in turn, prevent people being the healthiest they can be, according to Davis Moss.

For example, inequity in education might have prevented you from going to college. That might make it hard for you to find a job that offers health insurance, or even a good-paying job. “If you live in a low-income neighbourhood because that’s all that you can afford, you may live in an area with poor housing that has an impact on your health – whether that be lead exposure, whether that be densely populated and you’re on top of each other, and you saw that happening with COVID, that people were exposed,” Davis Moss explains.

The pandemic has especially highlighted the need for health equity, hitting minority and low-income communities hardest. “The last 14 months have been one of the most salient moments to recognise how different people need some very different things even though they share being affected by the same health crisis,” Young says.

But COVID-19 is just one condition that disproportionately affects certain populations. Those in the LGBTQ+ community have higher rates of mental health conditions. Asian/Pacific Islander women are more likely to have stomach cancer. Davis Moss uses the example that Black Americans have higher rates of diabetes. Health equity challenges us to get to that “why” behind those disparities, she says. Maybe there’s not enough healthful food or not as much access to care in a particular neighbourhood. Maybe it’s harder to find transportation or take off from work to go to a doctor’s appointment. All of these factors can make managing a chronic disease like diabetes harder.

What populations would benefit from equity?

Of course, equitable practices would help the specific groups and people that those practices are targeting. But having more equity will benefit society as a whole – even if you aren’t the direct target of those equitable practices. That’s especially true when it comes to health equity. “When we’re unhealthy, it has an impact on the goods that we produce, it has an effect on how competitive we are as a nation, it has an impact on who’s going to be in our workforce, who’s going to be taking care of us as we age,” says Davis Moss. “So we can’t afford to have some population sicker than others.”

“There’s a lot of learning that people need to undergo to understand how the life situation of others affects you,” Young says. Our dependence on technology, instead of face-to-face interaction, also makes us forget or not realise “how interconnected we are and how much we need other people’s well-being for us to have well-being,” he adds.

How will we know when we’ve achieved equity?

Education, politics, and entertainment are some of the areas where Young says notable equitable progress has been made. Yes, there is still work to be done, “but that doesn’t dismiss the critical changes that have happened over time,” he says. Instead of criticising what is not “wholly perfect,” Young suggests recognising that change has happened and build upon it.

Economics is one area where equity is especially needed right now, Davis Moss says, especially as it relates to health. “The need for someone to earn a living wage is going to have a tremendous impact on health,” she explains. To help make health itself more equitable, the US Department of Health and Human Services has identified 355 objectives that it will target over the next decade, including increasing the number of national surveys that collect data on lesbian, gay, and bisexual populations; reducing the proportion of adults with disabilities who delay preventive care because of cost and increasing the proportion of people whose water supply is safe to drink.

So regardless of whether it’s health equity or any other type of equity, how will we know when equity has been reached? “When people who are affected by the same conditions and circumstances generally have the same outcome,” Young says. “At its core, if the same kind of thing happens to you as happens to someone else, you have an equal opportunity to endure, survive it, manage it, challenge it as do other people.”

What you can do to help bridge the equity gap

Equity is dictated by policy at every level, Davis Moss says. So it isn’t just federal policy, but also state policy and policies in organisations, such as when you’re picking members of a board. “If your board is not representative to everyone, there’s not a voice at the table to make sure that those views are heard,” Davis Moss explains.

But there are still things you can do to help promote equity, even on a more personal level. “Think in modest and some basic ways,” Young says. “I think too often the commitment to change comes about by people trying to figure out, ‘How do I change an entire community or an entire environment?,'” he explains. Instead, take stock of these five areas: where you live, where you work, where you worship, where you go for recreation, and where you go to school, if you’re still in school.

“Think about who’s unfairly disadvantaged or who’s suffering in those domains and what service might you bring to those people,” Young says. “Can you partner with them and be a friend, be an ally to help them feel better included, to make them better aware of opportunities and resources? Do you have the material capacity to create change in those spaces by funding programs and initiatives and support services that make things go better for people? Or can you, because of your status, become a leader in those domains that initiates change?”

Any degree of help toward equity matters, Young say, whether you only have the means to be a friend, confidant, or supporter or you have the economic or material means to be able to contribute to change in more substantive ways.

Davis Moss recommends keeping this in mind: “We can never have too much awareness-raising. Because we assume what we know, everyone else already understands, but they don’t. So it starts with that conversation, but it also continues with meaningfully talking to the people that are impacted by [inequities] because ultimately they’re the own experts of their experience.”

Sign up to get the latest luxury and lifestyle news delivered to your inbox.
Colleen Murphy
Social issues