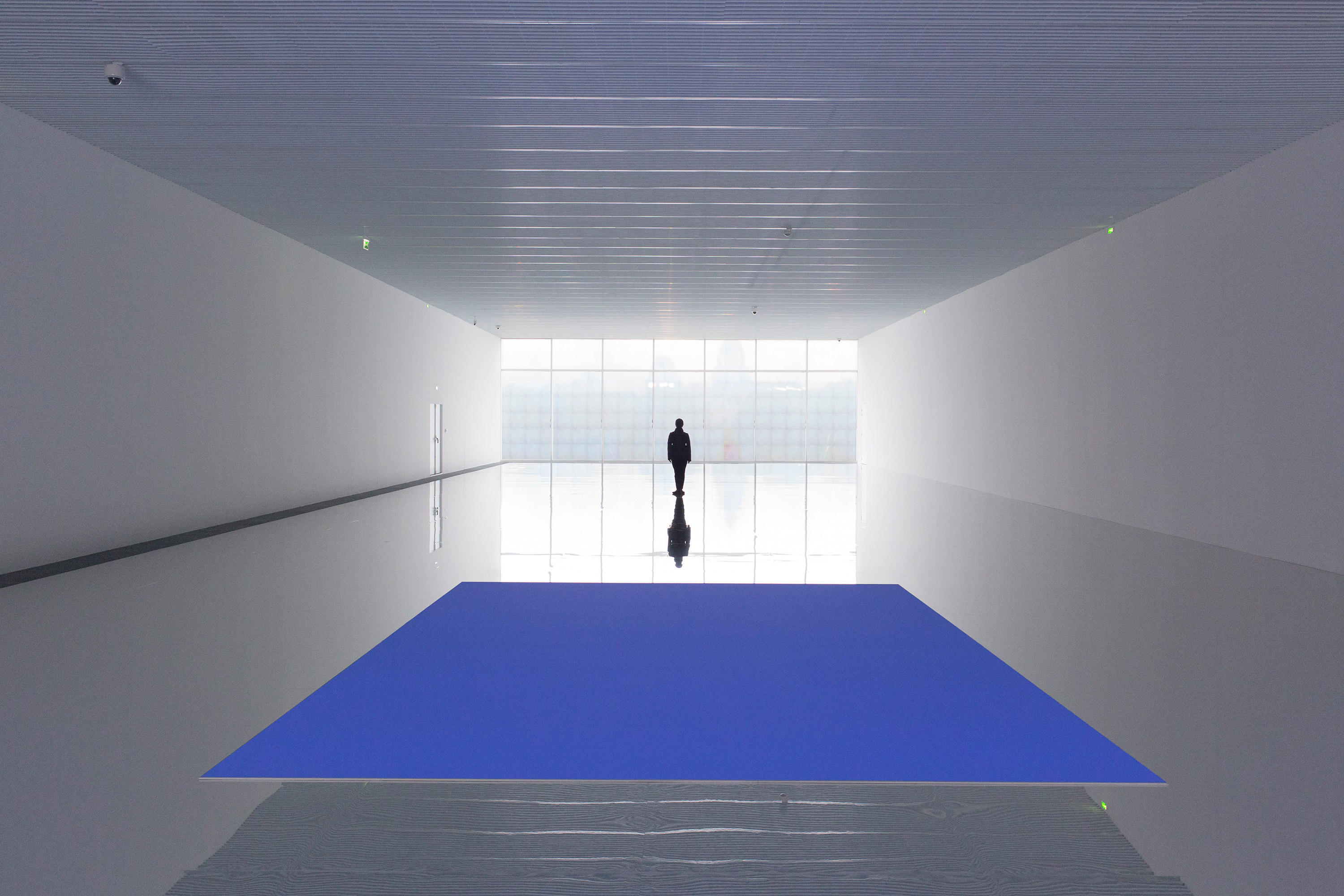 How Kimsooja Weaves Tradition and Art

Pursuits
How Kimsooja Weaves Tradition and Art
Share
Next article

Kimsooja works freely between various art disciplines, straddling analogue and digital, participatory and performance, poetry and anthropology, but to call her a multimedia artist seems a bit reductionist. Common threads run throughout the work – thread, indeed, being the operative word, because much of Kimsooja’s work is connected to and originates from sewing and bottari, a Korean cloth that’s traditionally used for wrapping bundles.

Her artistic practice began in earnest in 1983, while she was in her mid-20s and working mainly in paint. She was making bed sheets with her mother when the need to create, and the methodology with which to do it, came to her in an instant.

“I was about to push the needle in the Korean textile,” she says, “and I had a shocking moment, as if the whole universe was coming through my body and reaching the middle point. That was the moment I discovered, this is it. This is the methodology I could use to convey my ideas of the structure of the world. This was also a healing process at the same time that could question life and art – the whole idea of the self and the canvas connecting. That was the moment I started sewing using old bed covers from my family.”

To understand the significance of bottari in Kimsooja’s work, one needs to comprehend the fabric’s role in Korean society, where women learn needlework as a part of their early education. It’s part of everyday life, and is tied to themes of femininity and necessity, but also linked to ideas of rest and burial, protection and decoration. The colours of bottari often offer symbolic meaning, while the cloth in its entirety can act as a metaphor for Korean tradition.

Many of her early pieces are predominantly tactile in nature, vivid and free-form, using ready-made cloth co-opted for her purpose. Driven as she was by the textiles and the sewing process – admittedly very orthodox ideas – Kimsooja had also, early in her career, been romanced by producing art of a conceptual nature. “The methodology expanded into a wrapping series,” she explains. “Sewing is in a way wrapping, because you wrap the thread around the fabric. I think everything evolved into different dimensionality in a natural way.”

Two-dimensional fabric mosaics become three-dimensional wrapped items: the Deductive Objects series, invoking nostalgia for everyday tools by wrapping them in old Korean fabrics. By the mid-1990s, Kimsooja found herself investigating new forms of wrapping. A Needle Woman, her most visible work to date, was released in 1999, a multi-channel video that shows the artist standing completely still in various countries and locales, her stoic and inert figure an antithesis to the chaos around her, a metaphoric needle passing through places and time.

“I discovered that when I first recorded my daily life activities – collecting clothes, drying them on rails, making bundles – when I reviewed the video I realised that it has unseen processes not shown in the pieces,” says Kimsooja. “The pieces have traces of needling or stitches, but don’t have the performative element any more … I realised that my walking body is a symbol of a needle that weaves the big fabric of nature. At the same time I found that the video screen, or looking at the camera lens, is like wrapping reality and nature – in a way, I developed a material way of wrapping by using media.”

Since that revelation, Kimsooja has consciously recorded every work on video. As she always has, she creates first, and thinks later.

“Whenever I start a new work,” she says, “I never think or calculate. I never have a plot or logical perspective, but the urge to do it and intuitive action. After doing this, I look back and discover the logic in it. That contextualises my concepts and practices.”

It was this intuitive urge that woke her in the middle of the night, while she was considering the development of her website and pondering a relevant domain name, urging the removal of the spaces between her names. In that moment, Kim Soo Ja became Kimsooja, an entity without cultural or gender preconceptions.

“The idea woke me up. In fact, there are no gender identities or marital status or religions in the email format. It’s one word always in this form of communication around the world, so that was really striking. That was when I realised I can put my name as the website.”

On the website, she describes her one-word name as “an anarchist’s name”, but by no means does she consider herself political. To Kimsooja, anarchy is another term for freedom. Indeed, though the artist declines to ascribe specific messages to her works, she does concede that there are themes consistent within her pieces relating to identity and culture. But even the formalistic aspect of her work is open-ended: A Needle Woman may be classified as a video work, but it is also a record of a performance piece, despite the fact that the artist’s performance is executed, literally, by not performing. Her frequent use of ready-made objects, while seemingly restrictive, is almost an act of defiance, a forced reinterpretation of fixed definitions.

“I really tried all my career to just work with existing materials and existing formats or ways of doing as it is,” she says. “Most of my work has a simple structure. Maybe something that you have seen somewhere else, but it has its own meaning. I recreate the context of our daily life in relationship to the contemporary-art context.”

Of late, she has been exploring ideas of her own creation: spare, geometric installations that employ colours and light to engage. Large in scale and occasionally participatory in nature, these pieces include a giant striped stone set on a mirrored surface that held court at one of the entrances to the Art Basel fair in Hong Kong earlier this year, its size, primary colours and simple lines making it a darling for social-media photographs.

This ritualistic action, that’s becoming more and more de rigueur for art grazers at public fairs and biennales, seems apt given the artist’s own propensity to be enthralled by ritual and routine. For the Venice Biennale in 2013, her piece representing South Korea was one of the most visited, thanks to its brilliant visual appeal and interactive quality. To Breathe: Bottari was a site-specific installation that transformed the entire pavilion into a palace of light and rainbows with artful use of mirrors, and nothing else. The pavilion itself acted as the bottari bundle, while the reflections and refractions “wrapped” viewers, so to speak. A sensory deprivation chamber acted as a separate entity within the structure, wrapping visitors in a void.

An understanding of Kimsooja’s work is not a prerequisite for consumption, which lends a surprisingly commercial appeal to the pieces, if we can say that without critical stigma. “My pieces normally are very approachable for people,” Kimsooja reflects. “People from kids to adults who don’t have much knowledge about art, they easily approach my pieces. I hope it’s a positive step towards going deeper. Eventually, maybe with duration and experience of my work, people can understand my context better.”

For her Art Basel piece, Deductive Object, an addition to the original series, she was inspired by the Brahmanda stone, known colloquially as a “cosmic egg”. “It’s a black stone people polish until it becomes a mirror, they say. I immediately related it to my bottari pieces. I was painting the colour band around it and I discovered, in a way, I came back to the practice of painting through wrapping bottaris … I feel that my practice has circled and come back to the original point. Painting is now functioning as wrapping, in this sculpture. It also represents the different directionality, characters and formation of the shape as a totality. At the same time the totality has a duality by being reflected in the mirror, so it creates another direction, a figure in the centre, almost as if I’m standing there, as a ‘needle woman’.

“I must confess that all my works, ideas, and inspirations come from my own reality. The bottari and sewing pieces are from daily life experiences with my mother. I believe art and life cannot be separated, so I’m deeply engaged in here and now and where I am. Cultural background is definitely one of my passions; now I am also expanding into different cultures, geographies.”

Is there a paradox in her exploration of cultural identities, even as she herself rejects definition by gender, nationality or any other category? “You cannot hide your background and identity,” she says in measured tones. “So I still keep my identity as a Korean artist because my judgment and reaction might have come from there, because I lived for at least 40 years in Korea, and it was the most important time of my life, I wouldn’t deny that. At the same time, I don’t want to limit myself – I am interested in all identities and all places as I try to reach totality.”