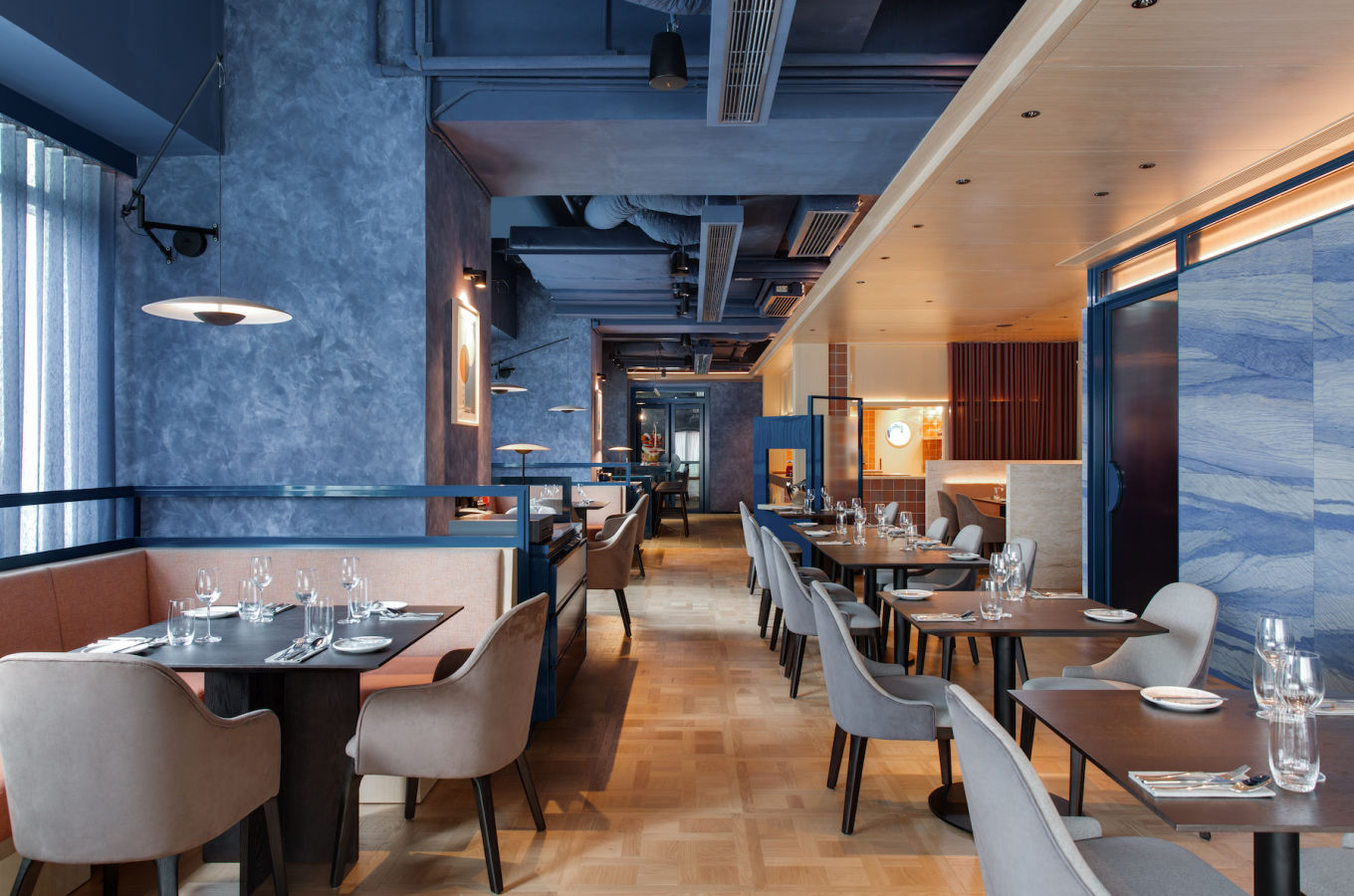 Attempting to satisfy our aesthetic appetite, we turn to three designers to reveal the most delicious restaurant trends

In Tom Ford’s 2016 film Nocturnal Animals, Amy Adams as Susan Morrow suffers the bitter aftermath of heartbreak when her former-husband Edward Sheffield, brought to the screen by Jake Gyllenhaal, stands her up at dinner in an unnamed restaurant. As the camera pans out to reveal Morrow zoning out in sadness, in the best traditions of highbrow cinema, it shows a magnificent green Japanese watercolour panel framed with dark wood. It belongs to a restaurant inside Yamashiro palace in North Hollywood.

Spaces tell stories as much as clothes or books do. F. Scott Fitzgerald’s delicious descriptions of the Buchanans’ interiors in The Great Gatsby painted the perfect picture of its wealthy residents. “A breeze blew through the room, blew curtains in at one end and out the other like pale flags, twisting them up toward the frosted wedding cake of the ceiling and then rippled over the wine-coloured rug, making a shadow on it as wind does on the sea.”

The curtains flying into the Buchanans’ drawing room was the image that came to mind when James JJ Acuña, creative director at the JJ Acuna / Bespoke Studio interior design and architectural practice mentioned Le Coucou in New York. “Everything about Le Coucou is very domestic. It feels like home,” he says. “We try to make our spaces an extension of the home.” Not to mention Le Coucou being favoured by the Great Gatsby of our generation, the fantasist- socialite Anna Delvey.

When it comes to interior design trends, Acuña is seeing two nearly polar aesthetic movements gain traction among his clients. First up is whatever helps restaurateurs and their customers quench the evolutionary thirst for unity with nature – on some level, at least. “There’s a trend of natural materials,” he explains. “We’ve always had timber, but I think people are more into terracotta, clay, concrete rough textures, like marble and stone, done with a lot of grain. People want something more earnest and authentic, even if it’s a luxury space. Acuña then notes panoramic hand-painted wallpaper depicting ancient sceneries and pottery as ubiquitous decor elements; a variation of such interior-design direction is evident in the newly opened German fine-dining restaurant Heimat, which Acuña and his team designed for The Ritz Carlton Hong Kong’s former executive chef Peter Find. Its inspirations stretch far and wide: the parquet floors reflect the traditional Schleswig-Holstein hausbarn, with its concept of the family living upstairs and the farm animals downstairs. Marble, timber and tile are all comfortably accommodated in one space, along with panoramic panels, though here they’re abstract rather than the scenic wallpaper referred to by the designer.

And then there’s a trend for what this writer – unshackled by a lack of architectural education – describes as “sanitised beauty”. “There’s a lot of contemporary art gallery- and modern museum-esque interiors with clean surfaces, white walls, concrete and glass in different colours,” says Acuña, an aesthetic choice that excusably can be mistaken for minimalism, but that Acuña believes has relinquished its throne to better-informed interiors with references that span centuries yet exhibit a modern flair. “A lot of our clients travel the world. They see architecture from all different eras and they want that perspective in their space,” he says. “Modern to me is taking those references from around the world and lightening it up a bit, giving it some levity, either using colour or material, or changing the profile of the detail a bit.”

One example of such an approach is the Korean fine-dining destination Hansik Goo, which JJ Acuna/Bespoke Studio designed for the award-winning chef Mingoo Kang. The private room’s vertical surfaces are influenced by 14th-century Bukchon Hanok villages in Korea, while sliced white limestone and poured in-situ terrazzo constitute unique floor patterns evoking the concrete walls that protect the Hanok homes (the floors are reminiscent of surfaces common to Soviet- era cultural institutions and universities, executed in postmodern fashion). “It captures the essence of Seoul without it being a traditional Korean house aesthetic. Hansik Goo is unlike any Korean restaurant you can think of in Hong Kong,” Acuña explains. “We decided to be more poetic and ambient about it rather than [it being the] Disneyfication of Korea.”

Terrazzo is another element that seems ubiquitous in restaurant design, as I’m told by Kevin Lim, chef and founding partner of the award-winning interdisciplinary design studio, OPENUU, which he runs with his wife Caroline Chou. “Terrazzo is everywhere. Growing up, we’re used to seeing it in Hong Kong. A lot of the stairways are made with it,” he says. Lim also laughingly recalls spotting terrazzo in the various lists of “interior design trends not to follow”.

To some, however, minimalism still remains at the forefront of interior design trends. According to Yuki Yasukagawa, creative director of Design East International, “There’s a trend of minimalistic, not overly decorated [interiors], using materials that speak for themselves, like stainless steel and clashing that with concrete and semi-transparent glass.” Some of Design East’s projects that submit to the trend are Yakiniku Ichiro in Jordan and Wan Chai’s Tenzushi.

Not unlike JJ Acuna/Bespoke Studio, however, Design East is also embracing an eclectic approach to design. Yasukagawa explains that its latest project, the soon-to-open American-Italian restaurant Oro on Stanley Street, combines a “fine balance of the old and new, using old materials, retouching them and rethinking how they look”. One of Oro’s most remarkable elements is the staircase, which “connects the 30th and 31st floor, and it’s small. I made it fully mirrored to expand the space and make it a completely neutral zone. I absolutely love the effect of walking through a space with so many different angles and reflections,” she says.

As far as furniture is concerned, Yasukagawa points to Kelly Wearstler’s creations as a source of inspiration. “She taps into jewellery design with her furniture,” she says. “Everything is heavily packed – it’s very different from Japanese minimalist design philosophies.”

It’s hard to analyse interior- design trends without pointing out all the various breeds of Instagrammable Spots. Says Acuña, “People are getting rid of the concept of Instagrammable spaces,” which he describes as “overly saccharine – they look good at first, and then you take a photo of it. After you leave, you realise you don’t want to go back there.” His way of tackling requests for such spaces lies within a holistic approach to design. “It’s the designer’s job to pull [the client] back and ask, ‘After [the customers] take photographs, what are they going to be offered? How has this become part of their day-to-day life?’ How many pink interiors or brass lighting finishes and round selfie mirrors can one really have?”, he asks with a laugh.

On the other hand, the trend still seems to have dedicated followers, including Lim. “There tends to be one corner where people line up and take photos. I’ve noticed that, in some restaurants, the lighting has been useful in illuminating the food,” he tells me. Yet he also supports the notion of holistic design.

“We try to make it happen organically,” he says. “We always try to make the whole space Instagrammable, so no matter where you’re sitting it gives everybody a fair opportunity,” and adds a point about comfort. “As Instagrammable as [certain spaces might be], they may not necessarily consider comfort too much until after the fact.”

Whatever the new or well- forgotten interior design trends might be, it seems as if thought- through designs with rich references are the way to go. Because, as in any good literary fiction, character is what drives the story.