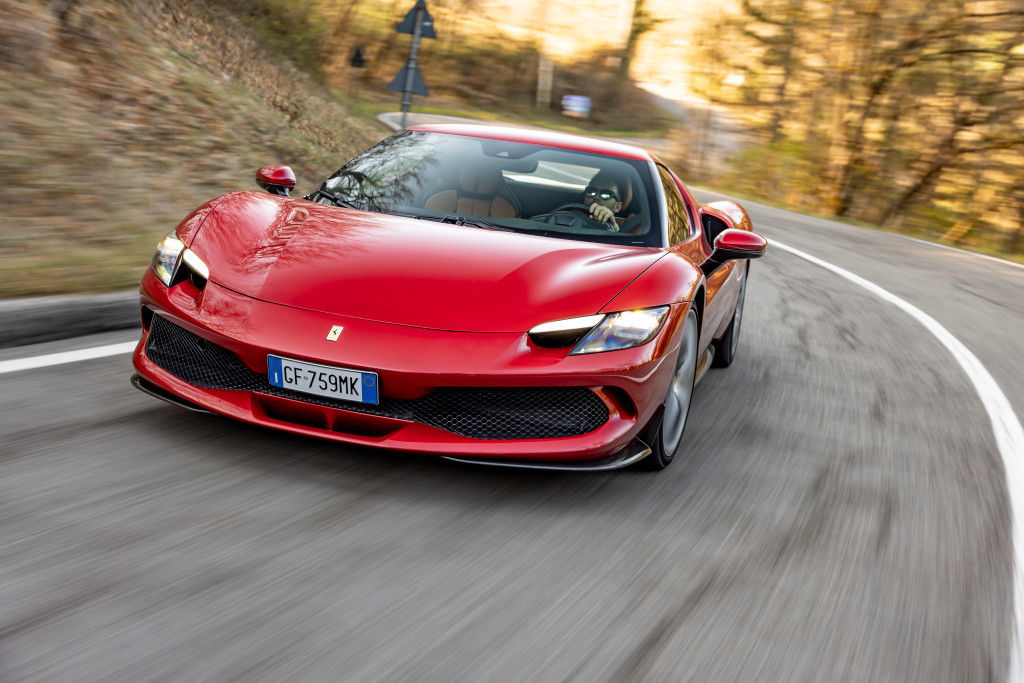 In the 75 years since its cars first rolled out of the factory in Maranello, Ferrari has pushed the envelope relentlessly. The latest hybrid-powered 296 GTB is a case in point – and one of its greatest ever.

Stretching the length of the ancient Via Aemilia trunk road, from Piacenza in the northwest to the resort town of Rimini on the Adriatic coast, the Italian region of Emilia-Romagna is one of the most fortunate in a country widely held to be the embodiment of la dolce vita. This blessed area is the home of glorious old cities such as Parma, Modena, Bologna, Imola and Forli, and the heartland of gastronomic traditions that brought us balsamic vinegar, the finest prosciutto, Parmigiana Reggiano cheese and fizzy lambrusco wine, not to mention the likes of Modenese chef Massimo Bottura, whose Osteria Francescana has twice been voted the world’s best restaurant. It’s a hotbed of learning, the arts and culture: the universities of Bologna and Modena were founded in 1088 and 1175 respectively; Verdi, Toscanini and Pavarotti were born here, as were the filmmakers Antonioni, Bertolucci, Fellini and Pasolini.

Such notable accomplishments would surely be sufficient for any corner of the planet, but over-achieving Emilia-Romagna can claim another distinction: it’s the location of Italy’s “motor valley”, an area extending roughly from Parma to Imola on that same arrow-straight Roman highway, which has developed into an extraordinary aggregation of automotive expertise. Along this 150km axis, Maserati, Lamborghini and Pagani, the motorcycle manufacturer Ducati, the racing-car builder Dallara and – undisputedly the greatest – Ferrari all set up shop, the latter’s small factory in the Modenese village of Maranello mushrooming and eventually exploding in size to become a vast hub of high-tech excellence and ingenuity, one that today is responsible for what are almost certainly the most exciting and dynamically accomplished automobiles produced anywhere on Earth (not to forget building the cars that have won more Formula 1 races than any other constructor’s since 1950 – and by a considerable margin).

Passionate, driven, uncompromising and a former racer himself, Enzo Ferrari began building road cars as a way of subsidising his motorsport activities, so his early automobiles of the 1940s and ’50s were often little more than de-tuned track machines. Into their bonnets he invariably shoehorned a V12 engine, an early example being the tiny 1.5-litre unit of the 125 S, with cylinders no bigger than minuscule wine glasses. Fewer pistons than that and, well, it couldn’t be regarded the pukka item. The tradition persisted until the 1970s, when the first of several fuel crises provoked the realisation that change would have to come, and gradually 12 cylinders began to be replaced by eight in all but Ferrari’s most exclusive and expensive sports cars.

Yet that wasn’t the whole story, because Ferrari not only produced a series of four-cylinder racing engines in the early 1950s, but by the middle of that decade Enzo Ferrari’s son Alfredo – “Dino” – was also working on the design of a V6 for track use, whose architecture later formed the basis of both six- and eight-cylinder motors. Dino, who suffered from Duchenne muscular dystrophy, sadly died before the engine had been completed, but a decade or so later a 2-litre version of the V6 appeared in the 206 GT road car, which was named in his honour but carried no Prancing Horse badges on its bodywork. In V6 form, the Dino 206/246 GT was produced between 1967 and 1974, when it was replaced by the 308, which also marked the beginning of a family of V8 road cars that continues in the form of today’s
F8 Tributo and SF90 Stradale, as well as the Roma and Portofino M.

Times are changing fast, though, and in the current stampede towards efficiency, downsizing and hybridisation, not even a brand as proud as Ferrari can deny its own nomenclature to cars lacking the requisite number of pots in their engine. Thus, with the arrival of the latest 296 GTB, we now have the first V6 road machine to officially bear the Ferrari name.

If you were inclined to think of the 296 as a direct descendant of the Dino, however, think again because aside from the coupe bodywork, a pair of seats and a rear-mid- engine layout, the only similarity between the two is the V6 configuration – and even then the two units are utterly dissimilar. Whereas the older car’s engine is designed with both banks of cylinders in a narrow 65-degree V, the 2.9-litre unit of the 296 has adopted a flatter, 120-degree configuration that permits its turbochargers and plumbing to be mounted on top (a compact arrangement that helps lower the car’s centre of gravity).

Mounted longitudinally in the chassis, as opposed to the Dino’s transverse layout, the new engine also employs an electric motor – an MGU-K, to use its Formula 1-derived name – which is squeezed in-between it and the gearbox. The 2.4-litre V6 of the late ’60s produced 192bhp; compare that to the hybrid unit of today’s 296, which easily manages more than four times that: its maximum output nudging 820 horses is an astonishing figure for less than 3 litres. (To give it even greater context, Ferrari’s current 812 Competizione’s heavily breathed-upon 6.5-litre V12 produces “just” 789bhp.) Aside from the power unit, the car is packed with so much electronic wizardry governing engine, transmission and chassis settings (and each with its own acronym) it would take several pages to describe it adequately; suffice it to say that Ferrari’s “Defining Fun to Drive” tagline reads like a ludicrous understatement.

Although many of Maranello’s earlier cars were the work of the great carrozzeria Pininfarina, the 296 GTB is an in-house design, but no less gorgeous for it. Wonderfully realised and coherent, the silhouette bears a purity that’s missing in the orifice-overload of several recent Ferraris, while its sleek lines give nods here and there to the great P2 and P3 endurance racers of the 1960s. Moreover, it works aerodynamically, maximising downforce and clamping the 296 on to the road. The car I’m driving wears special Rosso Imola paintwork, whose intense ruby hue is redolent of the lambrusco wines grown not far from the factory and suits its uncluttered lines perfectly.

Inside the cockpit, this latest supercar is par for the Ferrari course, well finished with posh Italian leather in black and red stretched over seats, dash and door inserts. The aesthetic is purposeful and minimalistic, with a digital interface already familiar from the SF90 and the majority of controls loaded on to the steering wheel in F1 style. (Years ago I wasn’t so enamoured of playing Alonso or Vettel, but now I’ve become used to the arrangement I’m quite happy fiddling with the wheel-mounted manettino switch like Charles Leclerc, even if I’ll never get even slightly close to his lap times.) However, as passengers are now given their own digital display with which to monitor your behaviour, you’d be well advised to choose as your co-pilot someone unlikely to complain.

Unlike the SF90 and LaFerrari hypercar before it, the 296 is strictly rear-wheel drive, meaning those two fat Michelins at the back have to deal with all that power and torque, which is delivered to them via an eight- speed dual clutch gearbox (there’s also a third clutch that enables the car to be driven on electric power only). When locked in electric mode, a touch on the starter button simply illuminates the displays; start it up conventionally, though, and the burst of noise – as thrilling as on any regular Ferrari – serves as a promise of things to come. At the factory, this V6 is known as the piccolo V12, and you only need to hear it to work out why.

You can, as I said, drive the 296 electrically, which it will do at speeds up to 130km/h for around 15km – and noiselessly rushing along in this supercar is so bizarre it verges on the hilarious. But it’s that high-revving engine (it’ll spin to 8,500rpm) you really want, and as it spins ever faster the crescendo builds to a heavy-metal symphony of sound. Aided by the electric motor, acceleration is immediate, sustained and incredibly quick: using launch control, 100km/h comes up in 2.9 seconds with double that in just 7.3, while the 330km/h maximum is a merely a notional number on most of the roads you’ll be driving on.

Of course it isn’t only about speed, and the way the 296 comports itself in any given situation is beyond comprehension. Grip is outstanding and handling balance sweetly predictable at pretty much any velocity you care to dial in. It may be equipped with every driver aid – Side Slip Control, regenerative traction control, torque-biased differentials, active aero, braking by wire (and that’s just a few) – known to humankind, but it feels as natural as that Dino all those years ago, if admittedly a heck of a lot more rapid. The steering is connected, precise and perfectly weighted – but then you knew it would be, didn’t you? – and with carbon-ceramic discs and individual ABS control at each wheel, the braking power is phenomenal.

A couple of hours at the wheel of a car such as this offers the merest impression, but on this brief acquaintance I’ll simply say I’ve never driven a Ferrari – or any other automobile, for that matter – quite like it. It’s extraordinarily beautiful, fabulously fast and, as it says on the box, “fun to drive” (and then some), but there’s also the sense that electrification has lent so much to the Ferrari 296 that I’ve only scratched at the surface of its capabilities. Best supercar in the world? I should say so – and I can’t wait for my next opportunity to get to know it better.