The Mercedes-AMG GT 63 S 4-door may hark back to the street rods of the 1960s, but an astonishing range of abilities make it the thoroughly modern hooligan.

The 1960s and ’70s were the heyday of the muscle car, a genus of automobile developed by American manufacturers for street racing – though, of course, they’d never have admitted anything quite so crazily antisocial at the time. The formula was simple: take one two-door sedan or coupe, shoehorn into its front end the biggest and most powerful V8 engine in your parts inventory, tart it up with a fancy name and paint job, maybe a floor-mounted gear shifter and definitely a set of alloy wheels, and then place it at the front of your showrooms — usually with a surprisingly affordable price sticker on the windscreen – as a halo car for your brand. It was a strategy adopted by almost every major US auto brand. At one extreme, the desperately staid American Motors Corporation attempted to add sparkle to a lacklustre image through its Rambler Rebel, which after being force-fed a course of such steroids was unfeasibly badged as “The Machine”; at the other was General Motors’ Pontiac division, whose GTO was for a time regarded as one of the coolest cars in the States, in spite of a name shamelessly misappropriated from a racing Ferrari.

For a few glorious years, muscle cars were huge and then, suddenly, they weren’t. The double whammy of clean-air legislation and rocketing petrol prices after the 1973 oil crisis caused Americans to look seriously at smaller cars for the first time since the 1930s; sales of gas-guzzlers dropped off a cliff, while just as quickly car companies jumped off what had been a lucrative bandwagon. As the 70’s turned into the 80’s, misty-eyed car buffs would reminisce about the old street racers, conveniently forgetting the fact that, though fast enough in a straight line, they were generally woeful whenever a corner heaved into sight. Manufacturers even made occasional attempts to revive them, but to all intents and purposes muscle cars as we knew them were dead and buried. 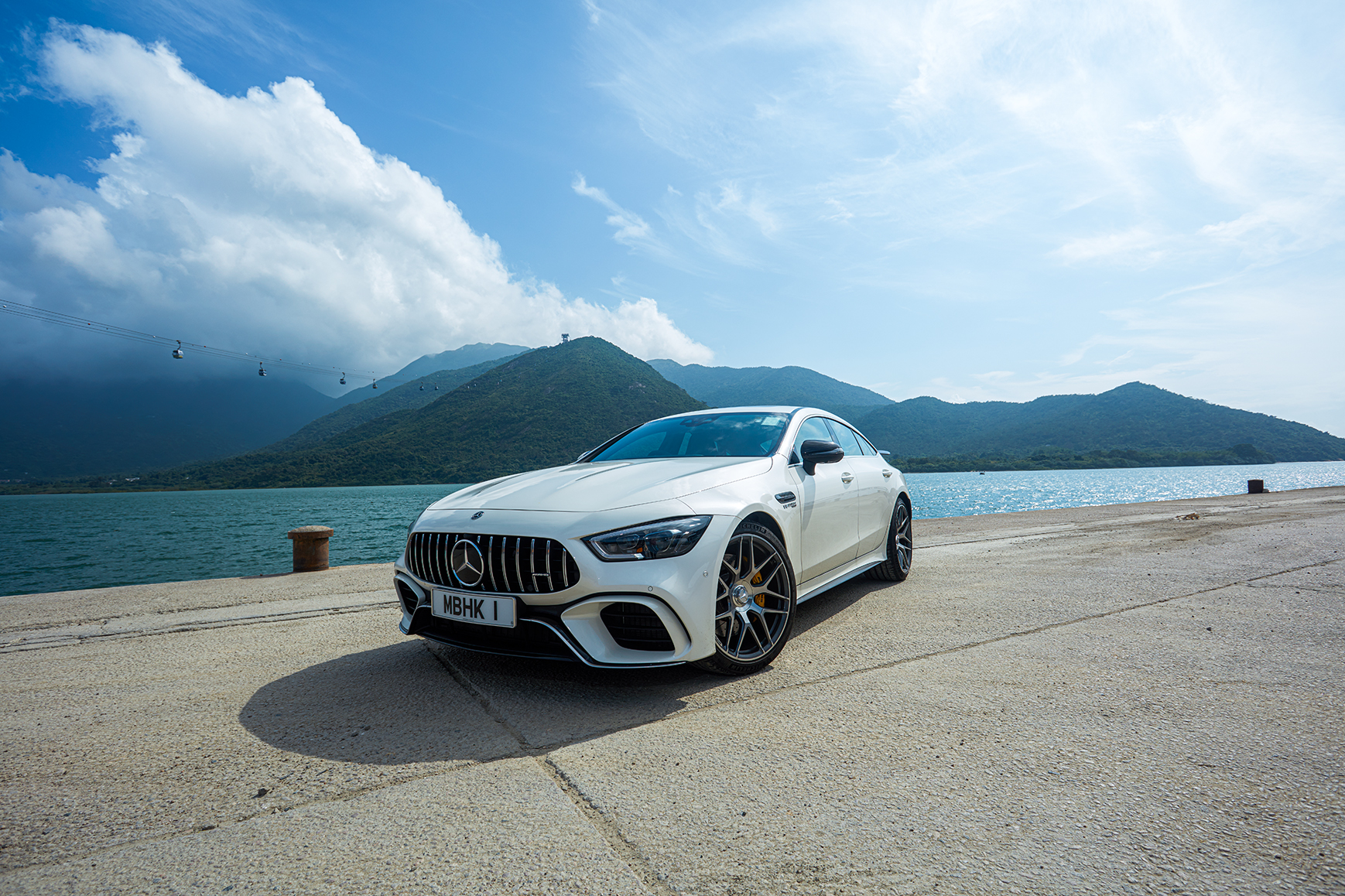 And then in the mid-1990s, along came the Germans, who by now weren’t just building big cars but were also developing large and, by the standards of the 1960s, outrageously powerful engines. Audi’s full-size S8 sports-luxury saloon of 1995, for example, had a 4.2-litre V8 beneath its bonnet and the second-generation model even boasted a 5.2-litre V10. BMW and Mercedes joined in too, each building V12s as well as a range of V8s – equally formidable firepower with which they could endow their own high-performance hot rods.

In a country with no overall speed limit, the end result wasn’t hard to predict: an arms race soon broke out between the three main German companies, in which engine outputs and speeds began to soar, just as they had across the pond in the 1960s. Rather than resulting in a new breed of muscle car, however, this battle for supremacy on the autobahn ultimately gave birth to what we can correctly regard as its logical successor, the super saloon. Unlike the stripped-down road rods that teenagers drove to the edge of town to drag race some 50 years ago, the muscle car’s 21st-century equivalent is an infinitely more complex, sophisticated and even versatile beast. Take the Mercedes-AMG GT 63 S 4-Door Coupé, whose key just happens to be nestled in my trouser pocket. Formidably powerful, with some 630bhp and an astonishing 900Nm of torque available from its twin-turbocharged 4-litre V8 engine, it’s fast enough in a standing start to keep up with many supercars, and will theoretically max out at 315km/h, even when fully laden with four passengers – who. while hurtling crazily towards the horizon, are cossetted in a degree of opulence that verges on the spectacular. It’s also brilliantly engineered. Whereas those early American beasts were fairly crude affairs, often bolted together by a small team working semi-independently in some shed at the edge of the factory, the AMG fairly bristles with leading-edge technology, from carbon- ceramic brake discs, four-wheel steering, air suspension and active aerodynamics to 4Matic+ all-wheel-drive, nine-speed transmission, variable electromechanical steering, and a super-stiff construction that mixes carbon fibre, aluminium and steel. There’s also a suite of no fewer than six Dynamic Select drive modes that, should you wish it, include the ability to more or less switch off the traction control and hang out the tail. Just the job for the supermarket run…

Where it does bear some passing resemblance to the traditional muscle car is in its looks. Granted it has four doors, as opposed to the two of the ’60s original, but the low coupé roofline and narrow side windows are spot on, as is the long bonnet, which appears to go on for ever. Festooned with intakes and vents, and with AMG’s now- signature vertical grille bars that recall the angry snout of the 1952 Panamericana Carrera-winning Mercedes 300 SL, it’s a mean-looking machine indeed – magnificently brutal, purposeful and laden with presence, if not (or at least by most people’s standards of pulchritude) especially beautiful.

Open the doors – front or back, it doesn’t really matter – and you enter a very different world, one of Hollywood glamour and levels of material quality and luxury that don’t fall far short of those aboard an S-Class limousine. The fascia glitters with bejewelled vents shaped like jet intakes; the instrument and infotainment displays are grouped a long gleaming panel; and beneath them runs a plank of polished carbon fibre edged by Benz’s now-ubiquitous mood-light strip. 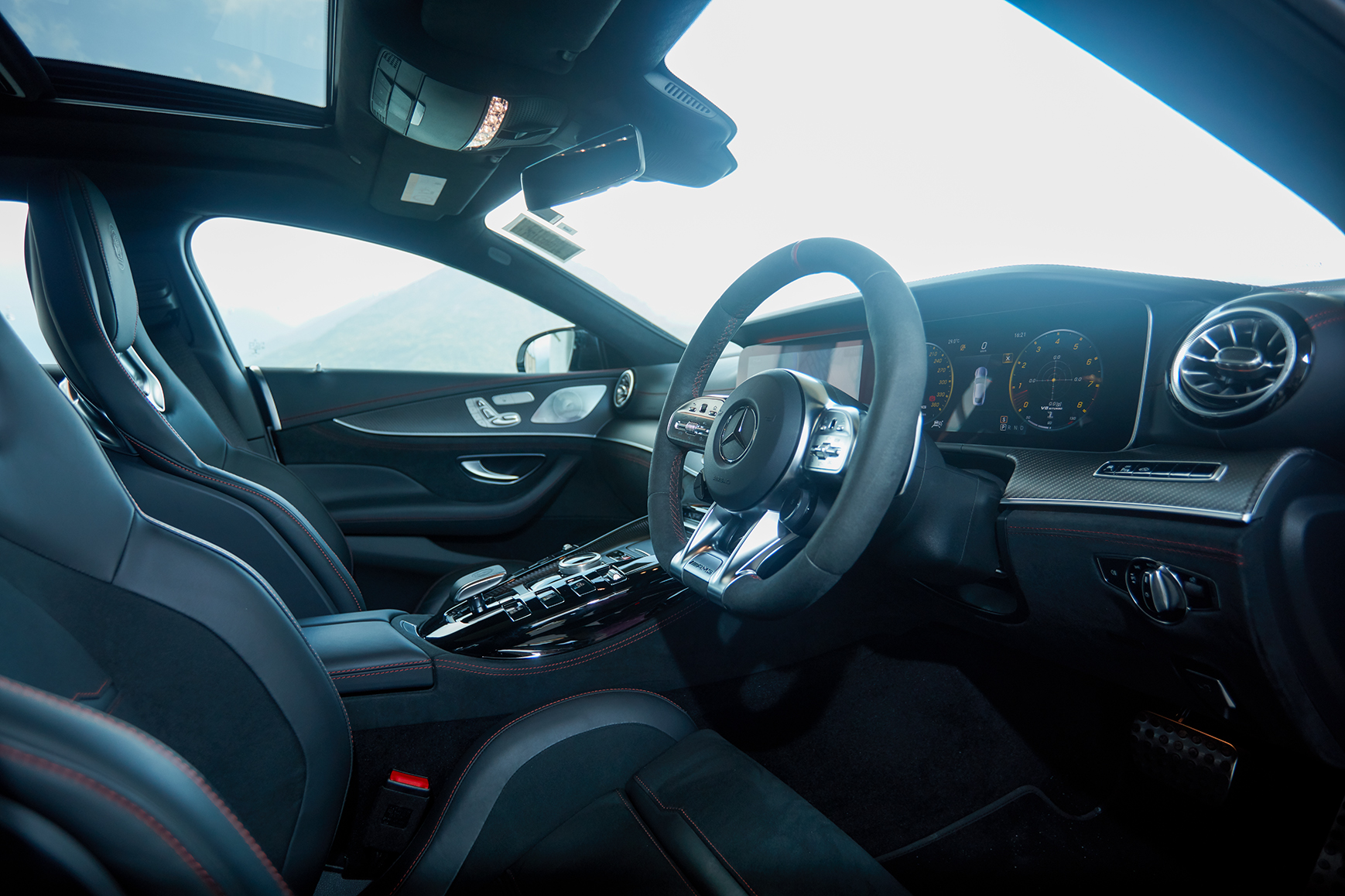 Between the racing-style, leather front seats lies a broad, high console – where, mercifully and for once, the AMG people have seen fit to locate the gear selector (as opposed to Mercedes’ preferred steering-column wand). Adjust seats and the small, chunky steering wheel to your preferred settings and you probably won’t find a better driving position anywhere. And though space in the back is restricted for what is, after all, a 5-metre-long motor car, the seats – clad in nappa leather – are as lavish and enveloping as those in the business end of the cabin.

Up in the hot seat it’s often difficult to reconcile the GT as being a saloon at all, let alone one with four doors, so closely does the driving experience replicate that of a genuine sports car. It is, as I’ve said, monumentally fast, with instantaneous throttle response and a total absence of turbo lag to match, while the sense of alertness and focus are almost unheard of for a car of this size – though there’s an inevitable trade-off in that even in Comfort mode, the ride can be harsh and on occasions unforgiving. But though your passengers may be inclined to complain now and then, you almost certainly won’t, because this is a genuinely thrilling machine to drive, with razor- accurate steering and a powertrain whose relentless explosiveness has to be experienced to be believed.

Much the same goes for the chassis, which, thanks partly to the genius of 4Matic+ technology, again seems to defy the Mercedes’s considerable dimensions and 2-tonne heft. Point the AMG into a corner at the most insane speed you can think of and, well, it just goes around, the incredible traction and composure further enhanced by the nimbleness of all-wheel steering and body control that’s rock solid.

Versatile and brilliant though the GT 4-Door undoubtedly is, it’s hardly the machine to load up for weekend jaunts or even the daily drive to the office. In spite of the luxurious trappings, it’s simply too hard edged, too much of a hooligan for mundane pursuits such as those. Drive it like the supersized sports car it is, and it’ll set the pulse racing, turn your legs to jelly and have you wondering whether any automobile can be such ridiculous fun as this. In fact, you almost certainly won’t be able to live without it – or at least so long as there’s an alternative to this modern-day muscle car parked in your garage, for the time when the family finally dig in their heels and announce that they’re calling a taxi.