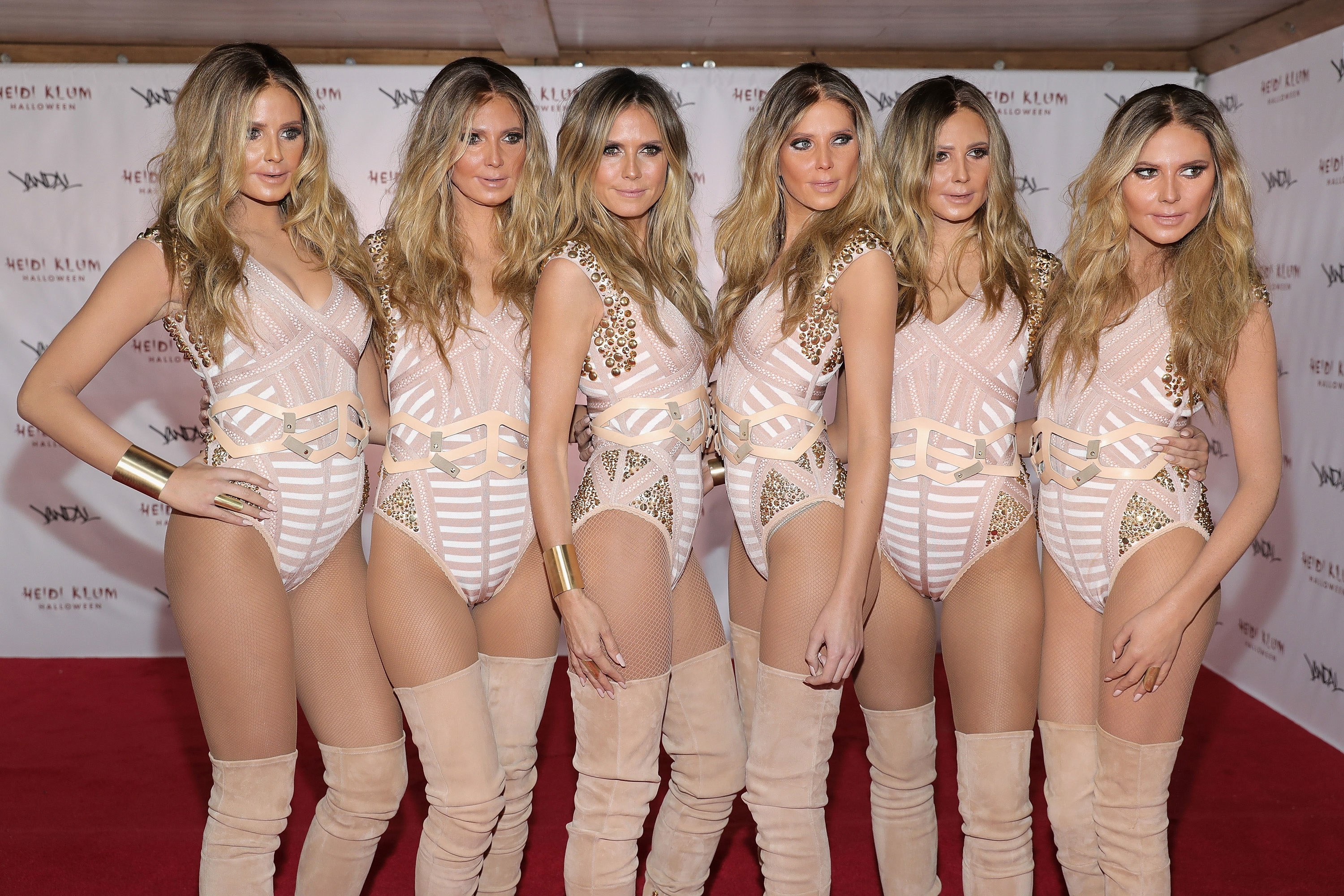 Aside from being a judge of Project Runway and America’s Got Talent, German supermodel is also popularly known for her out of this world Halloween costumes and parties. So much so that she is dubbed the “Queen of Halloween”. The star has been throwing annual halloween parties since 2000. No one can ever beat her Halloween costume and it seems like her costume is getting better and better each year. As we wait for the next costume–that will surely make our jaws drop–let’s see a throwback of Klum’s ten best costumes she had been wearing from the past 17 years.

In 2016, Heidi Klum was just being herself. Maybe you think there is nothing special with it. But Klum, never being an ordinary especially during halloween, made clones of herself. There were not only one but five Heidi Klum. Yes, you read it right, five. Heidi Klum made five people become her clones. Can you spot the real Klum?

Inspired by the leading lady of Who Framed Roger Rabbit?, Heidi Klum dressed up as Jessica Rabbit in 2015. She went all out in slim-fit red dress and enhanced her figure with prosthetics, bold makeup and red wig.

In 2014 the supermodel transformed into a beautiful butterfly. The costume completed with a massive rainbow-hued wings and fascinating bug eyes. She waltzed to New York City street with this bold and magnificent costume.

Heidi Klum never fail to impress us and in 2013, she dressed up as an 95-year-old version of herself. Klum always pays attention to detail0s, and for this look, she changed her hair into gray and used makeup and prosthetics to age her skin with veins and wrinkles complete with a walking stick.

Hurricane Sandy hit America’s East Coast in 2012, so Heidi Klum decided to change her annual Halloween bash to December 1. It was worth the wait; she wore a Cleopatra-inspired dress and gilded gold headdress. Her makeup artist, Bill Corso, applied hundreds of crystals on her face to highlighting her cheeks, lips, and the bridge of her nose.

In her 2011 annual halloween party, Heidi Klum dressed up as  a dead body with the first layer of skin ripped off on an autopsy table while two guys dressed as blood-splattered doctors. She wore red contact lenses and rotting teeth to look more dead than ever.

Heidi Klum transformed into a Transformer in 2010. Dressed in purple latex all over her body and red robot body, Klum made it extra by wearing a pair of hydraulic crane shoes.

We are now going to 2002 where Heidi Klum dressed up as the one of animated flappers which everyone loves: Betty Boop. She rocked the look with fake long eyelashes, curled wig, and sparkly fake jewels.

Last but not least, Heidi Klum made an entrance to her 2001 halloween party as bloodied version of Lady Godiva, an 11th -century Anglo-Saxon noblewoman. She was on horseback wearing white catsuit and a long blonde wig. And this is one of the best entrances that ever made for sure.

About this year’s costume, Heidi Klum gave us some clues on her Instagram. The first clue was on September 26 where she uploaded a sneak peek of a mask being made. Then, on October 1, she uploaded another video. But this time was a video of Mike Moreno, the artist who made the prosthetics of Klum’s costume for the last four years, painting the mask. Another sneak peek she gave us on October 6 was a video of someone sculpting a clay mask. Last (but maybe not least), Klum uploaded another video, but not the mask, of two artificial teeth sets.

Heidi Klum is really good in getting us curious. We need to wait until the queen shows us another magnificent costume when the time is right. Not too long now!

Sign up to get the latest luxury and lifestyle news delivered to your inbox.
Sarah Mamesa