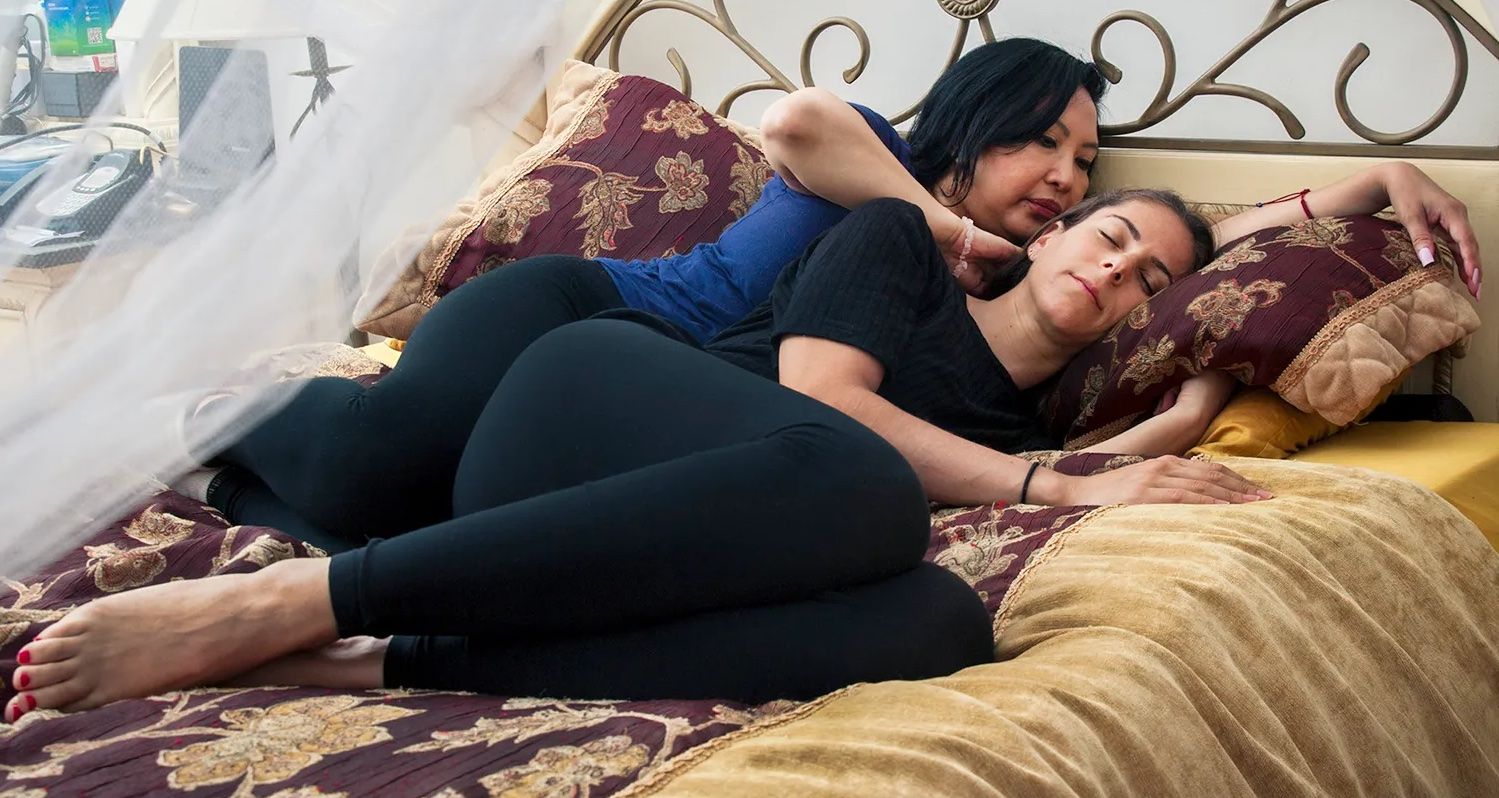 You might well recall the name and vibe of American artist Jamie Diamond. She visited the city in 2019 as guest and headline artist of Prada Mode Hong Kong at Tai Kwun, and exhibited Doll’s House, a series of intimate and eerie photographs that captured the outsider art-making community in the United States known as Reborners, a group of female artists who make, collect and interact with disarmingly lifelike baby dolls. The project allowed Diamond to highlight “the grey areabetween reality and artifice”, where relationships are constructed with inanimate objects.

And now the performance artist, lecturer, writer and undergraduate photography coordinator of the University of Pennsylvania’s Fine Art Department is back, with another engaging yet disorientating visual outpouring of the human desire for intimacy, real and imagined, yet this time, with entirely real people. And she uses the subject of touch or, more specifically, non-sexual platonic intimacy and commerce, as a platform for her inquiry.

Diamond has been investigating the service economy surrounding non-sexual platonic intimacy since January 2015. Real platonic human contact and interaction is available hourly, for a price, and brings with it a new set of terms and conditions regarding boundaries and consent. Diamond explores how this new service economy has created a different form of authenticity, bound by money and time.

She began her research in Japan, where rental family and friend agencies have existed since the 1990s, and where it’s not uncommon to rent a friend or family member if the relevant social or professional protocol demands it. Diamond interviewed some of the founding performers and discovered that these roles can last anything from a few hours to several years, and while many of the rentals serve to satisfy rigid Japanese social protocols, they often serve a simpler, more personal craving. “It was important for me to begin my research in Japan, as this really was the birthplace of the industry,” she says.

After four years of research, Diamond decided the most authentic way to document the project was to immerse herself in it. She took her first photograph on the subject in March 2019, after hiring a Handsome Weeping Boy in Tokyo. “The performer shows a series of sad films and stories before beginning to cry. His aim is to make his audience cry and wipe away their tears, the ultimate intention being to expose your vulnerability to a stranger,” she elaborates. But having made her first photograph – and as an outsider – various cultural complications needed to be acknowledged, so Diamond chose to base her subsequent focus closer to home.

“As platonic intimacy for hire begins to find its place in the US, it manifests itself in different ways adapting to domestic cultural norms, with one of the main focuses being non-sexual physical intimacy and touch.”

And so, under the project moniker Skin Hunger, Diamond collaborated with professional Cuddlers who offer paying customers the opportunity to experience non-sexual intimacy with a complete stranger. “I hired my first Cuddler in 2019,” she says, adding she has “since worked with more than three dozen both in-person and virtually”.

Touch is an essential human need and is embedded in the social structure of our lives; it affirms our relationships and our emotional and social behaviours. Research on touch shows it has profound impacts: it releases endorphins and oxytocin, which helps reduce pain and stress, enables better sleep and increases overall wellbeing. The loss of social touch has been a consequence of the Covid-19 pandemic but even before the pandemic, many people were deprived of touch often without realising it. Overall, we’re having fewer interactions and connections, there are major social changes due to the increasing digitisation of our interactions, through automation, technology, and social media.

All of which makes Diamond’s project nothing if not fiercely topical. To wit, author Kazuo Ishiguro’s prize-winning Klara and The Sun features an artificial friend (AF) in a dystopian world as its main protagonist. Ishiguro’s story highlights how technological advances change people’s sense of what it is to be human; people around the world are said to be having less sex, while simultaneously the metaverse and the march of digital living may see the rise of “intercourse tech” or digisexuality, likely to be monetised and controlled entirely by the tech moguls; and a current exhibition Useless Bodies by artists Elmgreen & Dragset at Fondazione Prada in Milan explores the present condition of the body in the post-industrial age, in which it seems our physical presence is losing its centrality, or is even completely superfluous. That shift impacts every aspect of our lives: from our working conditions to our health, our interpersonal relationships and the way we retain information.

Says the duo: “Our bodies are no longer the main agents of our existence. They don’t generate value in our societies’ advanced production methods as they did in the industrial era. One could claim our physical selves have even become more of an obstacle than an advantage. In the 19th century, the body was the producer of daily goods, whereas in the 20th century the body’s role became more that of the consumer. Twenty years into the 21st century the status of the body is now that of the product – with our data gathered and sold by Big Tech. With the publicly available knowledge surrounding the harvesting of data from tech companies being so inane, and the rapidly accelerating rate at which such companies are expanding into every aspect of our lives, it does sometimes feel a little scary to thinkabout our bodies’ future role.”

Meanwhile, Diamond discovered that professional Cuddlers provide a social dynamic and context that cultivates intimacy. “These conditions counter some of the social conventions and implicit norms that actually inhibit authentic intimacy,” she says. “Boundaries and consent are core principles, a Cuddle Party provides a teaching on how to articulate your needs and wants; and what it means to comfortably receive and to give or to deny touch.” Is there a fine line between the platonic and the sexual in such an environment? “Yes – there can be. That’s why communication and establishing boundaries are so important.”

Diamond hired her first professional Cuddler in 2019. “I was given the address prior to our meeting and on arrival was met by Elka at the door. She directed me into the bedroom and instructed me to make myself comfortable on the bed. At this point the code of conduct for our meeting was discussed, establishing the precise boundaries of contact and consent for the duration of the session.”

Was Elka happy to be filmed and with such level of visual intrusion? “For the first half of the session there’s no recording whatsoever, it was important to me that the authenticity of our experience was undisturbed. The second half I documented in stills and video and it was fine. I see the photographs serving as a document of this performance and the video as an extension of the photograph. This same pattern continued throughout my subsequent sessions.”

Until, that is, the world woke up to Covid-19. “Once the pandemic struck in early 2020, physical sessions became impossible and I knew the work would have to take on a different form, expanding the project from the physical into the virtual realm.” So Diamond spent the subsequent months meeting virtually with active touch practitioners, interviewing them and engaging in virtual cuddle sessions. “The sessions are of course wildly different once the experience is stripped of its fundamental physical component, with alternative methodologies employed in order to simulate the missing experience of actual touch, which include eye gazing, self touch, inanimate object touch, virtual cuddling and narrating mirrored behaviours.”

As a result, Diamond woke up to the power of the virtual platform in ways that surprised her. “My first experience of a virtual session elicited such unexpected feelings,” she explains. “There was something very poignant and very moving about the experience of even touching an inanimate object; hearing the practitioner’s voice; hearing someone narrate the experience of touch. During eye gazing, it felt so strange to be looked at so deeply for so long through a screen. I felt a connection, despite the fact that we were miles and miles apart. There wassomething that felt very real – maybe it was because of the one-to-one ratio, and our physical proximity to the cameras on our computers.

Once in-person sessions became safe again, Diamond began photographing Elka with all two dozen of her clients in her New York bedroom. And following several in-person platonic cuddle sessions, she was introduced to an additional aspect of the community, the Cuddle Party. Cuddle rooms are typically constructed for Cuddle Parties, events where touch is deemed acceptable, strangers meet to engage in consensual touch. Group Cuddle Parties begin with a 60-minute reading of the rules of engagement, as well as a guided role-play of effective ways to initiate, accept and deny physical contact.

“I was invited to take part, and allowed into the spaces to photograph and record the environment and marks left behind, as well as the hand-drawn posters hung throughout the space illustrating the very clear boundaries of agreeable contact and consent,” she says.

Diamond goes on to explain that much of the visual language is inspired by Betty Martin’s Wheel of Consent on the art of receiving and giving touch, and actively unlearning the fundamental roots of consent back to our childhood conditioning. The Wheel of Consent “offers a deeply nuanced way to practise consent as an agreement that brings integrity, responsibility and empowerment into human interaction, starting with touch and relationships, and further expanding our understanding of consent to social issues of equality and justice,” she elaborates. As of now, these posters are in the process of being made into embroidery by Gen-Z female embroidery American artists.

Skin Hunger suggests we’re at a fascinating cultural juncture and confronted by serious questions regarding intimacy, surrogacy and human connection. The work is both a reflection of where human relationships are now, and an indication of what is yet to come. “I’m interested in meaningful human connection, the value of touch, in the effect of its absence, and in the changing social and moral viewpoints surrounding its application,” says Diamond.

Which takes us full circle to her original line of inquiry. If we can pay someone to cuddle with, or pay someone to have sex with, or rent a friend or family members, do we still crave authenticity?

“I think that’s the big question,” she says. “Is authenticity reserved for the ones you’re closest to, or can that authenticity exist among strangers? What do you need for something to be authentic? Can commoditised intimacy be considered genuine intimacy? Our imaginations and our needs embrace many possible intimacies, but the sacrosanct notion that these can only be effectively serviced by those who are closest to us no longer stands.”

And does she anticipate an immediate future in which humans and machines develop relationships? “Maybe in the future human- machine intimacy will be normalised, and maybe it will have real benefits that enhance relationships like we’ve seen with cuddling. I often wonder: if this does become a reality, what happens then to human-to-human connection and interaction? Sounds like a notion to cuddle and skin hunger over.”