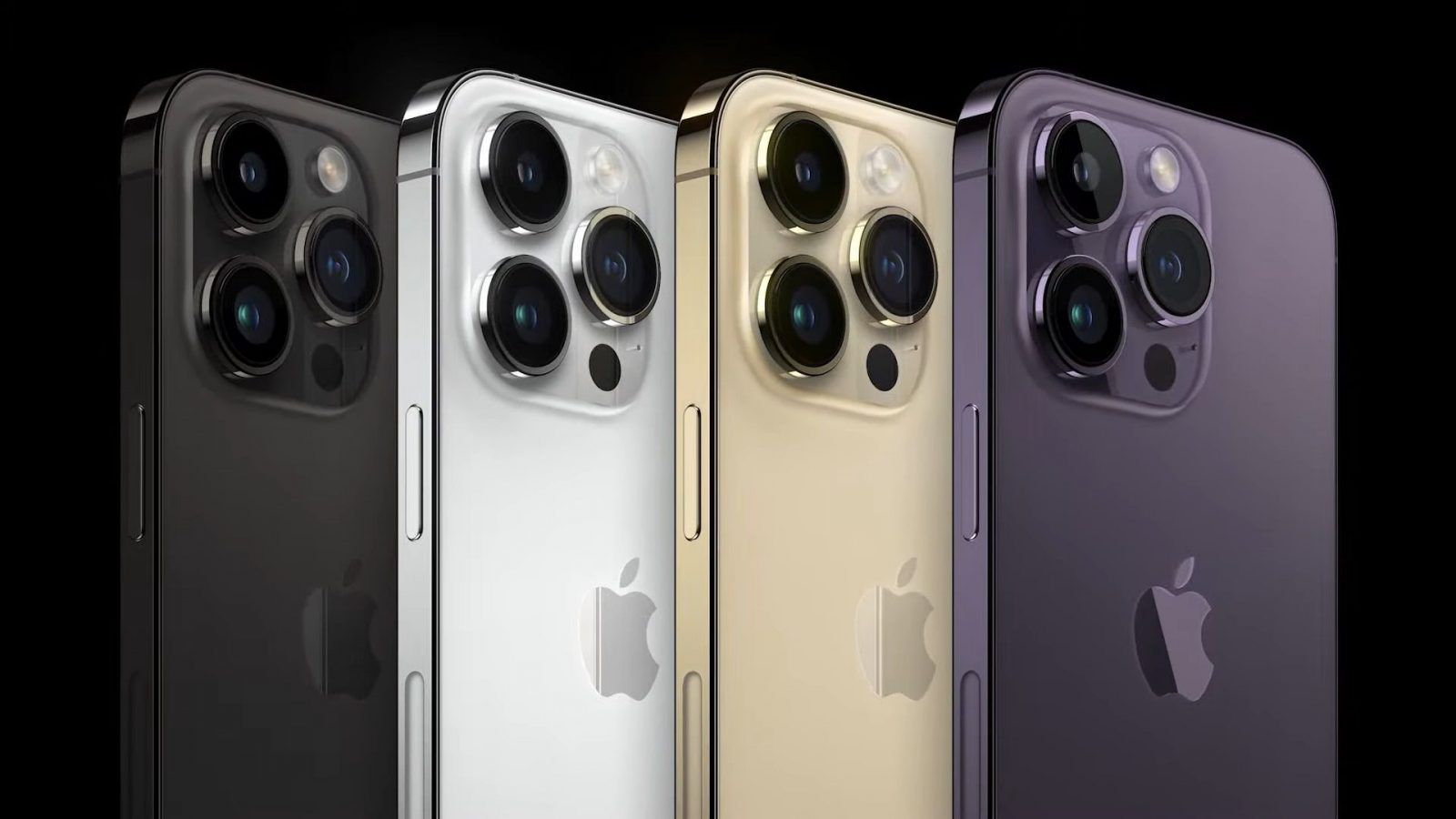 The Apple Event 2022 was held at the Apple Park Campus in Cupertino, California, the US, on 7 September.

This was the third live Apple event of the year after the March event and June’s WWDC 2022. The event had the tagline ‘Far Out,’ with the company’s famous logo designed in the form of stars set against a night sky.

As expected, Apple launched the iPhone 14, Apple Watch Series 8 and AirPods Pro 2 at the ‘Far Out’ event. But there was no appearance of the mixed-reality headset.

The iPhone 14 was certainly the scene stealer, with two Pro models and two normal models. Most remarkable were the camera upgrades, especially in the Pro models and the introduction of the dynamic island.

The event was live streamed at Apple.com, the Apple TV app and Apple’s official YouTube channel. This was Apple’s second in-person event in 2022. Presenters from the company, including CEO Tim Cook, simply announced the product launches.

Here are the major updates from Apple Event 2022

“Today, we are here to talk about three products that have become essential for our lives — iPhone 14, Apple Watch and AirPods,” he said, as he went on to explain how the devices are integrated to work in tandem with each other.

Several senior Apple staffers then introduced the products and talked about their features. 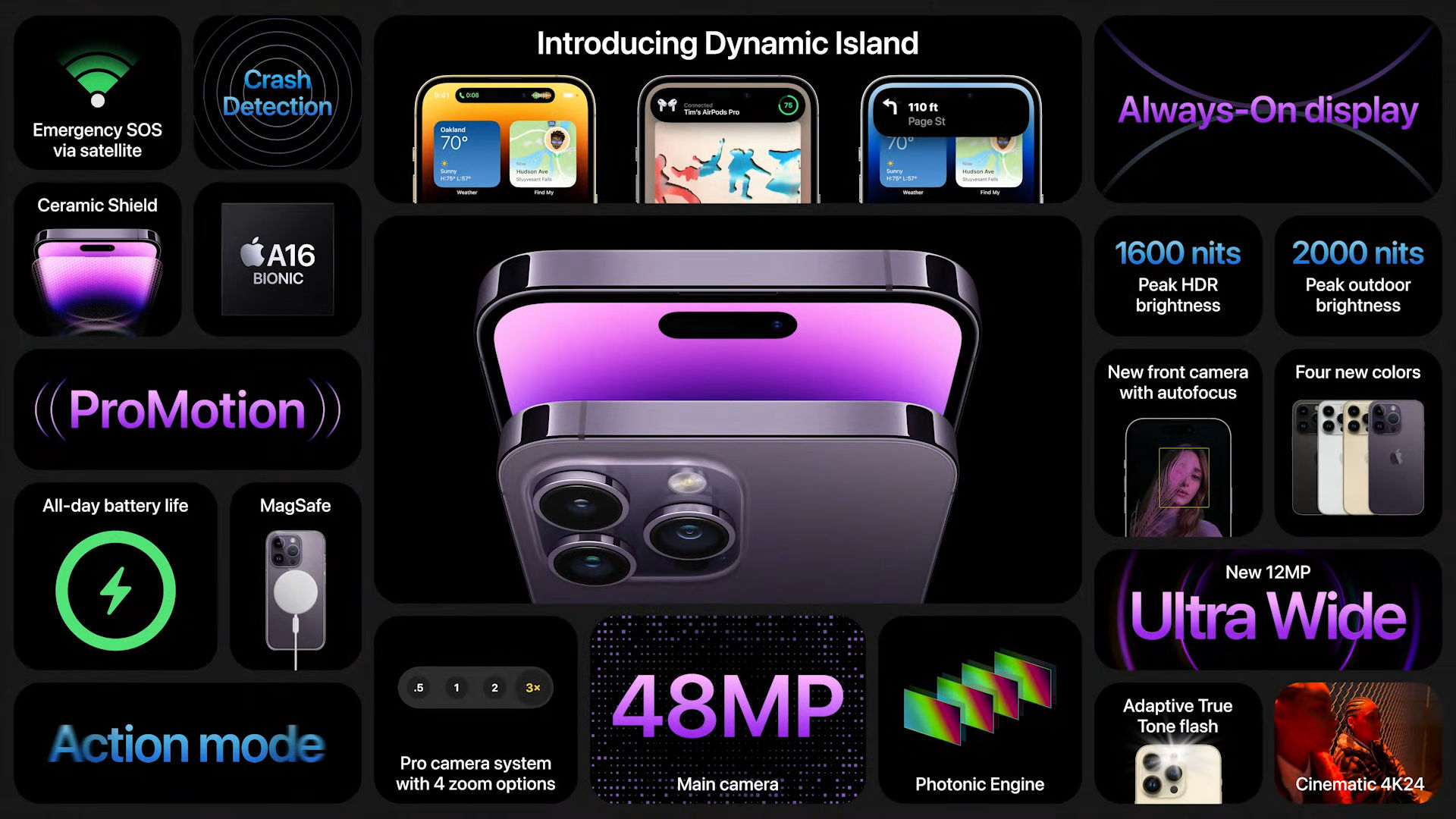 Apple launched the iPhone 14 regular and Pro models, numbering a total of four.

The company said that the Pro models are the “best iPhones we have ever created.”

The iPhone 14 Pro measures 6.1 inches, and the iPhone 14 Pro Max is at 6.7 inches. They come with a dynamic island notch, which changes animation based on the phone activity — for instance, music or gaming.

While the lock screen will support an always-on display, Apple introduced a new A16 chip on the iPhone 14 Pro models — and with it comes 16 billion transistors, a six-core CPU and two high-performance cores. It is faster than anything before while consuming less battery.

Of course, iOS users will revel in the camera functionality this time for the Apple iPhone 14 Pro models. 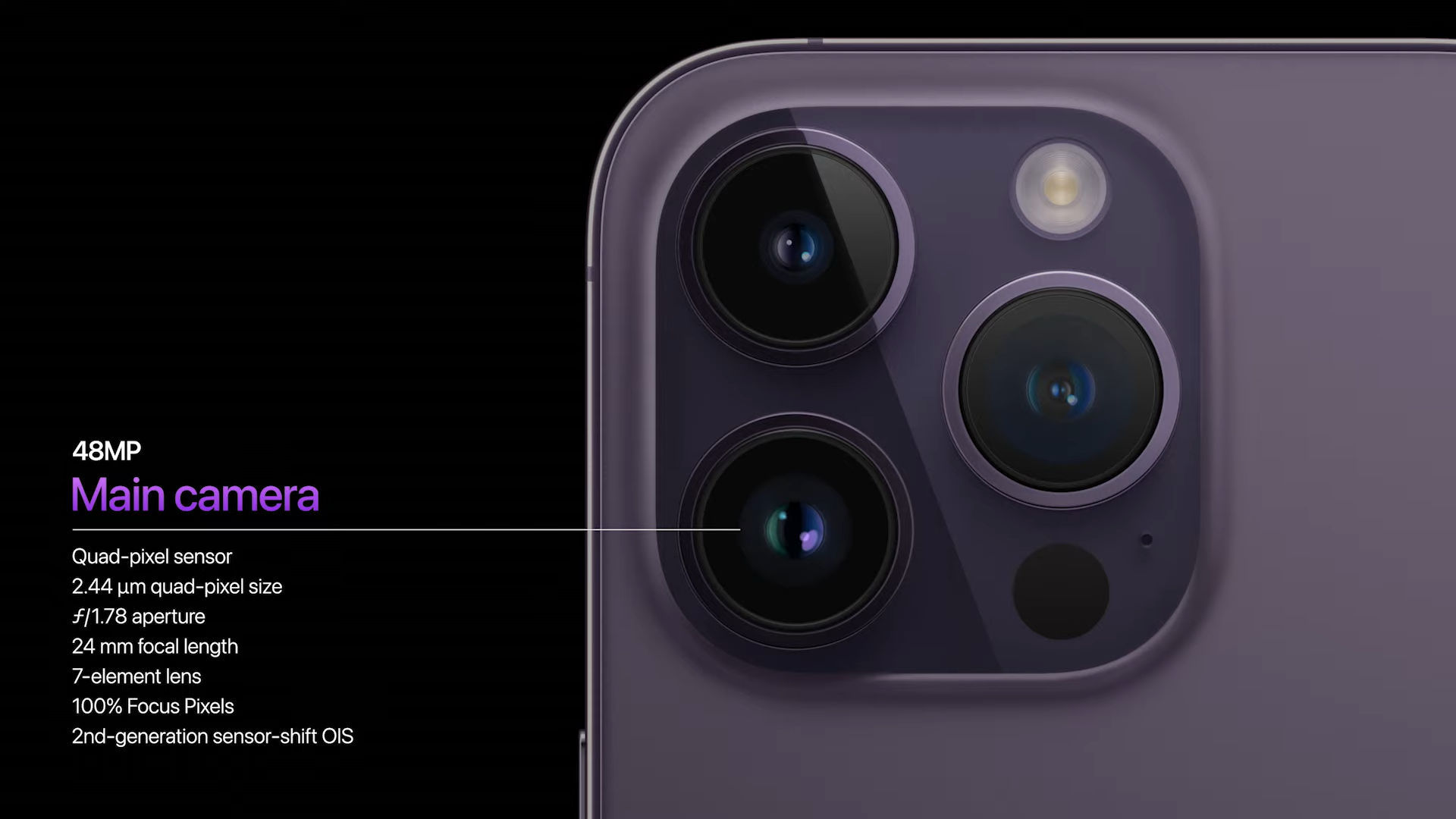 The camera comes with 48MP with a 24mm focal length. There is a quad-pixel sensor to further improve light in pictures.

The main camera is able to capture images in all light conditions. A new 2x telephoto option has also been added to deliver larger pixels. Nine LEDs are present in the flash, as well as a new True Depth camera and the proximity sensor placed behind the display.

Another new feature, Apple ProRAW, is also incorporated to give pro-photographers complete control over white balance, sharpening and other features.

Like Apple Watch Series 8, which was introduced before, the Apple iPhone 14 Pro models can detect crashes and warn emergency responders. 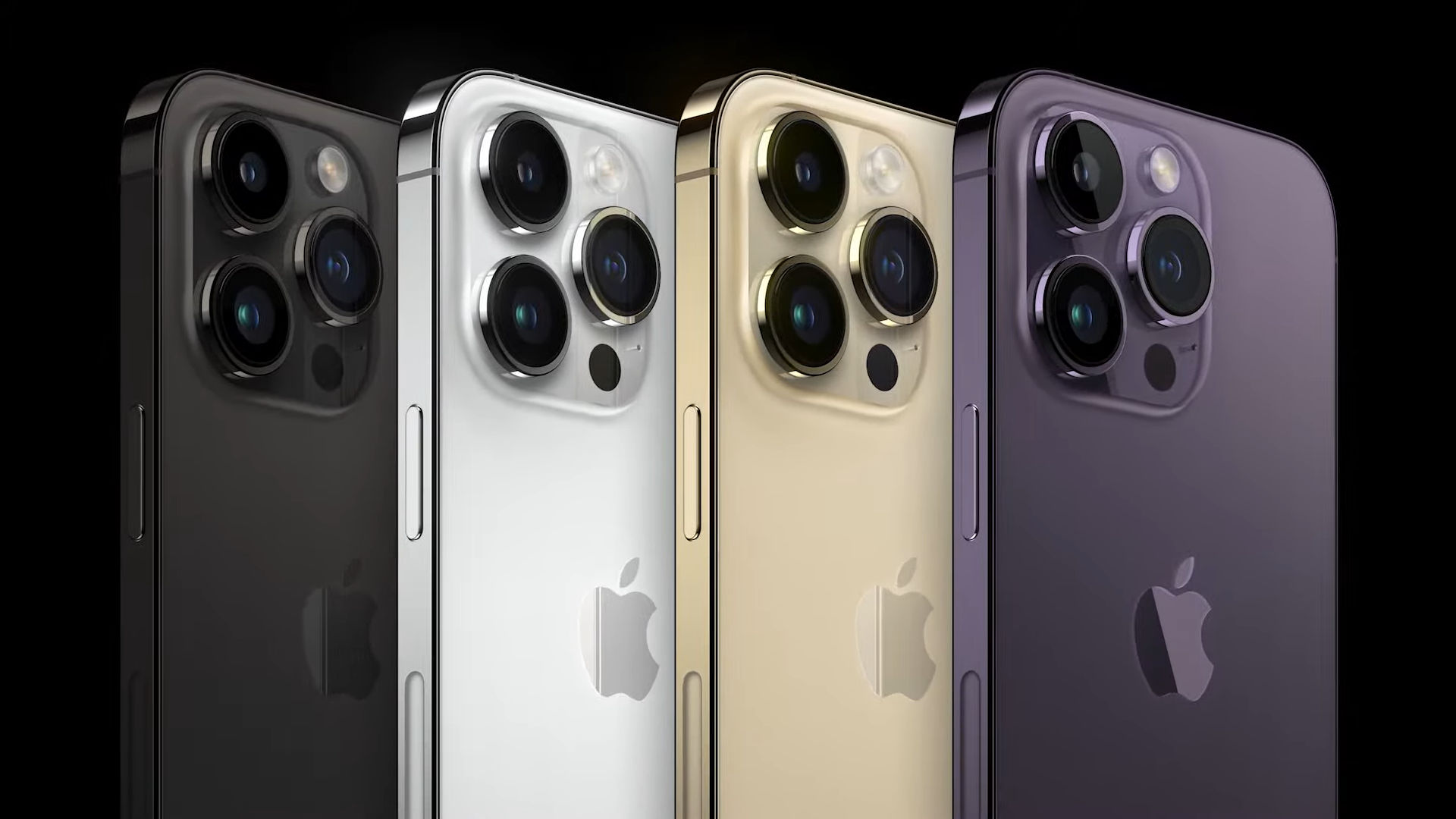 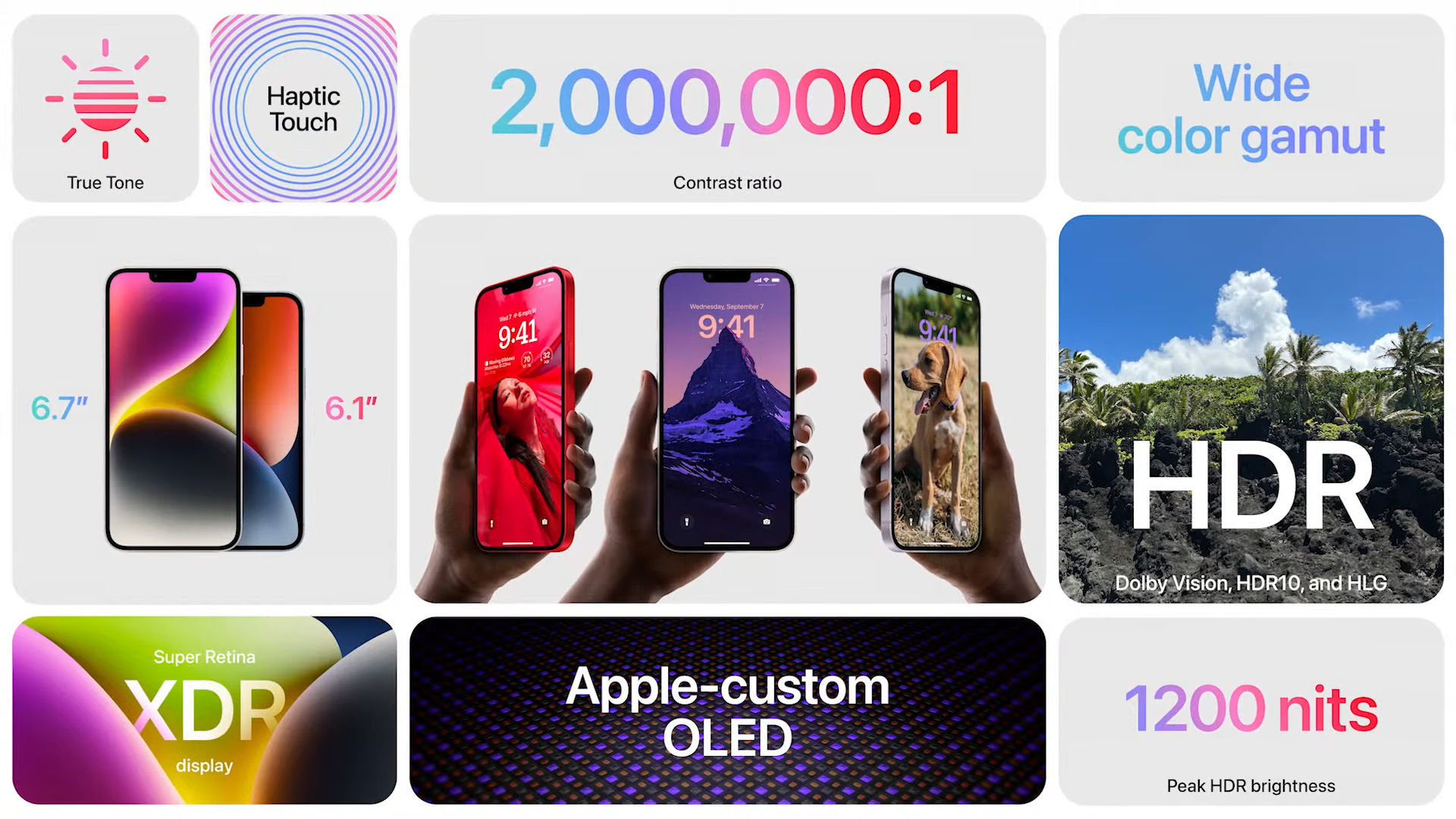 The phones have super retina XDR display with OLED tech. They come in five colours — starlight, midnight, blue, purple and red. They are fitted with the A15 Bionic chipset, which is the same as in 2021 Pro models but, Apple says, is 18 per cent faster.

The main camera of the Apple iPhone 14 is 12MP, but with a larger and faster sensor. 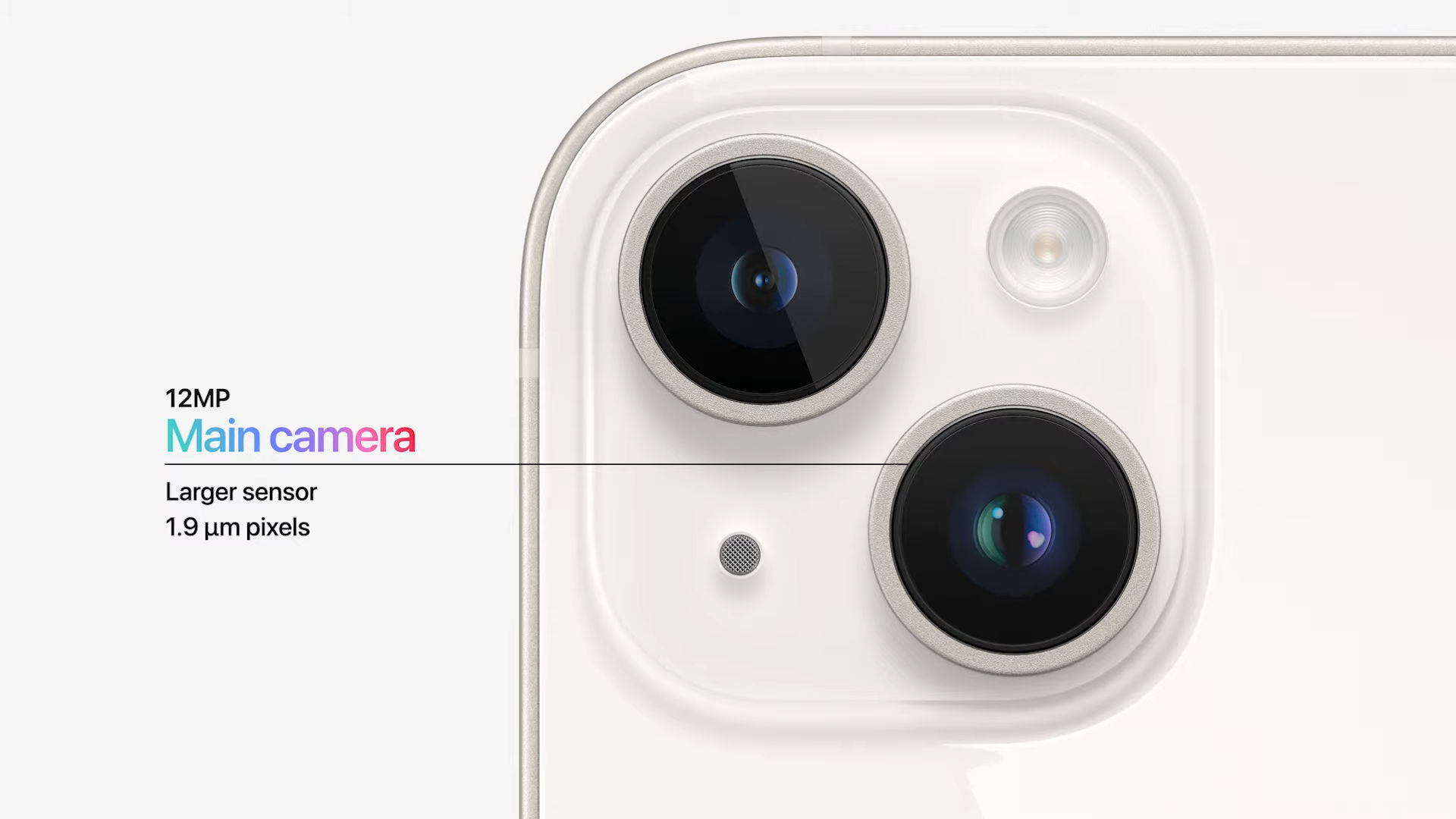 One of the major announcements at the Apple Event 2022 concerning iPhones was the company’s declaration that all US models will be without a SIM tray. This is why Apple spoke about the eSIM on Apple iPhone 14. The company is pitching it as the future of connectivity. In eSIM, there is no need for SIM cards, and therefore, the phone becomes more secure.

Another significant feature introduced via iPhone 14 was emergency SOS via satellite. In this, the phone can connect with a satellite in case of emergency. All that users have to do is point directly at the sky towards a satellite. There is SOS software in the phone to guide users to point in the exact direction of a satellite and what to do if the satellite moves.

Being an emergency feature, it has a limited 15 seconds of ability to send messages. 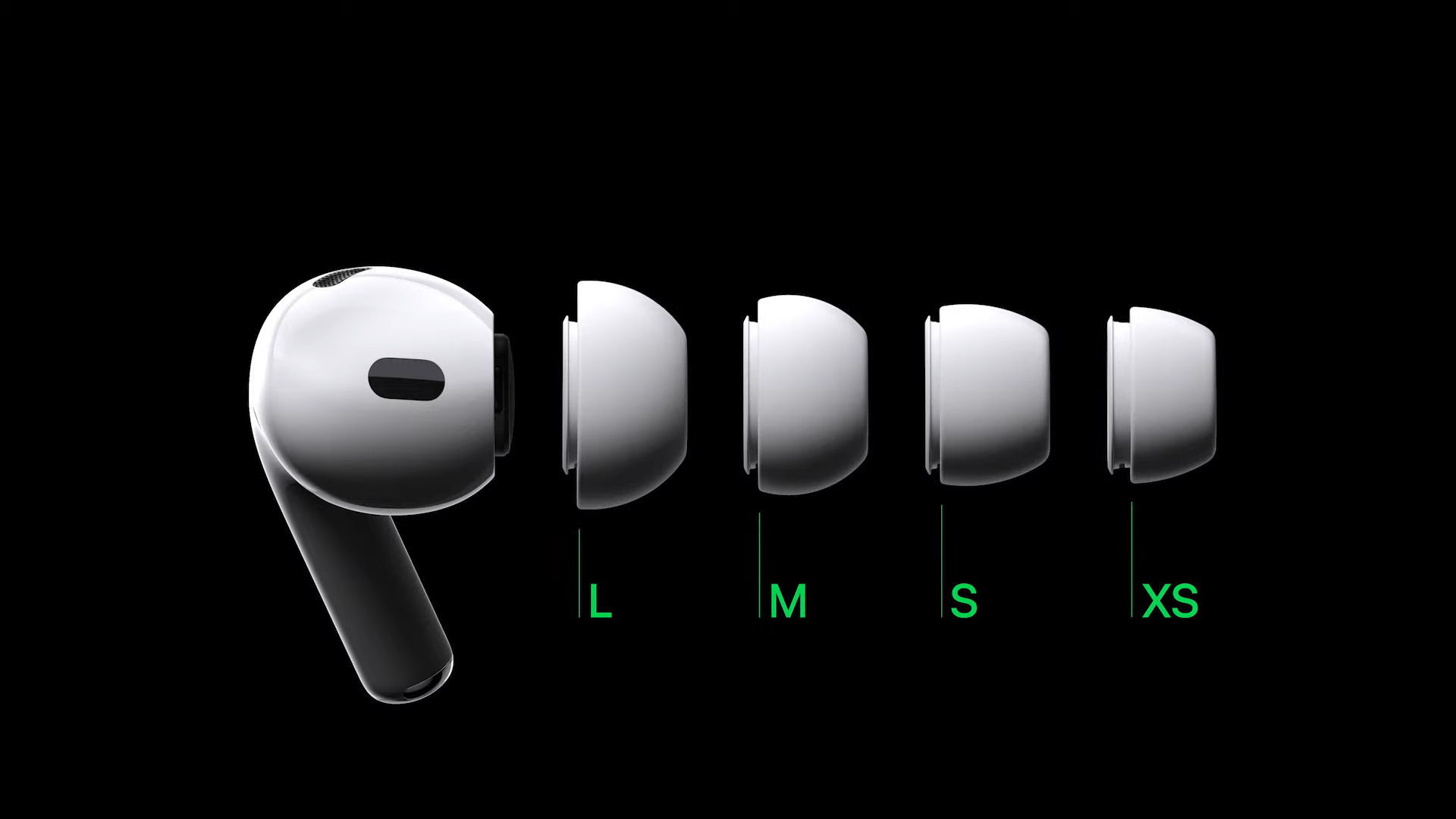 A new H2 chip for “breakthrough audio experiences” was introduced with AirPods Pro 2 at the Apple Event 2022.

The new AirPods Pro can play or pause media. There is new touch control. The volume can be adjusted by a light swipe up or down. There is also a low distortion audio driver and custom amplifier. Active noise cancellation is also present on AirPods Pro 2. 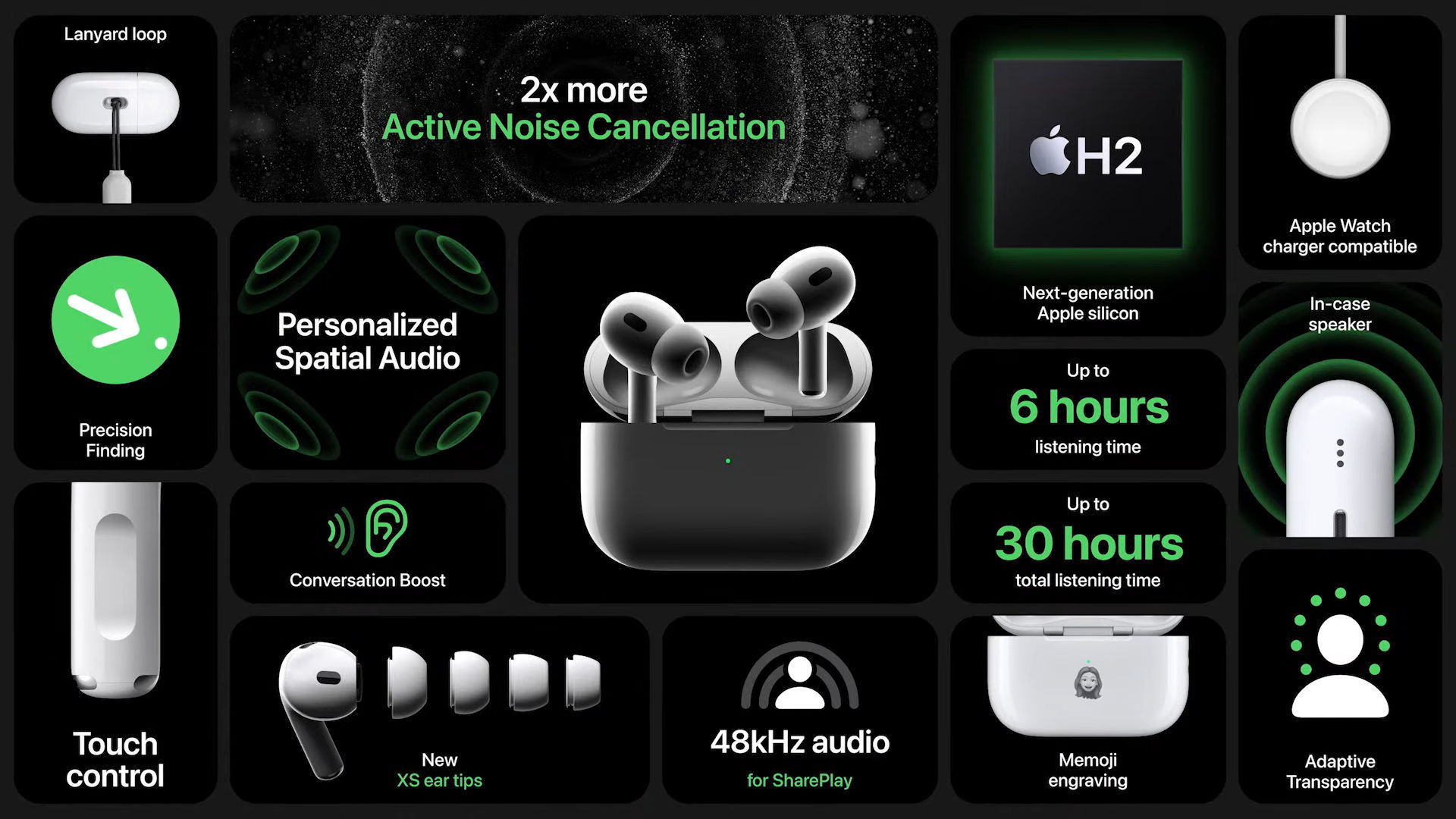 Owners can now find their cases easily with a new precision finding feature using their phones. A speaker at the bottom of the case makes a sound for easier detection. A linear loop has also been added to the side to make carrying the case at all times much easier.

The biggest feature, however, is the Spatial Audio for a “next level listening experience.” According to Apple, it can make the sound appear as if the listener is on a stage listening to a live performance.

The iOS16 can be used to create a personalised Spatial Audio experience.

AirPods Pro 2 will be available from 23 September and is priced at USD 249 (approx. RM1,120). Pre-orders can be done starting 9 September. 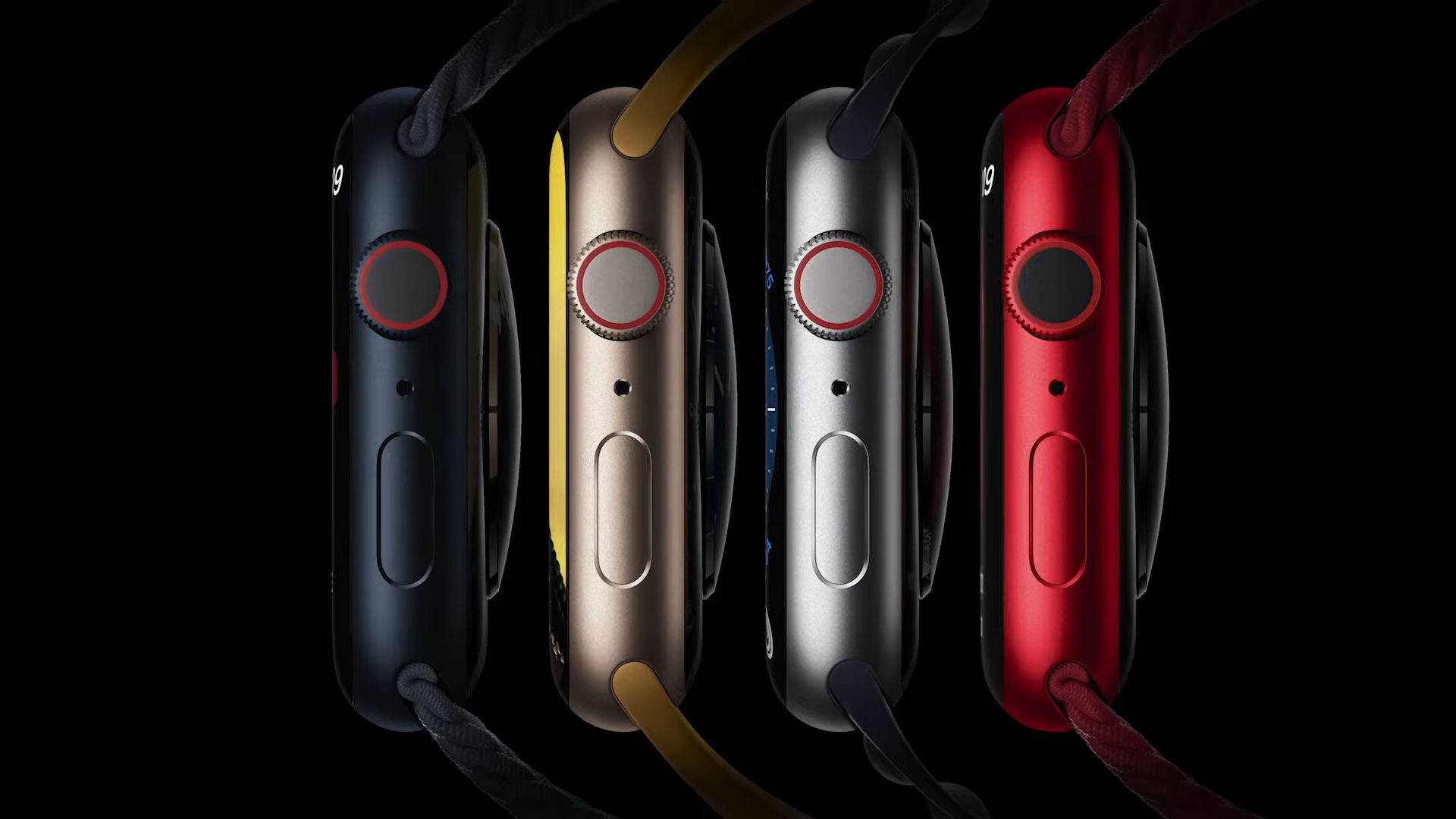 The Apple Watch Series 8 was announced at the Apple Event 2022. It comes in three stainless steel finishes — silver, gold graphite — and four new colours. It is swim-proof, dust-proof and crack-resistant.

The Apple Watch Series 8 particularly focuses on health and safety.

It comes with a temperature sensor and information about ovulation. The new temperature sensor can give a “retrospective estimate” of when wearers ovulated. The health app enables nightly shifts from baseline temperature, which might be because of alcohol, illness or jetlag. 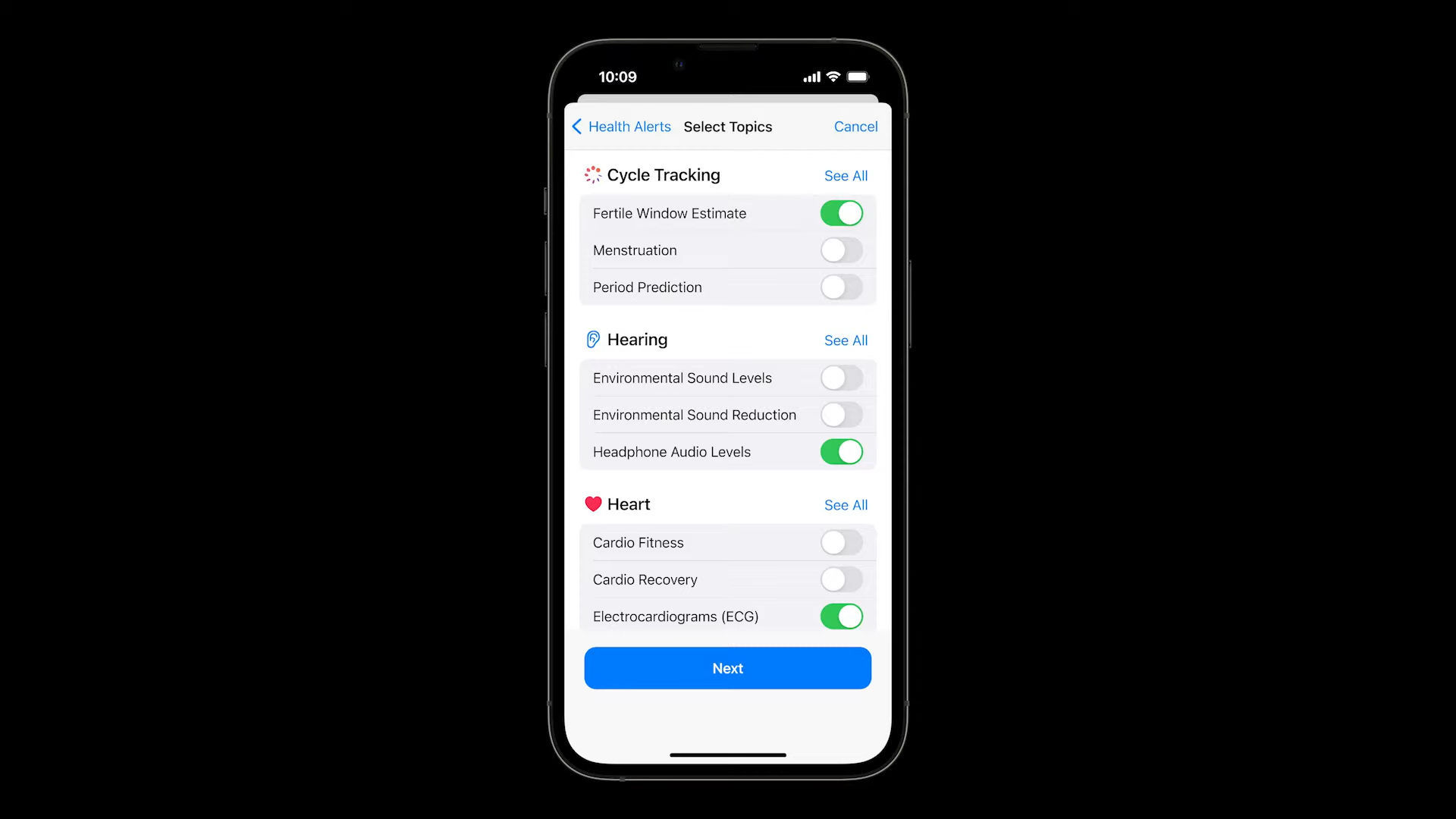 One of its most significant features is the watch’s ability to detect if the wearer is involved in a crash and then notify emergency responders accordingly.

The watch can detect four main types of crashes — front, side, rear and rollovers —  involving trucks, and passenger cars, among other vehicles. It can sense a precise moment of impact thanks to the sensor fusion algorithm built into it. Machine learning has also been incorporated into the algorithm. 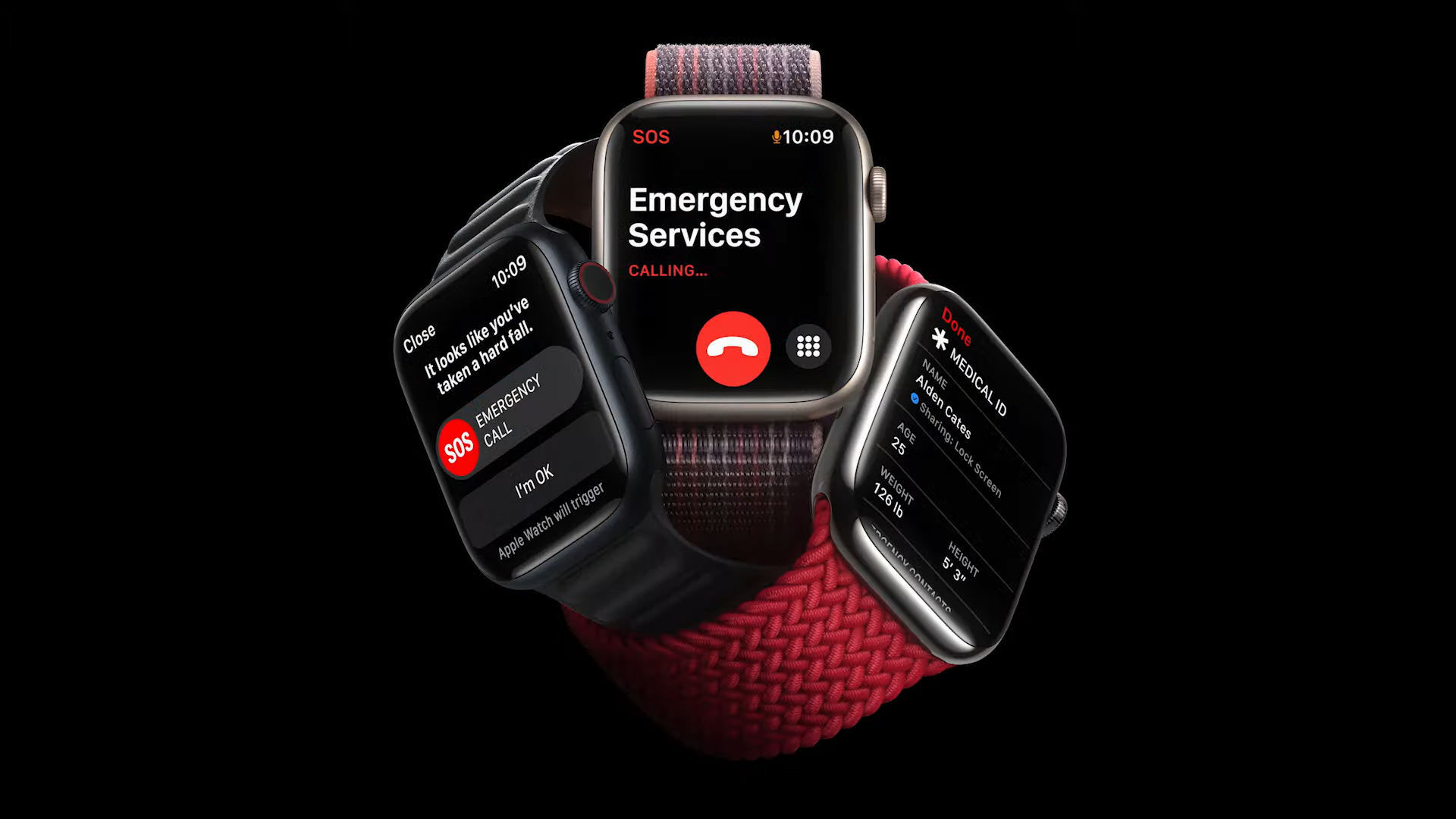 One of the biggest product announcements at Apple Event 2022 was Apple Watch Ultra. 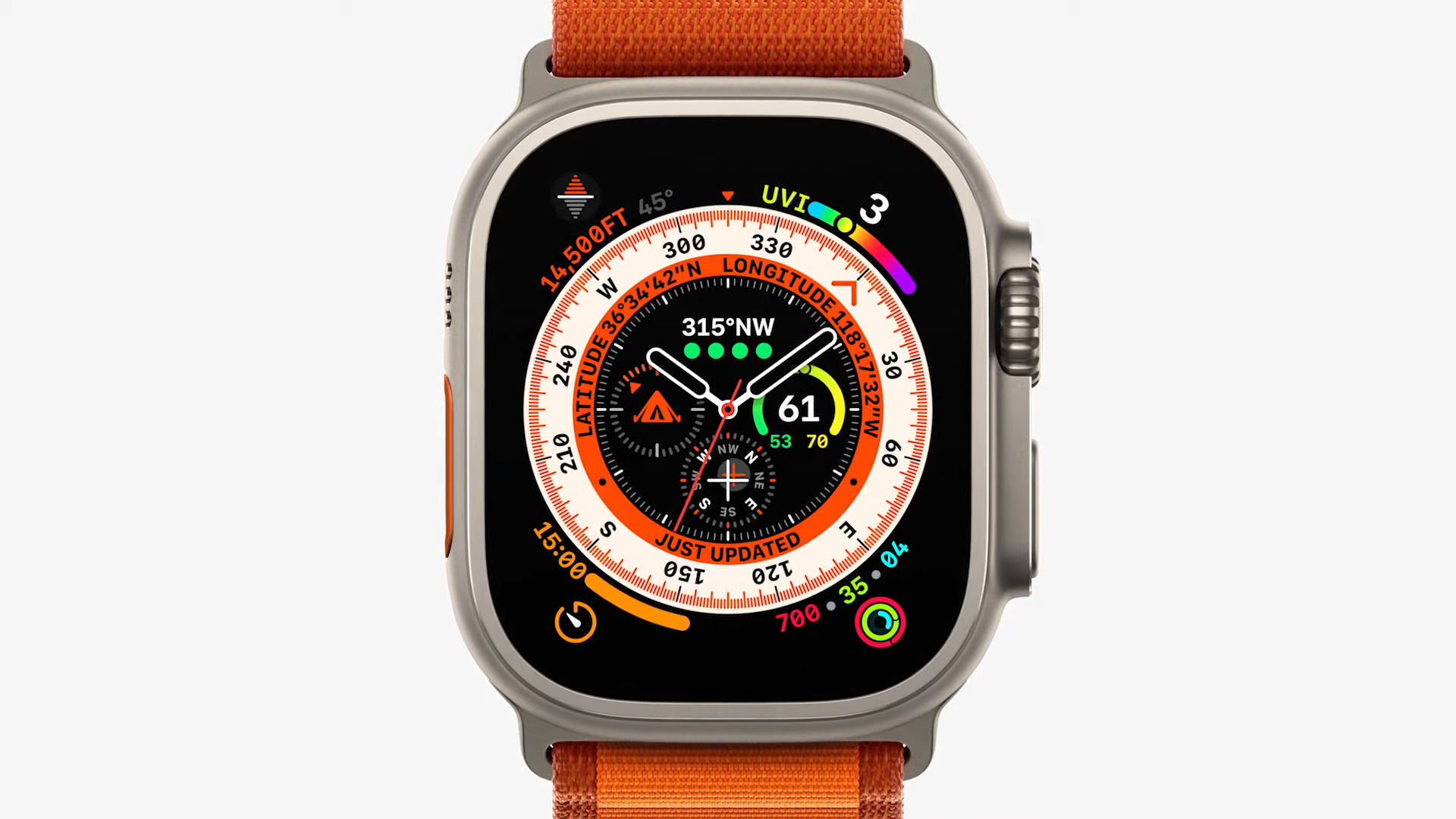 The Apple Watch Ultra is for athletes, adventurers and extreme sports lovers. It is the most “rugged and capable” watch ever, according to the company. The case is made from aerospace-grade titanium and measures 49 mm. It has the “biggest, brightest display” for any Apple watch.

There is an action button in high contrast international orange for quick access to functions. It is designed in a way that it can be used while wearing gloves. The watch has three microphones and a speaker.

The watch works 36 hours on a single charge and can go up to 60 hrs, making it always usable for those who are into endurance activities.

Its technical face is called Wayfinder. The compass in the dial can be customised for mountain exploration, walking trails, or ocean diving. The UI can be turned into a red display for easier night visibility. 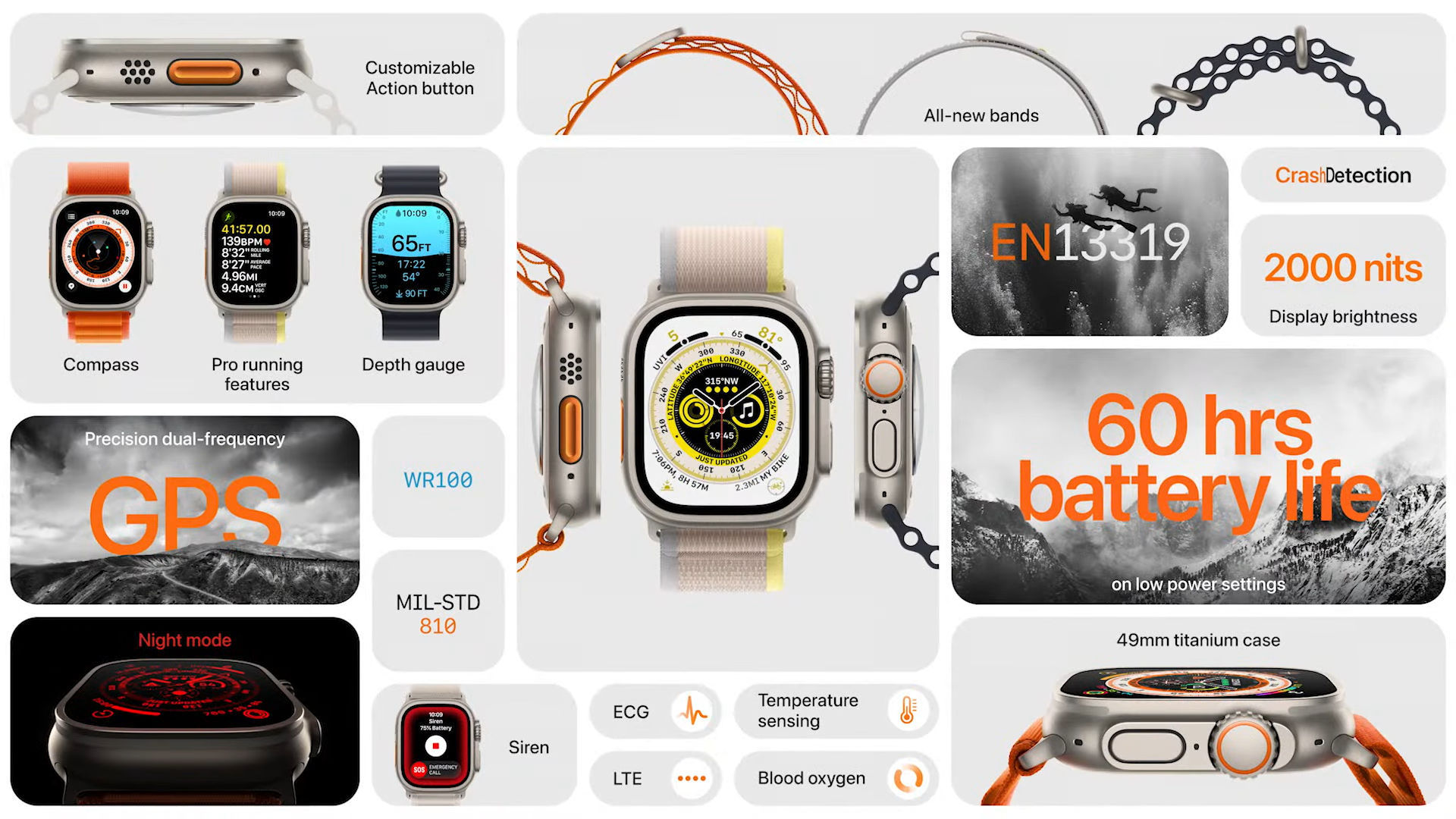 One of its most unique features is its ability to emit a specific sound, which is set to alert rescuers and bring them to the location of the wearer in case of an emergency. In a video during the event, Apple showed how the watch’s sound feature can particularly be of help for trekkers who get lost or stuck in mountains.

The Apple Watch Ultra comes with three special bands — Alpine Loop, Ocean Band and Trail Loop, the third of which is the thinnest band created by Apple yet.