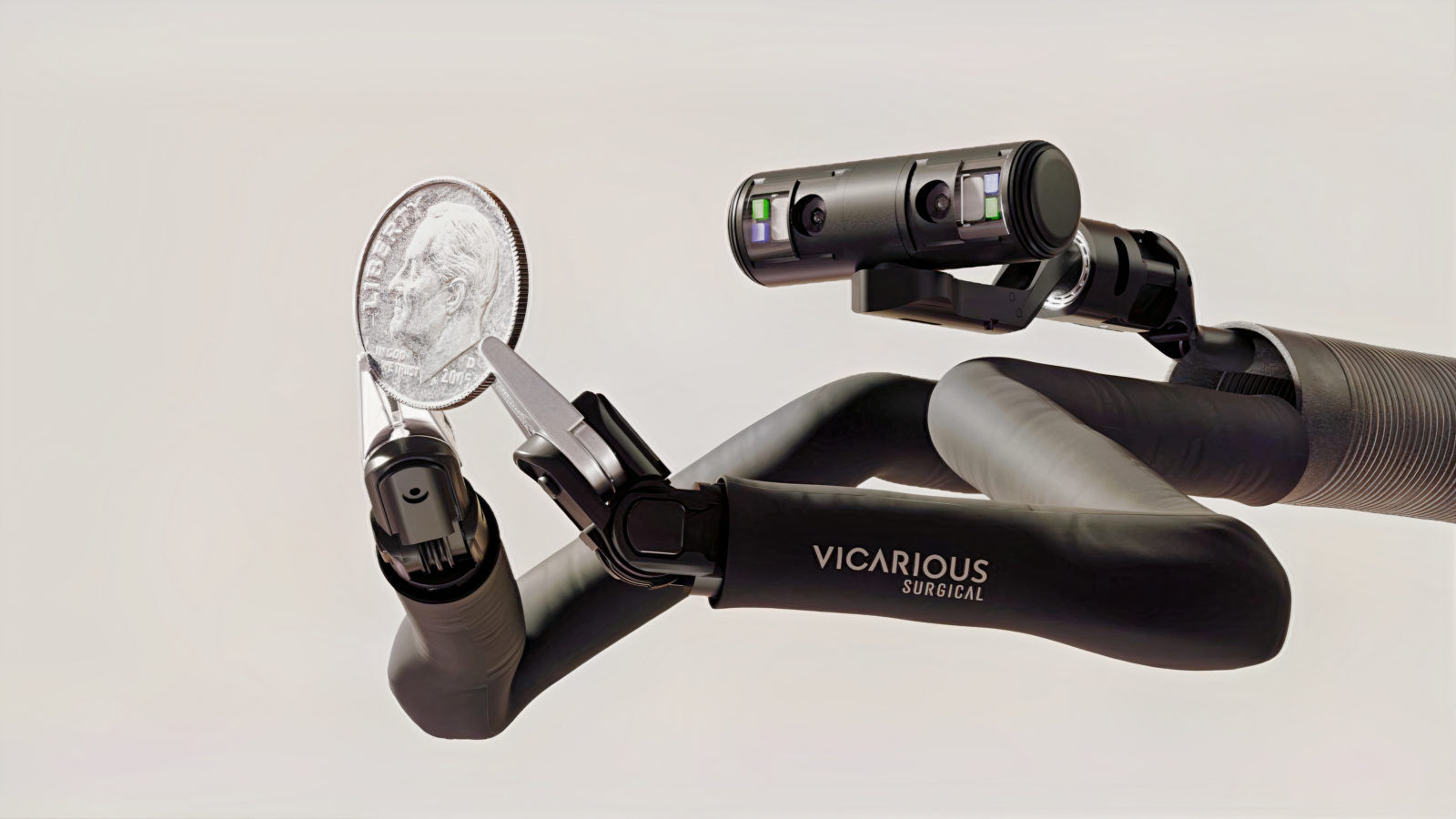 In a city with one of the world’s most advanced healthcare systems, performing routine medical procedures can still be disproportionately time-consuming. Philip Liang of Vicarious Surgical tells us about a sci-fi-inspired invention that could change perceptions of abdominal surgery.

There was a time, back in the mid-1960s, when scientists could shrink themselves to microscopic sizes and use guns to fight germs. Well, not exactly – it was actually the premise behind the sci-fi film Fantastic Voyage. And while having Raquel Welch strut down one’s arteries is a beautiful fantasy that will never come true, the possibility of an effectively shrunk medical professional visiting one’s abdomen is nearer than many of us expect.

In fact, the movie inspired Adam Sachs, Sammy Khalifa and Dr Barry Greene to found Vicarious Surgical (VS), a robotics company that aims to reinvent the way in which surgery is performed and, with it, transform the perception of robotic surgery altogether. Some seven years ago, VS began developing a technology that would eliminate the need for multiple incision sites to perform abdominal surgery to repair the ventral hernia. To help me understand the magnitude of VS’s revolutionary invention, Hong Kong-based MIT graduate and Vicarious Surgical board director Philip Liang walks us through the brief history of surgery that informed the invention.

“Why do we need robotic surgery?” Liang says. “It boils down to the very basics: our hands are fixed
in size and our bodies are generally fixed size. No matter how much you weigh, your heart and organs are generally the same size. So, generally, when it comes to surgery, you’re attempting to do things that are incredibly small and detailed.”

“So, let’s go back to early surgery, which generally was just amputation. It wasn’t a game of precision, it was about speed, because we had no anaesthesia. Only after we invented anaesthesia did it became about precision.”

In the 1990s, the invention of the Da Vinci medical robot marked a pivotal breakthrough that effectively dethroned keyhole surgery as the technique of choice in any abdominal procedure. “Da Vinci is the predominant robot on the market today,” says Liang, “And that’s what you’re going to find most doctors using.”

An avid science investor, Liang has helped multiple medtech start-ups achieve their full potential. Aside from VS, his corporate portfolio has included names such as Caeli Vascular, Frankie Health and Auris Health; the latter was responsible for developing a robot to treat lung cancer – “it will go down to your lungs and microwave out your tumours,” he says.

He describes his medtech journey as “engineered serendipity”. “We were always deep science investors – and the more we looked at the field, the more we said, ‘Look, this can be truly disruptive.’ The barrier to entry is very high, because it’s expensive. It costs hundreds of millions. But we said, ‘OK, whoever could crack it, it’s one of these cases where you can build a huge business, make some money, but at the same time, help people.”

The Vicarious Surgical System (VSS) is a surgical robot with two arms, each of which is connected to a claw with decoupled motion joints. The device boasts an impressive motion range of nine degrees of freedom, surpassing its predecessors by at least two degrees.

“Well,” says Liang, “it turns out that if you take your arms and you move them around, you’re [at] nine [degrees]. You’ve got your shoulders, elbows, wrists, hands and fingers. And if you want to be able to simulate that degree of motion inside of a body, nine degrees is generally a good number to have.” Moreover, VSS requires an incision of just 1.5cm to operate, as opposed to the 2.5cm incision required by the Da Vinci robot or the multiple 1-1.5cm incisions needed for a successful laparoscopy. Says Liang, “If you go to 2.5cm and above, you’re going to create a hernia to fix the hernia, which isn’t good.”

Normally, the relationship between the size of any mechanical device and its degrees of freedom is exponential. In other words, the greater the machine’s range of motion, the bigger it gets. Hence, the question that begs an answer is how VS managed to achieve the fullest range of motion ever seen in an abdominal-surgery robot while also utilising the smallest incision possible.

The answer lies in innovative mechanisms known as “decoupled actuators”, which grant the robot’s joints the kind of mobility similar to a surgeon. Thanks to them, the robot can operate in virtually any direction inside the patient’s body. The idea of using the actuators in VSS came to “born roboticist” Adam Sachs, Vicarious Surgical’s co-founder and CEO. “His father’s a very famous mechanical engineering professor at MIT,” says Liang. “I think he grew up thinking about these problems.”

For at least a couple of decades, surgeons have been using single cameras of various qualities to visualise the organs and tissues they’ve been operating on. These allowed for a single view of the surgical site, which was entirely dependent on the device’s location. VS’s innovation lies in leveraging virtual reality to offer the surgeon a 360-degree view in 3D.

“One of the big issues is that when you’re operating on someone, you’re effectively shrinking everything – your hands, your arms,” says Liang. “And the reason why VR works with this is that it allows us to turn ahead and look and see. Traditionally, you’d be using a controller and having a camera, and it’s very disorienting. So when you’re doing sutures, you’re doing something more or less like knitting. And it’s much easier if you’re able to move forward and backwards.”

VSS can be used either with a VR headset or a screen, depending on the surgeon’s preference. Liang also makes a point about the doctor’s comfort when working on a DaVinci robot console, “and it’s generally not very comfortable to be sitting for five hours. The last thing you want is your surgeon thinking about his back pain while he’s working.”

Implementation of novel technologies always entails an incubation period, when professionals train, adapt and get used to the new equipment. No matter how intuitive a system may be, it may still require hours of learnings before it can be used on a patient. “We’ve got a whole training programme in place,” says Liang. “And thanks
to the fact it uses VR, you can imagine the possibilities of basically just getting into your headset at home and practising the surgery before you have to do it. Is there a learning curve? Absolutely. If anything, we’ve got to get the training for the whole thing. It has to be built properly, which is partially the reason why we decided to become a public company. And, if you’re going to spend a lot of time training on a machine, you want to [be sure that] this company is going to be around.”

Another transformative aspect of VSS will be in the time taken to perform procedures. “A complex hernia repair can take four hours, five hours,” says Liang. “Using one of our robots is going to significantly reduce that time. So you’ve got the case where a doctor can do the same procedure with same patient outcome, if not better, but with a seriously reduced amount of time.”

When it comes to the adoption of novel medical equipment, Hong Kong can be considered something
of a trailblazer. According to one report, the medical- equipment market share in Hong Kong has grown by 6.1 per cent in the past year, one of the highest rates in the world. To have a clearer understanding of these numbers, Queen Mary’s Hospital has eight Da Vinci robots on one of its floors. In comparison, the entire city of Adelaide has just three.

Liang is optimistic that VSS will be welcomed by Hong Kong hospitals with open arms, “Hong Kong has one
of the best adoption rates in robotics,” he says. “Weirdly enough, it’s always been a pioneer in surgery. We’ve had some famous surgeons here who do complex surgeries all the time. They don’t talk about it. Queen Mary’s Hospital is doing a few transplants a day – it’s an everyday thing.”

“You can get CAR T immunotherapy treatments, things which you wouldn’t even find anywhere else in the world. In terms of quality of care here, you’re looking at one of the best systems in the world – and especially since you don’t need to pay for it. It’s absolutely incredible. And I think that’s something people don’t discuss enough.”