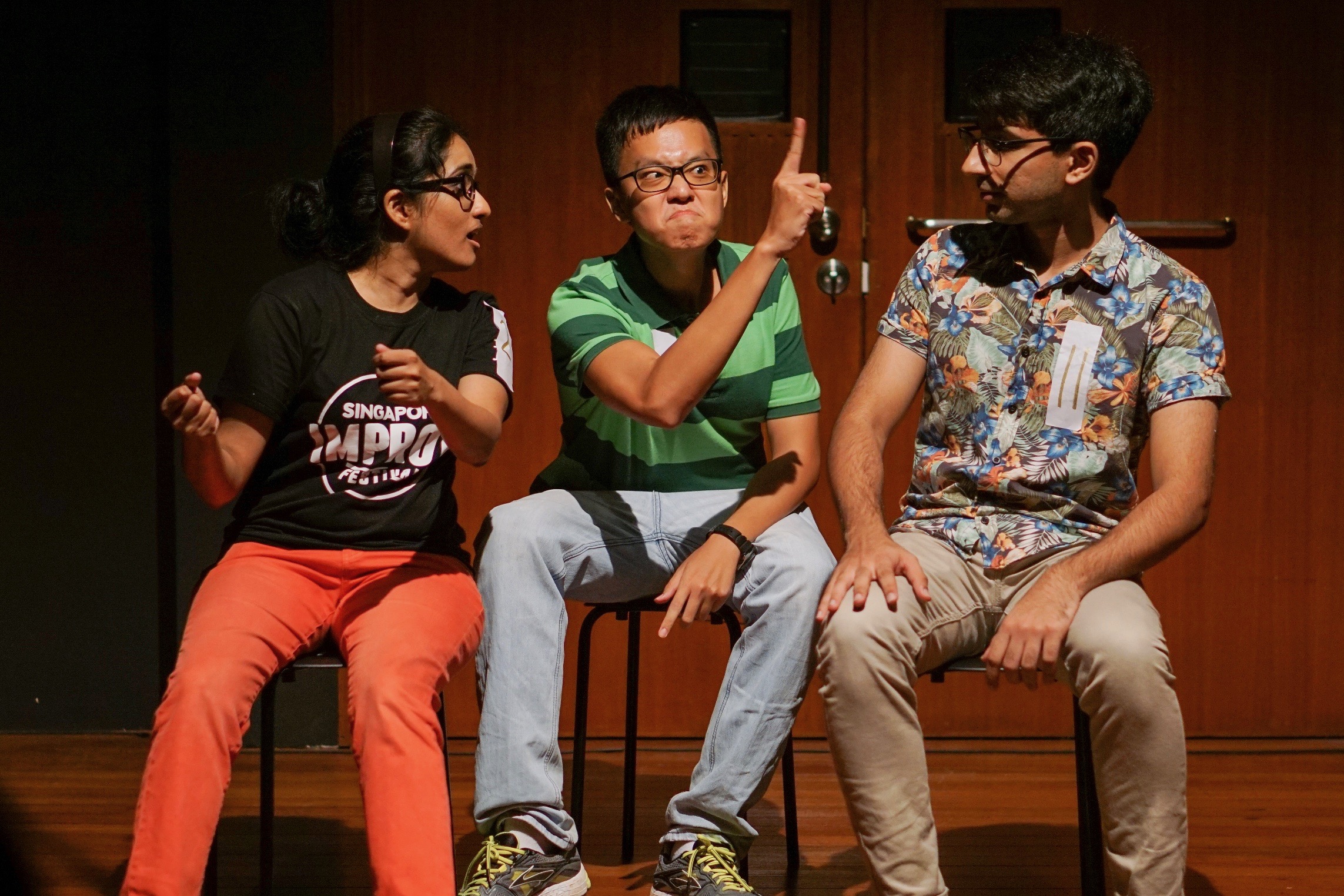 On Improv, Comedian’s Block and the Singapore Improv Festival

Pursuits
On Improv, Comedian’s Block and the Singapore Improv Festival
Share
Next article

Like a good laugh? The Singapore Improv Festival is back a second round, and this time, you’ll get to catch very funny people from all around – namely Singapore, the Philippines, Hong Kong, China, South Korea and Germany. It’s going to be great, but if you’re not sure if you’ll like it, Kim Tan, the festival director and co-founder of The Improv Company, is here to prove you wrong.

It’s awesome fun! Improv is like a puzzle that rearranges itself in front of your eyes and you got to solve it together as a team. I enjoy the challenge. It can help other areas in your life too. Our students and teams have said how they’ve become more adaptable, creative and resilient.

What makes it better than stand-up?

There’s definitely space for both. Stand-up is scripted, refined offstage and usually done alone, whereas improv is built on spontaneity and usually done in teams. I’ve stayed with improv because you’re not really bound by the limitations of your stage. If the audience suggests something like ‘kopi uncle who stages a bank heist in space’, you must commit to that character 100%. But that’s the joy. Plus, you never see the same show twice.

Is it for everyone?

Absolutely. Off the top of my head, people who have dropped in include PhD geneticists, retirees, investment bankers, playwrights, marketing managers and students. Gregarious people, shy people, anyone in-between. Come by for our fortnightly taster sessions, Improv for Everyone.

Name us your favourite comedian and tell us why.

I’d go with Stephen Colbert – great improv chops, always has a message and also uses his skills to speak truth to power.

How difficult is it to make it as a comedian in Singapore?

Comedy is definitely a big part of improv, but I’d consider us storytellers above all, with humour as a by-product. On a personal level, my co-founder Hazel and I have had to learn a lot along the way. Like finding a space, figuring out a growth plan, and how to pay the bills. I’m sure these are things that Singapore’s actors, artists, and producers can relate to too. It’s been a steep learning curve but we’re proud to have trained hundreds of people and produced dozens of shows. We’re definitely still learning, and are excited to take it to the next level with the festival.

How tough is the audience here?

Audiences are great here. Getting them through the door is actually the hardest part. Not many people might know improv exists in Singapore (yet). But once they do, they’re very supportive. People who are watching improv for the first time are usually blown away and ask me if it’s scripted (and for the record, never!)

How do you get over a comedian’s block… on stage?

Great question. I always tell students to don’t try and be funny, full stop. Instead, look for the truth of the scene. Commit to where the story is going, trust your team to lift you up, and humour naturally follows.

Being funny can be difficult. Why so?

You’ve hit the nail on the head – it’s the sense of fear. One of the principles we encourage people to embrace in improv is ‘failing gloriously’. Sometimes a scene or story has to fall flat so you can learn what didn’t work. But that’s okay, because you try differently the next time.

How has the shape of comedy evolved in Singapore?

Comedy is such a broad term, so I wouldn’t profess to speak for the whole scene. But generally, we are seeing a lot more improv, stand-up and sketch comedy these past few years. It’s getting more mainstream, which is encouraging.

What three improv skills can help us get ahead at work?

The three basic improv principles that we teach – “Yes, and…”, “embrace failure” and “make your partner look good” – probably apply. But if I had to pick one, I’d say, “Yes, and…” Because it means acknowledging what is true in a situation, then finding a way to progress it with a collaborative attitude.

Who must we catch at the upcoming improv festival?

Ah, that’s like asking me to pick my favourite child! but I’d particularly recommend the Saturday night show, Pinky Rings Up to The Moon at 7pm and the Sunday night show, Is This The Real Life? at 7pm. The regional teams from Manila, Beijing, Australia, and big local favourites are on then, so definitely swing by.