By Editorial
Presented by Giorgio Armani 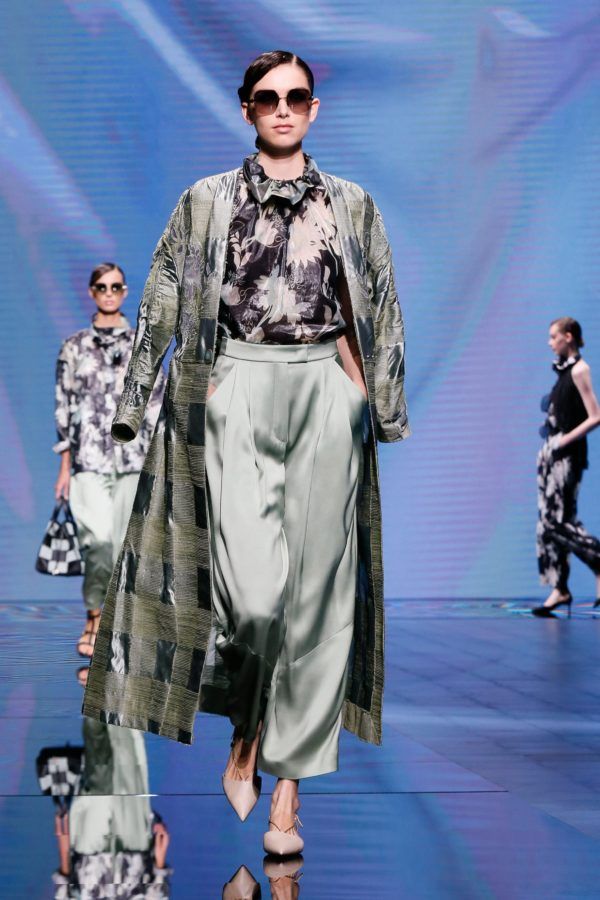 Giorgio Armani proved the show must go on — in spectacular style — with a virtual Spring/Summer 2021 presentation that provided a fresh interpretation of the brand’s timelessly elegant aesthetic.

Whatever the circumstances, some things remain eternal – as Giorgio Armani’s Spring/Summer 2021 collection amply demonstrated. The collection, which was presented virtually under the title Timeless Thoughts, showcased the latest iteration of the storied Italian fashion house’s signature aesthetic. Featuring soft textures, fluid lines and a sophisticated colour palette combined with eye catching geometric patterns, it blended the traditional and structured with the unexpected and daring to head-turning effect.

The women’s collection presented a series of fluid silhouettes in soft fabrics, favouring the kind of neutral colours that are traditionally at the heart of the brand’s palette, such as grey, beige and black, but with regular pops of sea and baby blue and silver, as well as some heavier tones and regular use of abstract patterns. Pieces elegantly combined the simple with the sophisticated, including soft suits, patchwork jackets, silk trousers and loose dresses, alongside minimal accessories – mainly, a small number of sleek, svelte clutches.

For men, the look was similarly approachable and comfortable but sophisticated and classic. The emphasis was on suits in soft materials, with the focus again on classic shades of grey and blue, often featuring intricate patterns expressed in subtle colour combinations. Several casual three piece suits come with a vest that served in lieu of a shirt, while accessories were typically in suede, including bags and tasseled loafers.

The presentation of the show took the form of a video, the second time Armani has presented a seasonal show virtually, after it became the first fashion house to take action as a result of the pandemic back in February, when it moved its Autumn/Winter 2020 show behind closed doors. The maison’s Spring/Summer 2021 show also marked a couple of firsts: It was broadcast on Italian national television during prime time, as well as being streamed online; and was preceded by a 20 minute documentary detailing the history of Armani, also called Timeless Thoughts.

Narrated by much loved Italian actor Pierfrancesco Favino, the film detailed the evolution of the brand over the ages, highlighting in particular its consistency – a commitment to a certain interpretation of elegance, based around a perfect balance of innovation and restraint, and of the urban and the exotic, that again received a dazzling expression in its most recent men’s and women’s collections.