WHOOSH! Casey Cadwallader on His Vision for Mugler 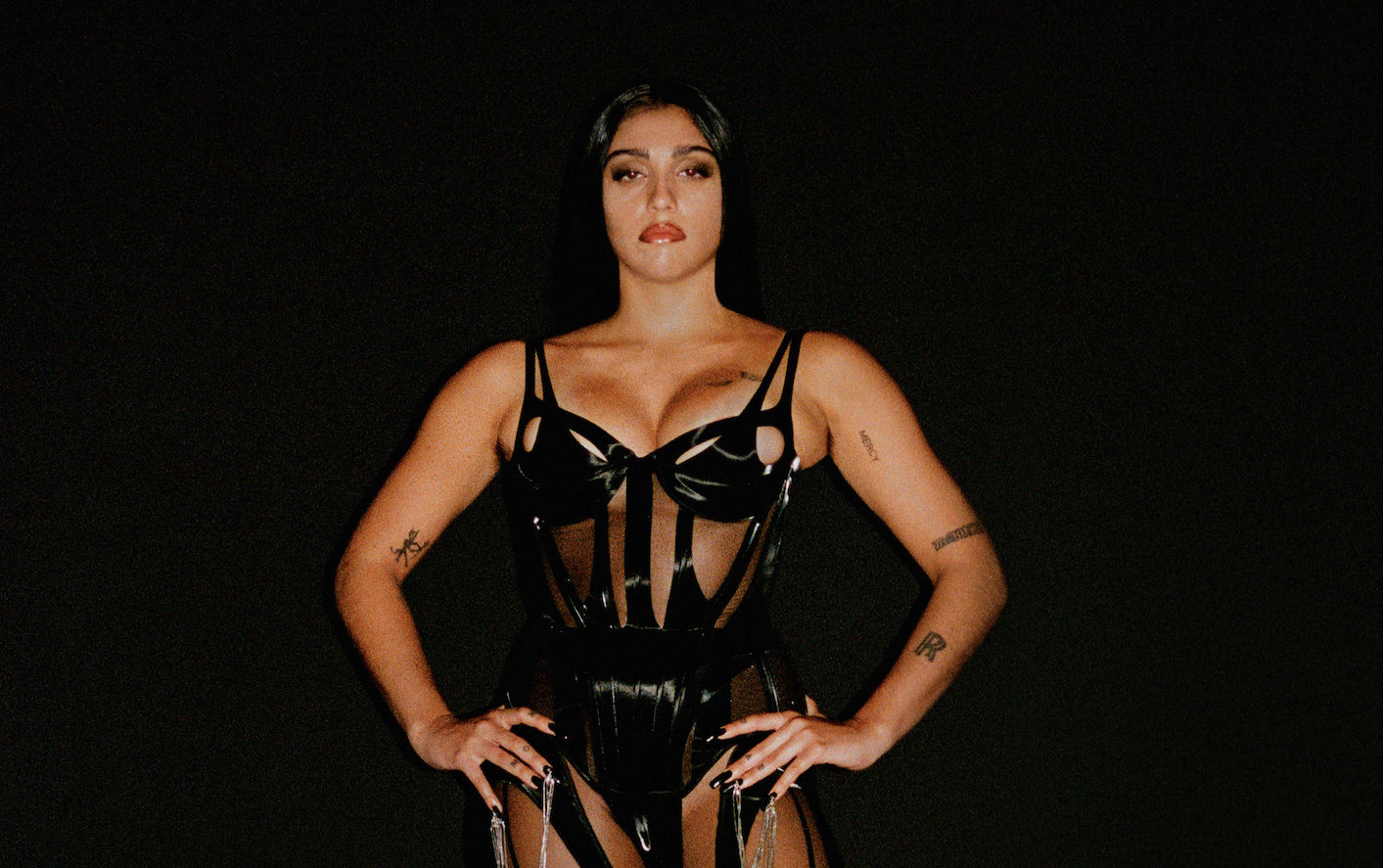 Style
WHOOSH! Casey Cadwallader on His Vision for Mugler
Share
Next article

Designer Casey Cadwallader tells us how architecture helps shape the kinetic core of his latest collection for Mugler — and how he constructs the perfect corset.

I remember watching – I think I was aged about 12 at the time – a TV rerun of Indecent Proposal. Brushing aside whether the erotic drama was suitable material for a pubescent boy, what sticks in my mind is Demi Moore – or, to be more accurate, her sleek black dress with bust cut-outs. How a fabric could be made to do that was a question that bugged me far more than the pecuniary value of the proposed indecency. A couple of years later, I appropriated from my aunt a copy of Vogue Germany’s February 2010 issue and was transfixed by cover girl Toni Garrn, imagined through Karl Lagerfeld’s lens, wearing cyborg armour and bearing thread-thin eyebrows. She was a hybrid of Gloria Swanson, Joan of Arc and Chris Claremont’s Goblin Queen.

Aside from two formidable women seemingly liberated in their sexualities, it didn’t occur to me that these pop-cultural moments had anything in common. It eventually transpired, however, there was a link after all: the French designer extraordinaire Manfred Thierry Mugler, who died early this year.

Founded in the early 1970s, the house of Mugler quickly became synonymous with unapologetic sex appeal and “extreme sophistication”, as Mugler would then say. His shows ventured to the farthest reaches of extravagance – by the ’90s, the thinnest, tallest, most fabulous people from all walks of life strutted down catwalks to sultry “Mugler” whispers and a steady beat. Socialites, drag queens, adult film stars, supermodels and even Ivana Trump were cast into metal, leather and latex of varying magnitudes of ingenuity. They were all in one room, interacting, laughing, screaming at one another, and all while attesting to the designer’s gift of celebrating differences. Lest we forget, this was before the word “diversity” had made its way into every PR’s lexicon.

Almost immediately after Mugler’s death, Demi Moore posted three throwback pictures on Instagram, proclaiming: “THE dress – it was an honour to wear one of Thierry Mugler’s iconic designs.” Kim Kardashian also took her Insta-adoration to Muglerian heights: “Your vision, your transformations, your magic. There was so much we had planned to do together, but you already gave us so much. You always said beauty will save the world.” In 2019, Kardashian was among the women who led a resurgent interest in Mugler’s archives with the custom “wet” dress she wore to the Met Gala – one that hadn’t previously been worn and didn’t require losing 7.3kg in the span of three weeks so she could squeeze into it.

That heritage – of transforming women into creatures and artworks, while spotlighting their beauty – has been proudly upheld by the founder’s successors, Nicola Formichetti, David Koma and, most recently, the American designer Casey Cadwallader, who’s now responsible for reigniting the Mugler flame.

That’s no small aspiration for a designer whose earlier inclinations were for cars and jewellery rather than fashion. “I started wanting to be a jeweller,” says Cadwallader. “but at the same time, I’d always wanted to be a car designer” – and even those interests were swiftly overshadowed by architecture. “My father worked in architectural material sales, he had sets of blueprints in the house and was constantly marking them.” Inspired by the sketches scattered around his childhood home, Cadwallader applied to Cornell.

But the prospect of becoming an architect and a potential “CAD slave” quickly paled. Frustrated, Cadwallader petitioned Cornell’s Textile and Apparel Design Department’s to participate in one of its shows. “You had to make all your patterns and sew every stitch. I had no idea how to do any of those things, and I did it intuitively. I made 3D [avatars] of my models, so I could work on their exact bodies in my apartment overnight,” he recalls. Not that the hours fazed him. “Cornell architecture school is notoriously tough and people don’t sleep. I put a lot of needles through my finger at four in the morning.” And his designs? “I did this very ‘bricolage’ thing – it was all about moulding the body in different kinds of tape and then cutting it apart and adding zippers.”

Young Cadwallader’s performance at the student show led him to Marc Jacobs, where he was offered an internship after helping out backstage one summer. “Marc needed more people right before the show. They invited me to come. Once I saw what I had access to inside the industry, I was stunned by it. I was on the floor at 3am, cutting metal sequins off seams so they could put together a dress for the show the next day. I loved that energy.”

And brands loved it back. Following the Marc Jacobs baptism, job offers followed. “I almost got two in the same day,” he says. “One was for the architect Richard Gluckman, who did Helmut Lang and Versace stores, and I got a job to work at a cashmere label [TSE], with the former head of ready-to-wear from Marc Jacobs.” Cadwallader went cashmere and his career matched fashion’s fast-forwarding seasons, as he leveraged his success from TSE, Narciso Rodriguez and Loewe, to J.Mendel and Acne Studios, before taking the helm at Mugler as creative director.

Cadwallader stamped his imprimatur on Mugler from the outset. His first collection evoked a diverse cast in the best traditions of Manfred Thierry himself, by pushing the original frontier even further with plus-size models, and industrial-design- and architecturally informed garment construction, marking the brand’s foray into the new age of fashion.

In an interview with David Koma, Mugler’s creative director from 2013 to 2017, the designer told me how his obsessive studies of anatomy in Fine Arts school gave him the ability to “reveal the female body intelligently”. Or perhaps too academically. Whereas Koma was inside-out, Cadwallader’s design philosophy was outside- in and informed by the external. “The idea that you have the skin you’re in and your clothing is the next skin, and then furniture is the next [one], and then the walls and the city are the next,” says Cadwallader. “I can collapse them in a way that makes them all the same. It’s a ‘designed interaction’ with your body.”

Now that steel and whalebone have dissolved into oblivion (only to emerge once every first Monday in May at the Met), corsets are no longer metaphors for captivity and the patriarchal. Witness Cadwallader’s design process.

“Mugler is a laboratory where we try to find new ways of making things, and new materials to make things out of,” he says. “We use laser-cutting and bonding, which embeds the boning inside the garment without stitches. This makes it effective for body shaping and is comfortable, functional and easy to wear.” Such methods inform a direction that blends couture with sport. “It’s for people on concert tours, their performances at award shows and music videos. That makes things so exciting right now, which inspires me the most.”

For his latest collection, Cadwallader deconstructs suits, tops, dresses and pretty much anything he can get his hands on, only to rebuild them into shapes that defy the physical. There are Lycra bodysuits styled with tiny skirts, a bandeau top that bleeds into a glove, and golden body chains that could make the costumes in Denis Villeneuve movies pale in comparison. “The inspiration comes in two parts,” says Cadwallader. “One is about continuing what’s become for me the Mugler wardrobe, a mixture of denim, Lycra and illusion pieces, then bringing them forward and adding new technologies and cuts.”

“The second is the newness of the season. In this case, I was looking for fluidity,” he says, dressing the thought further. “I love the tops that are gloves, that have scarves attached to them, that are dresses that tie on the side and all of these things have long pieces of fabric that follow someone as they walk and add a whoosh to the look. It was brought most forward in the leather pieces with long scarves that almost reach the floor, and can either be worn in the front or on the shoulder. And the kinetic pieces are the snake chains that are draped around the body.”

Suffused with Cadwallader’s aesthetic alchemy, today’s house of Mugler appears to be in unapologetically sophisticated hands.