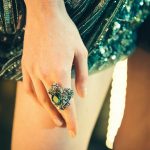 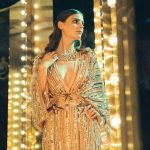 Hours before the big bash at a location that had been kept secret, a small group of members of the press was treated to a guided tour of the world-famous Opéra Garnier (also known as Palais Garnier), just a few minutes’ walk from the Chaumet headquarters at 12 Place Vendôme. This private visit to the renowned opera house turned out to be a clue to the musical inspiration that lies behind the magnificent high-jewellery collection.

The tour involved walk-throughs of the magnificent Grand Foyer and Auditorium, as well as a spine-chilling session in a secret basement passage where we were told the story of The Phantom of the Opera (parts of the novel are thought to be inspired by events that took place at Opéra Garnier during the 19th century). Later that evening, Chaumet’s Paris-themed soirée took place at the Musée des Arts Forains, a private museum housing funfair objects that’s located in the city’s 12th arrondissement.

Within the venue, Chaumet CEO Jean-Marc Mansvelt and guests including celebrities
and media representatives watched as models dressed to the nines in dazzling designer gowns displayed the one-of-a-kind pieces from the collection. In between, guests sipped cocktails and played carnival games. Unfortunately, the prizes weren’t sparklers from Chaumet, but the little Parisian treasures we received still put smiles on our faces.

The two-day extravaganza culminated with a viewing of the creations at Chaumet’s remarkable Place Vendôme salon. Among our favourite pieces were the stunning Pastorale Anglaise ring (the pattern references a tartan motif – admittedly not English, but we’ll let it pass) and the Aria Passionata, a transformable necklace set with garnets, rubies, onyx and brilliant-cut diamonds (the back part of the necklace can be detached and worn as a brooch).

Before leaving the room, we came across one more darling, the Valses d’Hiver diadem, an awe-inspiring crown featuring diamonds and an array of South Sea and Akoya pearls. We’ll take them all.

Jewellery Chaumet
Sheena Khemaney
Sign up to get the latest luxury and lifestyle news delivered to your inbox.