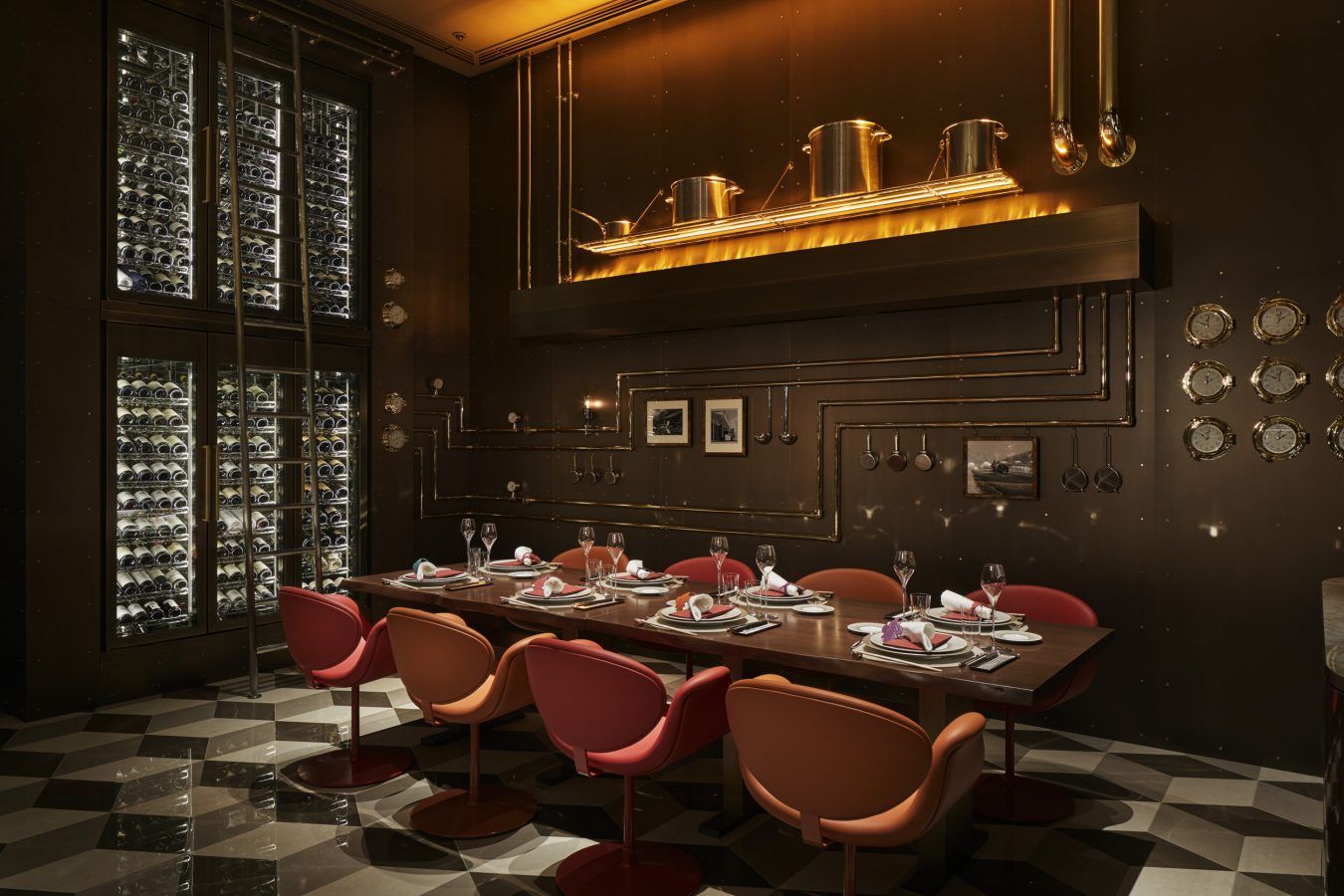 Style
Fashion Plates: How Luxury Brands Open Restaurants All Over the World
Share
Next article

Gennady Oreshkin enters an elevated culinary world of fashion restaurants, where he soon finds himself in an indulgent spiral

As luxury purveyors of the lifestyle universe have rushed to diversify by opening cafes and restaurants around the world, consider the case of Christian Dior and his tome, La Cuisine Cousu-Main (1972). A high-fashion cookbook first conceived in the 1930s when Dior holidayed in the South of France, it was illustrated by the textile impresario himself with help from Italian fashion illustrator René Gruau (whose signature drawing style still inspires designers far and wide). This Holy Grail of fashion cuisine features the prolific couturier’s favourite poached eggs fürstenberg, red-mullet escabeche, and chocolate pompadour with crème Anglais. “If cooking is to be considered intelligent work, then one’s hands must act as dedicated performers,” instructs the chef Raymond Thulier quoting Dior in the book’s preface. So what better way for the House of Dior to honour its founder’s appreciation for good food on the 50th anniversary of the book’s publication, than by offering the maison’s top-spenders a taste of La Cuisine Cousu-Main’s delicacies?

Fashion and its enduring ties to food have been sung, written and gossiped about for centuries. Marie Antoinette’s appetite for sweetmeats was matched only by her alleged fervid fascination with diamonds – or at least according to Alexandre Dumas’ The Queen’s Necklace. During last two decades, however, luxury purveyors have put their money where their mouth is by opening own-brand emporiums of esculents, from Los Angeles to Tokyo, serving high artistry in plates and glasses.

If embarking on a journey to visit such temples of indulgence fashioned by the creative minds that rule the luxury realm, the starting point must be Tokyo – and, assuming one happens to possess a time machine, the preferred year to drop by would be 2004. Nearly 20 years ago, when the cast-iron shackles of social media were merely shabby plastic zip-ties, fashion brands weren’t all that interested in expanding beyond their then-narrow areas of expertise. Boutiques didn’t have an existential need to compete for traffic with cyber real estate. Yet, there was one fashion giant whose precognitive vision led it to prove itself once again as luxury’s chief innovator: Chanel. The restaurant Beige Alain Ducasse Tokyo, established that same year through an artistic collaboration between the fashion house and Ducasse Paris, sits on the 10th floor of the Chanel Ginza Building, its partial raison d’être being to encourage clients to spend more time in the building. In 2018, however, the freshly renovated Beige became a way for Chanel to offer its top clientele a new facet of retail – think of it as a predecessor of the maison’s soon-to-open private boutiques for ultra-elite patrons, where the top 1 per cent of the 1 percenters are entertained.

Today, Beige is helmed by Kei Kojima, Ducasse’s former right hand of more than a decade, whose extensive training in French haute cuisine and Japanese heritage make him the only person imaginable to head Chanel’s culinary outpost in the Land of the Rising Sun. We’re told Kojima sources the vegetables himself from the fields of Kamakura, where he can sense the passing of time – don’t forget the ancient Japanese calendar is divided into 24 mini-seasons – and reflect on the seasonality-centred philosophy Ducasse swears by. “As in a fashion collection, in cuisine too the sense of the seasons is very important,” says the French chef.

The restaurant is as sophisticated as Coco Chanel’s favourite colour, hence the name. “This is the French contemporary restaurant in Tokyo, a package of design, atmosphere, harmony, savoir-faire, refinement and French taste. It was two years of hard work and brainstorming and a reduction of all the essentials of top French gastronomy. It’s the right restaurant for this moment. It has to be like this, just for Tokyo. It’s one restaurant, one spirit, one philosophy, unique,” was how Ducasse described it in a 2007 interview with Prestige.

The terrace, which boasts the coquettish name Le Jardin de Tweed, is unsurprisingly a love letter to the material so adored by the brand’s founder. Naturally, the fashion giant could only trust the person who designed all its boutiques, Peter Marino, to conceive the restaurant – and the entire building with it.

Two other renowned creations of the American architect – Le Cafe V and Sugalabo V – can be found in Osaka, both belonging to Louis Vuitton and run by chef Yosuke Suga, who worked for Gault Millau Chef of the Century, Joël Robuchon, for 17 years before starting his own venture. Le Cafe V is a seductive and refined yet playful space, a harmony of vivid colour and mesmerising shapes. Hanging plants, egg-shaped chairs in teal and sky-blue counter seats yield in their extravagance only to the café’s chocolatier counter. Sugalabo V, on the other hand, is what truly encapsulates the brand’s penchant for exclusivity. Hidden within Le Cafe V, it’s an invitation-only restaurant fashioned after Suga’s own intimate Tokyo space and is coated in chocolate-brown wood with brass accents, and decorated with jewel-toned seats and monochromatic rhomboid tiles. Tying the two together with the requisite LV je ne sais quoi are objects selected by Tokujin Yoshioka, creator of the brand’s travel accessories. Most recently, the maison dipped its culinary arm’s gilded fingers into that enduring jet-setters’ haunt, Saint Tropez, with Mory Sacko at Louis Vuitton, a heavenly seaside venue where African and Japanese influences meet exceptional French gastronomy in a gourmet menu that’s largely vegetable-driven.

On the opposite side of the pond, in Beverly Hills, Osteria drops the heavy-handed Italian influences in favour of California sensibilities. Referred by Gucci as “an embassy of modern Italian culinary art”, Osteria Beverly Hills is ruled by chef Mattia Agazzi, who honed his skills at the three-Michelin-star Cerea Brothers in Bergamo. Here, Osteria Florence’s green motifs are reinterpreted as industrial metal beams, adorning the terrace and potted greenery throughout the interior. There are bursts of red, of course, in the shape of velvet couches, and a touch of gold in the embroidery of the plump armchairs. Here, diners can enjoy the Beverly Hills classics, such as Cod as Milanese and Risotto Camouflaged as Pizza, as well as a beef ribeye with cotechino and salsa verde, cutely named Mini Me.

A lesser known yet no less remarkable fashionable dining establishment is Elsa’s Cocktail Bar, named after Italian couturier Elsa Schiaparelli, at gallerists Hauser & Wirth’s Fife Arms hotel near Braemar in Scotland. A prime example of art, fashion and mixology crystallising in a single space, it’s intimate, sophisticated and self-indulgent in the best sense of the words, bringing art deco and elevated surrealism into the austere Highland wilderness. The bar’s star cocktail, Shocking Pink – it’s made from dark-matter rhubarb liqueur, Aelder (wild elderberry elixir), prosecco and, curiously, a spray of Shocking Pink perfume created by the house in 1937 – is meant to serve as a visual representation of the designer’s epigram, “In difficult times, fashion is always outrageous.” Now, at long last, this writer won’t have to guzzle Shocking Pink on its own in the hopes of ingesting some of Schiaparelli’s genius.

There are many more, of course. More than mere six pages could possibly contain. There’s Tiffany’s recently opened Blue Box in Harrod’s, where the self-proclaimed Audrey Hepburns are offered an expertly devised main-character moment enshrined in jewels and Tiffany-blue velvet. We hear the buttered croissants and eggs Florentine are worth committing a felony for. In Fondazione Prada’s Torre, in Milan, visitors can treat themselves to a four-hand dinner created by chef Lorenzo Lunghi in collaboration with a young international chef – a new one each month – and all in the company of magnificent artworks by Thomas Demand, Jeff Koons, Goshka Macuga and John Wesley. Not to mention Ralph’s Coffee in Ocean Terminal and Prince’s Building, with its rich single-origin Colombian coffee and lava custard mooncakes.

It seems that quenching a thirst for couture and, simultaneously, sating a hunger for haute cuisine can be done in the comfort of a single boutique – “a glamorous life,” as Desiree Armfeldt might say. So why not let the cake crumbs christen – and Christian Dior – that brand new dress?