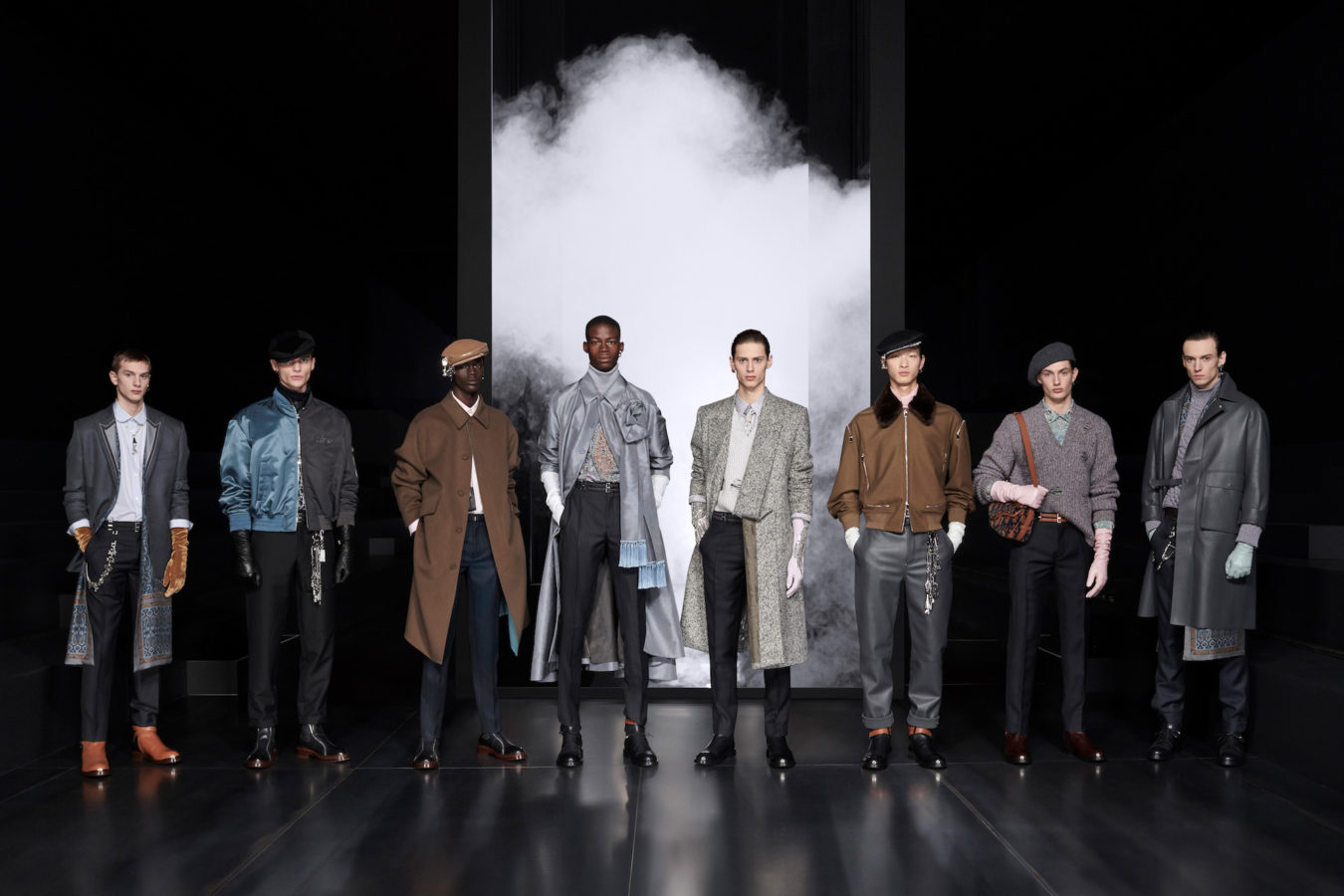 The Most Captivating Autumn/Winter 2020 Menswear Highlights

We dive into eight designers’ pre-pandemic Autumn/Winter 2020 menswear visions, and discover a refreshed outlook for the new fashion season.

Here are the most noteworthy style cues.

Alessandro Michele has been thinking about the time-honoured, predefined ideal of virile masculinity. A toxic influence that cultivates abuse, violence and sexism, this oppressive model is imposed as early as babies at birth, alluded in the blue sweater depicting a newly hatched chick with the French term of affection, mon petit (“my little” in English), on its eggshell. Models wore schoolboy uniforms complete with knickerbockers and socks worn high over shins.

This collection is Michele’s conversation about the complexity of being a modern man because the male universe is diverse. Rather than focus on long-constructed constraints, he turns to the notion of masculinity free of suffocating boundaries and explores the soft power in femininity.

The collection’s childlike whimsy brings in cutesy Peter Pan collars and girlish Liberty floral prints with witty symbolism. “And, of course, ‘liberty’ means freedom, so I decided to be a bit playful with this side,” he said, pointing out the word gracing some of the bags.

Titled I Mestieri D’Arte (“Masters of Art” in Italian), the massive 116-look collection pays tribute to family trades, conveying an appreciation for the dignity of labour and the value of traditional crafts and time-honed skills handed down through the generations. Statement tops extolling these virtues are emblazoned with the words “craftsmanship” and “handmade” in English and Italian, while some models donned literal portrayals including The Artist, The Florist and The Electrician, with props to boot.

But look closer at the silk shirts and you’ll find subtle interpretations in the prints that showcase other specialised trades such as shoemaking and tailoring. Still, it was the rustic charm of knits that stole the show. The Shepherd walked down the runway with a sleeping lamb in his arms, closing the link between origin and product.

Véronique Nichanian injects her Hermès menswear collection – coloured in a palette of sensuous, almost delicious, neutrals ranging from hazelnut, chocolate and vanilla – with a distinct free spirit using the swirly Rêve hypnotique print. More topographic than psychedelic, the motif gave just the decorative lift without compromising the elegant restraint in Nichanian’s designs expressed in fabrics both noble and technical.

It graced cotton poplin shirts and turtleneck pullovers in 180’s wool, as well as parkas and blousons (reversible in printed Toilovent, a specially developed form of waterproof nylon) with the Rêve hypnotique ribbing in rubberised lambskin.

Not one to stick to his appointed scope, Kim Jones mines the house’s haute couture archives and iconography for this autumn/winter 2020 menswear collection. A play on volume, accentuated with pleats and draping referencing couture’s skilful flou and tailoring techniques, the pieces are enriched with the enthralling moiré effects of silk, embroideries, Arabesque motifs and paisley patterns. Buttons covered in fabric are a nod to those on the iconic Bar jacket. Long tasselled scarfs are fashioned into rosettes. The Dior dandy pairs luxe opera gloves with his suits.

But there is another important thread in Jones’ story – his homage to Judy Blame. The late British designer and stylist’s iconic DIY style of transforming found objects into accessories adds a punkish edge to the elegance of the ready-to- wear and classic colour palette. Jones depicts the Dior logo pierced with a safety pinned even dedicates a blown-up rendition of the signature Toile de Jouy motif to Blame. The “Toile de Judy” is designed in collaboration with the Trust Judy Blame foundation. The tribute is also present in Yoon Ahn-designed jewellery, Stephen Jones’ zip-accented flat caps and embellished berets.

When Silvia Venturini Fendi sent her collaboration looks with Anrealage down the runway, the use of UV light was still largely confined to industrial, medical and scientific applications. Who would have thought that in just a matter of months, it would be a household essential, utilised in commercial box sanitisers or handheld wands to disinfect high-touch surfaces in the fight against the coronavirus? The development brings a profound resonance to her concept of traditional garments that are not always what they seem, exploring trompe l’oeil fabrics, transformable proportions and reversible pieces.

As the first ready-to-wear designer to utilise UV sunlight for colour-changing fabric technology in 2013, Kunihiko Morinaga steps up with photochromic materials for the utilitarian outerwear, bags and accessories, a first on a European runway. When UV light hits the light- sensitive quilted materials, spectators were wowed to see the pale yellow pieces appear in a more distinct Fendi yellow, while the white pieces reveal the new Fendi Code in black.

The starting point of this collection comes from the inspirational softness of the house’s first products, which led to Daniel Lee’s poetic sensuality for these Autumn/Winter 2020 menswear offerings.

Silhouettes are elongated, clinging to the twist and bend of the body with bandage-like dexterity of stretch materials such as knits and jersey. Luxury and comfort are not compromised in his elegant definitions of form.

The muse for what would be Clare Waight Keller’s last men’s collection for the house of Givenchy is Yeshwant Rao Holkar II, otherwise known as the 14th Maharajah of Indore. She formed the collection’s symbiotic relationship between clothing and jewellery from the flamboyant aristocrat’s style that lavished a sleek wardrobe of bespoke pieces with precious metals and extravagant gems and pearls.

The show is presented in Givenchy’s haute couture salon, a giveaway of her approach in harnessing the house’s expertise. Here, it produced refined, close- to-the-body tailored pieces. Embellishments ranging from brooches to kilt pins and charm- festooned fob chains fasten double-breasted blazers and coats, while horology and lapidary sketches are turned into exquisite embroideries. Then Keller subverts it all with high-necked latex T-shirts, unfinished zip cummerbunds, glossy leather and oversized knits, elevating the collection with a twist of eclecticism and youthful edge.

Issey Miyake’s autumn/winter 2020 menswear show is essentially a jam session directed by prolific American choreographer and performer, Daniel Ezralow. It is a joyous presentation, made even more exhilarating with the spontaneity of modelling cameos by dancing band members playing music. They were decked in exuberant prints and colours, best exemplified by the series of sporty coats adorned with graphic prints depicting music instruments designed by award- winning Tokyo-based design unit, Goo Choki Par.

There is even a take on tuxedos, pleated of course. The collection scores points for innovation with the origami-esque parkas. The outerwear range is born from the concept of unfolding a polyhedron, a three-dimensional shape that when flattened, becomes a single continuous surface composed of polygons like triangles or squares. This translates to a construction that allows the parkas to fold into flat shapes.

This story first appeared in the August 2020 issue of Prestige Singapore.

Sign up to get the latest luxury and lifestyle news delivered to your inbox.
Jacquie Ang
Fashion