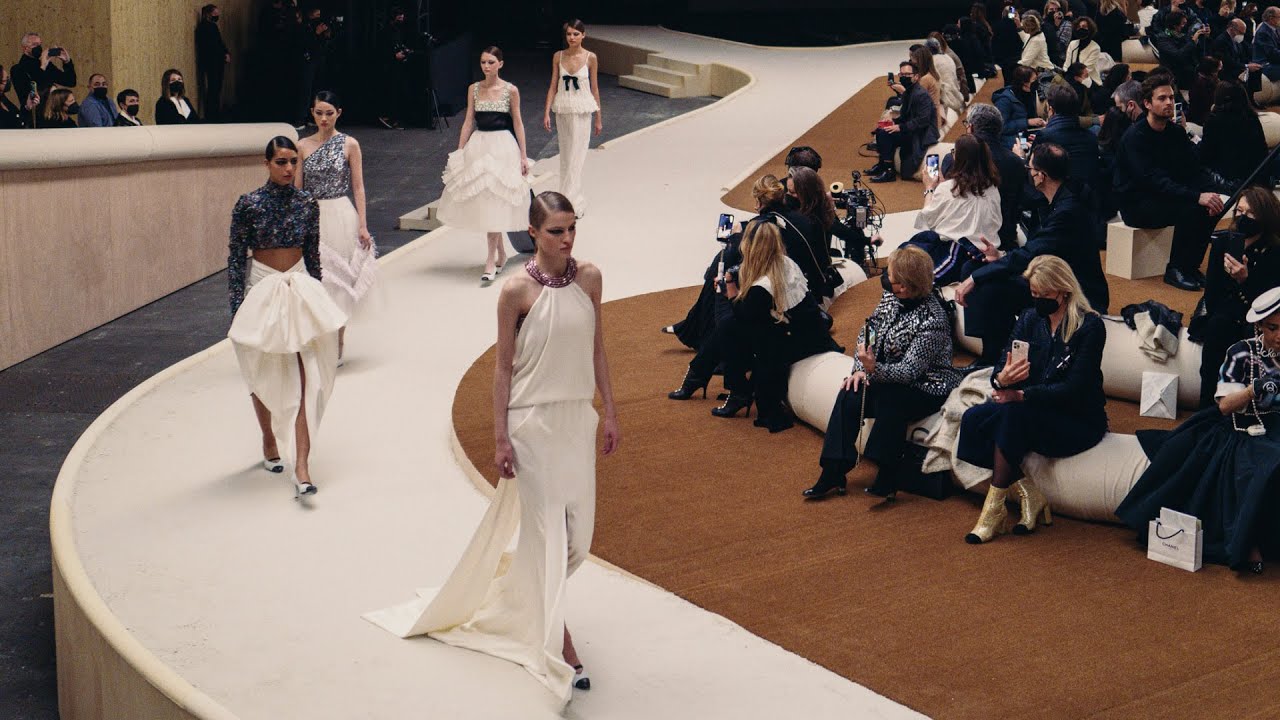 As Couture Week comes to an end, here’s our selection of the best shows we saw this season.

Although having a certain celebrity couple consisting of an actress and a rapper-turned-semi-religious-figure at the front row of Schiaparelli was not the pop culture moment it had hoped to be, the Couture shows proved that fashion can be a strip of light in this covid-induced limbo.

Schiaparelli’s Haute Couture has become somewhat a pièce de résistance during the couture season. This time around, Daniel Roseberry delves into the mesmerising and, a bit frightening, worlds of sci-fi and takes us with him. As of late, Roseberry limits himself to the trinity of golds, blacks and whites in his palette, which, in turn, allows him to keep the audience’s focus on the extraordinary architecture of each piece. The gilded cage of a dress – with its stoned tentacles wrapping the body – created a vision of some Aztec deity (this author couldn’t help but think of late Thierry Mugler’s corsetry work). Some looks quite literally feature golden Saturn rings attached to cinched bustiers.

It was all too vague, at first, to tell what exactly was the inspiration behind Maria Grazia Chiuri’s Haute Couture collection for Dior. Turns out, that was precisely the point. The designer chose her latest show to become a celebration of human connection and togetherness – the two components so inherent to the making of any couture collection. Chiuri creates an immaculate symphony of greys (hi, Kim Jones’ Fall 2022), creams and whites, with silhouettes so pure and embroidery so delicate, it feels like a light midsummer slumber. Chiuri’s signature off-shoulder dresses have undergone another transformation – this time – through adornment with pearl embellishments or styling with shimmery leggings underneath.

Alexandre Vuthier’s Spring 2022 Couture collection transported his loyal fans into the world of perpetual partying – power suits strode alongside feather-trimmed liquid gowns and slip dresses. Vauthier stays true to his signature palette of blacks, teals and reds with occasional pops of white, grey and baby pink. The collection is a dazzler. The Old Hollywood references are apparent: there is the crystal-studded padded dress à la Joan Crawford, Katharine Hepburn’s iconic grey power suit and Vauthier’s glamorous take on the flapper dress, updated with airy petals of chiffon and a gathered bodice. The show-stealer is, by far, the black velvet bodysuit with a feather-embellished sequined cape – an elevated take on a variation of the 1920s circus costume.

For a heritage brand like Chanel, every collection inadvertently becomes a retrospection. This time around, Virginie Viard looks at the 1920s as the source of her inspiration. To grant the collection a summery feel, Viard transforms the classic flapper dress into a garment more modern and dynamic by switching heavy beading with bits of chiffon. The roaring twenties staple – ostrich – is a prominent fixture in the line-up; the feather-embellished skirt with a side slit appears under a sculptured one-shoulder top, where camelia patterns are laid with black-and-white sequins. Bottom-heavy silhouettes dominated the Chanel runway, not only in the form of flapper elements, may I add, but also as white silk tulip skirts, paired so tastefully with stoned and frilled crop tops.

Couture Spring 2022 seemed to have been an opportunity for the designers to dive into their roaring twenties fantasies. Russian designer Ulyana Sergeenko veered away from the quintessential 1920s costume and, instead, embraced the works of cubist artists and art deco aesthetics in her collection. Skirts, dresses and bustiers adopted geometric motives in the forms of embroidery that accentuated hourglass silhouettes. Sergeenko’s penchant for heavy-handed glamour made itself known as beads and crystals trickled down the black silk corset of a sleeveless dress styled with a boa made out of silk and chiffon.

Glenn Martens‘s interpretation of of Jean Paul Gaultier’s heritage for the Spring 2022 Couture collection was a dream. Canons of Gaultier’s own devisal – tiger prints, aerodynamic stripes, corsets – were masterfully interwoven with Marten’s subversive sensibilities; take the knit dress with sharp coral protrusions, for example. The collection seemed like Le Bal of the 22nd century – emerald-green silk dress with the gathered armour-like bodice and cloud-shape skirt stole the show. Styling of satin corsets with denim seemed fresh and not at all watered down the high-octane feel of the show, while the colourful dress comprised of multiple layered sheer panels that revealed the stomach was the epitome of the Gaultier-Martens creative conversation.

High-fashion vampires walked down the Viktor & Rolf Couture runway this season. Rolf Snoeren wanted to lean into the Nosferatu lore in interpreting the creature’s signature neckless look. The result was enticingly bizarre outfits ranging from suits to colonial dresses and coats. Snoeren and Hosrting devised a delicious, campy ambiance, fully utilising the literal references of the iconic horror films without stripping them to barely-recognisable motifs and – instead – offering a straightforward interpretation of the vampiric memorabilia – like Sadie Frost’s white funeral dress from Bram Stoker’s Dracula or Nosferatu’s very own cape.

Pierpaolo Piccioli once again proves to be the couturier of the future. Valentino’s Creative Director shatters the elitist perception of high fashion by curating an inclusive show that features a diverse range of bodies, ages and genders (something pioneered by the late Manfred Thierry Mugler in the late nineties). The show had Valentino’s signature chiffon, ruffles, explosive greens and fuchsias. Piccioli declared that fuller people have what it takes to carry couture, as demonstrated by the chocolate-brown dress hand-embroidered with two kilos of glass beads. It was refreshing to – also – see men appear on couture runways, especially in the chainmail-inspired embroidered two-piece.

For his Couture 2022 show, Zuhair Murad opened the doorway to the Imaginarium of Rafael Sabatini, where Captain Blood traversed the seven seas. Murad applied his ingenuity and feel for glamour to create a pirate-inspired fairy tale, where the spectres of models walked in Tricorn hats dripping in jewels. Pirate bandana made an appearance in an ensemble with a suave pleated gauze gown, conveying the sense of romanticism and longing for adventure. The 18th-century-inspired tenues de soirée read ethereal and daring – at the same time – with tattoo-esque prints plumbing the depths of unapologetic sensuality without even the faintest hint of vulgarity.

Kim Jones was the latest couturier inspired by the sci-fi world: Dune and Star Wars to be exact. Fendi’s métier was an ode to Rome imagined through a lens of some sort of space odyssey. The models embodied celestial goddesses in satin, velvet and sheer evening gowns. The floor-length number with tulip-shaped sleeves bore the image of the Virgin Mary, which inspired solemn melancholy. Baroque prints on some of the shorter pieces conveyed that alluring darkness – so characteristic of the monumental science fiction works à la Prometheus. There was a chiton-inspired midnight-blue silk dress trimmed with beads and a white mini dress with a print of an ancient Roman statue – both, among the rest, paying homage to the House’s heritage.