‘Fashioning Masculinities: The Art of Menswear’ at London’s V&A Examines the Concept of Masculinity Through Time 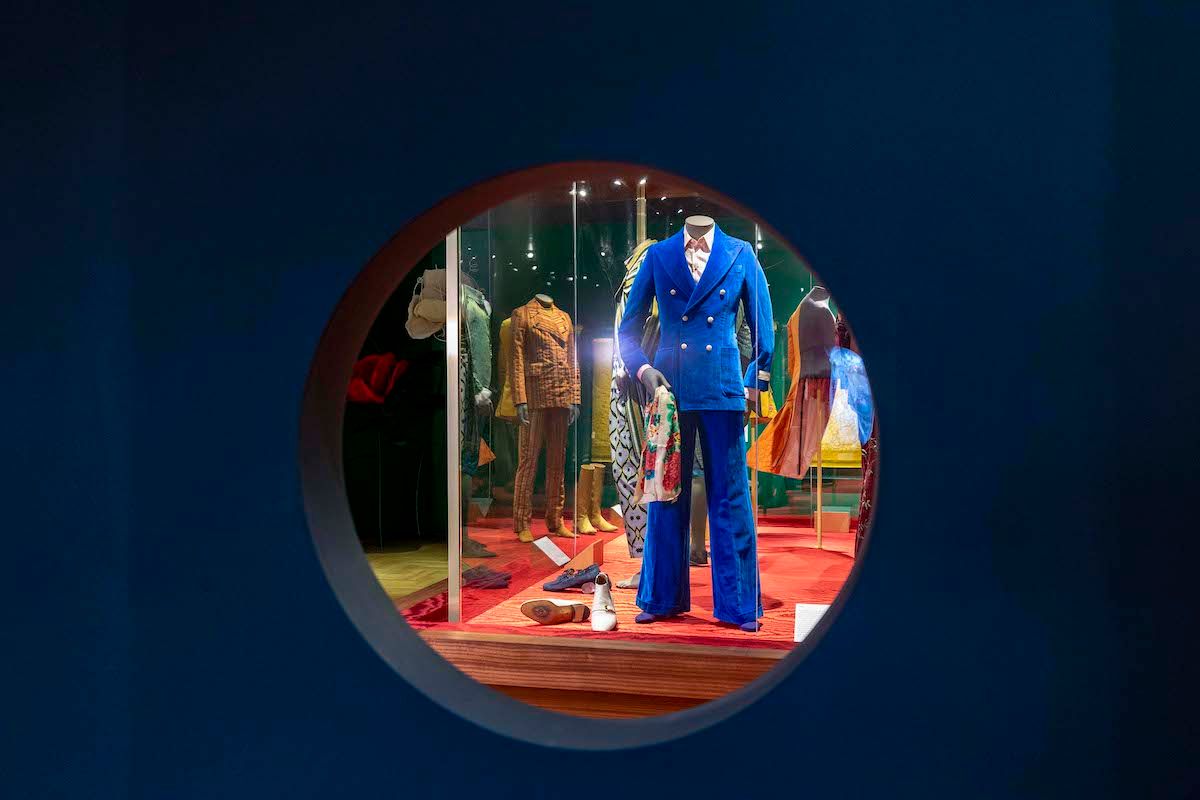 Style
‘Fashioning Masculinities: The Art of Menswear’ at London’s V&A Examines the Concept of Masculinity Through Time
Share
Next article

How has masculinity been performed through the ages? We look at how London’s V&A undresses, overdresses, redresses and dresses a narrative of playful scenarios.

Fashioning Masculinities: The Art of Menswear at London’s Victoria & Albert Museum might be backed by Gucci and its luminous designer Alessandro Michele, but our first thought while parading through the evolutionary trail of historical and present-day sartorial narcissisto, was of Gabrielle Chanel, a metrosexual a century before any footballer ever bent it like David Beckham, and who, by appropriating working men’s styles and fabrics like jersey exactly a century ago, was fashioning masculinity and transforming the art of menswear into a workable, wearable blueprint for 20th-century women. And the rest is “herstory”. But let’s hold that thought for a moment.

This ambitious, aspirant and busy show attempts to answer the question of what makes your average male the man-you-facture, and whether men have been dressed, undressed and redressed into a Gordian knot of stylistic and psychological complexity through fashion evolution, by a litany of designers, tailors and artists. The V&A draws heavily from its artistic archive for this show in which art, tellingly, becomes a predominant storytelling force and narrative mood board throughout.

Says Gucci’s Michele in his introduction to the show, “In a patriarchal society, masculine gender-identity is often moulded by violently toxic stereotypes …It’s time to celebrate a man who is free to practice self-determination, without social constraints, without authoritarian sanctions, without suffocating stereotypes.”

It’s a point celebrated most forcefully in the show’s culmination, which showcases three totemic gowns– a Christian Siriano tuxedo gown worn by Billy Porter, which sent the digital world into deliriums of electronic excitation when Porter red-carpeted it at the 2019 Oscars; an Alessandro Michele for Gucci custom gown and tailored jacket (the latter Anna Wintour’s idea at the 11th hour) worn by Harry Styles on the occasion of his being the first male solo star on the cover of US Vogue in 2021; and a wedding dress by Ella Lynch worn by Bimini Bon Boulash for the Season Two finale of Ru Paul’s Drag Race UK. This trio of alternate looks is showing together for the first time in any UK museum.

Co-curators Claire Wilcox and Rosalind McKever assert that masculine fashion is enjoying a period of unprecedented creativity in their show notes. “Rather than a linear or definitive history, this is a journey across time and gender,” they say. “The exhibition brings together historical and contemporary looks with art that reveals how masculinity has been performed. This is a celebration of the masculine wardrobe, and everyone is invited to join in.”

So we’re treated to an A-Z of aesthetic wonder – from early plaster casts of idealised male bodies in the form of Michelangelo’s David, the Apollo Belvedere and Farnese Hermes, juxtaposed with modern and contemporary prints and photography from Calvin Klein underwear commercials to David Hockney and Isaac Julien images. Simultaneously, we’re shown contemporary ensembles by Giorgio Armani, Jean-Paul Gaultier, Ludovic de Saint Semin and Virgil Abloh for Off White, highlighting a series of sheer, draped, and sculpted flesh approaches to male dressing. The Undressed section concludes with the impossible perfection of Auguste Rodin’s Age of Bronze sculpture, and Tiresias, a performance piece by Cassills in which the artist employs body heat to melt a neoclassical torso carved in ice.

In the busy bustle and hustle of the show’s many presentations, another thought strikes us. Dare one say, despite our progressive and newly shaped any-and-all beyond the binary fashion ecosystem, that we may have lost our sense of adventure and boldness to some degree.

Think about a man like Leonardo da Vinci. When he left Florence on a military mission in 1504, his precious possessions were deposited in two trunks at a monastery. One was filled with books, the other, clothes and what skeins they were. Renaissance Dandy par excellence, Leonardo appears to have dressed mostly in purple or pink. To wit; one gown of taffeta; one lining of velvet to be used as a gown; one Arab cloak; one gown of dusty rose, one pink Catalan gown, one dark purple cape, with a hood of velvet; one purple satin overcoat; one overcoat of crimson satin, in the French style; one pair of dark purple tights, two pink caps, one shirt of Reims linen, one pair of dusty-rose tights.

That spirit is beautifully channelled in a be-ribboned painting of a Georgian earl, who postures hand on hip in a scarlet robe, in an almost metre-high ostrich plumed hat. He features in the Overdressed section, which tackles (no pun intended) elite masculine wardrobes, epitomised by oversize silhouettes, elaborate codpieces, lavish silks and velvet in daring colours, and symbolic patterns befitting status, wealth and individuality. Think lots of pink. There’s also everything from armoured breastplates to silky smoking suits, and a Dolce & Gabbana cape juxtaposed with a Sofonisba Anguissola painting. We also get make-up, shaving equipment and three grooming tips from fashion’s pristine hygienist, Tom Ford.

Some scholars and artficianados still believe Leonardo’s Mona Lisa could even be the artist’s own selfie as a man in drag. It’s perhaps no coincidence that 400 years later Marcel Duchamp came along and made her a man by drawing a moustache and beard on a postcard of Leonardo’s painting. What, exactly, was Duchamp trying to tell us?

Especially given that Duchamp himself cultivated a glamorous and intriguing “herself”, known as Rose Sélavy, his own female alter ego, who was repeatedly photographed by Man Ray. Once you start to scratch at the surface of art, and fashion, the seams of genderplay start to get really interesting.

Here’s Virginia Woolf in Orlando: “Different though the sexes are, they intermix. In every human being a vacillation from one sex to the other takes place, and often it is only the clothes that keep the male or female likeness, while underneath the sex is the very opposite
of what it is above.”

It’s notable the show takes the Greek prophet Tiresias as a subject. The blind seer, who appears in numerous works of Greek mythology, was transformed from male to female and back again every seven years by the goddess Hera. She’d enrolled Tiresias to intervene in an argument she was conducting with Zeus about whether men or women enjoyed sexual intercourse more. She thought men gained more pleasure. Since Tiresias had experienced both sensations, he seemed the perfect intelligencer. He contradicted her belief, and said that of the pleasure derived from sex, nine parts belonged to woman and only one part to men. Angry that she’d lost her wager with Zeus, Hera blinded Tiresias.

Zeus, by way of compensation, couldn’t restore Tiersias’s vision but gave him the gift of foresight, which meant Tiersias could see the future. He recurs in later European literature as a man-woman, in Guillaume Apollinaire’s Surrealist play Les Mamelles de Tiresias (1917), and in TS Eliot’s The Wasteland (1922), as he watches a couple having aimless sex in an office. Stories like Tiresias’ have provided inspiration for artists and designers centring on the queer body and its physical and sartorial metamorphoses since, and especially now.

Notable by its absence in the show is any reference to the influence of Japanese fashion on the question of identity, cosplay and other performing roles in men’s fashion. Japan has an entire fashion subculture that ignores gender completely. Kansai Yamamoto famously took his designs to London and thrived with David Bowie (who’s in the show), by making garments independent of the wearer and allowing Bowie to “fit” himself to them.

And let’s not forget, Rei Kawakubo’s Comme des Garcons (Like the Boys) was an indirect reference to Gabrielle Chanel, who’d started a move towards genderless or genderplay fashion by doing away with women’s corsets. That trend made its way to Japan in the ’20s, when Japanese “moga” – modern girls – were called “garcon” in the streets.

Yohji Yamamoto, who graduated in law before he took up the threads, said that when he first started designing he wanted to create men’s clothes for women, and even used women on his male runway shows. All of which makes us wonder, what is masculinity when it’s being worn by women? Is it still masculine, or are they still feminine?
And we’re back where we started. Chanel. We walk out of this glamorous pantomime of costume with one futuristic thought in our heads; and, dare one say, the most tantalising and commercially contemporary question in the menswear ecosystem. What if today’s Chanel went counter-cultural full circle, as Karl Lagerfeld once hinted to us it might back in 2008, by fashioning femininity into the art of a new masculinity for men? Le Chanel, or Monsieur Chanel, anyone?

‘Fashioning Masculinities: The Art of Menswear’ is at London’s V&A until November 6