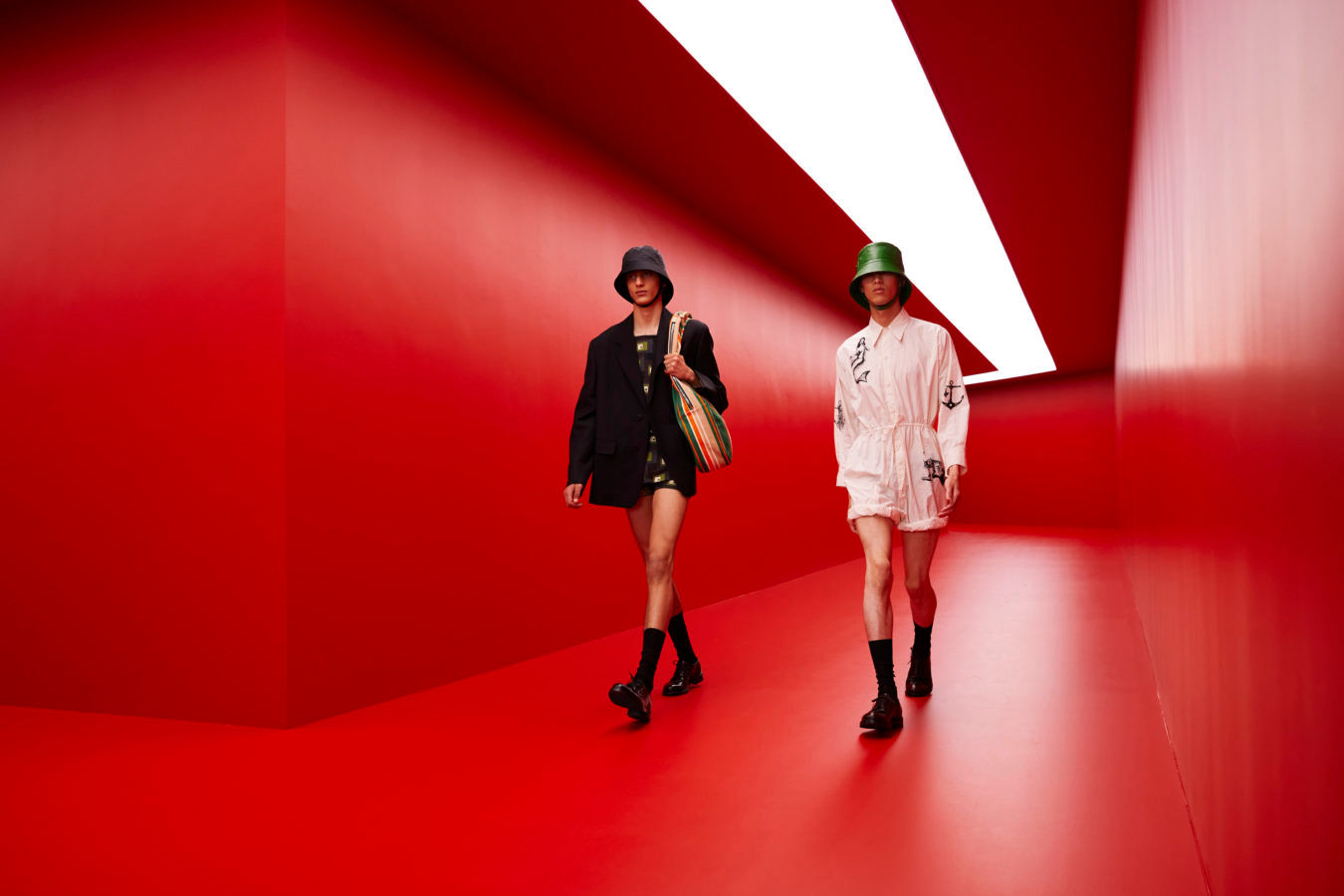 As designers break the shackles of the traditional and expected, menswear in spring 2022 climbs to daring and liberating heights. Here we dissect this season’s loudest trends.

As the seasons get warmer, shorts become shorter. That brilliant speck of wisdom aside, spring 2022 brings a resurgent interest in swimwear that’s incorporated into tailoring and streetwear alike. The parade of beach-ready dandies is led, of course, by Miuccia Prada’s and Raf Simons’ thigh-hugging tailored shorts, some in nylon and others in knits, channelling inspiration from the men’s trunks that dominated upscale beaches from the 1920s to the ’50s. These are ingeniously paired with blazers, heavy leather jackets, parkas and – inevitably – bucket hats.

The onset of spring/summer brings with it a re- invention (or attempted reinvention) of boho style – that much is inevitable. This time around, the trend seems to be headed in two directions simultaneously. As often happens, Saint Lauren and Celine reign over the avant-garde camp. Anthony Vaccarello seems to have summoned up every pirate ghosts he could reach to help him design the collection: crêpe de chine poet shirts in white, black and teal green evoke a longing for both romance and adventure, à la Rafael Sabatini’s Captain Blood, for example. A ruffle-trimmed embroidered cape with dramatic bishop sleeves – it could be the go-to get-up for a younger Black Beard with an Instagram account – rightly deserves a spotlight.

Vaccarello’s predecessor at Saint Laurent and current creative director of Celine, Hedi Slimane, approaches the theme in a manner less 17th-century Venice than ’90s California. Layer upon layer of clashing prints and textures create a vision of nonchalance, though to look as fantastic as it did on the runway clearly requires painstaking attention to detail. Slimane’s signature heeled leather boots step out beneath flowing floral pants, long denim shirts and snakeskin-stamped bombers.

Among the traditionalists is Hermès, where lightness is the quality so precisely expressed by Véronique Nichanian’s collection through a signature simplicity that never veers into minimalism. The symphony of whites, greys, turquoise and pink plays beautifully on linen shirts styled with knee-length shorts and track pants. This particular interpretation of the bohemian aesthetics touches ever so lightly on collegiate styles, while never adopting the obvious visual canons of the latter

Subversion of tradition, in the context of a heritage fashion house, entails certain risks, yet it can be quite spectacular if done right. The truth of that sentiment is once again proven by Burberry’s Ricardo Tisci’s spring collection, which evinces the aesthetics he’d been developing during his tenure at Givenchy. Here, he strips down the coats to the bone, leaving nothing but long halterneck vests, sometimes cinched with belts. Sleeves are also lost in one of the blazers, leaving a punk-echoing waistcoat with apparent stitching. We’re told Tisci drew inspiration from Día de los Muertos, borrowing the festive skull and – you guessed it – breaking it down to an abstract silhouette that appears in the range as a graphic print and a series of two corsets with soft edges.

One designer unlikely to be called a deconstruction connoisseur is Balmain’s Olivier Rousteing. This season, however, his generation’s original enfant terrible emphasises that breaking down a concept or a silhouette doesn’t entail entrapment in the chains of minimalism. Rousteing’s slashed-open jackets and tops imagine shapes that grant his models a statuesque quality. Elongating the midsection is one of his favourite techniques – his personal style includes endless variations of knee-length shirts and sweaters, often paired with structured blazers or leather jackets.

Fashion’s role as a haven for various art forms to come together is second only to that of film, and this season a plethora of designers embraced art in their creations. Calligraphy is the inspiration behind some of the most memorable looks: Berluti goes big on the Scritto motif that once inspired the house’s inscription on its leather goods, as creative director Haider Ackerman blows it up and turns it into a print adorning coats, bomber jackets, shirts, shorts and bags. Dior’s Kim Jones takes the art of penmanship as a base and updates it with neo-expressionist elements, à la Basquiat. The elaborate prints come from the brush of artist George Condo; appearing on highly symmetrical buttoned-up shirts, they strike the perfect balance between wearability and creative ingenuity.

After bohemian styles, green is another common theme tying the fashion season together, though the ways in which designers are exploring the colour is worth talking about. Back at Dior, Kim Jones – the man of the moment for the past couple of years – dunks high-collared suede suits in lime-green. The result could easily have turned out a horror from the pages of a DC comic, but so long as Jones is helming the French house, no such thing is possible. Who knew the combination of soft suede and retina-busting acidity could look not only pleasant but even right? The soft, languid looks in their construction, presented on the runway in monochrome, can easily be broken down and matched with tailored staples, including beige coats, sepia pants and exaggerated heavy leather jackets (if, that is, you want to embody the boldness of cult supervillain Bane).

Ermenegildo Zegna, known for upholding centuries-old traditions of craftsmanship and tailoring, also uses green to push its comfort zone to a new frontier. The spring 2022 collection is centred around relaxed, slouchy suits and smart-casual elements. There are tie-front military- green suits, bomber jackets, shorts and technical shirts. Utility such as this isn’t normally embraced by the brand, yet Alessandro Sartori somehow manages to pull it off, while keeping the canons of high-class Italian tailoring paramount.