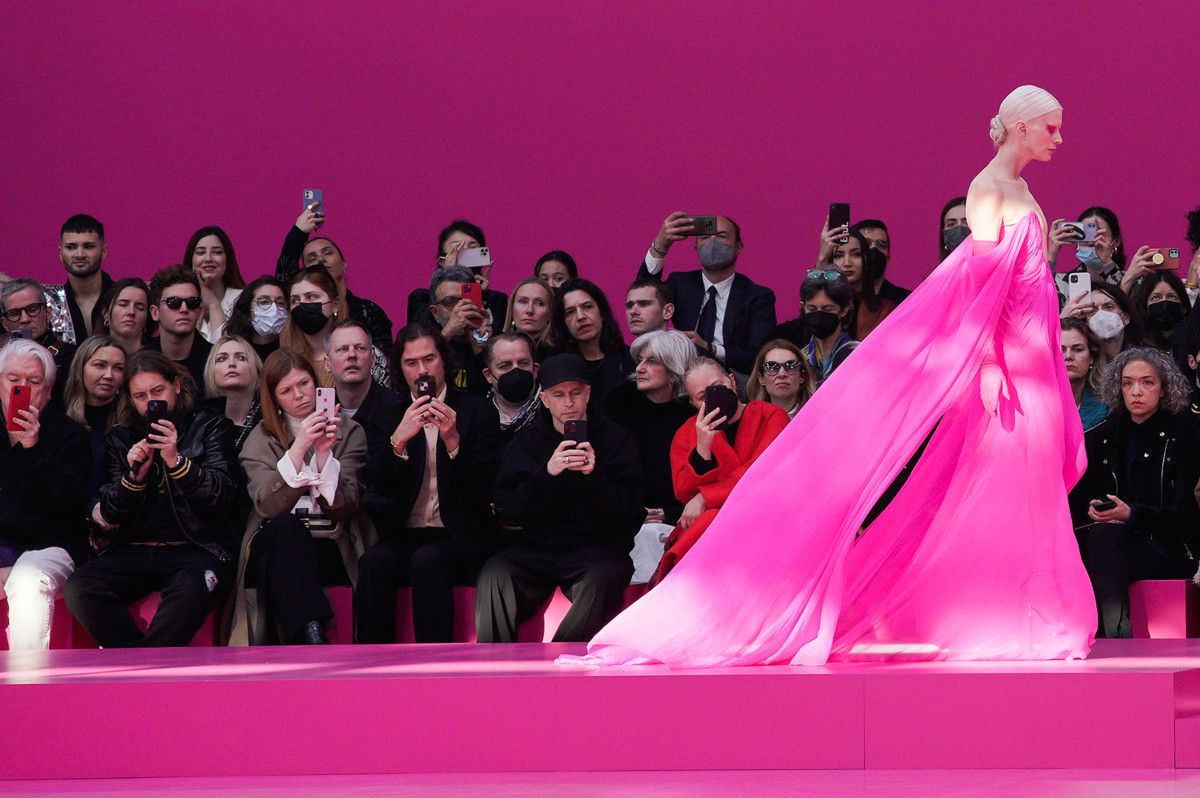 Here are our picks for the most memorable shows from Paris Fashion Week Day 6:

Pierpaolo Piccioli’s Valentino autumn 2022 was one of the most memorable shows during the sixth day of Paris fashion week. The designer used a metaphorical highlighter to turn the collection and, with it, the set, neon-pink. Pink was an interesting choice, given Valentino’s intimate relationship with red. The collection, however, was still magnificent. A staggering 81 looks of both womenswear and menswear ranged from majestic gowns with inverted sweetheart necklines and floor-sweeping coats to more casual (but not less pink) streetwear ensembles.

If one’s retinae are still vibrating from the electric-pink Valentino extravagance, one could grant them an opportunity to rest by flipping through Schiaparelli’s autumn 2022 lookbook. Daniel Roseberry’s ability to merge Schiaparelli’s French heritage with Americana is, although genius, no longer reads as a novelty but as something both natural and logical.  The collection itself, presented as a series of black-and-white images, revealed extreme silhouette, most striking of which was, by far, the hellraiser-inspired leather look with spiky bustier and padding. Surreal prints – this time – with a heavy reliance on spirals, was featured throughout – from handbags to coats and dresses.

Compared to previous seasons, Matthew William’s fall 2022 collection for Givenchy seemed streamlined and straightforward. The show fits into the classic street-to-evening narrative, starting with a range of graphic tees over leather gloves, making way for heavy outerwear, where coats and layers were either merged or layered on top of each other and finally closing with a couple of cocktail looks. The component present in almost every look was tiers: they were on the tees, mini dresses, coats and jackets, tying the sportswear-influenced and glamorous phases of the collection together.

Even though Twitter was filled with images of a certain makeup-and-shapewear mogul, wrapped in Balenciaga-branded tape, this author will resist a temptation to offer their hot take on the subject and will focus on the collection instead. Demna Gvasalia orchestrated what could only be described as a theatre production: Balenciaga girls and boys walked through an artificial snowstorm (hi McQueen Winter 1999) in sunglasses. The range featured a healthy balance of dramatic outerwear and sleek bodysuits, including the notorious yellow tape piece.