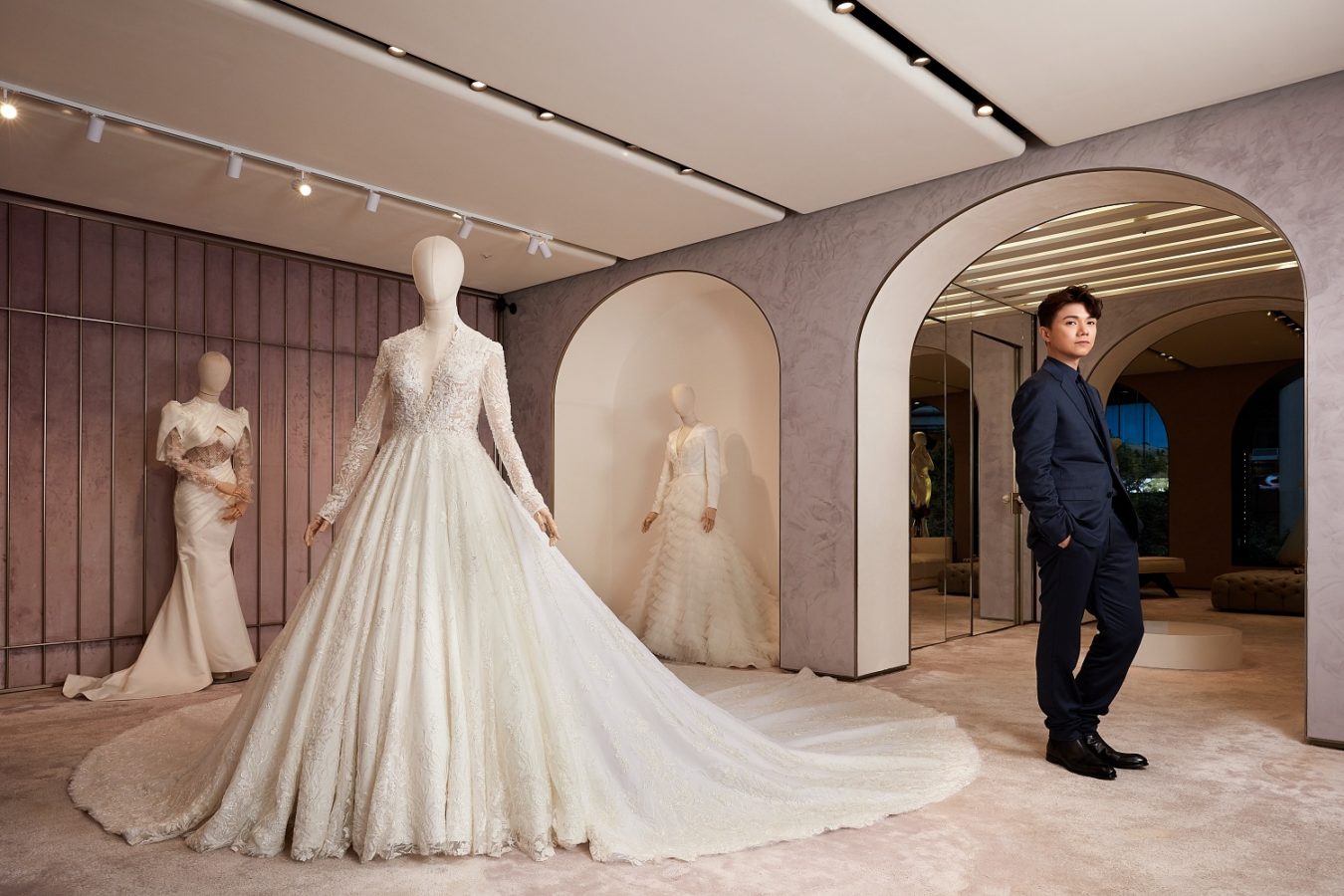 One hundred years ago, Sennet Frères was a watch merchant; today, it’s a wedding-couture brand. So where do we begin with this story? Local singer-songwriter Hins Cheung discovered the fascinating lives of the Weill family when he took up residence in their old family home, and made it his mission to revive the long lost brand.

If Hins Cheung weren’t a musician, he’d probably have been a historian. The singer-songwriter, who’s released more than 10 studio albums and appeared in a number of Hong Kong feature films, has a not-so-secret penchant for historical research. But whereas some find it compelling to discover their ancestral roots and chart out their family tree, Cheung put his efforts into completing the picture of another family altogether – that of the high-society tale of Albert and Rosie Weill, who lived in Hong Kong in the 1920s.

He tells me it all started when he moved into The Alberose, a colonial low-rise on Pokfulam Road that was built in 1926 and is now listed as a Grade II historic building. “Alberose was such a pretty name, so I started wondering how the mansion came to be called that,” says Hins. “It was actually a portmanteau, combining the names Albert and Rosie, the original homeowners of the Alberose.”

And the longer Hins lived at the Alberose, the more drawn he was to the stories within its walls. “I’d sit in my armchair,” he says, “and just start thinking about the lives of the people who were here before me. And so
I started doing a bit of research and that’s when I realised just how fascinating these people, the Weill family, were.”

It was almost a snowball effect. The more Cheung found out about the Weills, the more he wanted to know about the way they lived, their travels and their personalities. He collected tidbits of information all the way from Hong Kong, to Paris and London, using relics and archives to consolidate and reconstruct the entire family.

One of the most important thing Cheung found out about the Weills was that the prominent French-Jewish family headed a watch and jewellery company called Sennet Frères in the early 20th century. When Robert died in 1922, Rosie took over the reins of the company and, thanks to her business acumen and unique vision, it became a leading distributor for top watch and jewellery brands, including Patek Philippe, in the Far East. Patek’s signature table clocks and pocket watches were prized by the Manchu imperial family, antiques that are displayed at the Palace Museum in Beijing to this day.

In 2019, a chance encounter ignited Cheung’s interest in reviving the Weills’ legacy in Hong Kong. “Molly O’Dell was a third-generation descendant of the family who actually lived at the Alberose for a short while when she was very young,” says Cheung. “I got to meet her in 2019, when Walk-In Hong Kong, which is a conservation organisation, flew her back to Hong Kong to revisit the Alberose. She pointed out the various rooms she’d stayed in, and it brought back a lot of sentimental memories.”

By then, Cheung already had a pretty solid picture of the Weills, but it was still a wonderful experience to be able to walk through the gardens and hear stories from a direct descendant. “I do know more about them than my own family background. But my family is also less interesting,” says Cheung with a laugh.

Cheung and O’Dell also talked about the Weill’s heart and soul: the Sennet Frères brand, which sadly didn’t survive the rigours of the Japanese Occupation and had disappeared from the market by the 1950s. “A single woman with four children, Rosie Weill had worked so hard after her husband’s death to build the brand,” says Cheung, “so it was especially tragic when both of her sons lost their lives in prison camps during the war. Rosie basically died from depression, and afterwards, her elder daughter Sophie and her husband focussed on other businesses, while her younger daughter, Susannah, moved to the UK.”

O’Dell’s visit to the Alberose sparked an idea. “There were so many untold stories about this family, so I thought that maybe we could continue the legacy of Sennet Frères, and bring the brand back to life in Hong Kong,” says Cheung. “Molly gave me her blessing to do it. But we had to think about what the brand would be today.

“Sennet Frères couldn’t exist as a watch and jewellery brand now. It’s too hard. It was the biggest distributor for Patek Philippe and for Rolex in the past. How do you top that? I also don’t really have that much experience in watch dealerships,” says Cheung. “But Molly and I thought that the brand was really about the family behind it. The strong women figures: Rosie, Susannah and Sophie. So we began thinking in that direction instead.”

With the help of long-time friend and designer Kev Yiu, Cheung decided to relaunch Sennet Frères as a wedding- and evening-couture brand, inspired by the unique personalities and stories of the three Weill women. Yiu recalls Cheung calling him and messaging him at odd hours with different ideas, but this was the one that clicked the most. He was on board with the project with no hesitation.

“Hins would message me all his ideas, as if I were his sounding board. Half the time, I didn’t even understand what he wanted to do,” says Yiu with a chuckle. “But the opportunity to reimagine the three women of the Weill family – and to design wedding and evening gowns inspired by their individual styles and personalities – was too good not to take.”

Both Yiu and Cheung loved the fashion from the 1940s and ’50s, especially the romantic and revolutionary silhouettes created by the one and only Christian Dior. Using Rosie, Susannah and Sophie as his muses, Yiu designed the new Sennet Frères spring/summer 2021 collection, with the design theme of aimer (“to love”, in French). The 45 wedding and evening gowns were extremely modern in their silhouettes, but vintage in their details. High necklines and button details feature prominently, as do Yiu’s signature hand-pressed silk flowers, three-dimensional embroidered floral ornaments, and inlay and bead embroidery techniques.

The Roaring Twenties was the starting point for Albert and Rosie Weill’s love story. A century later, their brand Sennet Frères is back to celebrate unions and marriages – and despite the pandemic, both Cheung and Yiu think it’s a fitting start.

“The Roaring Twenties came right after the First World War, and people lived like there was no tomorrow,” says Yiu. “Parties were grander and there was generally more romanticism around. Right now we don’t know when the pandemic will end, so why wait to get married?”

Cheung agrees. “To a certain extent, it’s why we decided to launch the brand at this time. A lot of people don’t understand why we’d open during the pandemic. But then I realised, people are getting married anyway. In uncertain times, people would prefer to fall in love sooner rather than later.”