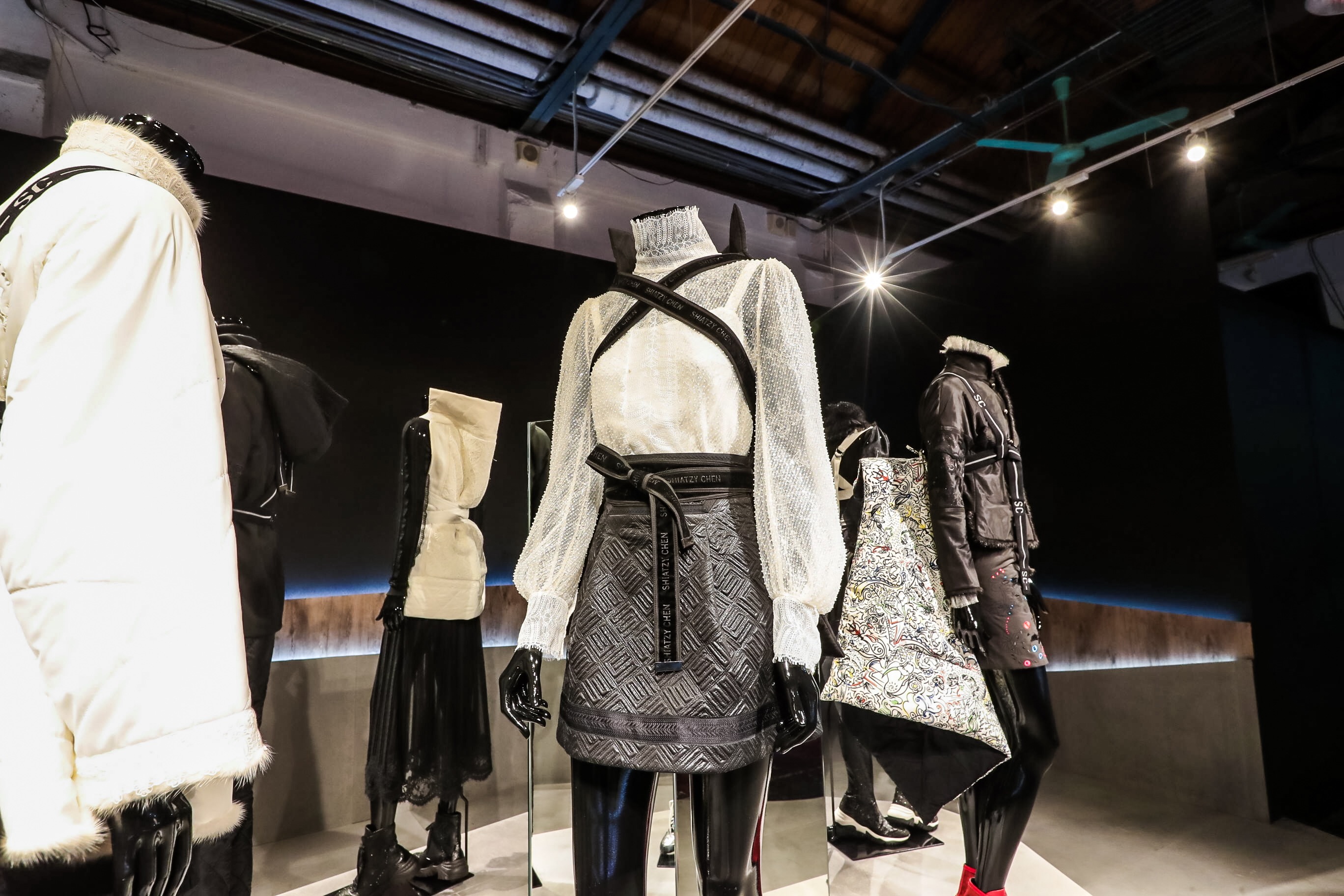 Walking through Shiatzy Chen’s Whisper in Threads in Taipei’s Huashan 1914 Creative Park, it’s evident that the Taiwanese brand places craft at the centre of its identity.
Pieces that comprise the autumn/winter 2019 collection, inspired by Miao tribeswomen, greet guests in a section of the exhibition devoted to the colours red, black and silver, while others inspired by plum blossoms fill the pre-autumn section. Near the end is a seamstress, mesmerisingly pushing and pulling string through silk as the form of a phoenix emerges. The final alcove is home to a wall of sketches replete with a digital interface tracing the autumn/winter collection from inspiration to garment.
The project has been on the mind of founder and design director Tsai-hsia Chen (otherwise known as Madame Wang) since the brand’s 40th anniversary. And never one to do things by halves (after all, the brand remains the only Chinese import to have a permanent spot on the official Paris Fashion Week schedule), every detail has been carefully considered. She talked to Prestige at the exhibition.

What do you hope audiences will take away from the exhibition, especially regarding the brand and its commitment to traditional Chinese craftsmanship?

Every collection tries to tell a story from elements of Chinese culture. This autumn/winter I was inspired by the straps that mothers use to secure their babies to them in the Miao tribe. Han Chinese use a cloth, but the Miao straps are meticulously embroidered. It brings to mind the relation- ship between a mother and her child, how a mother raises her child and once the child grows up he or she takes care of the mother in turn.
The exhibition also shows the seamstresses’ skills and how their deft hands turn sketches into works of art on a garment. I hope it gives
people a better understanding of the entire design process, and the skill and art of embroidery.

Embroidery has alway been at the heart of Shiatzy Chen. Is this one of the reasons why a live seamstress at work is part of the exhibition?

Yes, I’ve always considered that supporting this art form is very important. There are many skilled seamstresses in China – in Guizhou and especially Suzhou. We look for our seamstresses in these two places, where they number in the thousands. They work on garment and tapestry embroideries for months and, given the number of ethnic-minority groups in China, each with their own distinctive crafts, I think it’s crucial to preserve and protect these industries to keep them from disappearing.

What do you think keeps your clients loyal to the brand?

The qipao is a unique piece of clothing and Eastern styles bring out a certain air in Chinese women that can’t be replicated. Those who come back to us generally attend different events and are told they look fantastic. They get compliments abroad and it makes them feel special. I really think that when Chinese women wear a qipao, the garment brings out an aura of Eastern grace, sophistication and beauty that’s very different from Western-style dress, so we must preserve this garment.

As China’s now known for counterfeiting, will it be hard to push luxury?

If you go back to the Song and Ming dynasties, our silk and paper were the most coveted in the world. Only after the fall of the Qing dynasty did the country become poor and things were made in a slipshod and rough manner, because there was simply no money. The Chinese then never spent time recovering these ancient arts. The thing is, though, critics of the Chinese the world over should probably realise that many of their crafts were originally taken from the Chinese before they modified the technique to make it their own.
I think we should look to our own histories and traditions, and not only revive dying crafts but also improve and evolve the industries. But that depends on the people of China, which is out of my control. I can only keep going at my own brand, creating luxury products that we’ve innovated to raise the level of the brand. That’s important, because if you don’t keep improving your product, your brand won’t go anywhere.

Would you encourage younger Chinese designers to make use of their heritage in design?

Absolutely. But it depends on the way they use it. It must be modern and appeal to buyers and clients alike each season. There’s no risk in replication, because these elements are conceptual and if taken literally, all designs would be the same and the stories would be the same every season. But it’s like when we buy cloth in Paris. Everybody in the world goes there to buy their cloth, but what they come out with is different, and even those who buy the same bolts come out with clothes that are totally distinct.

How do you keep up the momentum having designed for Shiatzy Chen for so many years?

I don’t count the years. I’ve always had a goal inside – to make Shiatzy Chen a respected international brand. So this goal serves as my motivation and gives me that energy. I think everyone needs to have a goal or an aim – that’s the best way to keep moving forward.