The Great and the Good at Gucci

Style
The Great and the Good at Gucci
Share
Next article

We recount how, over the past few years, the quintessentially Italian maison has acquired an articulated social media commitment and direction.

Now more than ever is the time to join together to protect the health, safety and human rights of girls and women around the world,” says Gucci’s Chime for Change co-founder and Kering Foundation board director Salma Hayek Pinault. “We stand in solidarity with women everywhere to put a stop to gender-based violence. We stand in solidarity with women everywhere, because we cannot risk the progress we have made in the long fight for gender equality.”

The Mexican-born actress, who’s also married to Kering Group owner François-Henri Pinault, posted a video message calling for unity and a symbolic stand with women around the world against gender-based violence, especially during a trying time for health and social services everywhere. 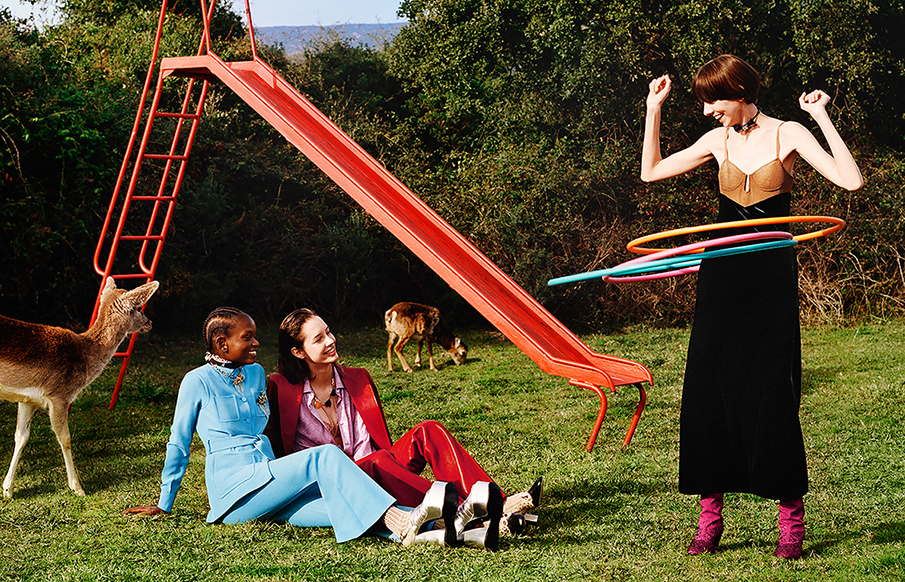 The #StandwithWomen campaign, just launched by Gucci’s Chime for Change and the Kering Foundation (established 12 years ago), aims to combat gender-based violence, which has drastically risen over the time of the Covid-19 pandemic. Emergency funds are raised for nonprofit organisations supporting women and girls globally, addressing the increase in this violence during this time.

“We stand in solidarity with women everywhere, because we cannot risk the progress we have made in the long fight for gender equality,” says Hayek Pinault.

Gucci is obviously one of luxury’s hot-button labels – it’s been having a moment ever since Alessandro Michele firmly took the reins in 2015. As radically, romantic and refreshing Michele’s aesthetic vision was for Gucci, the Italian brand isn’t just making waves on the style front. A growing number of social and ethical initiatives, many set up before Michele’s arrival, have made it a global fashion frontrunner in terms of consciousness and community.

Luxury mogul François-Henri Pinault, whose Kering Group is Gucci’s parent company, has been a long-time advocate of women’s rights and social equality, alongside his wife, who kicked off #StandwithWomen. The passion and support at the top of the group has trickled down to brands under the Kering umbrella. Pinault created the Kering Foundation 12 years ago, and in 2013 Gucci started the Chime for Change organisation – which champions gender equality globally, focusing on education, health and justice – and has raised nearly US$17 million to fund projects in 89 countries with non-profit partners. “He founded the Kering Foundation to end violence against women after becoming aware of a staggering statistic: one in three women around the world is a victim of abuse,” explains Kering’s Asia-Pacific vice president of communications, Charlotte Judet. “It’s a universal issue, whatever the country, the culture or the social class. Sixty percent of Kering employees are women and so are 80 percent of its customers. François-Henri Pinault wanted the Group to commit to a cause where it could make a real difference.”

Their proudest achievements over the past 12 years include directly funding survivor-support groups that help “break the global silence that perpetuates this violence. With our multi-year funding model, our partner NGOs have improved lives of women suffering from violence. As a result of our early-stage backing, innovative pilot projects have been able to prove their viability and scale-up,” said Judet. “And, of course, it’s our responsibility to make our own workplaces supportive for women survivors.” It’s not just gender-based causes, of course. Since the outbreak of the Covid-19 pandemic, Gucci has additionally donated €2 million to health initiatives in its native Italy and global bodies such as the World Health Organisation that are crucial to coordinating the worldwide health battle.

But with social and gender inequalities amplified by the current situation, Gucci’s social work and fundraising comes at a time of greater consciousness in the world of fashion from both brand and consumer. And it seems other brands are, in their way, following suit. Luxury factories all over Europe are suddenly producing PPE for frontline workers. Million-dollar donations are made by big brands to help those most in need, and in doing so the industry has found itself pulled towards previously unknown territory.

Who comes out of this with positive contributions and change? It’s a goal most are reaching for, however small we measure our victories. On a fashion front, ethical and sustainable methods and style will take centre-stage, we predict. The shift has occurred, and consumption has to mean more than it did before.

The charm of Gucci, particularly Alessandro Michele’s more inclusive and free incarnation, is that it celebrates diversity and women at its core. There’s a considered and consistent embrace of “the Other”, alternative modes of beauty, alternative ways of living and fluidity of all kinds. Genderless clothing is seen more and more on the Gucci runways, as a way of driving home a fluid style that transgresses traditional notions of femininity and masculinity. Gucci also sponsored the Sex Ed Podcast at the start of 2020, with Michele as special guest in one of the episodes, exploring stereotypes of gender and sexuality, as well as the fluidity and freedom that he prefers to champion. The brand’s pre-autumn campaign featuring lots of deer (a symbol of newness and youth) is an exploration of nature, spontaneity and childlike innocence.

Last year, when the Florence-founded label hired a Gucci global head of diversity, equity and inclusion in Renee E Tirado, it further pushed a positive corporate culture with a long-term diversity and inclusion plan woven into the core business.

Then came the brand’s Changemakers campaign, which started in January last year as an internal volunteer programme empowering Gucci employees to engage more deeply in their local communities. Quickly it morphed, with additional broader programmes for community engagement and promoting lasting social impact in communities of colour. This includes an impact fund and scholarship programme in North America, which is aimed at giving away millions to those awarded.

Although the urgency of the situation cannot be denied, we’re also looking for hope in the longer-lasting movements and programmes in place at brands such as Gucci. If a reshuffle of fashion and luxury is coming, as some predict, the brands with values that complement the zeitgeist might emerge as also the most relevant.

Sign up to get the latest luxury and lifestyle news delivered to your inbox.
Corporate Social Responsibility Gucci Kering

Dive into the world of @simondepury, a renowned au

@hoganbrand’s sneakers continue to be celebritie

@angiengcl is many things: a former lawyer, model,