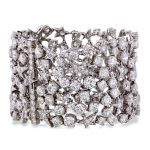 Pop star and actress Karen Mok was among the celebrities who graced last month’s Prestige Hong Kong and Lifestyle Asia’s Double Happiness party, held at China Tang, Central. The event was held in celebration of the joining of the two luxury lifestyle media outlets. Mok, who’s appeared on the cover of Prestige, and has had numerous hits in the worlds of music and film, sparkles on all occasions, but on this occasion her Hearts On Fire diamonds ensured she shone brighter than ever before.

Adorning the actress’s wrist at the event was the Constellation Bracelet from the Illa collection, while on her hand she wore an Illa Wrap Around Diamond Comet Ring and, from the Bridal collection, a Classic White Gold Diamond Ring. The Illa Constellation bracelet is a galaxy of glittering diamonds – a whopping 70 carats of them – and within this galaxy, five-pointed stars shine brightly, nestled among equally brilliant round stones.

Mok is no doubt aware that each diamond undergoes a rigorous selection process that begins with the choosing of a rough, followed by careful cutting and polishing by master craftsmen and ending with the stones being placed in exquisite settings. Of all stones, diamonds, of course, are especially valued for their brilliance, seemingly containing an inner fire that is maximised through Hearts On Fire’s cutting and polishing techniques. The jeweller thus ensures that each stone achieves its maximum fire-burst glow.

Hearts On Fire Director of Design Ilaria Lanzoni, known to her family and friends as Illa, is the driving force behind the Illa collection, which artfully combines the brand’s timeless feel with a contemporary fashion aesthetic. Lanzoni’s inspiration is the night sky, having been captivated by the stars as a child in her native Italy.