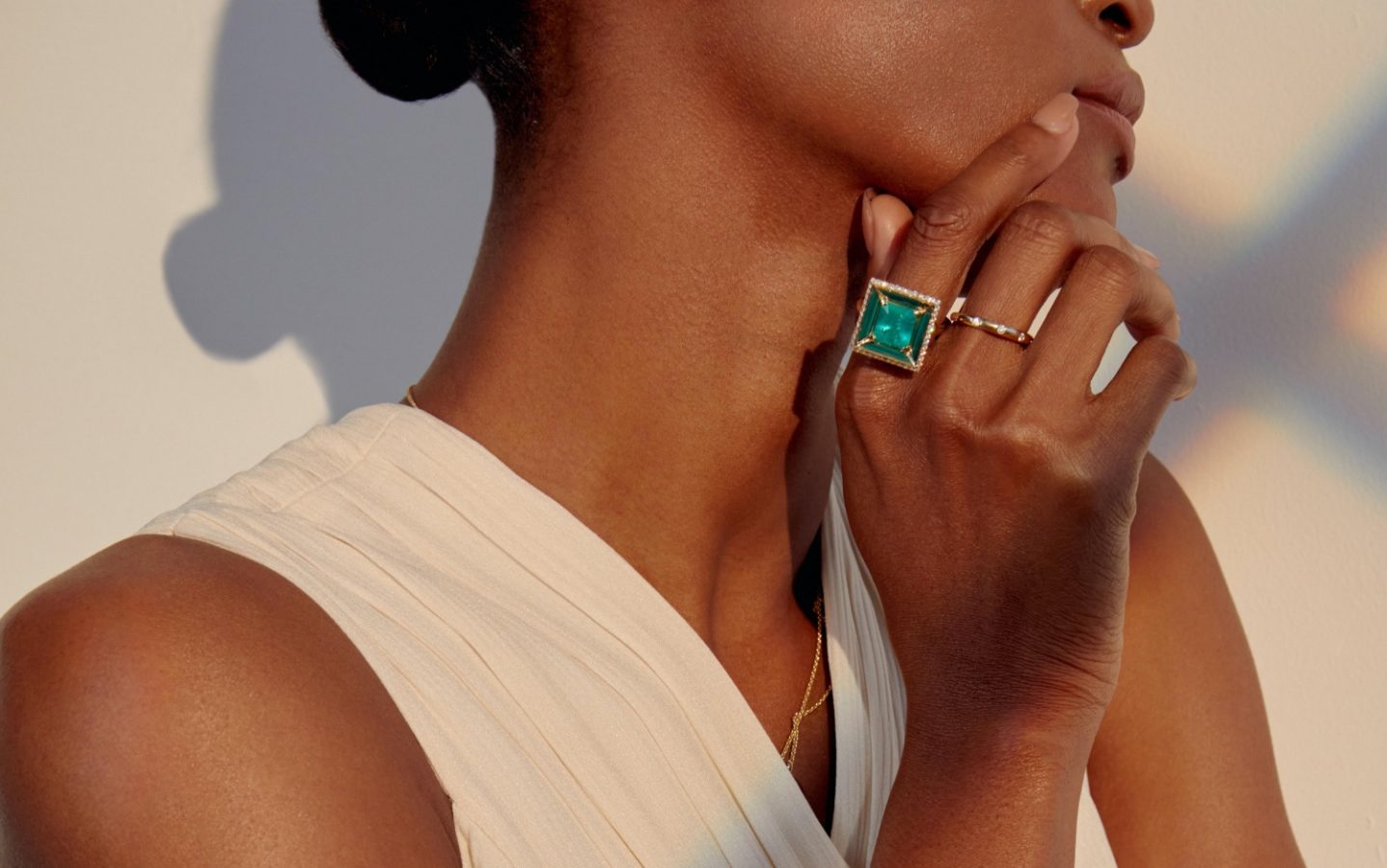 On the cover of Time magazine this February is poet Amanda Gorman, who made the headlines when she performed the powerful poem, The Hill We Climb, during the Inauguration Day ceremony for President Joe Biden and Vice-President Kamala Harris. Gorman’s impactful poem made an impression, as did the vibrant red headband that she wore around her braids. On the cover of Time, she’s wearing a choker styled as a tiara, in a portraiture that’s very much inspired by Maya Angelou.

The choker Gorman wore is none other than Khiry’s Khartoum Torc Embellished choker necklace, designed by the rising star designer Jameel Mohammed, whose afrofuturist vision and beautiful jewellery pieces that celebrate the culture and heritage of African diaspora is the brand to know right now.

“Jameel is an extremely talented designer, with his own unique point of view and style,” says Libby Page, Senior Fashion Market Editor at Net-a-Porter. “He uses inspiration from many different sources to form a collection that champions both diversity and change. As a global online retailer, we have the expertise to nurture brands and in this instance, we were able to introduce Jameel to three sponsors; Muzo, Hearts on Fire and The Betts Group who have consigned materials for the collection. This initiative is absolutely the first of many.”

For Page, the designers they’re looking for must have a distinct DNA and design aesthetic. “They truly have to be brands we are behind as a business and believe will resonate with our global customer,” she says.

Jameel, tell us about your very first jewellery design.

The first jewellery I ever made was in Legos when I was a freshman or sophomore in high school, and then I started making necklaces from knotted rope, macrame, and leather cord. The first piece that defined my brand KHIRY as an Afrofuturist luxury brand was the Khartoum Nude Bangle. That really set the tone for both my design signatures, as ongoing parts of the brands aesthetic, and our mission statement — our reason for existing.

Did you see design as a career from the beginning? What made you decide to study political science (as opposed to design/ fashion etc)?

Not from the very beginning. I actually, luckily, had an aunt who had a friend who had worked and made good money designing for other companies. As a kid growing up in the Midwest, art and creativity didn’t seem like tenable ways of actually sustaining yourself, but my aunt dissuaded me of that notion and said that I could make a living in that industry. Now to the reason I chose to study political science—and not design. At that early age, as I was preparing to take the reins of my own life, there were parts of me that were not comfortable with design being the only thing I could do or the only thing I would have the credentials for. The other part of it is that political science training was really instrumental in my ability to form complex concepts and synthesise distinct experiences, cultural traditions, and visions of the future into a singular expression. It gave me the historical background to understand the context for my work.

What is the meaning behind Khiry and what does Afro-futurism mean to you?

KHIRY is my middle name. It’s Swahili for extremes in fortune and health. To me Afrofuturism is about creating space in the present to envision the means by which Black people and culture will not only survive into the future but also achieve liberation, which is so much the fundamental project of Blackness internationally. It also imagines the broader context that that liberation would sit within—by imagining the liberation of black people you have to think about what kind of world would instantiate and support that liberation. For me it’s really important to spend time in the now thinking about how to design those outcomes in the future, and also reflecting on the past and how it has gotten us to this time and place.

Who and what inspires Khiry? Where do you turn to find inspiration?

I’m inspired by cultural production throughout Africa and its diaspora. I am particularly inspired by the generations of Black artists and activists who have gone before, because implicitly their work was aimed at creating space for themselves and their posterity.

I wanted to touch on the conversation you had with a white CEO who told you luxury brands were only born in Milan and Paris. How did it make you feel then? Did it discourage you or fuel you?

I think at that point it was mostly fuel. because to me it was so clearly and demonstrably false based on my actual experiences and I knew that there were huge swathes of other people out there who would find that sentiment equally ridiculous-and not just ridiculous but an expression of a cultural authority that has existed so long that it hasn’t been frequently questioned, especially in the minds of folk who wield that power. so in that moment it was clear that this was an opportunity from a business standpoint and that this was necessary from a cultural standpoint. and when those two things aligned, it was clear that there was nothing else that I wanted to do more than that.

Do you think luxury has changed since then?

Yes. I think historical luxury brands are increasingly aware that the world is changing and that people of all backgrounds are demanding that the institutions they support further the cause of equity instead of replicating the inequities of the past.

How does it feel to be part of Net-a-Porter’s Vanguard?

It feels great. It feels like a total affirmation of what I envisioned from that day [in Japan] of deciding what the brand would be focused on and seeing even then, at that initial stage, the potential that this could have to resonate with the world. I wanted to create pieces that were unquestionably, indisputably luxurious. And now: having the support of such a leader in the luxury space to introduce pieces in our Fine jewelry range which totally expand the brand’s offerings to the highest echelons of design fabrication is totally heartening.

Who would you love to see wearing Khiry? Why?

I think the conceit of the brand has always been to demonstrate to the world the breadth and the depth of culture and experience within the global Black diaspora. For that reason, we really love dressing folks from a broad array of backgrounds – we like to think of the brand as a place where an emerging artist can find a piece to celebrate their trajectory, or where an elected official can find a piece to signify their assent to office, and where there’s no contradiction: it can be the same piece. When I started out it was hard to imagine, but now we are lucky enough to count many globally prominent folks of distinct backgrounds as clients and supporters.

If you were not a jewellery designer, what would you be?

I don’t think I am a jewellery designer actually haha. I would lean further into one of the various creative pursuits that allowed me to explore jewellery and to build a brand in this industry. I’ve always drawn and used two-dimensional art as a way of expressing ideas; I’m also currently working on larger sculptural works, so maybe more three-dimensional works. I feel like if I wasn’t designing jewellery I would lean more into those directions, or maybe I would go to law school.